Some restaurants are known for their jaw-dropping views—others, their inspired decor or photo-worthy food presentation. Of all the characteristics that make an eatery singular, however, a simple, well-prepared dish can be enough to earn it a reputation within the local culinary scene. In fact, specialty dishes have become synonymous with restaurants’ names—and dining establishments are proud to hang their hats on the entrees that make them unique and draw customers to their tables day after day.

In such a trendy locale as Manhattan, visitors can expect to explore a culinary landscape primed by house specialties that run the gamut from exotic flavors and unique combinations to reinvented comfort foods and tried-and-true classics.

To help you select your next meal during an upcoming dining adventure, expert concierges at some of the top hotels in the city name local eateries and their most sought-after dishes.

The meatball sliders at The Little Owl are served on homemade garlic buns and have gained a reputation for being small but packed with flavor. The recipe is one that was passed down to owner Joey Campanaro by his grandmother Rosie Bova, and involves hand-rolling each meatball before frying it and cooking it slowly in tomato sauce. “If you say ‘The Little Owl,’ people always ask, ‘Did you have the sliders?’ … They’re so flavorful and just the right amount [of food] for a slider.” (thelittleowlnyc.com) —Jeanie Voltsinis, chef concierge at Viceroy New York

Marc Forgione, chef and owner of his eponymous restaurant in Tribeca, serves a dish he recommends for two called the Bell & Evans Chicken Under a Brick. The plate of poultry is dressed up with Yukon gold potatoes and broccoli rabe for a sensible combination that matches the comfortable ambiance. “[Forgione] is a great chef, and the brick-pressed chicken is definitely his signature dish.” (marcforgione.com) —Gunter Kleemann, chef concierge at The New York Palace 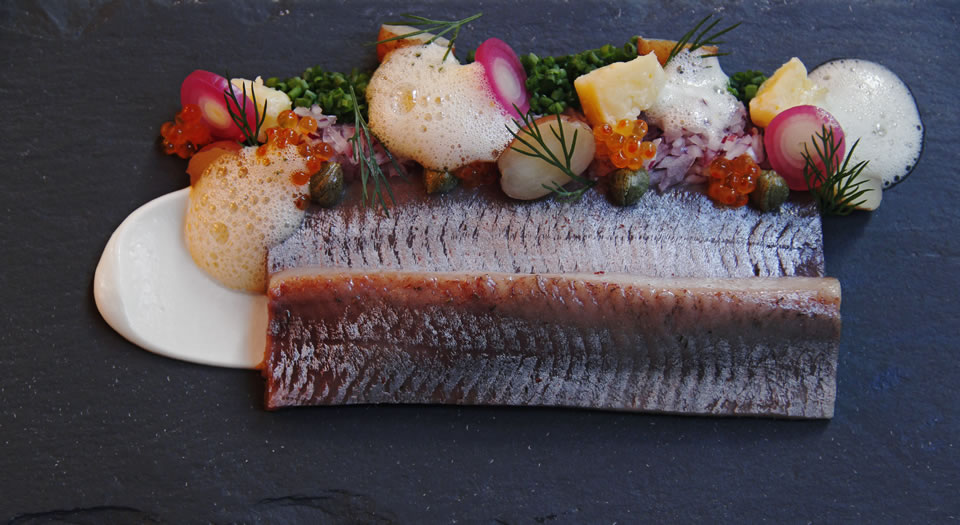 “Aquavit is a special restaurant because of its focus on traditional Swedish cuisine and, more specifically, the herring. A truly rich and unique flavor, herring adopts many flavors on Aquavit’s menu. When paired with great wine or with their signature flavored vodkas, the meal is definitely a different and worthwhile experience.” (aquavit.org) —Rafael Susana, concierge at The London NYC

Given the name of the place, it’s no secret that chicken cooked over an open flame is the dish that’s made Rotisserie Georgette famous. Roasted whole or half chickens are seared with an array of sauces and can be filled with wild mushroom for an appetizing meal. And the poultry is only the beginning of a menu that is based on the wholesome characteristics of rustic French cooking. Brass-trimmed rotisseries also turn out crispy potatoes and whole roasts like suckling pig, lamb and rabbit. (rotisserieg.com) —Waldo Hernandez, chef concierge at The Carlyle

By peering over the menu at DB Bistro Moderne, it’s relatively obvious which item is given special recognition at the French eatery owned by chef and restaurateur Daniel Boulud. The “original” DB burger is a sirloin hamburger stuffed with braised short ribs, topped with foie gras and black truffles, and sandwiched between a fluffy Parmesan bun—with “pommes frites” (french fries) served on the side. (dbbistro.com) —Josephine Danielson, chef concierge at Four Seasons Hotel New York

Listed under the “large” section of the menu, the lamb burgers at The Breslin come standard with French feta cheese, cumin mayo sauce and thrice-cooked chips. Although diners come from far and wide for the chargrilled sandwich, it’s just one reason to make the trip: The Breslin, a gastropub at The Ace Hotel, touts a Michelin star, and chef April Bloomfield took home a 2014 James Beard Award for the best chef in New York City. (thebreslin.com) —Frederick Bigler, chef concierge at The Peninsula New York

You wouldn’t immediately associate the ambience of a French brasserie with car and motorcycle racing, but owner George Forgeois seamlessly weaves the two ideas together at Cercle Rouge. Even the house special is unexpected: Deemed Cercle wings, the chicken wings complement the casual eatery and can be enjoyed as an appetizer for brunch, lunch or dinner. “[Cercle Rouge] makes the best chicken wings in the world. I’ve never tasted or seen anything quite like it. They’re phenomenal.” (cerclerougeresto.com) —Gunter Kleemann, chef concierge at The New York Palace

With a crispy, golden brown skin and a flag of herbs, the roast chicken for two at The NoMad undergoes precise preparation by Executive Chef Daniel Humm. The raw chicken arrives uncut at the restaurant to minimize the risk of torn skin, and a stuffing of foie gras, truffles and brioche is applied between the breast and skin. It’s presented to diners accompanied by freekeh, chanterelles and corn. (thenomadhotel.com) —Josephine Danielson, chef concierge at Four Seasons Hotel New York