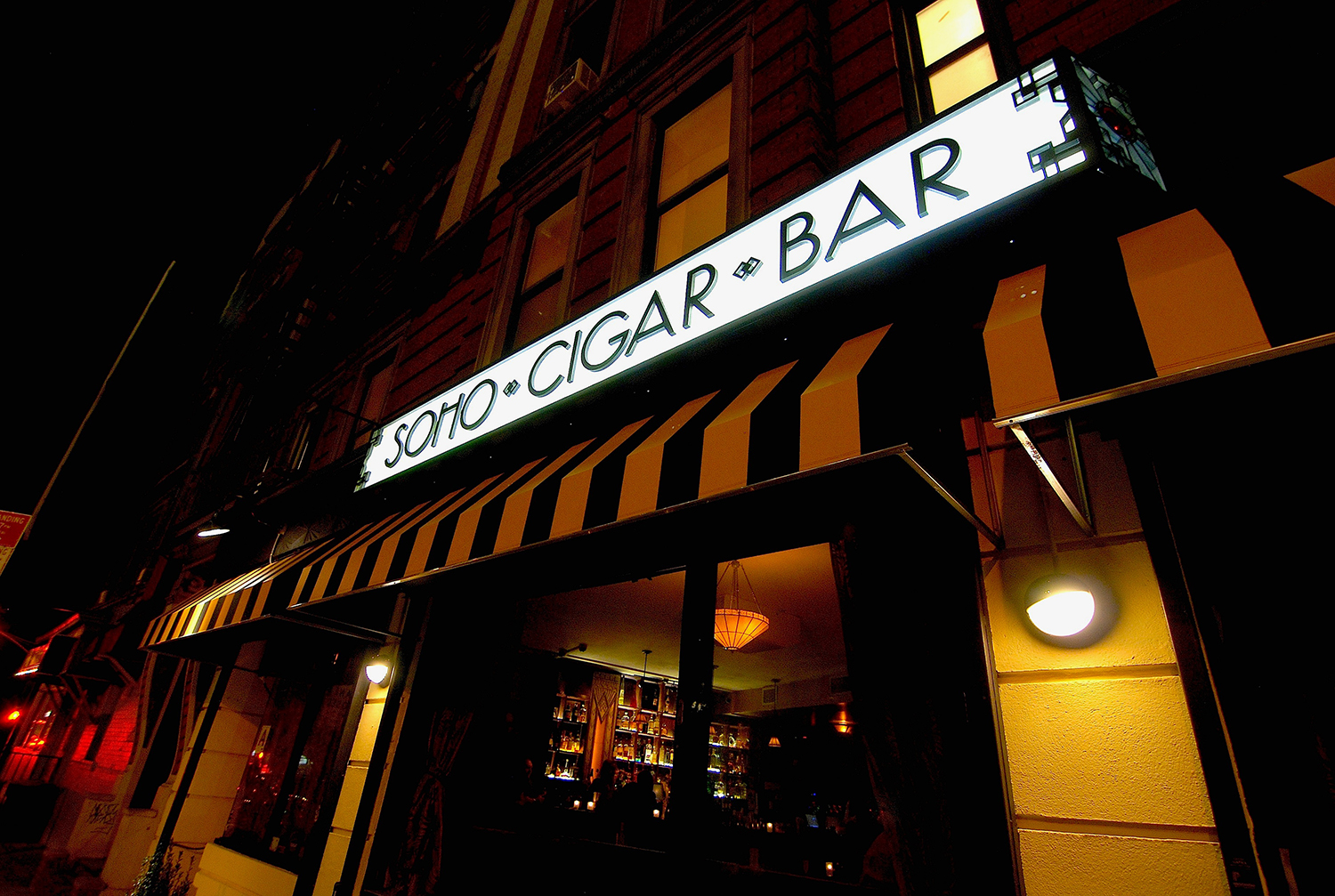 Across Manhattan, exclusive venues await nightlife patrons in search of a distinct experience in addition to quality food and drink.

Take a seat in a historical club as saxophonists and trumpet players slip into double-time, recalling the beats of the Jazz Age. Smoke creates an air of mystery as patrons puff on cigars and swap stories over glasses of whiskey at the storied Carnegie Club; some friends gather to shoot pool at a nearby hall that sees TV and movie actors now and then; and in Times Square, crowds erupt in a chorus of laughter as another comedian tests his wits onstage.

For a never-ending adventure in the city that never sleeps, head into the nightlife scene and explore themed lounges that will keep you entertained until wee hours of the morning.

Have the Last Laugh

One of the most famous comedy clubs in the city is located in the heart of Times Square at Carolines on Broadway. This funky spot caters to anyone looking to laugh from one of its 300 seats. Some nights beckon fans who find amusement in the antics of D.L. Hughley, while others draw those eager to delve into the sarcastic world of Janeane Garofalo.

For a more intimate experience, check out The Stand in Gramercy, where guests are treated not only to acts by top comics, but also inventive cuisine and craft cocktails during the show. “We provide what the scene had been looking for [for] years,” says Cris Italia, one of The Stand’s partners. “We’re an all-encompassing venue that not only has the best comedians performing every night, but we have an amazing menu created by chef Seth Levine and equally as amazing cocktails created by a top secret mixologist.” This cozy club opened in September 2012 and has since hosted seasoned comedians including Artie Lange, Jim Gaffigan and Judah Friedlander, along with some fresh faces like Adrienne Iapalucci and Monroe Martin.

On any given night, the club’s signature New Raj, a cocktail made with pepper- and lemongrass-infused gin, fresh lime juice, agave syrup, cucumber and basil, paired with the indulgent truffle macaroni and cheese are the perfect accompaniments to an amusing evening. “It’s a vibrant bar scene, so it’s always fun to hang,” Italia says. “And, we get to provide laughter to those who need it most.”

Turn Up Your Ears

Because of the city’s bustling theater and nightclub business, jazz has always had a home here, with venues dating back to the 1920s. Most of the innovative and famous jazz artists hailed from Harlem, a hot spot for all daring music lovers. At the time, the Cotton Club was the main joint to visit, and it’s still there—although swing, blues, gospel and Latin music now share the stage.

Another change is that most of today’s true jazz is increasingly common in Greenwich Village at places like Smalls Jazz Club and its sister venue, Mezzrow, an elegant piano bar, listening room and lounge. As a nod to history, the intimate space derived its name from Milton “Mezz” Mezzrow, a Jewish jazz player from Chicago who ran with all the greats including Louis Armstrong, Al Jolson and Bix Beiderbecke in the 1920s. Recently, the venue was endorsed by Steinway & Sons and now gifted musicians play one of the brand’s stunning instruments on stage. To secure a prime viewing spot, it’s best to book a table early, as seating is scarce.

One of the new places on the scene is Analogue, where comfort is found in the plush leather couches that allow guests to settle into a night of live jazz while sipping one of the club’s original recipes. The Queen Victoria, a cocktail composed of scotch, lemon juice, plum shrub and cardamom bitters, is among the drink options. Analogue showcases a diverse, up-and-coming array of talent such as Renaud Penant Trio and The Westet. While taking in the tunes from these musicians, let your eyes wander to the prints of jazz greats lining the walls. And, even if there’s no performer in house that night, patrons can still enjoy melodies emanating from a vintage 1960s tube-amplified record player.

For more soulful sounds, head to the Smoke Jazz & Supper Club to relax to the music of Annette St. John and her trio, Captain Black Big Band, Mike LeDonne’s Groover Quartet and a bevy of other experts worth checking out. Seven nights a week, they light the candles, fluff the velvet banquettes, dust off the sparkling chandeliers and polish the rich wooden bar for an evening of luxury, live music and American fare with Southern and Cajun influences. The first two shows of the night are mainly for those seeking dinner, though you can sidle up to the bar for a beer or glass of bourbon if you aren’t looking to dine. As for the meal, a prix-fixe option includes dishes like buttermilk fried chicken, blackened catfish and cedar-plank steak.

Light up a Cigar

Smoking may be banned in the city, but there are a few select spots where you can still ignite and enjoy a fine cigar indoors. Start in the Upper East Side at the 25-year-old Lexington Bar and Books, a classy venue where a dress code is strictly enforced. The clientele aren’t just passersby, but aficionados looking for a solid cocktail to imbibe while sampling the locally rolled smokes by Martinez Cigars, as well as other quality purveyors. The bar and lounge stay open until 4 a.m. for late-night revelers.

While Lexington Bar and Books remains an old school spot in the city, The Carnegie Club holds the title for the most stylish. Located in Midtown, a block from the famed Carnegie Hall, this comfortable, chic lounge offers all the amenities one craves from a cigar club, including plush leather chairs and sofas. Light snacks abound to complement a glass of Newton claret or the signature Carnegie Punch. And, of course, patrons can light up one of the curated collections of smokes such as Ashton Churchill and Davidoff Nicaragua Toro or the house cigar Robusto Maduro. Stop in during Sinatra Saturdays for a nostalgic moment: Singers croon favorite tunes by Old Blue Eyes while patrons sip classic cocktails and puff away.

Next, travel down the island to take a gander at Soho Cigar Bar. Settle into one of the leather booths and peruse the premium cigar and cigarette list. Cigars can be coupled with one of the bar’s many whiskeys, served in flights of three or a la carte. A full bar is also available; sample the specialty Champagne cocktails, perfect for washing down wholesome bites like the filet mignon wrapped in a croissant. The scene is chill, hip and elegant—the epitome of the venue’s neighborhood.

Chalk Up a Cue

At Amsterdam Billiards in Union Square, you might not be able to predict the crowd, but expect to have an exciting time shooting pool and playing darts, foosball or pingpong within the establishment’s wood-paneled walls. “On any given night, you might run into Eric Clapton, Bruce Willis or Alec Baldwin, or you might run into a local doorman, bus driver or electrician,” says Maria Leto, special events manager. The space stays open until 4 a.m. on Fridays and Saturdays, perfect for groups seeking a late-night activity.

The more serious pool players frequent Society Billiards and Bar in the Flatiron District for its 19 pristine Diamond billiard tables. Regular visitors to the city can participate in leagues that cater to any skill level; oftentimes, professional players are spotted at the tables late at night. Society’s low light and comfortable benches make hanging out here pleasant enough, but add a creative cocktail and duck BLT into the mix to elevate the experience to another level.