5 Food Halls Make a Comeback in the U.S.

Jul 20, 2015Bespoke Concierge MagazineComments Off on 5 Food Halls Make a Comeback in the U.S.Like

The latest culinary craze to hit urban areas across the United States is focused just as much on atmosphere as it is on the quality of the products sold. The food hall, that venerable establishment that brings to mind the spirited marketplaces of the early to mid-20th century, is making a comeback. With communal dining and an unparalleled sense of variety, they bring modern-day audiences face to face with artisanal products and the vendors who sell them. Although almost all of the country’s major cities now play host to distinctive food halls of their own, here are five you should add to your travel checklist. 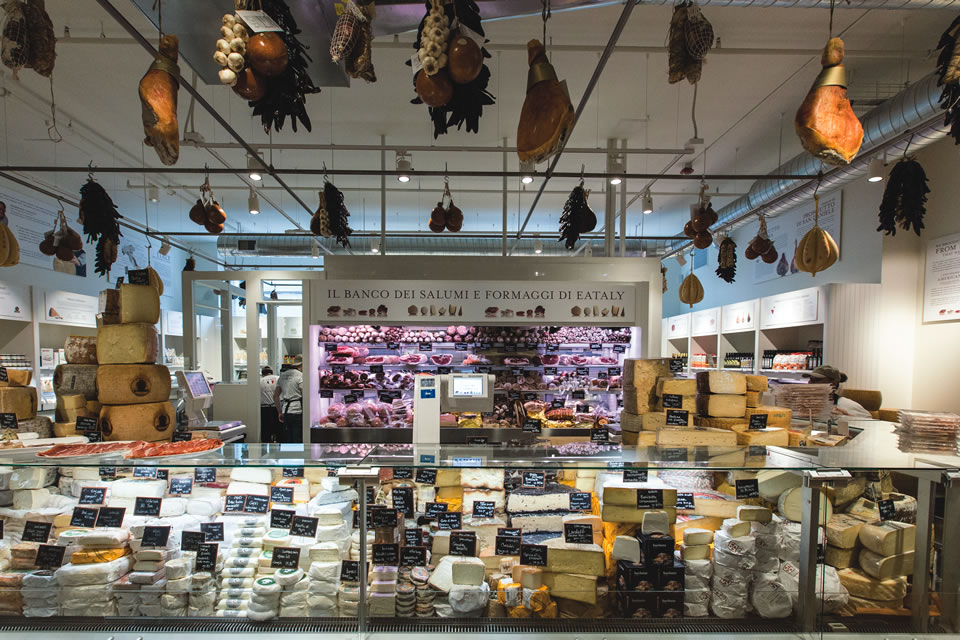 If one company can be credited with helping to spread the food hall movement to various cities, it just might be Eataly. One of 27 global stores in countries ranging from Japan to Dubai—the first of which opened in Turin, Italy, in 2007—Eataly Chicago is only the brand’s second location to open in the U.S. (a New York outpost debuted in the Flatiron District in summer 2010). And Old World ambience aside, the team behind the Chicago space includes thoroughly modern powerhouses like B&B Hospitality Group’s Mario Batali, Joe Bastianich and Lidia Bastianich.

Today, the 63,000-square-foot megamarket includes dedicated stalls for everything from bread, fresh pasta and house-pulled mozzarella to meats, cheeses, olive oils, seafood and even Italian cosmetics. In the style of a theme park like Disneyland, sprinkled throughout the property are a chefs’ classroom, wine shop and more than 20 “restaurants,” all of them owned and operated by Eataly but each coming complete with its own culinary staff and menu.

“We knew that what we wanted to build was not a supermarket, nor a restaurant,” says Raffaele Piarulli, Eataly Chicago’s general manager. “We wanted to build an experience. … I think Eataly played a big role in the increasing development of similar venues, but I also believe the food industry is simply tailoring its offering to meet the demand of the public. People want to eat better, and they’re more and more aware of how important it is to do so, and where you eat what you buy and buy what you eat makes quality awareness easier.”

To ensure that guests are consuming only the highest quality food products, Piarulli adds, Eataly Chicago’s stalls and restaurants source many of their ingredients from local and domestic vendors of produce, beef, cured meats, dairy and cheeses, many of them based throughout the Midwest.

Mondo Market stocks an array of cheeses and spices. (Photo by Christy Porter)

Opened in 2013, The Source is one of the centerpieces of Denver’s eclectic River North Art District, a creative enclave comparable to communities like Silver Lake in Los Angeles or Williamsburg in Brooklyn. Home to 15 local merchants, the market takes up residence in a repurposed brick foundry from the 1880s, and its bare-bones aesthetic reflects the space’s sense of history.

The market is just one of several projects from Zeppelin Development, a family-owned company that specializes in revamping buildings in former industrial areas of Denver, turning many of them into mixed-use properties that include living spaces, artists’ lofts and retail. The 25,000-square-foot Source may not offer residential housing, but its curated mix of artisanal food purveyors and craftspeople are emblematic of the developer’s repertoire.

At The Source, find highly specialized mom-and-pop-style outposts as well as restaurants like award-winning chef Steven Redzikowski’s Acorn, which serves shareable plates (think bone marrow and braised bacon) cooked over an oak-fired grill and oven, and Comida, a taco truck turned full-scale Mexican eatery. Before or after enjoying a meal, diners can stop by Babettes Artisan Bakery for fresh loaves of bread or sandwiches to go, Boxcar Coffee Roasters for one of the Rocky Mountain brand’s house blends, or Mondo Market for cheeses and spices. Crooked Stave and Proper Pour round out the offerings, giving guests access to locally brewed craft beer and small-batch spirits, respectively.

In addition, one of the most interesting aspects of The Source is its overwhelming commitment to supporting the neighborhood’s craftsmen. To that end, Zeppelin Development leases out a portion of the space’s rentable units to tenants like lifestyle photographer Jennifer Olson and Wunder Werkz, the graphic design firm that conceived The Source’s logo. And as if that weren’t enough, the building also houses the Denver chapter of the nonprofit Slow Food USA and Svper Ordinary, a contemporary art gallery.

Beyond dining, Stir Market sells gourmet goods and has its own line of spices. (Courtesy of Stir Market)

One of the newest food halls to hit the West Coast’s culinary scene, the boutique-style Stir Market launched this past fall in Los Angeles as a joint effort from chefs Jet Tila and Chris Barnett. Though it’s designed to mimic the more traditional food halls of yore, which pull together an array of outside vendors, Stir’s food stations—including an artisanal bakery, rotisserie stand, salad station and gourmet snack area—all fall under the purviews of Tila and Barnett.

Even though most of the food is made on-site, Stir sources select treats from outside vendors—think ice cream from nearby Coolhaus and espresso from Intelligentsia Coffee. “We also have a line of Stir Market gourmet products—sauces, spice mixes, rubs, brines—that are made in-house from our staff’s family recipes,” says Mimi Mok, one of the market’s co-founders. “Everyone has pitched in … and we’ve had fun with it.

“At a smaller scale, we wanted Stir Market to be a neighborhood market hall, where we could blend retail and dining in one bustling space and adapt it to the way people live today,” Mok adds.

In fact, Mok and the market’s founders originally took inspiration from food halls in Europe, including one of the seaside markets in Menton, France. “There were great cheese purveyors, butchers and a family that has been baking bread in the same oven for [more than] a century,” she explains. “… I think one of the appeals of Stir Market is the sense of community that has been created [from this inspiration].” 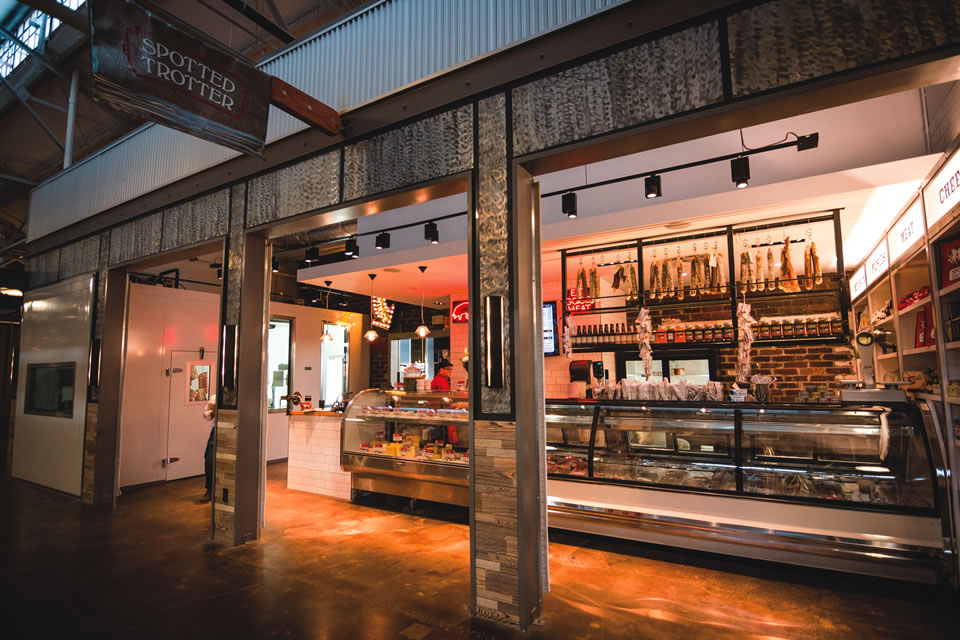 The Spotted Trotter is a butcher shop at Krog Street Market. (Photo by Barry Cantrell)

Atlanta’s historic Inman Park neighborhood provides a charming backdrop for Krog Street Market, a high-ceilinged space accented by reclaimed wood, exposed brick and plenty of skylights to let in the sun’s rays. The 200,000-square-foot building that has housed the market since its debut in November 2014 was once, among other things, a factory used to manufacture cast-iron cookware and the headquarters of filmmaker Tyler Perry’s studio.

Nowadays, though, the space boasts around 20 dining and retail tenants under the leadership of Paces Properties, a development firm similar to Zeppelin, the company responsible for The Source in Denver. Much like Zeppelin, Paces tends to cater to a very particular clientele, often unveiling projects that combine residential living and loft-style office spaces with gourmet dining and specialty retail.

Nowhere is this more evident than at Krog. Small-scale eateries like the popular Japanese fusion eatery Craft Izakaya, “Top Chef” alumnus Eli Kirshtein’s French-inspired restaurant Luminary, the charcuterie-heavy Cockentrice and an ode to Tex-Mex called Superica mingle alongside storefronts that sell goods, such as the butcher shop The Spotted Trotter and a small-batch chocolate purveyor.

Like most contemporary food halls that have sprung up over the past two years, Krog also offers a handful of traditional grab-and-go stalls, but these aren’t your average vendors. At Fred’s Meat & Bread, diners are less likely to find raw steaks and loaves of sourdough than they are to come across treats like banh mi sandwiches and authentic po’boys. Just steps away at Yalla, guests will discover Middle Eastern delicacies such as kebabs and falafel, and at the recently opened Spice Road, acclaimed chef Asha Gomez—whose restaurant, Cardamom Hill, recently shuttered after two years of critical acclaim—serves up a menu of creative chicken dishes. 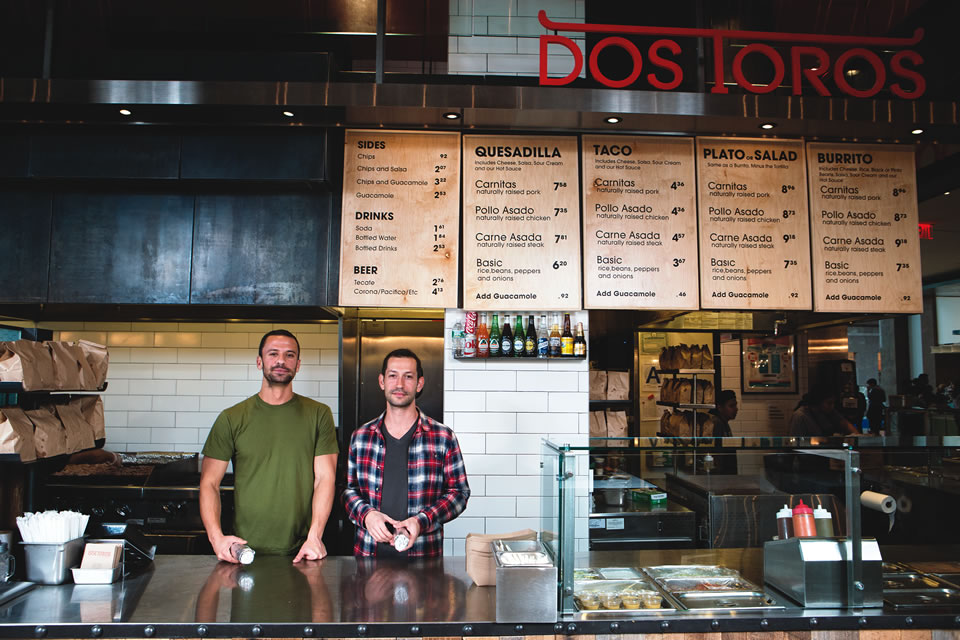 Tucked inside Brookfield Place—a multiuse complex bordered by the Hudson River and the World Trade Center site in Manhattan’s Financial District—is Hudson Eats, a modernized play on the food court that showcases a range of artisanal eateries.

“Brookfield did a great job of selecting restaurants, and they’ve created a dining selection with very little overlap,” says Micha Magid, one of the three friends behind Hudson Eats’ award-winning Mighty Quinn’s Barbeque, a Southern smokehouse that currently operates six locations throughout Manhattan, Brooklyn and New Jersey. “Hudson Eats is becoming a destination. Locals and tourists have been discovering our brand for the first time, and as a relatively young brand, you can’t ask for much more than that.”

One of the keys to Hudson Eats’ success, Magid continues, is its emphasis on choice: Diners can opt for fresh sushi from Blue Ribbon, street tacos from Dos Toros or noodles from Northern Tiger. The specialization of the space’s vendors, he contends, is what keeps Hudson Eats competitive and the food hall trend afloat.

“The food hall concept has become popular as more restaurants and chefs have created concepts that are really good at doing one thing very well,” he adds. “So, as menus have become more streamlined, it’s a natural evolution to aggregate these great specific concepts into one venue. You’re going to see more of these sprout up in other cities.”