From the tranquil shores of South Beach to the cultured shops of Bal Harbour, Miami is establishing itself as one of the world’s new film capitals.

Visitors to Miami are exposed to a multicultural and architectural tapestry. From the treasured art and downtown historic districts, grand shopping plaza in Bal Harbour and the immense Adrienne Arsht Center for the Performing Arts to the sandy beaches and iconic skyline, there’s much to see and do in this coastal locale.

For all these reasons—and more—Miami has attracted much attention from the film industry over the years. Movies and television programs that are filmed in Miami are bringing a new kind of vitality that is showing no signs of slowing down.

“We have some of the most up-to-date sophisticated infrastructure in terms of camera, lighting, grip equipment and post-production utilization,” says Graham Winick, the film and event production manager of tourism and cultural development for Miami Beach. “I would put our crews against some of the best in the world, including inside Los Angeles.”

The singular identity of Miami is one of the biggest draws for the film industry’s elite. More than 121 countries are represented in the city’s population, and that strong cultural diversity along with a picturesque location add to Miami’s allure, making it a premier destination for motion picture production.

“We truly appreciate our architecture, our art, our culture and our landscapes,” Winick adds. “So the fact is when you have this urban oasis that respects its identity … history and … culture, all on the beach, it’s kind of a unique setting. You don’t really see that too much around the world.” 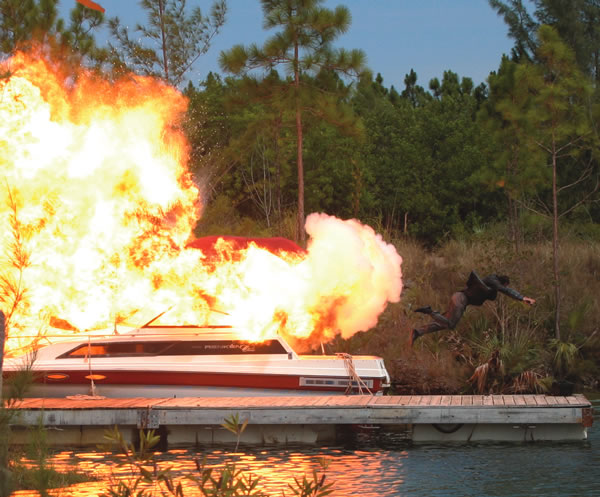 One of the first major catalysts responsible for launching Miami on the entertainment industry map, leading to its ever-evolving presence on the big and small screens, was the hit 1960s variety television series, “The Jackie Gleason Show,” Winick says. The network show was taped at the Miami Beach Auditorium on Washington Avenue, a venue later renamed and now known as the Fillmore Miami Beach at Jackie Gleason Theater.

“Every week, the live television shows produced here on CBS would say, ‘Live from beautiful Miami Beach, the sun and fun capital of the world,’ and that certainly put the area on the map,” Winick explains. “So our community leaders from early on recognized the value of this industry.”

Miami also served as a cinematic home to the legendary Frank Sinatra when he filmed the Tony Rome detective movies, “Tony Rome” (1967) and “The Lady in Cement” (1968). It later became an important setting in “The Godfather Part II” (1974) when movie audiences enter the residence of the aging gangster Hyman Roth, played by Lee Strasberg. In 1977, The Orange Bowl stadium became a target of terrorism in John Frankenheimer’s “Black Sunday,” based on the first novel by “The Silence of the Lambs” author Thomas Harris.

Another iconic Al Pacino film that brought Miami into the cinematic limelight was Brian De Palma’s “Scarface”(1983). In order to capture the city’s passionate, dynamic flavor, this gangster epic was filmed on the historic Collins Avenue as well as various residential neighborhoods in South Beach. A film consultant—Manuel Diaz, who became the mayor of Miami in 2001—was even brought in to help the filmmakers understand the specific subtleties of Miami Beach’s cultural diversity.

But as Winick explains, there were two key events in the 1980s that ultimately triggered big changes in the Miami film industry. “… There was a big movement in fashion photography—to recognize the value of Art Deco and the beauty of Art Deco as a backdrop, with gorgeous modern models—which was propagated by Andy Warhol and Bruce Weber, in particular,” he says. “And then, of course [director/producer] Michael Mann coming down and producing ‘Miami Vice,’ the television series—that really kind of gave a color palette, an identity to who this area was. And that really started a revolution that has continued to this day.” 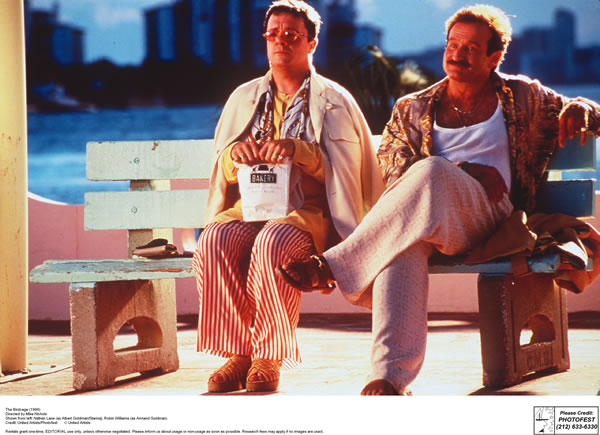 Miami and all of its accompanying neighborhoods serve as a cinematic magnet for the action film genre. Notable pictures filmed locally include box office blockbusters “The Specialist” (1994) starring Sylvester Stallone, “Bad Boys” (1995) and its 2002 sequel starring Will Smith and the big screen version of “Miami Vice” (2006) with Jamie Foxx and Colin Farrell.

The James Bond franchise has also played a starring role in the local film scene. The famous swimming pool scenes in “Goldfinger” (1964) in which the villain cheats at were filmed at a local hotel; meanwhile, Miami was saved by Sean Connery’s Bond in “Thunderball” (1965) when he joined the U.S. Coast Guard and CIA after they parachuted off the Miami Coast and into an underwater battle. Most recently, a stretch of the Interstate 395 between the MacArthur Causeway and Interstate 95 in Miami can be seen in 2006’s “Casino Royale”—proving that the city has a profitable, long-term relationship with this legendary film series.

Miami has also shown its humorous side with a handful of memorable comedies. The elegant, picturesque village of Bal Harbour was home to “Miami Rhapsody” (1995) as well as the gangster comedy starring Robert De Niro and Billy Crystal, “Analyze This” (1999). The St. Regis Bal Harbour Resort stands on the site where the memorable first wedding scene took place—the former hotel has since closed.

Visitors in Bal Harbour will recognize the famous Bal Harbour Shops in “Miami Rhapsody,” an addition brought about by director/screenwriter David Frankel. “[Frankel] really infused it with a sense of local pride in some ways,” Winick says of the film. 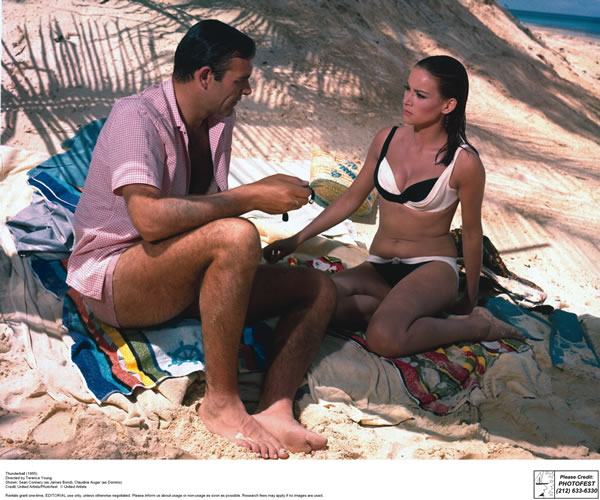 Although movies taking place in Miami have increased the city’s popularity worldwide, there are very few films that somehow capture its overall character, the multicultural flavor and its extravagant charm. The two films that Winick believes best harness the city’s true spirit are derived from novels written by authors whose detailed descriptions paint a vivid, colorful picture of Miami for readers.

Written by Charles Willeford in 1984, “Miami Blues” was brought to the big screen by director George Armitage in 1990. The movie used locations across Florida, including the old Parrot Jungle theme park at Pinecrest Gardens, the Venetian Pool in Coral Gables and the Omni District in downtown Miami.

“It’s very hard to find something that so perfectly captures south Florida,” Winick says of Willeford’s novel and the film. “You feel like a local when you read those books. … There’s so much charm to that movie and I think [it] still holds up.”

It was Steven Soderbergh’s crime caper “Out of Sight” (1997), however, that the reveals all of the cultural layers of urban Miami. The movie is also considered one of the best film adaptations of an Elmore Leonard novel.

“Elmore Leonard as a crime novelist has such a unique voice that I think it’s hard for any filmmaker to capture him regardless of the setting,” Winick says. “It certainly is, in some ways, a love letter to South Florida.”

In Miami Beach, “Out of Sight” was filmed in the Collins Park historical neighborhood; some of the historic buildings in that area that would be familiar to film aficionados, including the Collins Park Hotel, have since fallen victim to arson and are no longer there.

“Soderbergh has developed a love affair with this area overall,” Winick says. “Those warm inviting scenes where [George] Clooney and [Jennifer] Lopez meet and fall in love together are so great, especially in contrast to how freezing cold and miserable Detroit looks.”

Winick says that 2013 is a promising year for Florida overall, especially with numerous television shows being shot in Miami. The USA Network hit series “Burn Notice” is finishing its seventh and final season while other shows continue to flourish. “The Glades,” which is set in Broward County but is moving down to Miami Beach soon, is wrapping its fourth season, and “Magic City,” a Starz dramatic series that focuses on local mobsters during the 1950s, will air its second season in June. Two new series are now scheduled to film in Miami Beach: an untitled NBC series based on an Elmore Leonard story and a sports-themed HBO show starring Dwayne Johnson.

With these promising projects, as well as many others, there is no doubt that Miami continues to solidify its place as one of the glamorous film capitals of the world.

Explore a few iconic landmarks that helped put Miami on the cinematic map.

Ocean Drive: On this signature road lined with gigantic palm trees, films and scenes shot here include: “Random Hearts” (1999), “The Birdcage” (1996), the exterior gunshot attack after the infamous chainsaw scene in “Scarface” (1983) and “Miami Rhapsody” (1995).

Collins Avenue: Filmed in this historic neighborhood were “Goldfinger” (1964), “Out of Sight” (1997; Collins Park), the pool scenes with Al Pacino and Steven Bauer in “Scarface” and the AIDS charity benefit in “The Bodyguard” (1992).

MacArthur Causeway: This monumental stretch of highway was used for dynamic chase scenes in “Bad Boys II” (2003) as well as the famous bench scene in “The Birdcage,” where part of the road was converted into a bus stop in order to obtain a more majestic view of the Port of Miami.

Villa Vizcaya in Coconut Grove: This Mediterranean mansion—now known as the Vizcaya Museum and Gardens, once owned by industrialist James Deering—has been used as James Stewart’s mansion in “Airport ’77” (1977), the Mandarin’s lair in “Iron Man 3” (2013), a party venue in “Any Given Sunday” (1999) and a drug lord’s home in “Bad Boys II.”

Previous PostA Taste of the Sea Next PostAspen’s Summer Playground