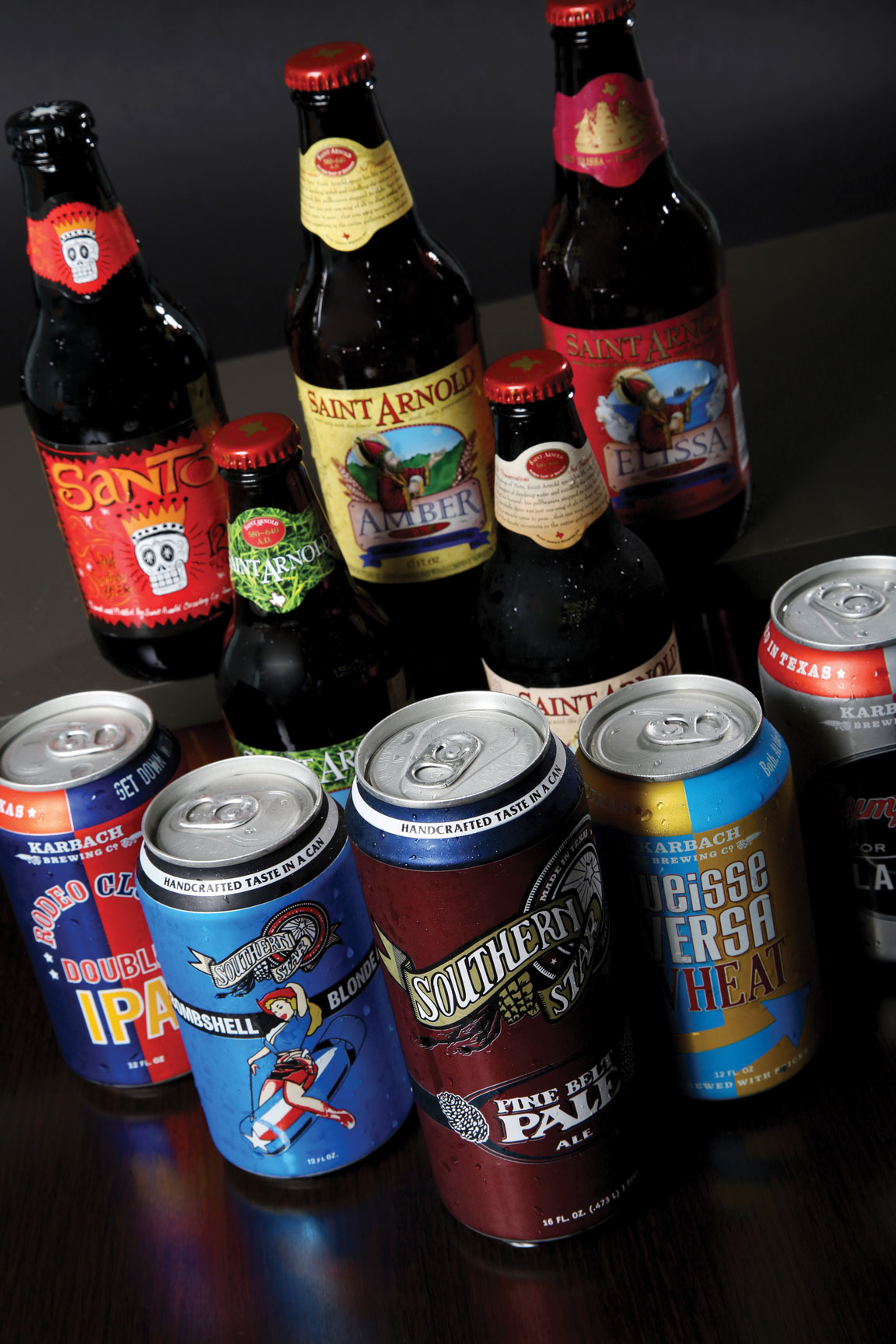 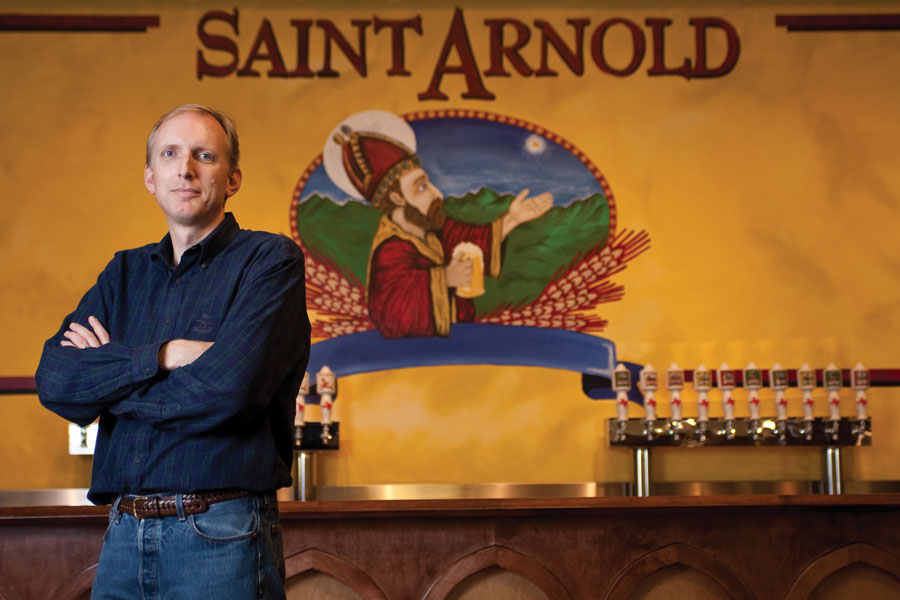 Brock Wagner doesn’t think of himself as a pioneer; he’s just a guy who began making home-brewed beer as a Rice University student before turning his hobby into his profession. Now, Wagner is practically revered among the growing population of entrepreneurs making and selling craft beers in the Houston area. When Wagner, 47, opened the Saint Arnold Brewing Co. in 1994, the general beer drinking public didn’t know craft beer from a bowl of Beer Nuts.“Brock did all the legwork for every body in Houston now brewing craft beer,” says Dave Fougeron, president and brewmaster of the Southern Star Brewing Co. in Conroe. “He had the hard task of turning people on to beer that isn’t Bud Light.”With Houston in the midst of a renaissance in craft brewing—three breweries have jumped onto the bandwagon over the past four years—Wagner’s company serves as the model for how to take a passion for high-quality beer and turn it into a profitable business. But success was anything but guaranteed for Wagner when he shipped his first keg of Saint Arnold Amber Ale.“The atmosphere then is best described as challenging,” says Wagner, Saint Arnold’s founder and brewer. “People didn’t know what craft beer was. We spent the first 10 years educating people and we still do that, but today’s audience comes in receptive to craft beer.”

Saint Arnold’s and the three new craft breweries—Karbach Brewing Co., No Label Brewing Co. and Southern Star—all posted impressive sales figures in 2011 and are on pace for a prosperous 2012. While craft beer has been popular for years in several other areas of the U.S., including Colorado, the Pacific Northwest and California, Houston has been slow to belly up to the bar.

According to the Brewer’s Association (BA), 2011 saw the percentage of market share claimed by craft beers reach 5.7 percent by volume and 9.1 percent by dollars, while retail dollar value collectively for the roughly 1,940 U.S. craft breweries totaled $8.7 billion, up from $7.6 billion in 2010. BA figures show the craft brew segment of the $98 billion U.S. brewery industry grew by 1.3 million barrels last year, representing a 13 percent rise in volume and a 15 percent rise in retail sales. Craft beer’s increase in sales came despite an overall 1.3 percent drop in beer sales in 2011.

With their intriguing variety of flavors, freshness and enhanced alcohol potency, it appears craft beers are here to stay. 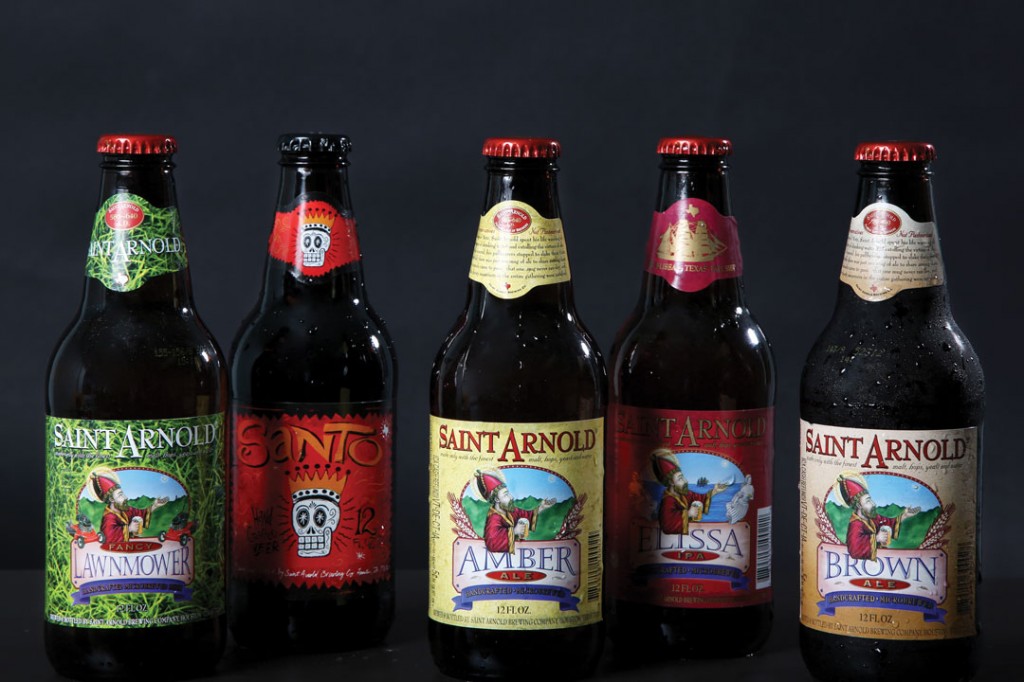 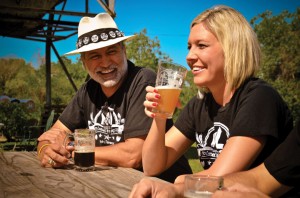 In the early days, Brock Wagner’s distribution plan consisted of him going pub to pub to sell Saint Arnold beers. He says many pub owners were surprisingly receptive to selling his Amber Ale, with its rich, malty body, caramel character and hint of floral and citrus, but getting patrons to order it was not easy.

“We had no brand awareness, and when people had heard of our beer, they usually thought it was an import,” Wagner says.

Saint Arnold produced an initial run of 600 barrels its first year, when it was just Wagner, who managed distribution and one other employee. Focusing strictly on selling in Houston pubs, restaurants, grocery stores and liquor stores, it wasn’t until 2002 when he says he felt the company had gained a foothold.

“The biggest challenge is always making great beer and getting people to try it. Quality of ingredients changes from year to year, so consistency is the goal. With wine, people expect it to taste different every vintage. With beer, people want it to taste identical, but it’s an agricultural product just like wine,” Wagner says. 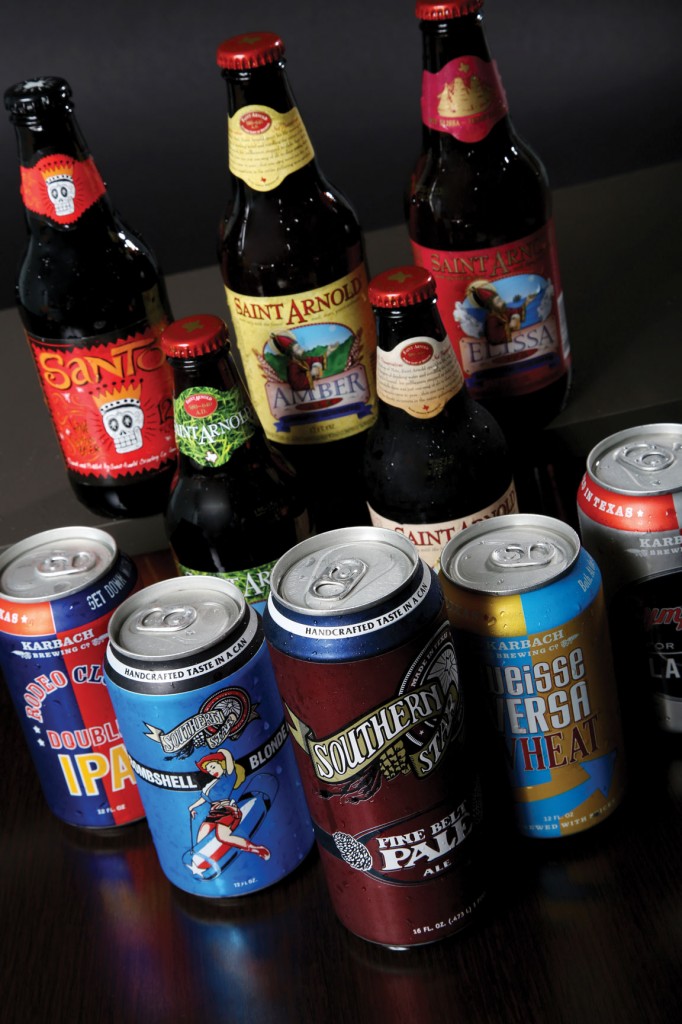 The brewery, with 40 employees now, began distributing in Louisiana nearly two years ago but has no plans to expand into other markets. Wagner appreciates the respect he receives from his fellow hometown brewers, but he doesn’t feel like a trailblazer.

“It’s been a labor of love,” Wagner muses. “I remember when we struggled to get 15 people to take our brewery tours, but now we average about a thousand people for our Saturday tours. It’s funny to see the new breweries open up and have a couple of hundred people on their tours. We joke that we should get a royalty on that.”

Karbach’s brewmaster Eric Warner initially oversaw the production of about 100 kegs of its Hopadillo IPA, followed immediately by the Weisse (pronounced “Vice”) Versa Wheat and the Rodeo Clown Double IPA. The brewery has added its Sympathy for the Lager offering to the lineup, along with seasonal beers including the Barn Burner, a Belgian farm style brew.

Karbach’s craft beers are highly distinctive: There’s the bold, citrusy overtones of the Weisse Versa Wheat; the hoppy crispness of the Hopadillo IPA; the somewhat bitter, high octane (9.5 percent alcohol by volume) intensity of the Rodeo Clown Double IPA; and the light, clean finish of the Sympathy for the Lager. All of these are now available at more than 300 bars, restaurants, grocery stores and liquor stores in the Houston area.

“Craft beers are getting the attention of the big brewers, with some of them making craft-esque beers and some buying craft brewers to add to their portfolio,” says David Graham, the brewery’s marketing manager. “They saw it as a fad at first, but they’re now on their toes to address the desire for small batch beers.” 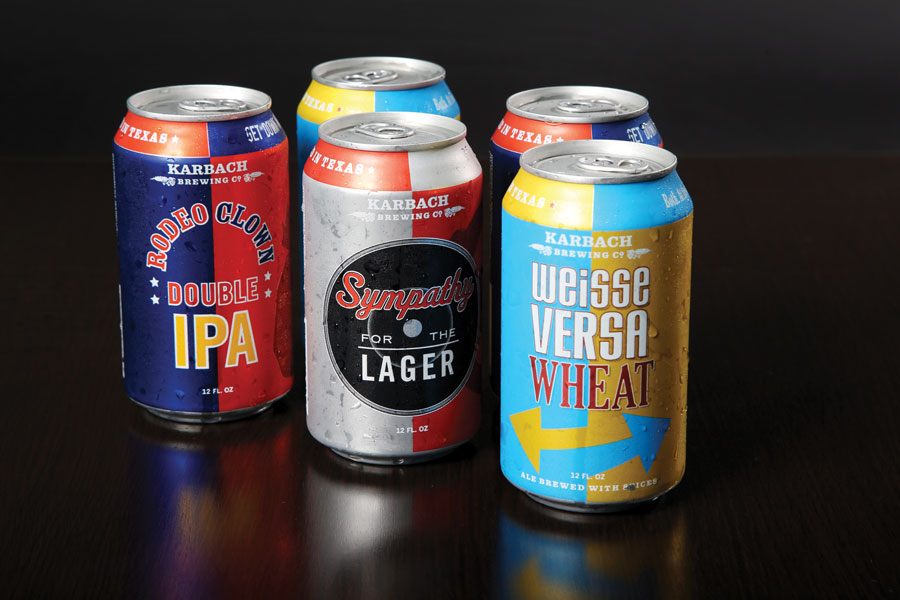 After graduating from Texas A&M with a degree in wildlife fisheries science, Dave Fougeron, Southern Star Brewing Co. president and brewmaster, realized work in his chosen field would be hard to come by, so he made his home brewing hobby his vocation. “I started out home brewing while in college, and it turned out I was decent at it,” Fougeron says.

Fougeron was the head brewer at Saint Arnold in 2007 when he left to start Conroe-based Southern Star Brewing Co., which sold its first beer in 2008. While its Pine Belt Pale Ale was the first beer Southern Star produced, the Bombshell Blonde Ale, which appeared in the fall of 2008, put the brewery on the map thanks in part to its kitschy packaging featuring a blue can with a cartoon blonde in red cowboy hat and boots astride a red, white and blue “bomb,” but mostly because of its clean finish, golden color and a taste that includes hints of yeasty bread and hops.

Fougeron says Southern Star was the first craft brewer in Texas to sell its beer in cans, but while the cans helped establish a niche in the market, and shield the beer from the damaging effects of light, they weren’t perceived as a plus by everyone.

“It was a hard sell at first,” he recalls. “I remember going into this pub that was a ’50s-style diner and was kind of trashy looking. I asked the owner if she would sell our beer, and she said, ‘Cans? We only sell bottles in this establishment!’ I just laughed and left.”

The Pine Belt and Bombshell Blonde beers are joined in the year-round lineup by the Buried Hatchet Stout. The brewery, which produced 336 barrels in its initial run, expects to top 8,000 barrels this year after selling more than 5,100 last year. With a workforce of 10 now, Fougeron says the company expects to reach $2 million in revenue in 2012. 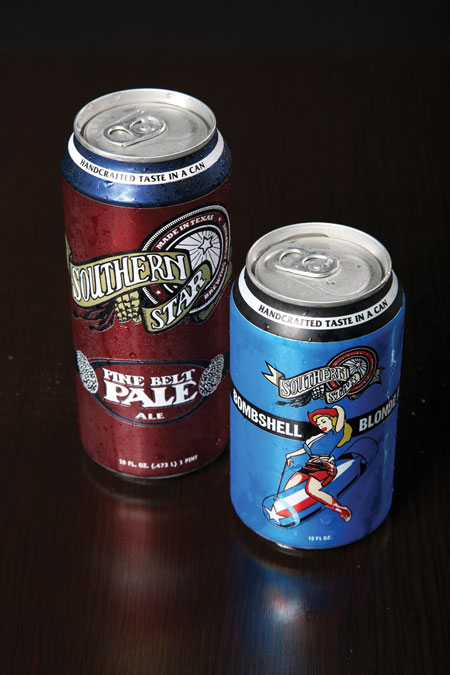 No Label, No Problem

From their modest facility in Katy, Brian and Jennifer Royo, No Label Brewing Co. co-owners, have seen sales of their beers skyrocket since opening a little over a year ago. With financial backing from family members, including Brian’s parents, Brian, a dedicated home brewer, was able to quit his job as a construction company project manager to focus on brewing.

Brian Royo says the company has three full-time employees and will move into a new, larger space in the next year. The brewery also plans to begin bottling their three year-round lines: the El Hefe German-style beer, the Pale Horse Pale Ale and the Ridgeback Amber Ale. Seasonal offerings include the spicy Don Jalapeno Ale, the Black Wit-O Dark Wheat Ale and the Elda M. Milk Stout. No Label beers are available in more than 160 bars and restaurants primarily in Houston, the Dallas-Fort Worth area, Austin and San Antonio.

“Craft beers are more popular because there’s more education out there on the types of beer, and because lots of people are starting to pay attention to how things are made and care about supporting local businesses,” Brian Royo says.With about 11 breweries in planning in the Houston area over the next several years, according to the Brewers Association, heady days are ahead indeed for Houston beer lovers

According to the Brewers Association, a craft beer has to meet three criteria: It must be small, independent and traditional.

Small: A craft brewery has an annual production of less than 6 million barrels.

Independent: Less than 25 percent of the craft brewery can be owned or controlled by an alcoholic beverage industry member who is not themselves a craft brewer.

Traditional: Refers to a brewer who has either an all malt flagship (the beer that represents the greatest volume among that brewer’s brands) or has at least 50 percent of its volume in either all malt beers or in beers that use adjuncts to enhance rather than lighten its flavor.

Taking a tour is a great way to sample craft beers produced by local breweries and learn how the beers are made.

When: Saturdays 1 p.m. to 3 p.m. (except the first Saturday of each month)

Visit the best pubs in the area to sample locally made craft beers.