A Flavorful Union of Beer and Food

Sep 01, 2014Bespoke Concierge MagazineComments Off on A Flavorful Union of Beer and FoodLike

India pale ale goes well with red curry dishes and Russian imperial stout is wonderful to drink with chocolate cake, among countless other examples. The concept of beer and food pairings isn’t unique to those who make craft beers, but only in the last several years have many of the country’s best restaurants started to take notice.

“I like to say craft beer picks up where wine leaves off, and then some,” says Julia Herz, craft beer program director for the Boulder, Colo.-based Brewers Association. “Wine has acidity, fruit, mineral components, tannins and alcohol. When paired, wine mostly hangs its hat on its acidity (by calming fat and salt in food, so the flavors shine brighter).”

Likewise, craft beer has acidity and bitterness from hops, which calm a food’s richness and residual sugar, she says. The beer’s carbonation also scrubs the tongue. “This gives the beverage major game in the food flavor harmony arena,” Herz says.

It appears that the trend isn’t slowing down; with more chefs realizing the potential that these pairings have to take cuisine to the next level, the epicurean experiences are endless. 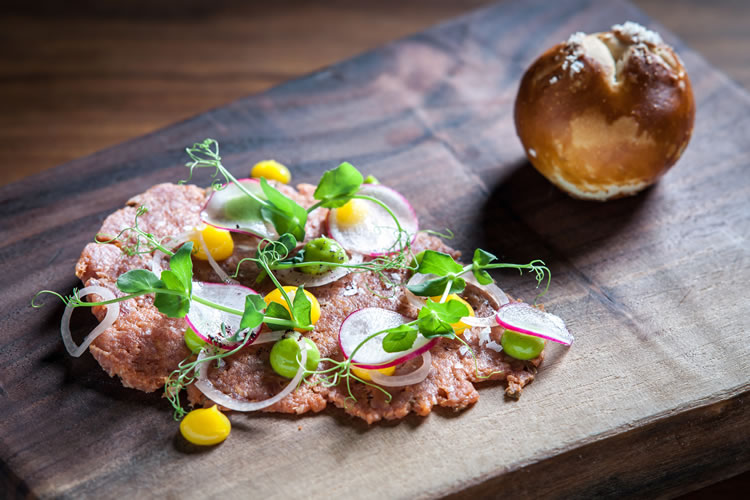 New York City restaurant Hospoda,  features dishes Infused with beer, prepared with the ingredients used to make beer or inspired by a flavor profile of a particular beer. “About seven years ago, I had my first beer pairing in a restaurant, and it blew me away,” recalls Hospoda’s chef, René Stein. “I started my culinary career in Germany, where I’m originally from, and had never seen anything like that before.”

One of Hospoda’s dishes pairs beef tartare with Pilsner. “In terms of beef tartare (made with chive mayonnaise, egg yolk and a pretzel bun), I wanted this dish to really show off the incredible craftsmanship of [Prague brew] Pilsner Urquell,” Stein says. “The beef tartare we serve at Hospoda is a more elegant interpretation of a typical beef tartare, but it doesn’t overshadow the Pilsner Urquell. It complements it and even shows off how great it is.” 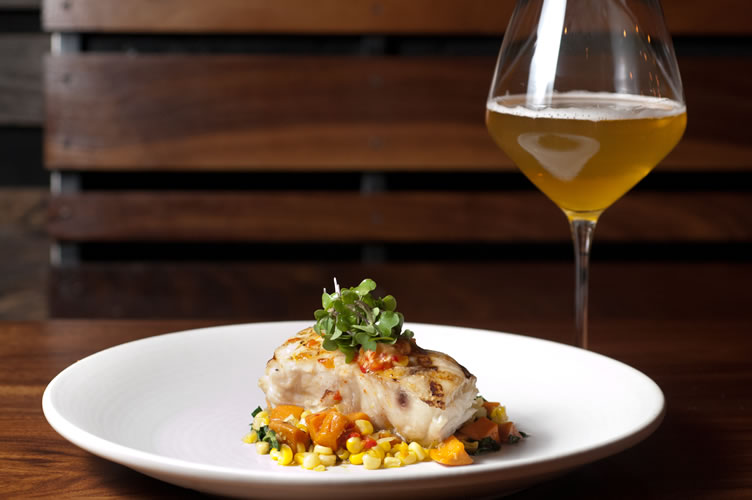 Sea bass is paired with Brewery Ommegang’s Duvel Rustica at The Abbot’s Cellar in San Francisco. (Courtesy of Katherine Sacks/starchefs.com)

When it opened in 2012, The Abbot’s Cellar showed the culinary community exactly how craft beer could bring another dimension to fine dining. Here, guests can savor food-and-beer pairings that include Belgian-style dubbel with duck, saison with scallops and stout with steak. “It’s the experience,” says chef Adam Dulye. “Once people have that ‘aha’ moment with pairing beer and food, they open up their palates to a whole new world.”

Chef Bob Hurley of Hurley’s Restaurant in Yountville, Calif., says some people find it ironic that his establishment—set in the heart of Napa Valley—offers beer and food tastings. But, he adds, they quickly see how well the two go together.

“In wine, you must be very aware of the balance of sugars, acids and alcohol,” Hurley explains. “For the most part, that eliminates pairings with a whole range of ethnic foods that accentuate sour, sweet, saltiness or spiciness. This is where beer shines.”

Like other chefs, Hurley says the wide complexity of flavor offerings makes beer the perfect drink with food. “In wine pairing, after you have dealt with the balancing act in your dish, you add ingredients that will complement the wine and pull out the many nuances and flavors that lie hidden in the complex layers of wine,” he says. “With modern-day microbrews, there are a whole new set of flavors and nuances to work with that there were not in the past.”