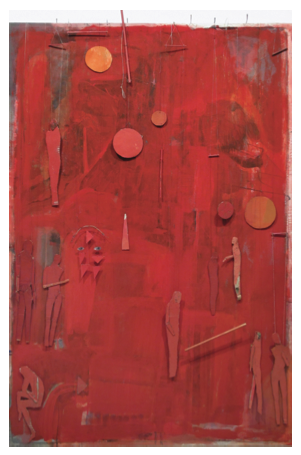 Artists on the Rise

The talents of four emerging New York artists have captured the attention of the global art world.

Every spring, excitement mounts in New York City for art collectors and enthusiasts alike as a series of international art events kicks off, beginning in March with the Armory Show, combined with exhibitions such as Scope New York, Pulse New York and Volta NY. Coinciding every other year with the Whitney Biennial (which took place in 2012 from March 1 through May 27), these events bring the art world to one of its major cultural centers, giving visitors the opportunity to witness mass displays of works from iconic artists and emerging talent around the world.

Although works by well-known artists are one of the major draws of these events, by far the most exciting to watch are artists in new and midlevel stages of development, whether in painting or sculpture, photography or multimedia, installation or performance. “It’s a good time to take an interest in artists who are at the early or evolving points in their career, to see how they’re developing and what may be the future of their work,” says Elisabeth Sussman, senior curator at the Whitney Museum of Art and co-curator of this year’s Biennial.

While emerging artists around the world are contributing to the pool of growing talent, those who live and work in New York City hold a particularly special place as members of its thriving art scene—here are four worth watching.

In group shows since his Museum of Modern Art (MoMA) PS1 debut in 2000, the Stuttgart-born, NYC-based artist’s paintings have usually stolen the scene; it’s hard for any eye not to gravitate toward the signature neon palette and bold graphic lines of Erik Parker’s signature style. But in more recent years, with solo shows at Colette in Paris, a major exhibit at the Modern Art Museum of Fort Worth and at Paul Kasmin Gallery in NYC, Parker’s work has been gaining attention as much for the concepts evolving in his body of work as for its eye-catching psychedelic aesthetic.

Having started out as a student of surrealist pop artist Peter Saul at the University of Texas in Austin, before migrating up to SUNY Purchase College in the mid- 1990s, Parker describes himself as an “archivist of postwar New York art”; acrylic and ink works might simultaneously evoke the color of early influences such as Roy Lichtenstein as well as classical still-life themes, while including the figuration of more contemporary graffiti art. The influences of period art might be as identifiable in inspiration as they are unconfined to any type of period progression. Past work has included organizational charts and maps of artists, pop culture figures, and art movements around the world; more recent work takes on the political, with colorful, whimsical, and often grotesque compositions of antiauthoritarian movements.

For those who want to see Parker’s work up-close, this might be one of the biggest years yet; Rizzoli is releasing an edition of the artist’s work, “Colorful Resistance” (edited by Monica Ramirez-Montagut) in late July, while Paul Kasmin Gallery in New York will be featuring a solo show beginning Sept. 12 (paulkasmingallery.com). Either way, for an artist as continually immersed in the life of pop culture and art, Parker won’t be disappearing anytime soon. 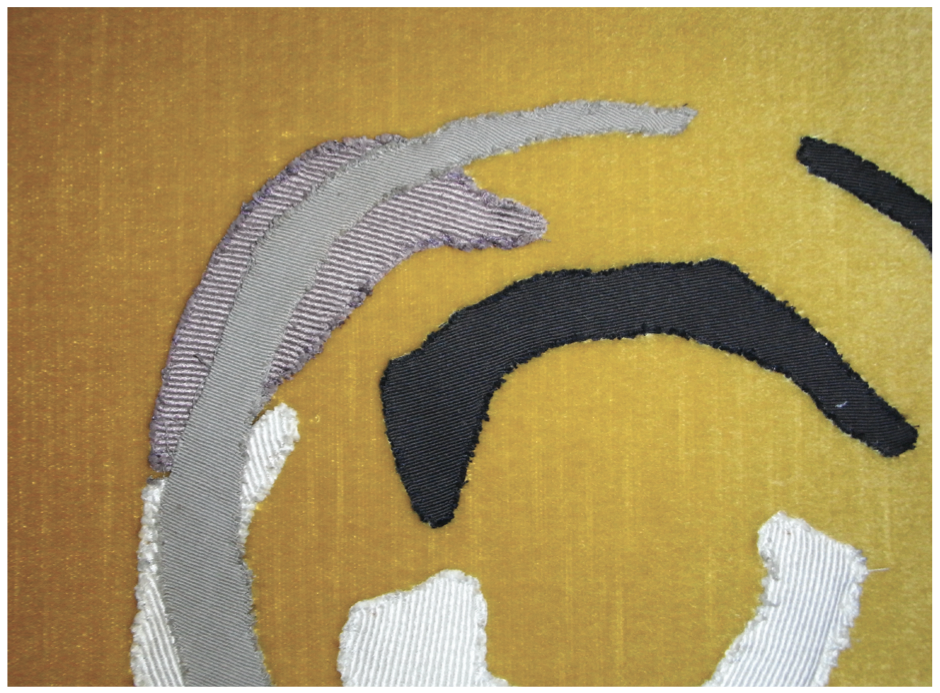 Since his solo debut in 2003 shortly after graduating from Cooper Union, the Munich-raised, NYC-based 32-year-old Nick Mauss has captured critical attention for his works across visual art mediums. He is known for reworking objects within alternate mediums, taking things remembered or frequently encountered and putting them into a disconcerting space separated from context. 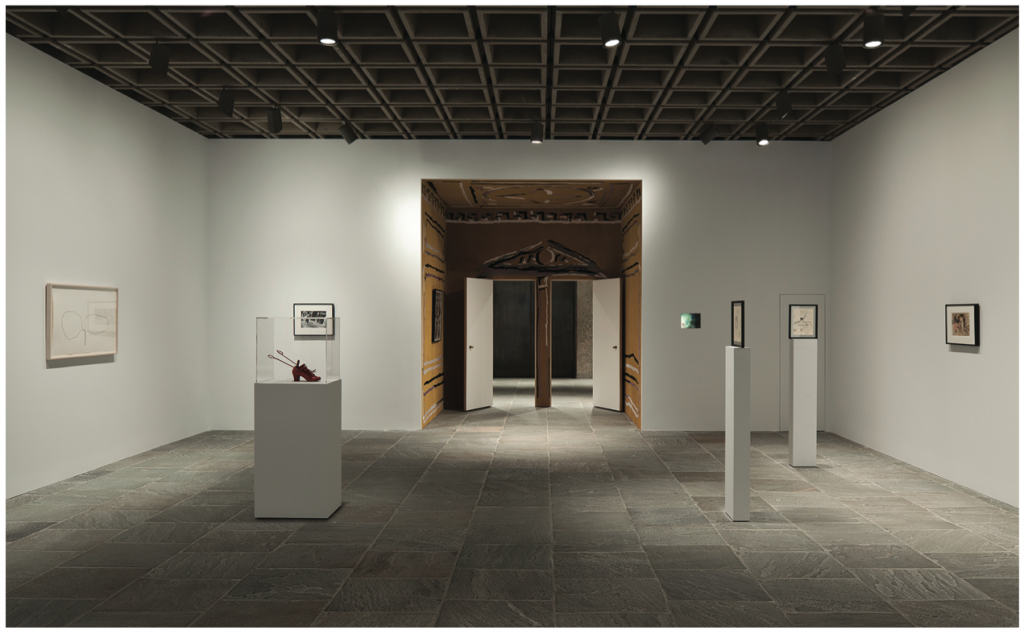 In an exhibit entitled “The Desire for the Possibility of New Images,” on display earlier this year at 303 Gallery in NYC, Mauss culled prior drawings and photos from his personal archive and silkscreened them onto white-painted aluminum. The result was a particularly haunting effect, one that evokes the experience of witnessing thoughts and ideas articulated from an earlier point in memory, but attempts to communicate with that material across a divide in time. His drawings and paintings focus on quotidian activities with the uncanny sense of something being slightly off: Mannequins examine computer screens reflecting outdoor landscapes, and photographs capture shadows of other photographs.

Even more recently, in his first invitational to the Whitney Biennial, Mauss’ newer installation juxtaposes curated objects and art works from prior decades alongside his own, for an equally disconcerting—if less inwardly focused—decorative effect. The entrance to the installation itself, an antechamber painted in gold and lined with purple velvet, is a reconstruction of a Christian Bérard-designed room designed for French cosmetics company Guerlain in the late 1930s.

“Mauss is comfortable going beyond the fine arts, and he has a feel for curating objects as idiosyncrasies, in a way that changes the way we perceive each stand-alone work,” Sussman explains.

Within the installation, Mauss’ own curated work included reverse-projected slides of his studio and other spaces, watercolors and other abstractions, juxtaposed with works from other artists taken mostly from the Whitney’s collection: a ’76 Andy Warhol piece, a Gary Winogrand snapshot, sketches by Eyre de Lanux, and, most predominantly at the entrance to the exhibit, a painting by Marsden Hartley.

The Mauss images, however, stand out most— not only because they are the newest objects in the exhibition, but because their presence creates an overall sense of self-reflection that captures the process of being both an artist and an art viewer. “Changing the context of fine art works draws the viewer into the process of reexamining the context of art in general, which is what Mauss does so well in his own images,” Sussman says.

Mauss’ works on paper, including cut-and-paste, carbon transfer and synthetic polymer works, are on view within the permanent collection of MoMA (moma.org); future exhibitions can be followed by visiting 303gallery.com.

Brooklyn-based Tom Thayer has stood apart from the pack over the past several years, both in his prolific output across mediums and for the distinctive, surrealistic mood that his painting, collage, sculpture and video work all share—either as stand-alone objects or combined in installations. Although Thayer pulls inspiration from a variety of sources, he dates the greatest influence on his vision back to his childhood in Chicago in the 1970s. “It was an unusual time in that the ideas of the ’60s were still persistent while its optimism was beginning to die away, and so you had educators and artists pushing an idea of creativity within this strangely melancholic atmosphere,” Thayer explains. “And in Chicago in particular was also this emphasis on outsider art and fringe art that also seemed symbolic of the era.” 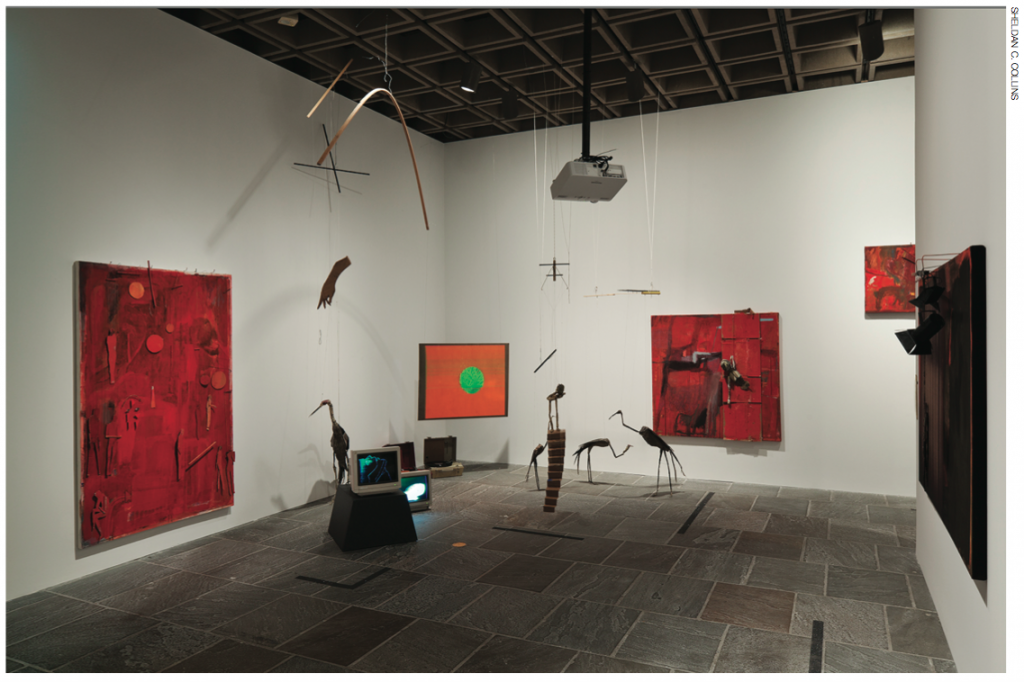 While apparent in works that explore dissonance and overall discord in the use of modern-day technology, that ’70s-era creative melancholy also appears in Thayer’s art in more abstract ways: psychedelic tones of paintings, off-kilter sculptures of puppets and birds, impressionist video abstractions and old recordings of German music composer Carl Orff’s music education series paired with Thayer’s own experimental music.

“Tom has a very unique singular vision,” says gallery owner Derek Eller, who exhibited a new solo show of Thayer’s work from April 27 through May 26. “And there’s something in the uncanniness of it that people are able to grasp and relate to from a different perspective. Tom is also a very inwardly- turned artist, which is something that I think has allowed his work to develop in a way that sets it apart within the art field.”

The interior focus is something that Thayer admits to, adding that he hopes to continue to create in a world where art often focuses on fitting within a model rather than climbing in the opposite direction. “When I was young, I had this view of artists as these outsiders, who were showing people things in work that went otherwise unacknowledged,” Thayer says. “These days, I go inside myself completely when I’m working; the ideas I want to get across are in the break between what is real and what is perceived about reality.”

Tauba Auerbach is hardly a new name on the New York art scene. Having launched her career at the renowned scene-setting gallery Deitch Projects, the Brooklyn-based artist and designer has captivated audiences over the past decade. Her works play with both the limits of visual perception and the intersection of science and art, including experiments of photos capturing television static and acrylics mixed with the random patterns of shattered glass. 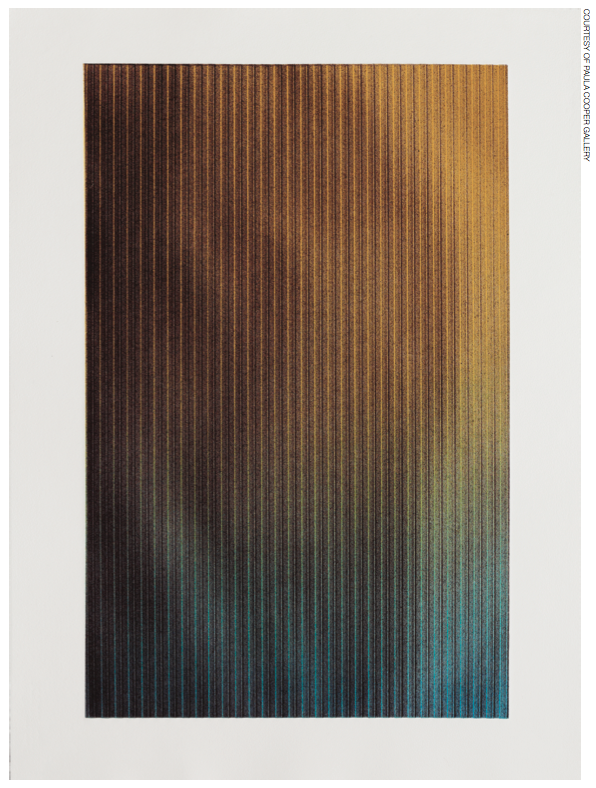 In her “Folds” series, started in 2009, Auerbach developed the process of adding glue to flat canvases and manipulating the surface by pressing and rolling the fabric into folds, then later spray painting them to create trompe l’oeil material and color effects.

Although early works in this technique were first presented at Deitch Projects in 2009, the series remained largely a work in process until recently. Now signed at Paula Cooper Gallery in NYC (paulacoopergallery.com), Auerbach opened with the show “Holiday Editions” in December 2011,and will be presenting a solo exhibit from May 5 through June 9. These coincide with major exhibits elsewhere, including “Tetrachromat” at Malmö Konsthall in Malmö, Sweden (March 16 – June 10), moving to Wiels Contemporary Art Center in Brussels, Belgium, in January 2013, and participation in a major group exhibition at the MoMA from May 6 through Aug. 12, 2012, “Ecstatic Laughter/Heaps of Language.”

The latter will likely work with Auerbach’s known interest and background in graphic design and typography, which has played a role in her ongoing creation of a series of pop-up books, including the new “[2, 3],” published by Sternberg Press in late 2011. Altogether, the new works testify that Auerbach’s desire to introduce new possibilities to both the design and shape of the visual arts world likely won’t end any time soon; and her process is one to follow.

What makes an artist stand out from the flood of exhibits is the ability to work with a medium in a way that offers new perspective to viewers and collectors. Whether re-imagining film photography, integrating older mediums with new ones or simply reworking materials in a way that hasn’t previously been done before, Deschenes, Thayer, Mauss and Auerbach constantly challenge guidelines and push for the unexplored—a talent that will follow through as each artists’ career continues.

As Sussman points out, “These artists are all at different points in their careers, but they’re all developing in a way that makes them exciting to watch; it’s the best possible time to watch them and follow the progression of their work.”