Artists Use the Ocean in Creative Works Around the World

Jul 20, 2015Bespoke Concierge MagazineComments Off on Artists Use the Ocean in Creative Works Around the World1

The faces of Jason deCaires Taylor’s human statues are relaxed, their eyes usually closed. The figures, often arranged in groups, explore themes of humanity and its relationship with its environment—which, right now, happens to be the ocean floor. One of the first artists to explore the concept of underwater art, Taylor has rightfully garnered attention for his striking sculptures. Made from pH-neutral cement contrived to last hundreds of years, his pieces are designed to attract living organisms and wildlife like colorful sponges and schools of fish; it’s a process that he has spent more than a decade perfecting.

One of his latest installations, Ocean Atlas recalls the mythical Greek Atlas, whose responsibility it was to shoulder the heavenly spheres. Cast after a young student in the Bahamas named Camilla, the statue weighs 60 tons and when viewed from below looks as if Camilla is bearing the entire weight of the ocean on her shoulders. Installed in October 2014, it is currently the world’s largest underwater statue.

In another famous work titled Vicissitudes, 26 children hold hands in a circle with their backs to the middle. Like all his work, Vicissitudes has constantly been evolving since its installation, and now brightly colored corals adorn many of the faces. The piece, located in Moliniere Bay in Grenada, is one of dozens on display at the first underwater sculpture park, a project that Taylor spearheaded in 2006. 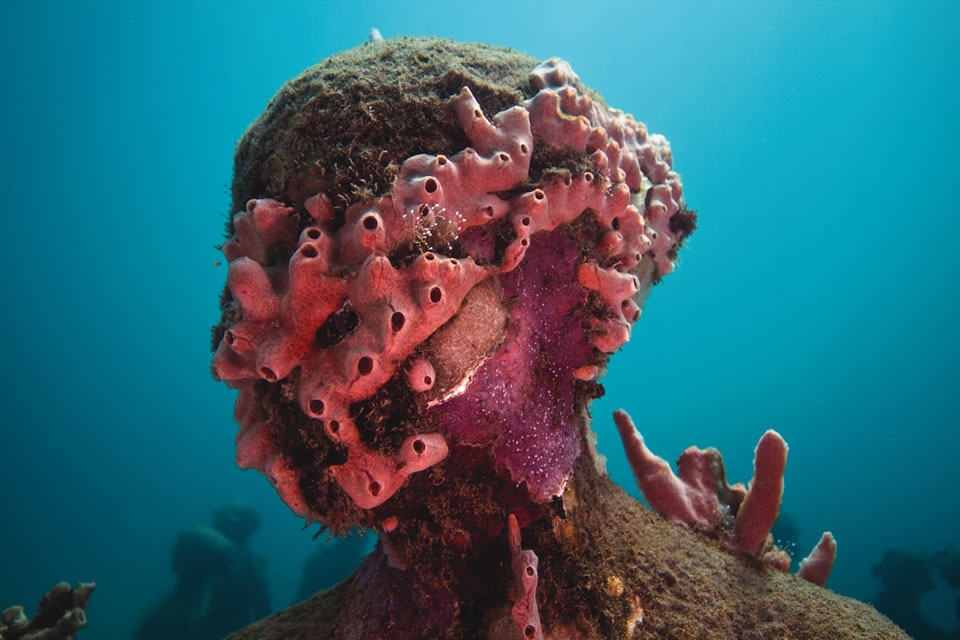 The success in Grenada led to the creation of Museo Subacuático de Arte (MUSA) in 2009, an underwater museum located in the National Marine Park of Cancun, Isla Mujeres and Punta Nizuc in Mexico. Featuring more than 500 sculptures by Taylor, the series is appropriately called The Silent Evolution and receives hundreds of thousands of visitors a year.

While some pieces like The Listener explore humanity’s relationship with the sounds of the sea, others like Banker, which features men in suits with their heads in the sand, offer another type of social commentary.

After exploring coral reefs as a boy in Malaysia (his parents held posts as teachers on the island for a few years), Taylor maintained an affinity for the water. Now his artistic and environmental sensibilities have fused, bringing awareness of nature to his audiences. The underwater exhibits are designed away from natural coral reefs so that they can regenerate; they also support wildlife in new areas since they serve as artificial reefs.

“It’s always been about showing what an incredible and fantastic resource the earth has and how amazing our seas and coral reefs are and how vital it is to protect them,” he says.

But Taylor’s new project may be the most impressive of them all. Located in the Canary Islands, the underwater museum is slated to be completed at the end of 2016 and will include more than 500 sculptures on a larger scale than any of his previous works. It will also be the first underwater project to incorporate architectural elements like gateways, walls and a botanical garden. “The Atlantic Ocean is quite exciting and different,” Taylor explains of this new environment for him to work in. “The water temperature, the species, the marine life is on a different scale.” 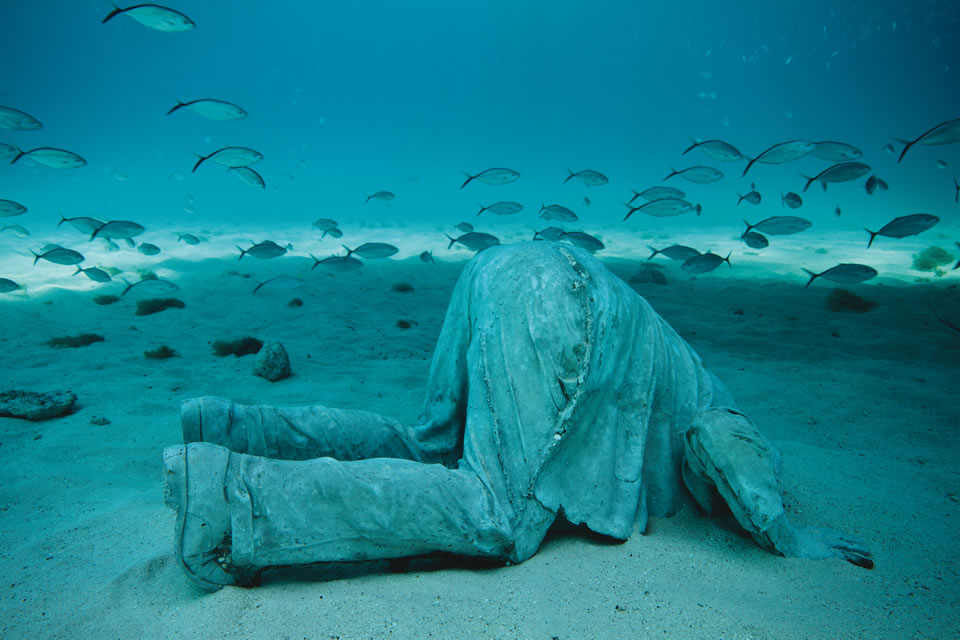 Though Taylor’s projects aren’t obvious to the naked eye, aquaphobes are in luck: his work can be seen on foot in some places. In Canterbury, U.K., for example, Alluvia is installed less than 5 feet (depending on rainfall) below the surface of the water in the River Stour near the Westgate Bridge. Passersby will see the sculptures as they traverse the path, but for added visibility, the two female figures are illuminated at night.

At The National Diving and Activity Centre in Chepstow, U.K., a statue called Inverted Solitude is suspended underneath a floating platform and can be viewed by peeking over the edge.

In Grenada and Cancun, Mexico, Taylor’s sculptures are still located underwater but are most easily viewed by glass-bottom boat. Because of changing visibility conditions, the sculptures often delight and surprise passengers as they capture glimpses of the figures in the water several feet below them.

The larger projects, however, take a bit more effort to see firsthand. Taylor, a former dive instructor, explains that in order to really appreciate most of his underwater art, you’ve got to get wet. “Scuba is the best because you are really free to see it from many angles. And some of the most fascinating organisms and changes have to be seen close-up in the details,” he says, adding that snorkeling is another possible option since you’re free of equipment and able to experience the art in the most natural way.

At the Bahamas Reef Environment Education Foundation (BREEF) sculpture garden in the Bahamas, the Ocean Atlas sculpture is installed 16 feet below the water and is also best explored with a snorkel. 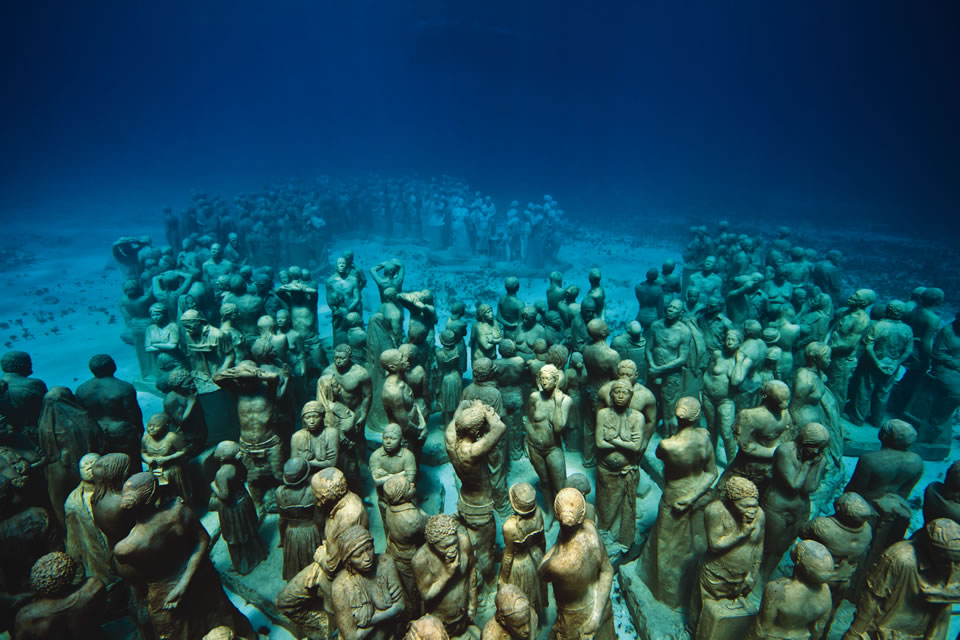 The Silent Evolution off the coast of Cancun, Mexico (Courtesy of Jason Decaires Taylor/Underwatersculpture.com)

Taylor is not the only artist exhibiting his creations under the sea. Last year, Italian photographer Salvo Galano exhibited a series of large portraits about 10 feet below the water off the island Ponzo in Italy. Abstract expressionist BJ Price also attracted attention for exhibiting several prints underwater at the Sea Life Sydney Aquarium.

But one of the more prominent names as of late is Austrian photographer Andreas Franke, who has exhibited stunning photographs on sunken ships since 2011. Viewable by scuba, Franke’s work features images of people he took in the studio superimposed onto photographs of the shipwreck. The photographs are then displayed on the ships, creating a surreal feeling that is compounded by the experience of viewing them underwater. For example, one image appears as if a woman is hanging laundry on the ship and another shows a couple kissing as fish swim around them.

A diver that has been exploring the oceans for more than 20 years, Franke says that the visual effect of viewing photographs underwater is incredibly unique. “There is a special light that you find underwater—almost like a fog—that you can’t find anywhere on land,” he says. “When you look at the photographs, it is crisp and sharp in the foreground, but even just 50 feet away, it disappears into nothing.” 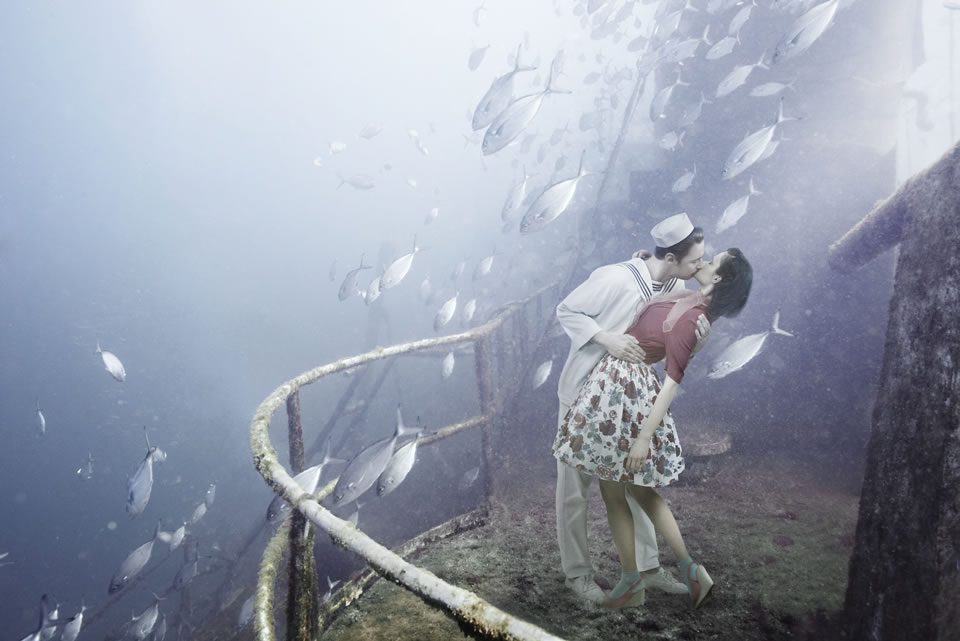 By exhibiting the photographs on the shipwreck, the artist brings the work full circle. “What I love about shipwrecks is that it is a man-made piece. It is not part of the sea; it has a beginning and a history. It is a wonderful, mystical scenery,” he explains. “It’s very special for a diver to dive a wreck. They think about what happened there, and when they see images, they can see that someone else thought about it too.”

Like Taylor’s sculptures, Franke’s photographs, sealed behind Plexiglas, undergo a unique process after they are installed. “Over the course of an exhibition, the sea life becomes a part of the images. The images look like plasma screens when they go down, perfect and high-end,” he says. “Then plankton and sea life grows on the image in a new process. It creates a unique piece, like aging. I love the process.”

In recent years, Franke’s projects have been exhibited underwater on the USS Mohawk CGC, a 165-foot World War II warship that was sunk in 2012 off the coast of Captiva Island in southwest Florida as a memorial reef; the SS Stavronikita, a Greek freighter that caught fire in the 1970s and was sunk off the island of Barbados; and the USS Vandenberg, an former missile tracking ship that was sunk off the coast of the Florida Keys in 2009.

Though Taylor and Franke are two of the first to display art underwater, they likely won’t be the last. Taylor finds it exciting that other mediums have yet to be exhibited underwater. “The oceans are an incredible space for artists to exhibit their work in many different forms—video, dance, music—in all different visual arts,” he explains. “There are so many opportunities to explore the space and it hasn’t been done enough.”