Athletes can attest that when it comes to professional sports, it’s an inspiring feeling to play for their hometown, serving as a glorified representation of their corner of the world. From Major League Baseball to the NBA, there are several occurrences of star players having the place where they grew up emblazoned across their jersey. But for America’s most elite cyclists, before 2011 there weren’t many opportunities for them to relish in racing down familiar streets. Many of the sport’s top events, the Tour de France for instance, take place abroad. Things changed four years ago when the USA Pro Cycling Challenge (now referred to as the USA Pro Challenge) emerged on the scene. It has since grown into one of the largest U.S. cycling events; it is televised in more than 175 countries worldwide and brings in thousands of spectators to Colorado each August.

“It is incredible riding through Aspen during the Pro Challenge,” says Colorado native and two-time race winner Tejay van Garderen of the BMC Racing Team, who used to live in Boulder but now calls Aspen home. “I always dream about being able to ride in my hometown the way these European guys do. When the Italians ride the Giro [d’Italia], it gives me that same kind of feeling to be around friends and family. It’s really special.”

This year’s race begins Aug. 17 in Steamboat Springs and concludes Aug. 23 in Denver. In between those points, cyclists traverse seven stages that take them through several host cities including Aspen, site of the third and fourth stages Aug. 19 and 20.

“The Aspen section of the course is different each time,” explains van Garderen, who has raced in the Pro Challenge every year since its inception and is committed to racing again in 2015. “The circuit we’ve run the past two years, it’s difficult, it’s challenging, it’s punchy, but it is a short course. It hasn’t had a big summit finish or time trial, but it’s still made an impression. I remember the first year we came into Aspen, coming over Independence Pass—that day had a big impact on [the] race and shook up general classification. I remember it being a very hard day.”

More than 120 riders from 16 teams compete each year and, when it comes to winning, Tom Danielson and the Cannondale-Garmin squad are expected to bring top contenders. Beyond competition, the race means a lot to the city of Aspen, says Mayor Steve Skadron, who is also an avid cyclist and frequently rides the trails around town. “The race puts Aspen’s passion for cycling on an international stage,” he explains. “It has a worldwide television audience who can see Aspen’s natural beauty and outstanding cycling terrain.”

If you are in town during the race, there are a number of areas to view the excitement. Skadron suggests the outdoor video screens set up downtown, and the city also hosts a festival with music and food. For an immersive experience, van Garderen recommends the VIP tent, but he also admits there are other casual options. “Sit in a nice cafe and drink some wine and watch [it] on TV and then just pop out onto the street for the finish,” he explains.

A number of restaurants also provide a great vantage point. The Aspen stage of the race typically finishes on Main Street, which is lined with eateries. Skadron suggests Matsuhisa or Asie for Asian fusion cuisine—both with outdoor seating—or the Italian restaurant Acquolina Trattoria & Pizzeria.

If watching the Pro Challenge has you charged up to hit the pedals yourself, there are both mountain and road bike trails for riders of all experience levels in the area. Riders should be prepared for the difficulties of riding at elevation, as Aspen sits at 7,900 feet above sea level. “Always wear a helmet and take an extra water bottle,” Skadron advises. It’s also best to dress in layers as the weather can change quickly, and a patch kit and pump are also useful in case of a flat tire. 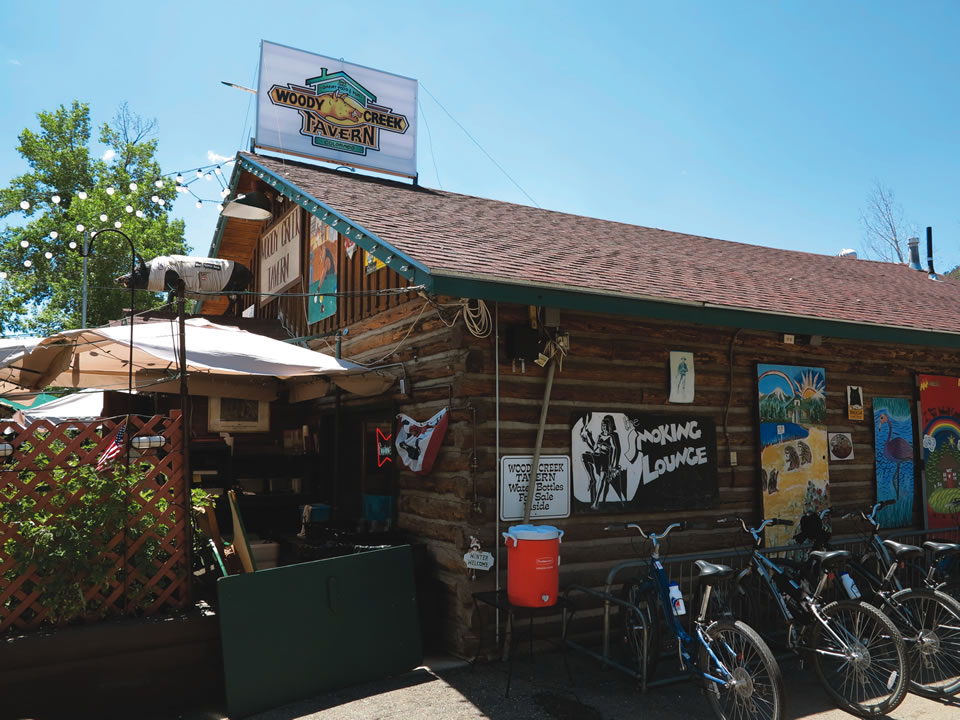 For those just starting out, the best ride in Aspen—which can be done on either a road or mountain bike—is a portion of the Rio Grande Trail along the Roaring Fork River between Herron Park in Aspen and Woody Creek Tavern. Built on the former tracks of the Denver and Rio Grande Western Railroad, this rail-to-trail runs for 42 miles between Aspen and Glenwood Springs, but beginners just wanting to get out for a cruise can ride the mostly paved route for nearly 8.5 miles to Woody Creek. Made famous by journalist Hunter S. Thompson, the tavern is a local favorite for a burger and a beer. A local’s tip: Bring cash, as credit cards are not accepted.

“This is the classic beginner ride,” Skadron says. “On the way to Woody Creek, it is all downhill and many people then take a taxi home.” For those who would prefer to bike home, it’s all uphill, with some steep stretches exceeding a 3 percent grade.

Skadron recommends beginner mountain bikers visit Sky Mountain Park, which is 2,500 acres of open space dividing the Brush Creek and Owl Creek valleys near Snowmass. “It’s great for all levels from beginner to pro,” Skadron says. “Trails here use a ‘flow’ design without super technical terrain, but they provide a great workout.” Plus, the scenery provides sweeping views of the Elk Mountains, Aspen, Independence Pass, Mount Sopris and Basalt Mountain. 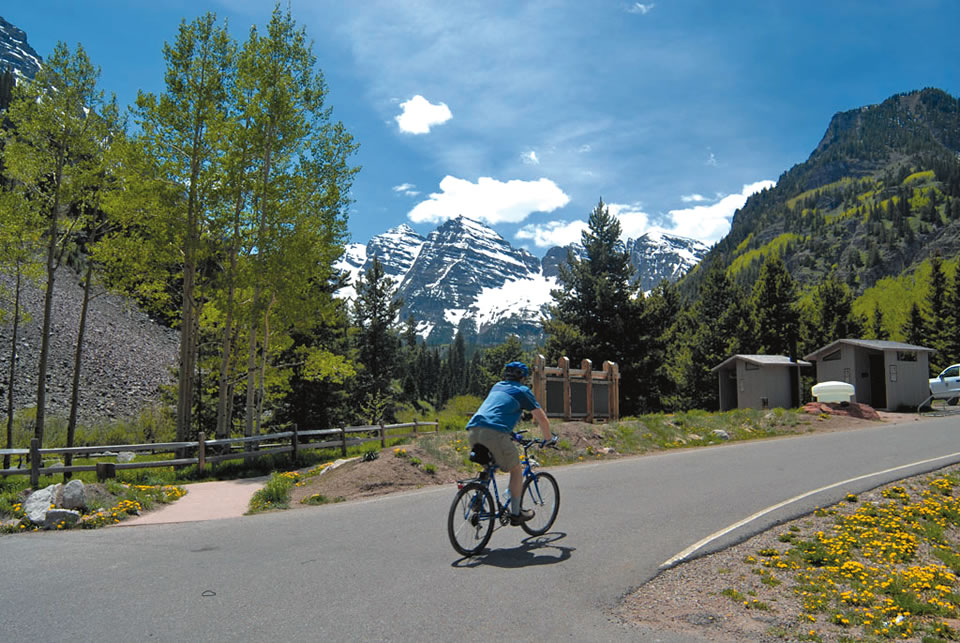 Aspen cyclists tend to agree that when it comes to an intermediate road trail, the 9-mile ride up Maroon Creek Road from downtown to the edge of the Maroon Bells-Snowmass Wilderness offers the best scenery. It’s a gradual climb the whole way up to Maroon Lake, which is a freezing, deep blue pool at the base of the purple-hued peaks. What’s best about this ride for intermediate cyclists is—despite the incline—the road is closed to motorized vehicles except for buses during summer, which means two wheelers rule the road. “The Maroon Bells are … a go-to ride for a lot of people visiting and for good reason,” says Colorado native and two-time Pro Challenge race winner Tejay van Garderen, who used to live in Boulder but now calls Aspen home. “The views out there by the lake are some of the most beautiful you will ever see.”

The most difficult portion comes at the end of the ride out to the lake, when the incline increases dramatically. Lush aspen groves provide shade, however, and the ride home is downhill so you won’t be out on the road for long. Use caution, as it’s easy to quickly pick up too much speed.

For mountain bikers with intermediate skills, Skadron recommends riding to Buttermilk Mountain from Aspen and checking out what he calls the Ho Chi Minh Trail, officially known as the Buttermilk Training Loop. To get there, Skadron says it’s a 15-minute ride from downtown across the Tiehack Bridge over Maroon Creek. Then, head to the Tiehack chairlift on the easternmost part of the mountain and look for the Buttermilk Training Loop. Follow the road up to the mountain’s summit, before looping back to the lift. “It’s [approximately] a 90-minute loop and you descend on rolling single track back to the lift,” Skadron says, adding that the time depends on ability.

Independence Pass boast some of the highest paved roads in North America.

When it comes to more difficult trails, Aspen delivers. “On my mountain bike, I love to ride up Smuggler Mountain and back into the Hunter Creek Valley … over to Van Horn Park, around the Hunter Creek Rim and down the Plunge,” Skadron says. “It includes lots of big climbs and rolling single track through lush aspen forests. It’s epic. In July, the wildflowers and views of the Elk Mountains are brilliant.”

To do this 17-mile backcountry loop, start at the base of Smuggler Mountain Road and follow it up to the Smuggler Observation Deck, where there are stunning views of Aspen. From here, follow signs to Hunter Creek Cutoff Trail and ride down to the valley floor before reaching Hunter Valley North Trail. Once you reach a parking area, climb up Red Mountain Road, a dirt track, into Van Horn Park and then on to Four Corners. The riding here is steep with limited shade, so make sure to bring enough water. From here, hook up with the Secret Trail and ride it to the Upper Plunge, which turns into the Sunnyside Trail that takes you back into town. This is the most technical part of the ride and includes some extremely steep, rocky and rooted terrain that is suitable for experts.

“It’s a gnarly descent down a dirt road with a lot of jagged switchbacks,” Skadron says. Those who aren’t familiar with the loop can download the MTB Project app, which has a built-in trail map to follow.

Serious road bikers will want to pedal from Aspen to the top of Independence Pass, just like the racers often do in the Pro Challenge. It’s a grueling 18-mile uphill challenge (a 4,400-foot elevation gain) from Aspen, but Skadron and van Garderen both recommend it. The views from the top of Independence Pass, which sits at 12,095 feet on the Continental Divide, are stunning, and reaching this point comes with bragging rights that you rode one of the highest paved roads in North America.

The route follows the side of the highway and, notably, it is sometimes less than two lanes wide for cars and there are a number of sharp blind corners, so cyclists need to be especially mindful of traffic. 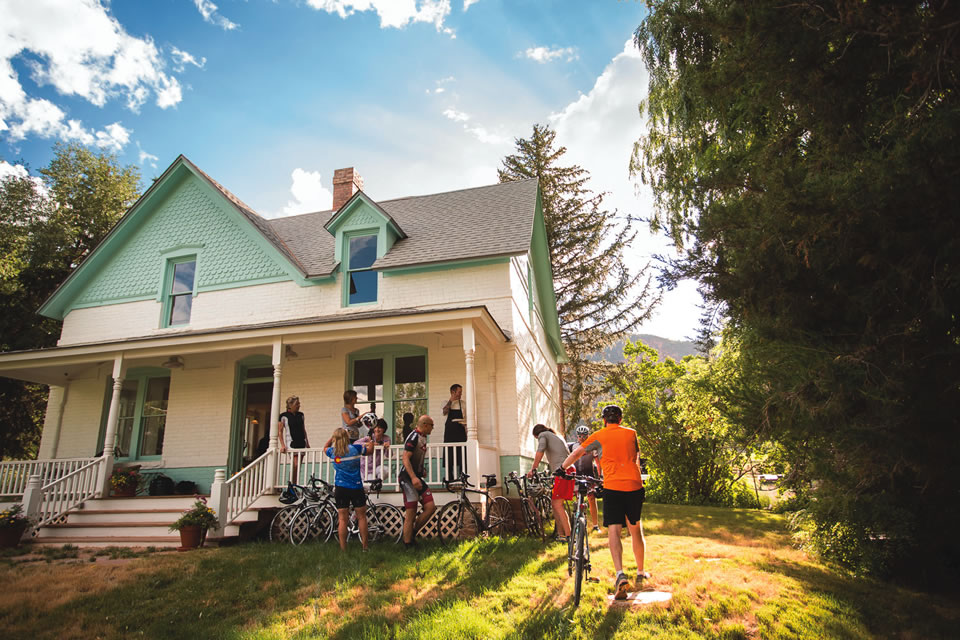 If you’d rather not hit the trails alone, there are a number of curated bike experiences around Aspen. If you’re staying at either The St. Regis Aspen Resort or The Little Nell, both properties offer bike concierge services with a variety of unique rides. The St. Regis, for instance, partners with Aspen Outfitting Co. to offer trips that go everywhere from Colorado wine country on the western slope to rides that include parts of the USA Pro Challenge course from previous years; the latter is for more advanced cyclists due to extreme elevation changes.

During the race, The Little Nell is running Clip-In With Christian, which is a four-day, three-night experience led by professional cyclists Christian Vande Velde (who won the Pro Challenge in 2012) George Hincapie and Craig Lewis. It takes riders to Aspen’s most famed routes and provides VIP access to the Stage 3 Aspen portion of the Pro Challenge; participants ride during the day and stay at The Little Nell each night. If you simply want to rent a two-wheeler, check out Ajax Bike and Sport, which can also provide advice on selecting trails.