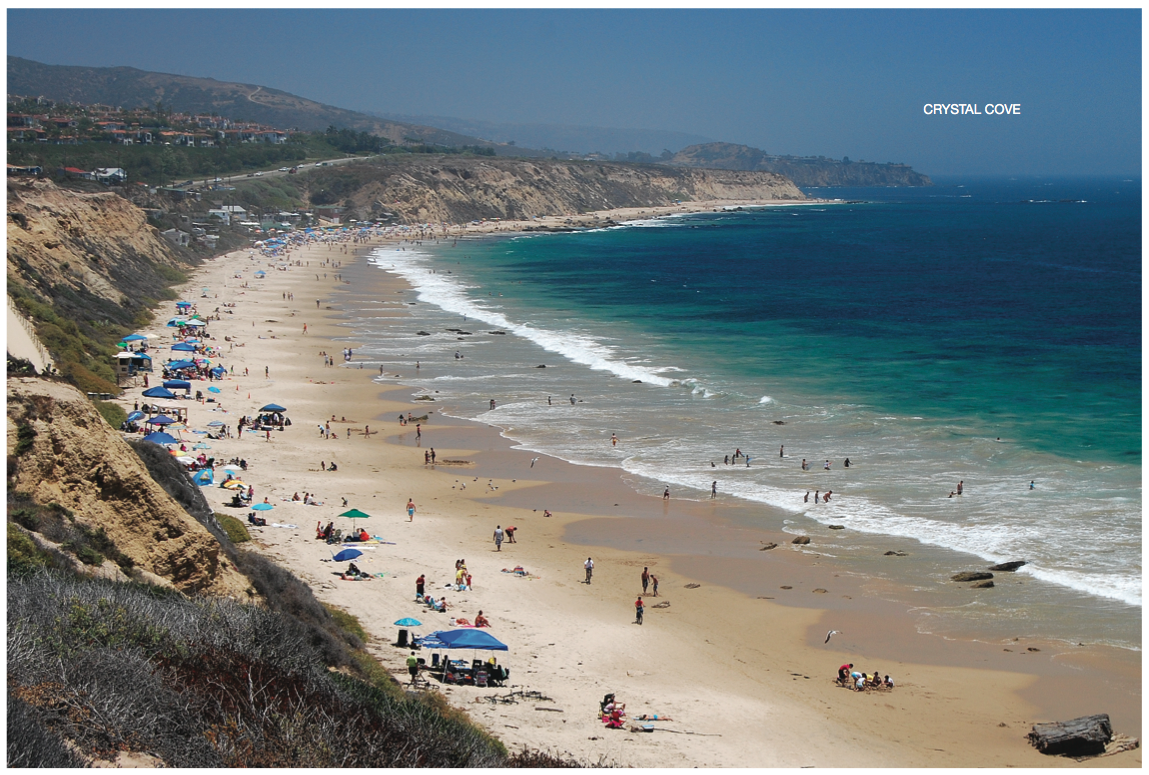 Coastal Orange County’s stunning beaches offer something for everyone. 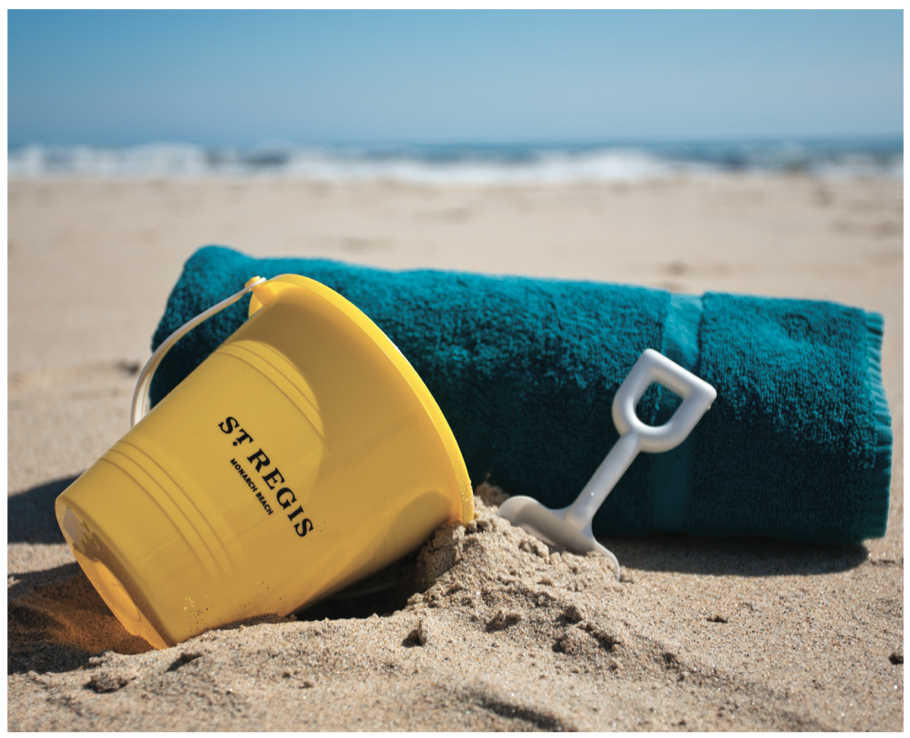 A lofty coastal view can whisper to the soul and serve as a magical backdrop for the most special moments in our lives. But views are just the beginning. Nothing compares to having the tide in surround sound as the cool sea tickles your toes. The taste of saltwater after plunging in awakens the body. For a day at the beach, there’s no place better than Orange County, which is home to some of the most beautiful coastline in America.

Orange County’s beaches have garnered praise since the first explorers ventured here. In 1835, sailor-author Richard Henry Dana Jr., whom Dana Point is named after, declared this the only romantic spot in California. Upon making landfall, he penned this inspired thought: “I experienced a glow of pleasure at finding that what of poetry and romance I ever had in me.” Many years later, organizations of equally passionate people, including the California Coastal Commission and Surfrider Foundation, have made it possible to enjoy the beaches as we know them today, leaving us pristine swatches of coast where we can teach our kids how to surf, make marriage proposals, dance to music and take amazing family photos. It all happens here on Orange County’s stunning beaches.

A privileged destination out of sight and inaccessible to all but a select few, the beach at the Monarch Bay Club is a small and secluded stretch of sand—about a half mile—where the waves are typically mellow and the amenities are first class. Open only to paying members, guests of The St. Regis Monarch Beach and the 238 homeowners on the bluff directly above, the gated entrance to this inviting cove is discreetly tucked beneath leafy palm trees and birds of paradise from a corner of the Monarch Beach Golf Links. The buzz of Pacific Coast Highway feels hundreds miles away (but it’s actually only half a mile). For its guests, Monarch Bay Club is elegant simplicity at the beach. 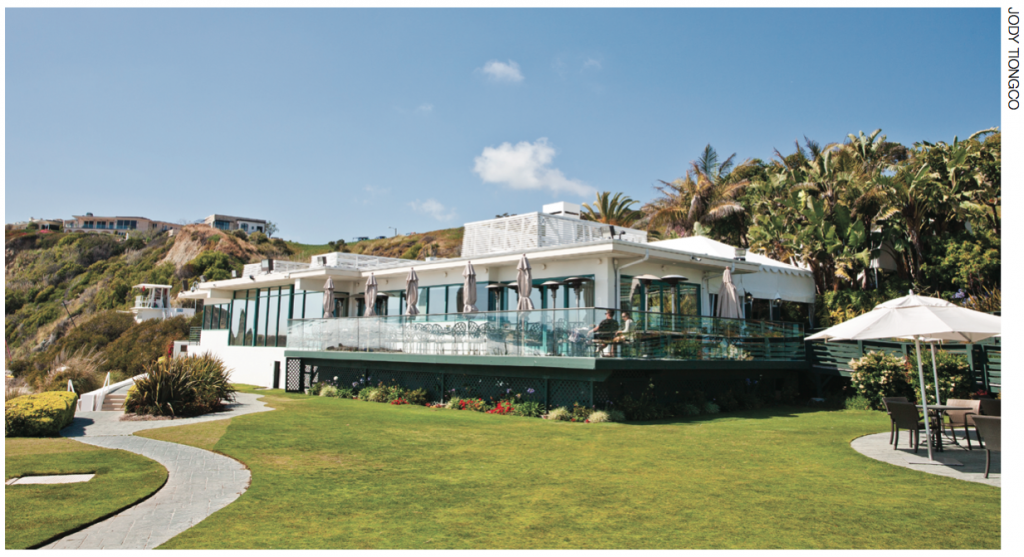 “There are hardly any places this close to the water in Orange County,” says Christy Bonner, marketing manager at The St. Regis Monarch Beach. “This is a place where you can come in your flip-flops and shorts and get a mojito and calamari, and enjoy the sunset. It’s not stuffy. It’s a nice family environment with its own sense of exclusivity.” 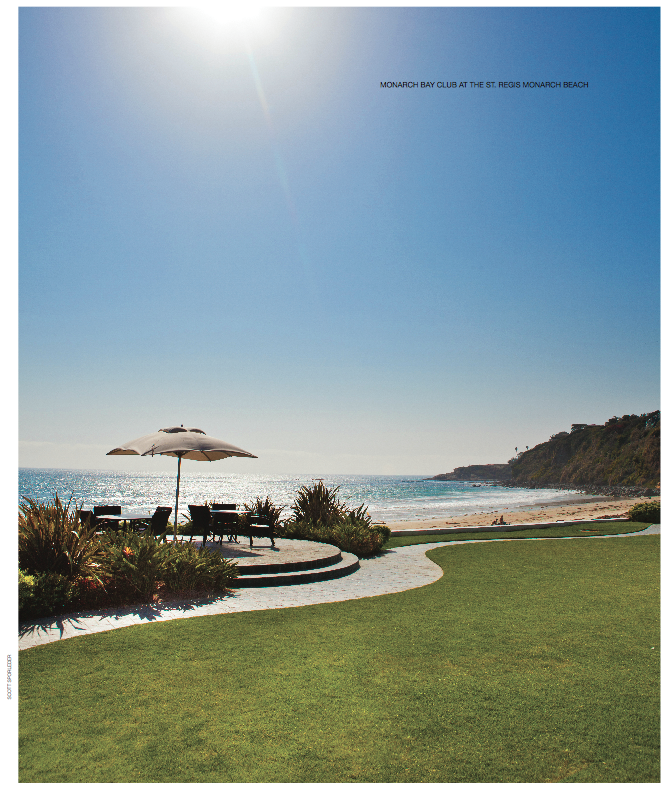 For St. Regis guests, a beach day can begin with ordering a picnic lunch from in-room dining, which could include farmhouse cheeses, smoked chicken sandwiches with tarragon mayonnaise and butter lettuce on sourdough, or smoked salmon finger sandwiches. With a small beach bag in arm, guests can hop on a tram—which looks like a limo golf cart—through the fairways and greens to this exclusive sandy beach enclave. Beach chairs, lemon water and fresh towels are presented upon arrival. Visitors spend time bouncing back and forth from the scenic sand, the grassy lawn, nine-table deck and, when they need some shade, the cool and sophisticated palm court lounge. A California lifeguard-trained surf butler is on hand for surf lessons, kayak tours or to simply shoot the breeze. This is also the ideal place to launch a beach walk, as two of Orange County’s most beautiful landscapes lie due south: Salt Creek and Strand beaches.

In addition to Pacific Rim-inspired lunch and dinner menus, the full bar at Monarch Bay Club serves handcrafted cocktails. Margaritas and mai tais are made with fresh squeezed juices. The Wilson is a specialty Bloody Mary named after the “Cast Away” character. One of the bar’s most popular drinks, perfectly in sync with the day’s order of lounging under a beach umbrella, is sparkling wine on ice with a splash of orange juice.

Since St. Regis is the only resort in Dana Point with a beach club right on the sand, evenings here are one of the most captivating hours of the day. Guests can watch for dolphins and relax into the night. Any given Friday night features a jazz band, disc jockey or a family movie on the big screen. “It stays twilight until about 8:15 in summertime,” Bonner says. “It’s very unique to be dining this close, right over the sand.” 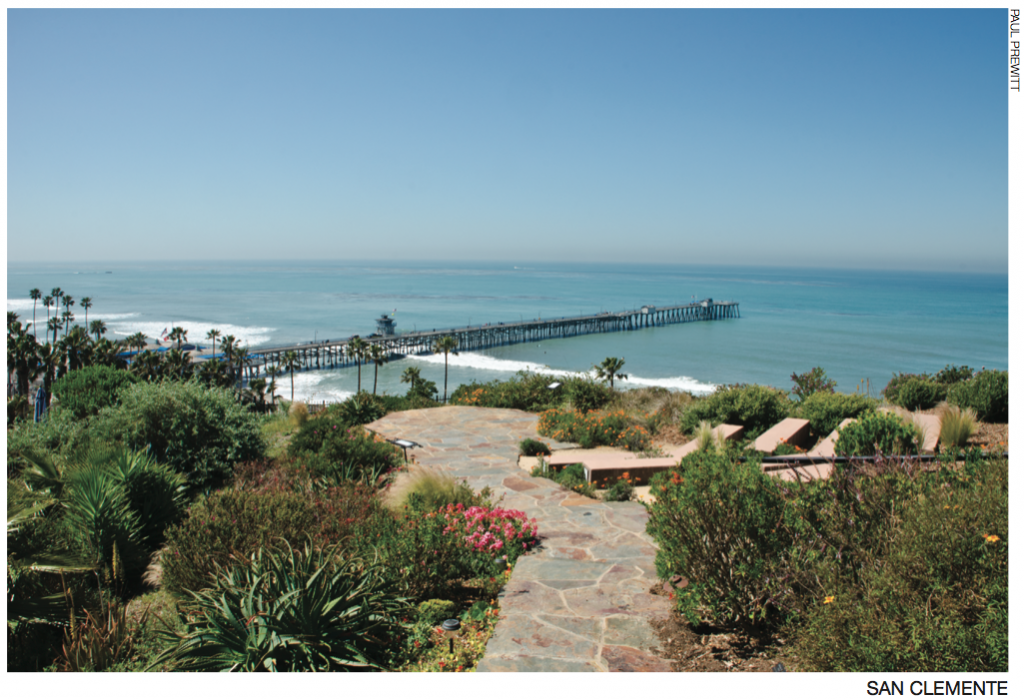 The good vibrations of quintessential California surf culture are found on the busy beachfront of this coastal town, where the legacy of surfing and the vibrancy of west coast living have been perfectly preserved. Stroll the pier for a bird’s-eye view of surfers, then grab a seat at Fisherman’s Oyster Bar overlooking the water. 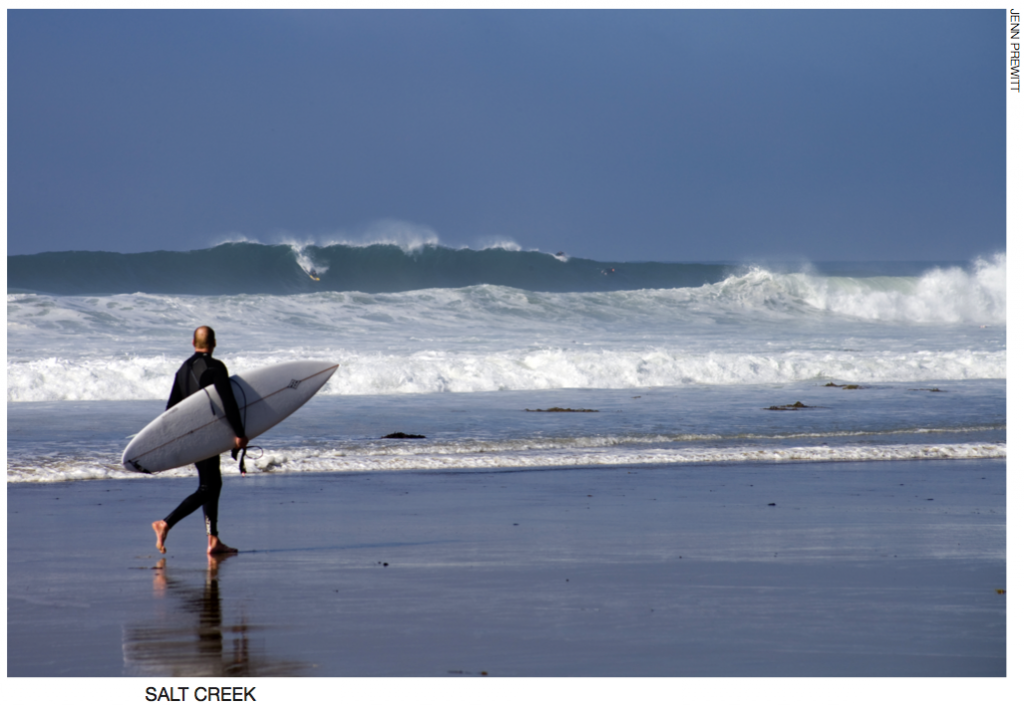 One of the closest beaches to St. Regis Monarch Beach—a 0.4-mile walk through Sea Terrace Park—also happens to be one of Southern California’s most beautiful. Salt Creek in Dana Point is a very popular surfing beach where well-traveled surf vans and family sedans dot the parking lot. Waves are intermediate level most of the year. The large grassy hillside above the sand is ideal for picnics and leisurely strolls. The scenery is breathtaking.

Crystal Cove, located between Laguna Beach and Newport Beach, has been a vacation spot since the 1920s but did not become a state park until 1979. With the combination of historic cottages to peek into, an upscale oceanfront restaurant, bluff- top footpaths and 3.2 miles of pristine beachfront, Crystal Cove is “Orange County wonderful”— without losing any of the natural scenery.

If any one beach were chosen to epitomize the amount of passion Southern California residents have for their coastal lands, it’s the six acres at the Dana Point “point” known grandly as The Strand.

Holding the distinction of being Richard Henry Dana’s landing place, the beach experienced a 1960s heyday as the laid-back getaway for Los Angeles’ elite and the summer escape for the Chandlers, the founding family of the Los Angeles Times. The Chandlers sold the property to Headlands Reserve LLC in 1998, and a decade of planning and development began. In February 2010, Strand Beach, bordered by Strand Vista Park and a 2,200-foot sidewalk along the shore, officially opened to the public. To many, the beach is still new.

“It’s one of the most famous surfing beaches on the Southern California coast, and it has a great history,” says Carol Finizza, communications director at Headlands Reserve. “The Chandler family could have afforded to go anywhere, and they chose this little cove as their getaway from Los Angeles.” The Chandlers and their friends lived in mobile homes perched on the bluffs. When they planned a three-hotel development, they were met with opposition from the city and community residents. “Sanford Edward [the president of Headlands Reserve] believed we needed to empower the community with something better than a compromise: forward thinking. The result is a lot of open space that retains the natural beauty of The Strand,” Finizza says.

Today, beach visitors use a long staircase or ride a funicular tram down the tall cliff to the sand where signature Orange County waves roll in from the wide Pacific Ocean and clean sand stretches from sea to bluff. On the way, they pass through 188 graded home sites in the footprint of the former mobile home area. With about 50 percent of lots already sold (starting at $1,950,000), the sites provide excellent ocean views and access to a $10 million, 9,000 square-foot residents-only beach club, designed by local architect Mark Singer. Individual home sites average 11,000 square feet and come with a Coastal Commission permit. They can be designed however the homeowner wishes, but an architectural review board has the final say. “Sanford’s vision was the highest quality, but not cookie cutter. He really wanted an eclectic mix of architectural styles. It’s great to have the home you’ve always dreamed of,” Finizza says. Homeowners have golf cart tunnel access to the oceanfront beach club where they can swim laps, hold business meetings or attend wine tastings, all 20 feet over the waves. 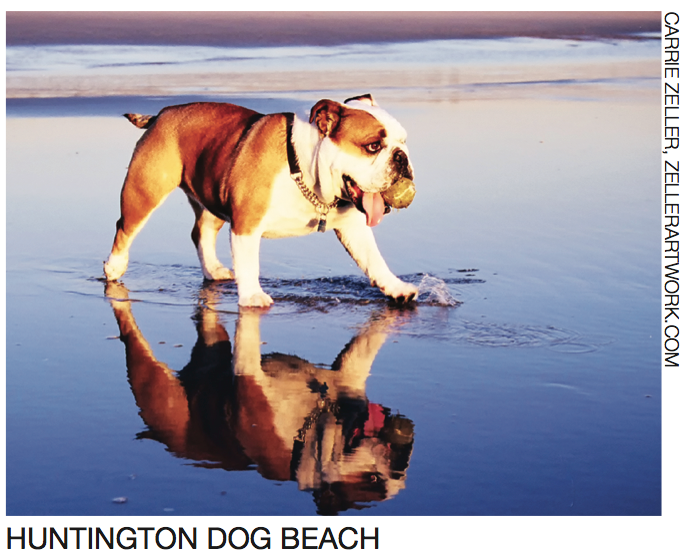 Californians love their dogs, so it’s no wonder that prime real estate in happening Huntington Beach is home to the region’s best dog beach. Wide open stretches of sand and tumbling waves create the perfect setting for dogs to run and play. Dogs are allowed off-leash but must be watched and controlled at all times. Aggressive dogs may not be best for the beach, and all owners must pick up after their pooches while enjoying the beach.

With meandering footpaths that follow the natural pattern of the cliff and picnic tables nestled under palm trees that overlook lapping waves and rock-studded coves, Heisler Park in Laguna Beach would be spectacular even without the sandy beaches below. Pass by plein- air painters, dog walkers and scuba divers gearing up to descend staircases to the water’s edge. Tide pools containing little pockets of sea life are what the beaches and coves along Heisler are known for, but don’t forget to look up for Seal Rock and Bird Rock. “It’s spectacular there because you can explore all the coves, and then you have this little park where you can sit and watch the sunset,” says Gundula Reile, chef concierge at The St. Regis Monarch Beach, who recommends the OC Wildlife & Beach Tour (949-500-6981, ocwildlifebeachtour.com). “Cherie has such a great knowledge about all the animals, and what to do so that you don’t destroy them. She gathers you around the tide pools and explains everything in such a colorful way.” 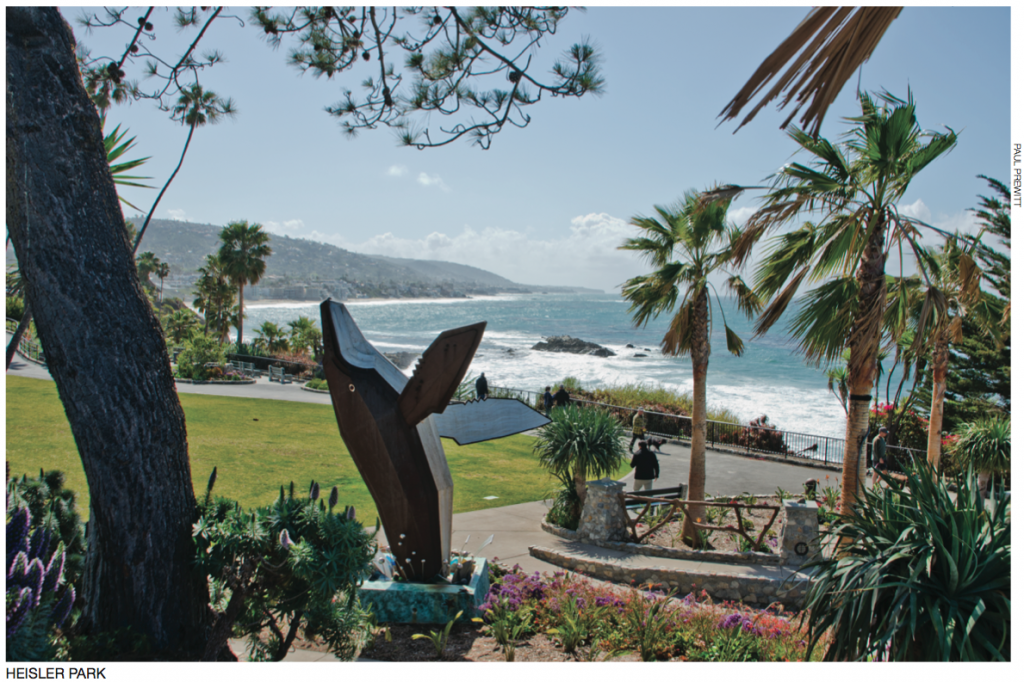 Perhaps the greatest thing about California’s coastline is its spectacular variety—from dramatic cliffs, to endless sand. For every beach mentioned here, there are at least five more nearby that are equally excellent and open to exploring. Whether your accessory of choice is an umbrella drink or a surfboard, Orange County’s backyard is calling your name. 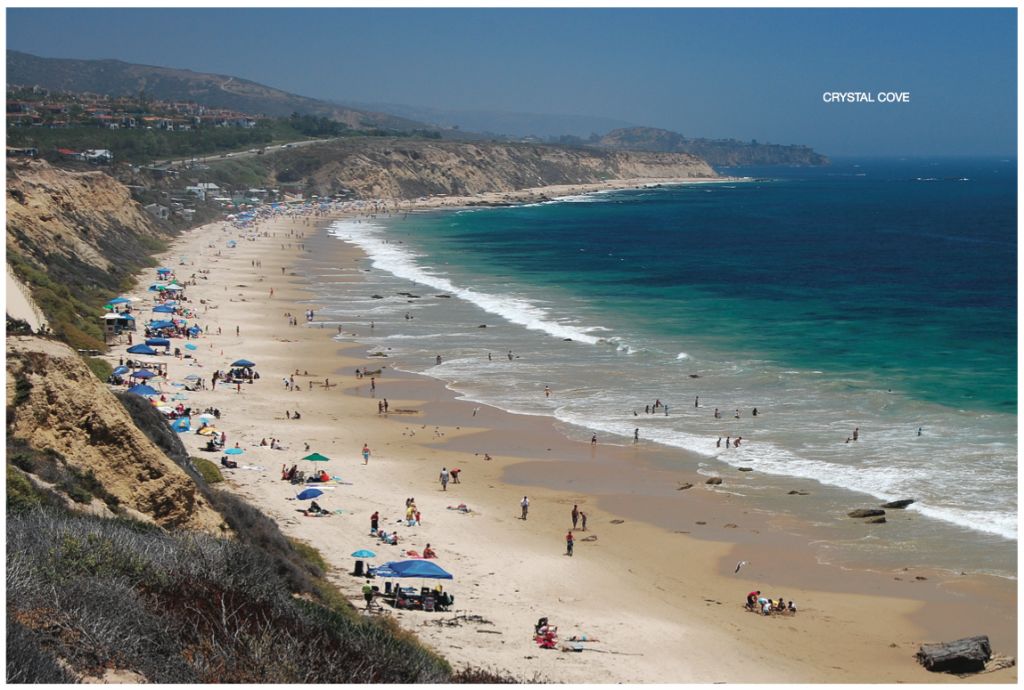 A walk from the resort is 0.8 miles round trip; parking is $1/hour; dogs on leashes are allowed on paved areas. (ocparks.com)

To drive from the resort, take the I-5 south; exit Ave- nida Palizada, turn right, turn left onto El Camino Real, turn right onto Avendia Del Mar. Parking is $1.50/hour; dogs on leashes and bicyclists can use the San Clemente Coastal Trail. (scchamber.com)

The Strand at Headlands

From Monarch Bay Club, walk south along the beach (about two miles). To drive from The St. Regis Monarch Beach, turn right on Niguel; left on Coast Highway; right on Selva Road, then right into the first parking area. Parking is free; no dogs on the sand; the funicular operates 6 a.m. to 8 p.m. daily, Memorial Day through Labor Day, and 7 a.m. to 5 p.m. on weekends and holidays otherwise. (strandoc.com)