Renowned for its international cuisine and cultural attractions, Miami is also experiencing an artistic rebirth that today draws impressive collections from all over the globe. From fine art to modern works, the individual pieces and comprehensive exhibitions displayed in venues like the Lowe Art Museum and Vizcaya Museum & Gardens reflect Miami’s eclectic history as well as its exuberant future. The museums themselves also lend an added layer of value to the city’s culture, with places like the Bass Museum of Art juxtaposed with the Pérez Art Museum Miami.

From historical retrospectives to a look at contemporary masterpieces, Miami’s diverse museums offer visitors the opportunity to explore varying aesthetics that span centuries and cross continents.

Opened in 1964 to display a donation of Renaissance and Baroque works from collectors John and Johanna Bass, the Bass Museum of Art’s historical holdings mingle with contemporary pieces. The initial collection, which included approximately 500 old master paintings, textiles and religious sculptures, has matured into 3,000 works ranging from 15th-century European paintings and 20th-century tapestries to modern-day photographs and architecture.

In line with its progressive attitude toward art, the museum also has produced Art Public, an unconventional exhibit at Collins Park organized as a collaboration with Art Basel Miami Beach since 2011. The outdoor display features an interesting artistic repertoire that includes large-scale sculptures, installations and live performances. Around 20,000 people come for this exhibition in the park, in addition to the more than 60,000 annual museum visitors.

Another interactive experience at the museum can be found in the Kaiser and Kosh Family Gallery, where the ongoing Art History Lab is set up for visitors to compare artistic styles from different time periods and countries.

A newcomer to the scene, Pérez Art Museum Miami (PAMM) is a contemporary art institution in downtown Miami. PAMM has been a work in progress for three decades (since 1984), when it was known as the Center for the Fine Arts.

Dedicated to temporary exhibits for its first 10 years, the space was then reimagined as Miami Art Museum and included a permanent collection of 20th and 21st century international works.

In 2013, the museum moved into a new $131 million building designed by Pritzker Prize-winning Swiss architects Jacques Herzog and Pierre de Meuron, and was renamed based on a $40 million donation by Latin American art collector Jorge M. Pérez. The new structure, which overlooks stunning Biscayne Bay, offers 200,000 square feet of space for the museum’s collection and exhibitions, educational activities and dining. With a focus on global art from the Caribbean and North and South America, PAMM has cemented its role in promoting the city’s diversity.

Also committed to progressing art education and uniting the community, PAMM offers activities that engage children and adults. From outdoor music series to exhibition tours, academic lectures and performances, the museum encourages visitors of all ages to understand the significance of art to a region.

A National Historic Landmark, Vizcaya Museum & Gardens previously served as the winter home of agriculture industry executive James Deering and today houses an indoor-outdoor collection of his art and artifacts. Myriad cultures and periods of art are represented in items that range from ancient Roman sculptures and Renaissance tapestries to Chinese ceramics.

“Vizcaya is unique in that it’s the only place to see a luxurious estate designed during the Italian Renaissance,” says Suzy Trutie, director of marketing and public affairs. “Vizcaya combines subtropical South Florida elements with the extravagance of Italian-inspired architecture and landscapes.”

Set on Biscayne Bay, the modern rendition of an 18th-century Italian-style villa preserves the vision of Deering, artistic director Paul Chalfin, architect Francis Burrall Hoffman Jr. and landscape architect Diego Suarez, who came up with the plan for Vizcaya more than a century ago. In 1935, a decade after Deering’s death, the mansion opened as a public museum only to close later that same year due to storm damage.

The property was transferred to Dade County (now Miami-Dade) by Deering’s nieces and opened as the Dade County Art Museum in 1953; it later adopted the name Vizcaya Museum & Gardens.

“Even if someone only had one hour to visit, there’s still much to see,” Trutie adds. “I would tell them to enter the main house through the courtyard and visit some of the rooms on the first floor, such as the library, reception room, dining room and music room, then go upstairs to James Deering’s bedroom. Finally, I’d visit the gardens, where there’s a beautiful view of Biscayne Bay.” 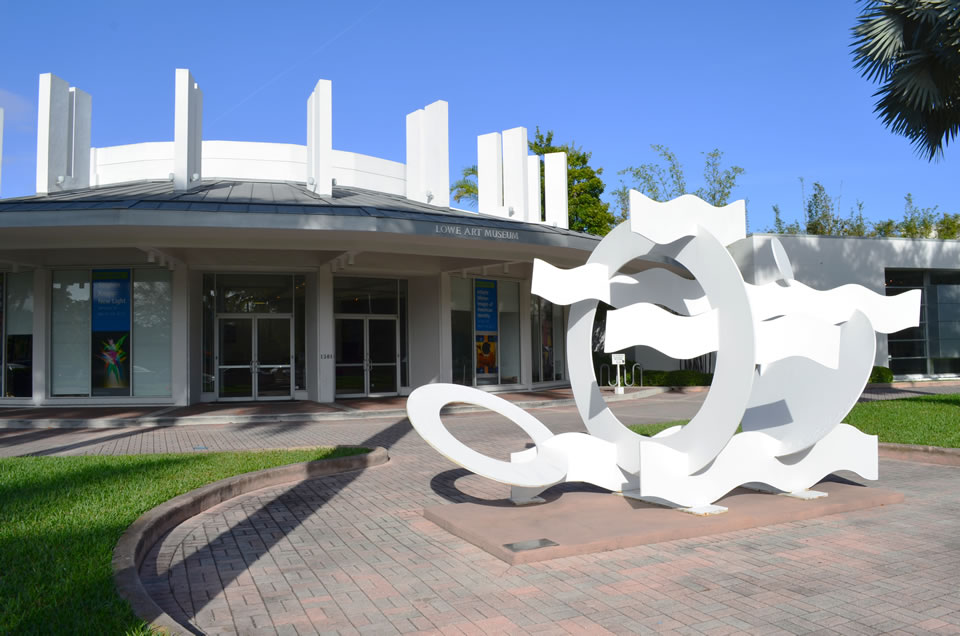 Nestled within the grounds of the University of Miami in Coral Gables and named after philanthropists Joe and Emily Lowe, the Lowe Art Museum grew from its beginnings as a three-classroom exhibit in the early 1950s to a standalone building with approximately 19,000 objects. It’s been deemed one of the most important collections in the Southeast for its size and scope—it’s one of the largest in the South Florida region—and features original works from Asia, Africa, Europe and the Americas.

“Our strong collection of non-Western works is unique to South Florida and really sets us apart from the other museums in Miami,” says communications specialist Raymond Mathews. “We were founded in 1952, so … we’re also the oldest collecting art museum in the area.”

As a university museum, Lowe mostly serves as a teaching resource for college students; however, its scholarly locale enables curators to also present a complete artistic experience for other enthusiasts visiting the campus.

“We tend to be more didactic, more informative than some contemporary art exhibitions you might see,” Mathews says. “We always have a permanent collection in the gallery of works from our African collection, our Asian collection, as well as Renaissance and Baroque. You’re not going to see that at most museums. Most of them focus more on contemporary works.”

In the past decade, Lowe Art Museum has expanded its outdoor sculpture program from the museum grounds to other parts of campus. More than two dozen pieces by local, national and international artists are placed around the university to immerse students and visitors in art.

On the first Thursday of each month during the academic year, the museum also hosts LoweDown Happy Hour, which includes a gallery tour and reception. Designed to broaden and deepen appreciation for the visual arts, LoweDown provides an exclusive viewing of the museum’s current exhibitions.