From local produce to a global approach, Kauai restaurants entice diners with a wide array of flavors.

A feast for the senses, Kauai is known for its natural beauty—verdant hills and cascading waterfalls—but its restaurants also beckon with impressive cuisine starring local produce, exotic tropical fruits, fresh seafood and grass-finished local beef prepared in culinary traditions from around the Pacific Rim and beyond.
Featuring a diverse culinary landscape, the island’s restaurants range from the open-air Garden Cafe, a casual place where patrons can often be found wearing flip-flops, to dressier nightspots such as Bar Acuda and The St. Regis Princeville Resort’s Kauai Grill where smart tropical fashions and silk Hawaiian shirts are suitable. Restaurants on Kauai, no matter how high-end, are nothing if not comfortable. Here, a warm, aloha spirit and relaxed, friendly ambience reign supreme while the food rivals the scenery for attention. 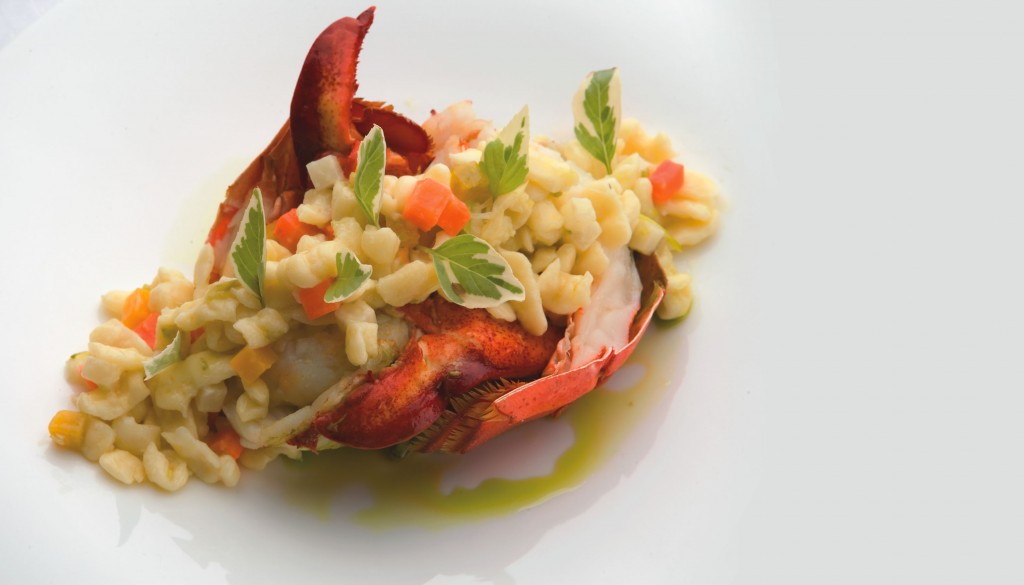 Perched on the same cliff that gives the St. Regis its panoramic views of Hanalei Bay, Kauai Grill is a sophisticated space—one of French chef Jean-Georges Vongerichten’s many Michelin-awarded restaurants. General Manager Antonio Palomares says many diners return repeatedly just to experience this view from the elegantly modern hardwood and leather interior designed around a spectacular nautilus shell light fixture.

Palomares describes the cuisine as “contemporary American with a local influence.” The menu is an eclectic mix of favorite recipes from Vongerichten’s award-winning restaurants like Spice Market and ABC Kitchen with dishes based on seafood, grilled meats and produce grown by area farms. Look for perennial favorites like rice cracker-encrusted bigeye tuna with a citrus-chili sauce and a hearts of palm salad served with avocado and a coconut vinaigrette.

Local foods also are a focus at The Garden Cafe in Kilauea. Part of a 46-acre sustainable resource center called Common Ground, The Garden Cafe is all about eating as locally and naturally as possible. The setting itself plants diners firmly on the North Shore with open-air seating surrounded by a half-acre garden where staff grow more than half of the fruits and vegetables served. This one-time guava plantation has been given new life by local chef Rodman Machado along with his garden and kitchen crews who specialize in oversized “mighty green” salads, fresh wraps, burritos, tacos and a grass-fed Kauai beef burger served with garlic yogurt sauce and tropical, hand-cut fries. 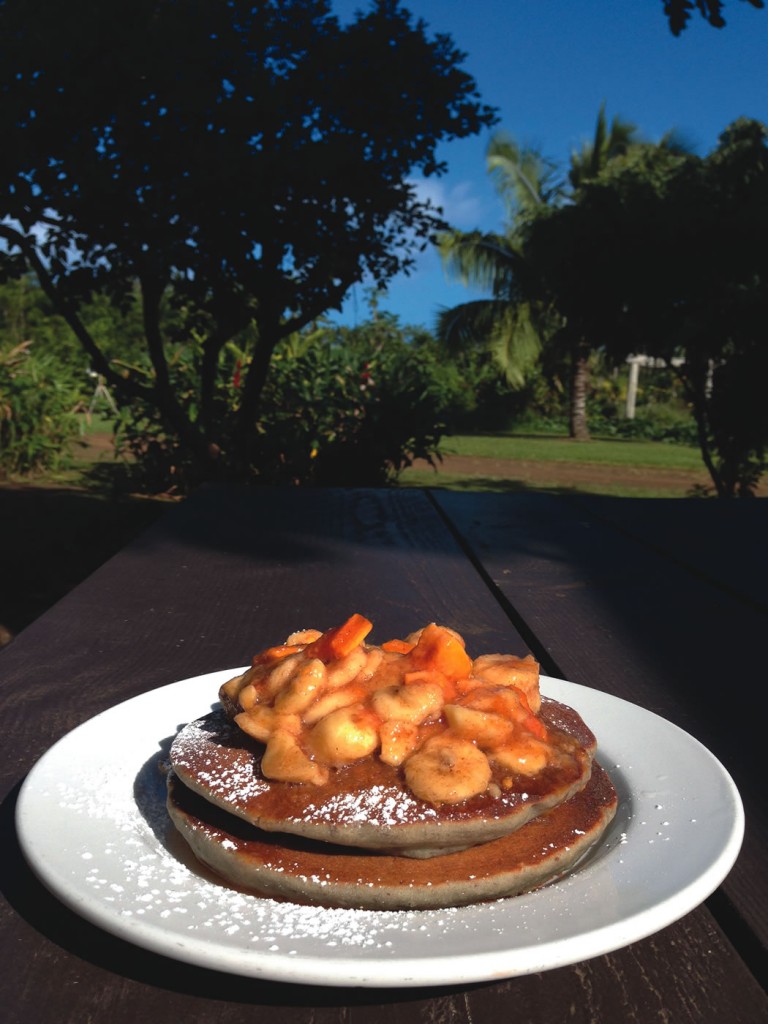 Acai pancakes at
The Garden Cafe

Sourcing ingredients from a network of Kauai producers, Machado says the majority of the food served comes from within a 5-mile radius. The Garden Cafe, open for breakfast and lunch, is a great place to rub elbows with the North Shore crowd while tucking into gluten-free acai pancakes, a papaya bowl with yogurt and Kauai honey or huevos rancheros with kalua pork or beef (baked in an earth oven).

Machado takes the concept of a healthful diet seriously—so much so that his menu includes a full line of cleansing beverages such as cold-pressed, organic fruit juices and teas made with ingredients like the Hawaiian mamaki, cinnamon, allspice and “olena” (turmeric) grown by a farmer on the same road as the cafe. These drinks are designed to cleanse, purify and aid in digestion. After finishing a meal, stroll the garden grounds to get a sneak preview of tomorrow’s dishes.

Area produce also stars at Bar Acuda, where many ingredients are sourced from local farmers, fishermen and even the nearby Hanalei school garden. Lighter dishes and modest portions reflect an emphasis on quality over quantity. Chef Jim Moffat believes that eating well isn’t about heaping mounds of food, but rather simple, honest dishes made with the freshest local ingredients that can elevate traditional country cooking to a high art form. 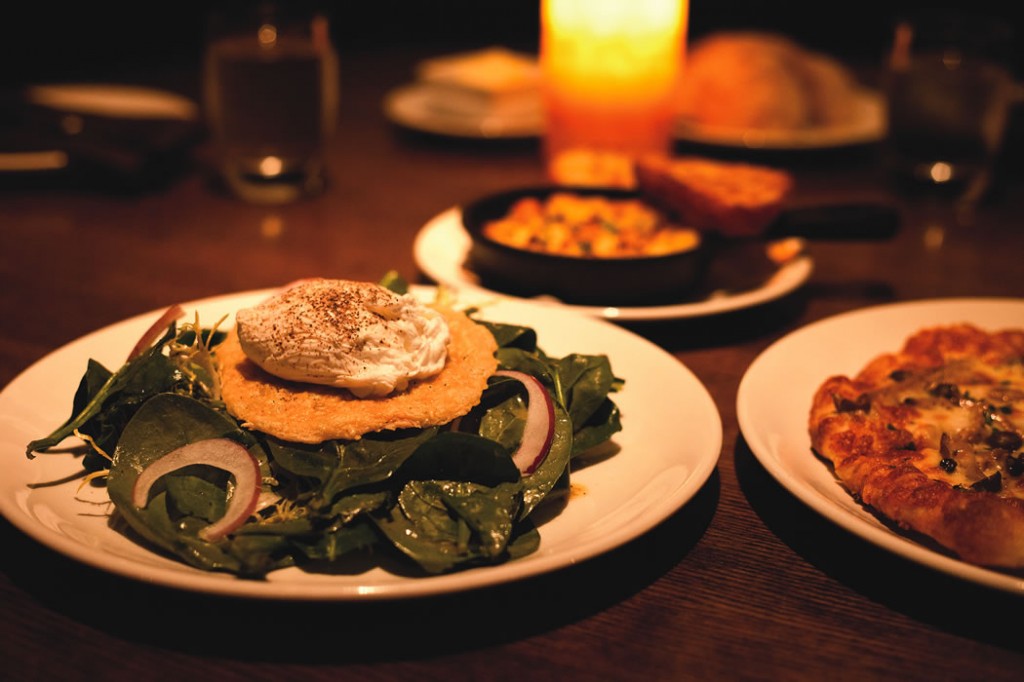 Bar Acuda’s menu is rooted in the concept of tapas—small plates meant for sharing. Dishes are Spanish, French, Italian and Portuguese and include “bacalao” (Portuguese salt cod with garlic, potatoes and cream), local North Shore honeycomb with Humboldt Fog goat cheese and apples, and seared scallop with leek risotto and tomato beurre blanc.

Kauai Grill, too, takes a worldly approach. Michaud says many dishes are prepared in a dynamic way that fuses European, Asian and other influences. A few menu items are strictly French (like the crispy poached egg with caviar and a vodka creme fraiche), but most combine elements from around the globe, prepared using French techniques.

Many cultures—Hawaiian, Chinese, Japanese, Korean, Portuguese and Puerto Rican—have helped shape the island’s culinary offerings. Perhaps less expected, Mexican food also can be found on Kauai. The sleek and modern Tortilla Republic, at The Shops at Kukuiula, elevates south-of-the-border dining to new heights with two stylish bars, a grill and lounge. This is the kind of place for taking a first date (upstairs) or having a fun, lively family dinner with the kids (downstairs).

Open from early morning until well past dark, Tortilla Republic serves a thoughtfully planned menu full of Mexican cuisine that pleases the eye as well as the palate. The options are so richly varied, it’s no exaggeration that visitors could eat three or four meals over a weekend and still find dishes they want to try.
Start with a simple breakfast of Mexican crispas and churro balls served with honey, and then return for a lunch of tacos, burritos or “hamburguesa” (hamburger) and an appetizer trio of salsa de mesa, tomatillo fresca and papaya habanero salsa served with house-made tortilla chips. Signature dinner selections include avocado leaf-rubbed, seared ahi tuna with a jalapeno potato puree and relleno poblano, stuffed with eggplant, spinach and toasted pine nuts. 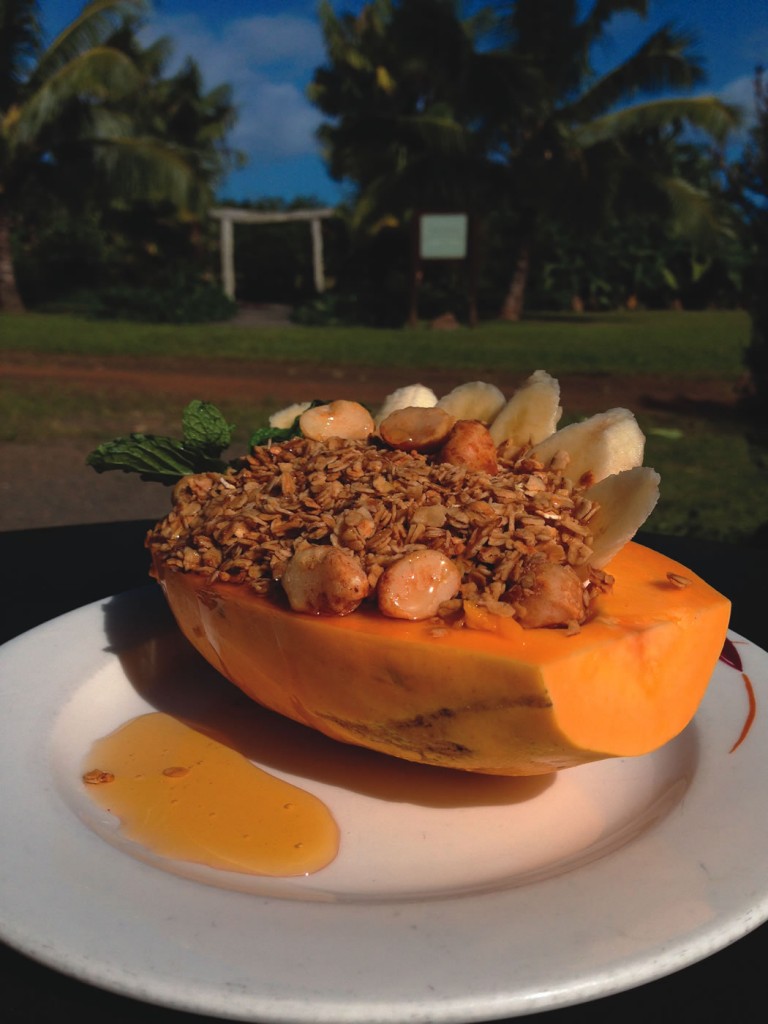 Papaya bowl from The Garden Cafe

With at least 80 tequila varieties, Tortilla Republic is also an ideal place for happy hour margaritas and chili lime fries or after-dinner drinks. The bar is stocked with several types of tequila, which are used to mix flavorful and refreshing signature margaritas like the Skinni (with grapefruit) and Hydration (flavored with coconut water). Margaritas go perfectly with chips and another must-try: the made-to-order guacamole prepared tableside (upstairs only) in a lava molcajete.

Another place to go once the sun sinks below the horizon is Bar Acuda, a North Shore favorite with a cool, casual atmosphere in the surfer’s mecca of Hanalei. Started by Moffat in 2005, Bar Acuda quickly gained a following for its refreshing combination of thoughtfully prepared Mediterranean-style tapas and fine wines. Serving vintages from around 50 wineries, Bar Acuda specializes in California, Spanish and Italian classics, with some French and Spanish varietals. Roughly half of the wines are organic. 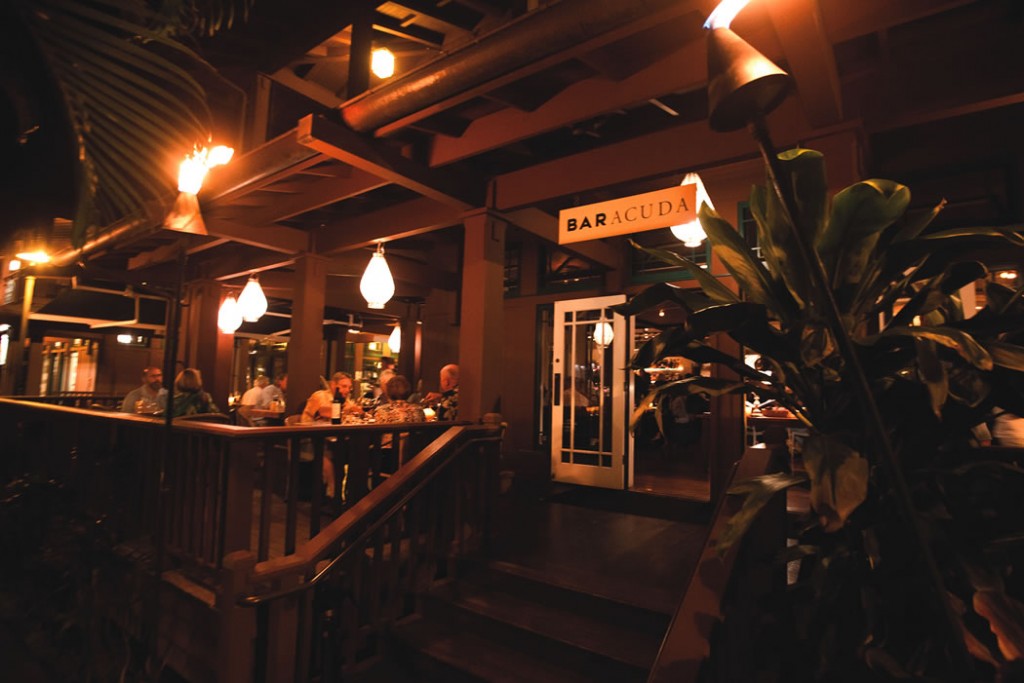 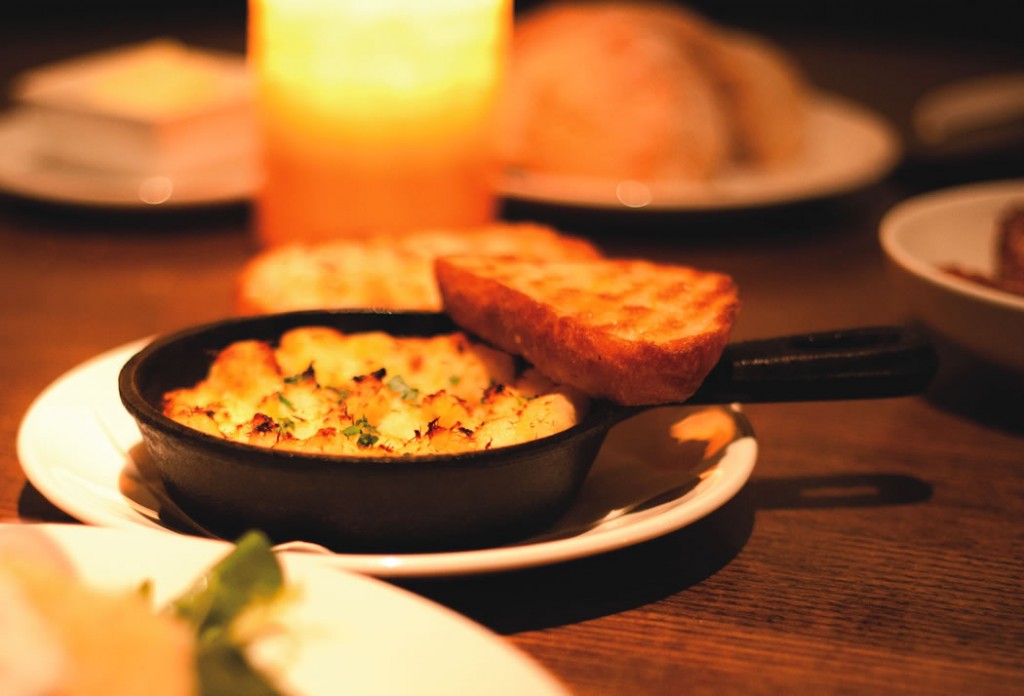 Kauai Grill also features an exceptional selection of wine. This year, the restaurant is introducing the Corvain system, which allows wine to be removed from bottles without pulling the cork. As a result, diners have the chance to try high-end wines by the glass instead of purchasing the entire bottle. And Kauai Grill’s staff is trained to help diners select the best pairings.

For a drink paired with some island history, head over to the recently renovated Mahiko Lounge at Kilohana Plantation. Adjoining Gaylord’s restaurant, a longtime Kauai favorite, Mahiko went from being a charming but underutilized living room in Gaylord Wilcox’s mansion to one of Kauai’s coolest new low-key nightspots.
Gaylord’s has been one of Kauai’s most popular dining spots with locals and visitors alike since it opened in 1986. After a short-lived rebranding, Gaylord’s reopened in 2011 and rapidly regained its dedicated followers. In fact, General Partner Fred Atkins oversaw the transformation of the beautiful 16,000-square-foot mansion’s front parlor into the Mahiko Lounge. 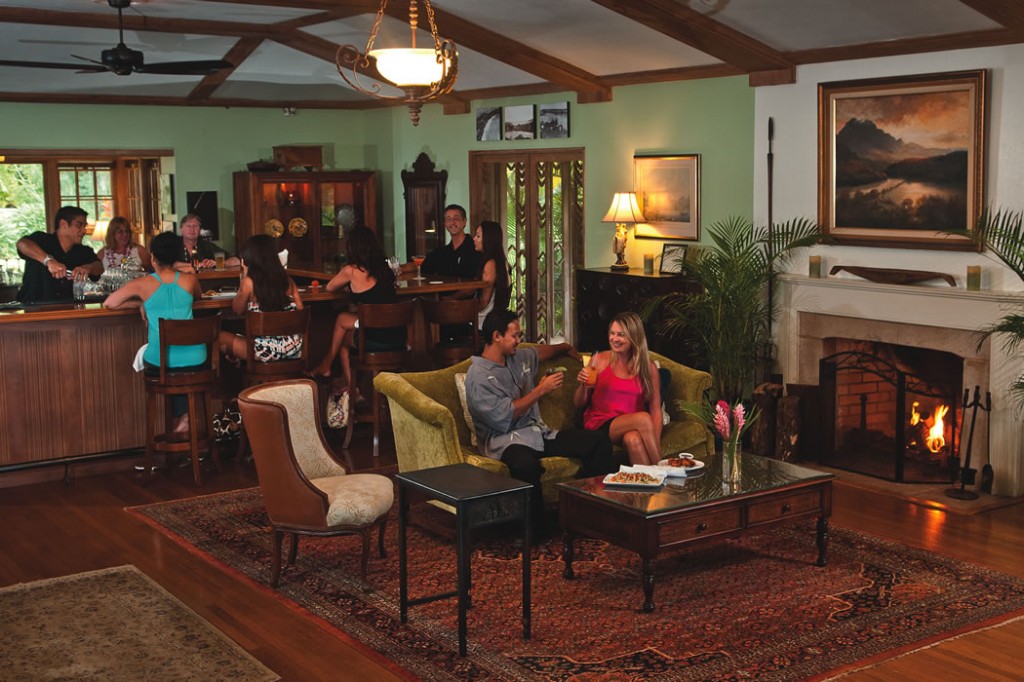 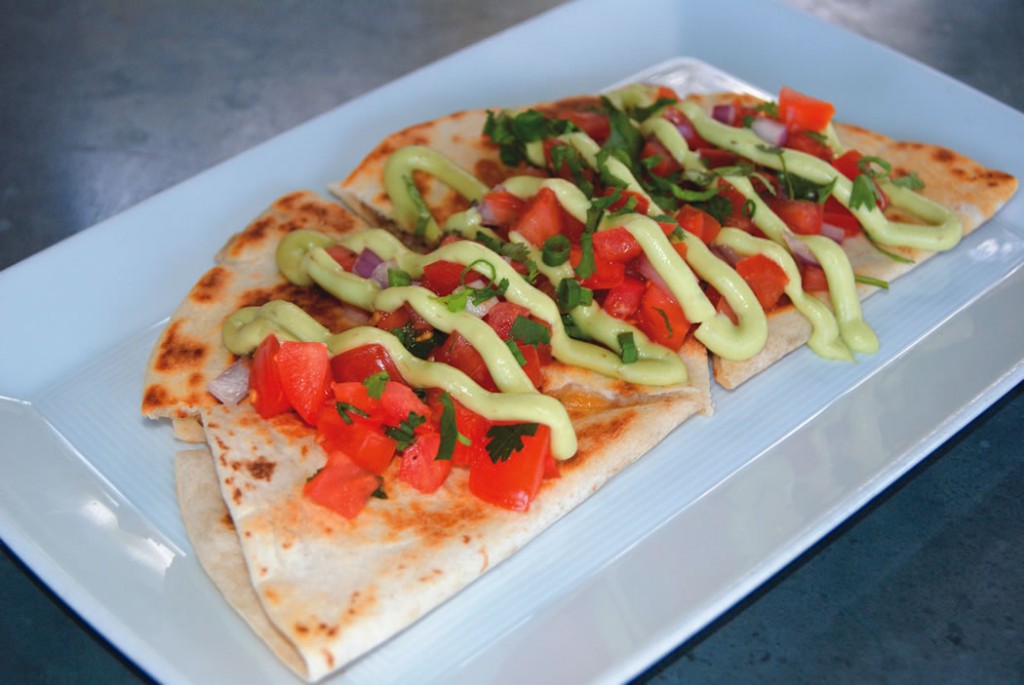 In keeping with Gaylord’s art deco flourishes, the lounge was refinished and redecorated with newly upholstered furnishings—some of which are original pieces—evoking the look and feel of 1930s Hawaii when the sugar cane era was in full swing. Atkins explains how a custom-built solid teak-top bar was commissioned and fitted with English linen-fold molding, which perfectly matches the room’s ceiling. Historical photographs and artwork reveal a Kauai long gone and bring the room to life. 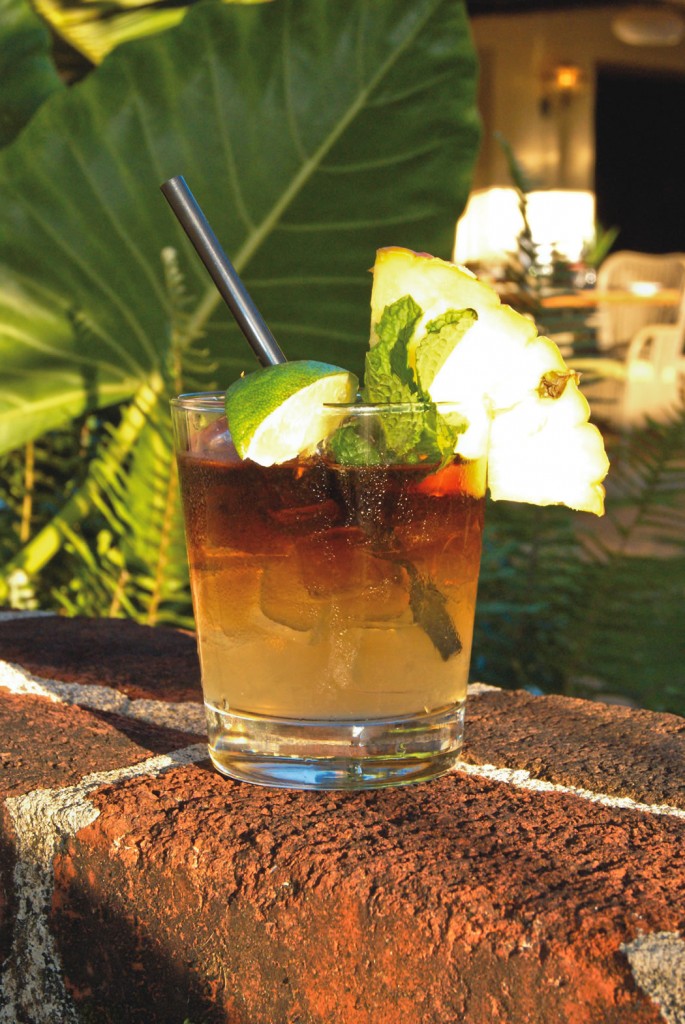 Whether visitors come to Mahiko for the happy hour cocktails and five for $5 pupu special from 4-5:30 p.m. Monday through Saturday, or stay for a full meal (anything on Gaylord’s dinner menu can be served in Mahiko), the lounge is a distinctive and intimate place for food and drinks with family or friends. Try the avocado poke or kalua pork quesadilla and sip on a signature mai tai made with Koloa rum distilled on Kauai.

From local ingredients and creative cocktails to entrees prepared with an international flair, Kauai’s restaurants serve up a delectable array of dishes and drinks that are sure to leave a lasting impression. B