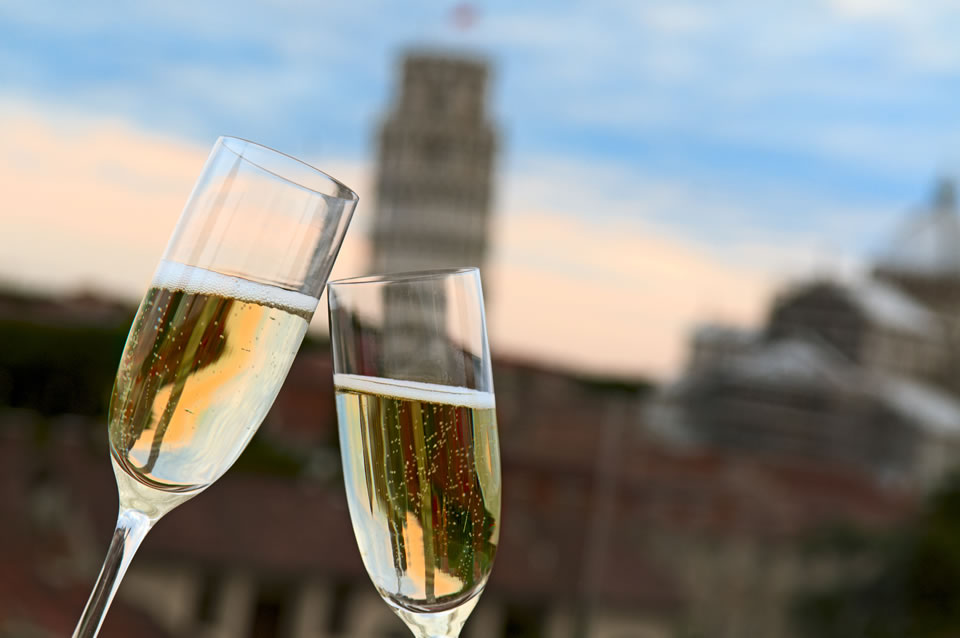 When it’s time for celebration, people often pop the cork on a bottle of Champagne—the bubbly French wine is synonymous with good times and cheer. With a complex flavor profile along with a refreshing clarity and perfect balance of acidity, Champagne has been the go-to choice for superior sparkling wine for many years.

But, recently, a rising star has made an impact on the fizzy libation scene. Prosecco, a sparkling Italian beverage produced about an hour outside of Venice in an area covered by gently sloping vineyards, is a light and fruity alternative. And, although it hasn’t been commercially produced as long as Champagne (which dates back to the 1700s), prosecco has finally come into its own thanks to its taste, price point and interest from sommeliers. That doesn’t mean Champagne and prosecco are interchangeable, however.

“The reputation of Champagne is why so many describe all sparklers as ‘Champagne,’ but doing so does a disservice to both the history and quality of Champagne, as well as to the great sparklers from other regions around the world … [that] deserve to be recognized in their own rights,” says Annie Edgerton, a New York City-based certified sommelier who has worked at a number of the city’s wine auction houses and is certified in the art of sabering Champagne. “Prosecco is also often considered an ‘easier-drinking’ wine, so its fresh style appeals to a large number of consumers.”

And while it’s difficult to find a bad Champagne, that’s not necessarily the case with prosecco, experts warn. “There is a sub-par prosecco in the marketplace, and consumers need to seek out the higher-quality offerings so as not to turn them off prosecco forever,” Edgerton explains.

The varying quality is due in part to the different production methods of the wines. Champagne bubbles are created through a process in which pressure builds up within the bottle, while prosecco bubbles form inside a large stainless steel tank. As a result, Champagne gets better with age and prosecco is best consumed when it’s young and fresh.

There’s also one other major difference between Champagne and prosecco: the cost.

“For the American market, it seems that it is very much about price point,” says Mauro Cirilli, a San Francisco-based sommelier who grew up around 40 miles outside of Italy’s Conegliano and Valdobbiadene regions, where the prosecco grapes, called glera, are grown. “Also, the drinkability of prosecco makes it an ‘all day’ option versus a special occasion wine, as is the case with Champagne.

“We drink prosecco at any time during the day, morning, afternoon and [night],” Cirilli adds of his native town of Veneto. But, he explains, both are excellent choices—and, with a bit of exploration, it’s easy to find an option for every occasion, price point and palate.

The Italian towns of Conegliano and Valdobbiadene—including the stretch of land known as “Prosecco Road” between the two—are home to the world’s best prosecco. Nestled between the Dolomites Mountains to the north and the Adriatic Sea to the south, Conegliano-Valdobbiadene enjoys a temperate climate, good rainfall and fresh winds during the summer—ideal conditions for growing glera grapes.

“The area of Conegliano and Valdobbiadene is … particularly suitable to deliver wines that express finesse,” says Luca Giavi, director of the Prosecco DOC Consortium, based in Italy’s Treviso province. In fact, the region is considered DOCG (Denominazione di Origine Controllata e Garantita), the top designation for Italian food and wines. The Conegliano-Valdobbiadene region is also home to a few notable wineries classified as DOCG, including Mionetto, Perlage and Zardetto.

“Wines from the Valdobbiadene end of the zone are more elegant and mineral while wines from Conegliano are more powerful and round,” says Chris Adams, CEO of Sherry-Lehmann, a New York City-based wine and spirits retailer.

In general, prosecco is known for its freshness, floral and fruity notes, drinkability and moderate alcohol content. And although it has been produced for much longer, the area didn’t start making richer, fuller examples of prosecco until the late 1960s, says Jeremy Reed, an advanced sommelier at The Kitchen Restaurant in Sacramento, Calif.

As a result, prosecco has recently enjoyed an increase in popularity, rising to the top rank of imported Italian wines in the United States. “When people started turning an eye toward these less expensive options, they noticed they are delicious,” Reed says.

Prosecco production follows a more simple and inexpensive process than Champagne. For prosecco, the wine is fermented, refermented in a pressurized tank, filtered and then bottled.

“It is a wine that is best tasted generally up to a year and a half to two years from the harvest,” Giavi says. “For this reason, prosecco’s age statement is not particularly important, unlike Champagne and other wines that improve with age.”

Best served chilled in a large tulip glass—a flute doesn’t allow the bouquet to be released—prosecco pairs well with seafood and cheese like Gruyere and Gouda. “[Prosecco’s] … light weight makes it particularly appreciated by women who find it ideal in many different consumption occasions,” Giavi says. “Not only that, its drinkability makes it ideal in combination with the most important dishes of Italian and international cuisine.”

Charming bed-and-breakfasts nestled into the vineyards north of Venice offer a quiet place for visitors to rest their heads while touring the region of Italy renowned for its prosecco. The drivable distance from Valdobbiadene past Conegliano stretches across the northern end of the province of Treviso, and leads travelers on a tour of wineries tucked away in the rolling valleys.

Conegliano, less than an hour from Venice by train, offers a mellow city center and sites paying homage to the native Renaissance artist Giovanni Battista Cima. Meanwhile, Valdobbiadene invites visitors to expand their prosecco palates by sampling wines by the glass at “osterias” (taverns serving wine and simple food). Those who want to make a day excursion to either region can join guided tours through the area departing from Venice.

East of Paris and along France’s Marne Valley lies Champagne, a terroir that only grows three grapes: chardonnay, pinot noir and pinot meunier. Vines are planted at the region’s northernmost limits, subjecting them to cold winters and just-warm-enough summers, while chalky rolling hills provide ideal drainage to give the sparkling beverage a signature mineral quality.

“The locale in northern France forces the grapes to struggle to ripen, which leads to higher acidity and lower alcohol—both of which are necessary to make a premier sparkling wine,” Edgerton says.

While the area’s location impacts the quality of Champagne, the process known as “champenoise” is what creates the iconic bubbles. The wine is fermented, refermented in the bottle to create the bubbles, and then aged in the bottle on the dead yeast cells to yield distinct flavors and aromas.

“Champagne has higher production standards, and it shows in its product,” says sommelier Jörn Kleinhans, who founded the Wine Elite Society in Southern California to offer guided tastings. “When expense is no object, Champagne will always be the gold-standard selection for the potential of the highest possible flavor complexity.”

Champagne’s standards, experts say, justify its higher cost. According to Kleinhans, one of the most important criteria in producing quality sparkling wine is the integration of the bubbles. “The better this integration takes place, the smaller and longer-lasting will be the bubble stream,” he explains. “Champagne has mastered this highest quality level, and the prices reflect that.”

World-renowned wineries in France that have successfully achieved an impressive method, Kleinhans says, include Moët & Chandon, Bollinger, Krug, Laurent-Perrier, Perrier-Jouët, Roederer Estate and Taittinger. A standout from Moët & Chandon is the 2004 Dom Pérignon, which is hailed by wine critics for precision, freshness and mineral refinement.

The resulting flavor of such superior Champagne evokes green apple, pleasant notes of yeast and a refreshing clarity—but it also has a multifaceted profile, including hints of peach and honey. Compared to other sparkling wines, Champagne tends to pair better with entrees like chicken and black cod, as well as potatoes and toast.

“Not only is Champagne delicious on its own, but it is incredibly versatile in regard to food and wine pairing,” Edgerton says. “The elevated acidity and effervescence from the bubbles can slice through a creamier sauce, and the toasty brioche notes of many Champagnes ground it so it can stand up to a heartier dish.”

Champagne is divided into vintage and nonvintage styles. Nonvintage refers to a blend from multiple years, carefully cultivated for consistency and made in a style specific to each producer. Meanwhile, vintage is a wine designated with the year—and declared only if the conditions were optimal. Many producers are excited about the potential for 2012 and 2013 vintages, though both are still aging and have not yet been released, Adams says.

While the small differences between Champagne and prosecco may be subtle to some, each of the characteristics—the region, type of grape, production method, flavor profile and price point—lead to distinctly different sipping experiences.

The historical, charming region of Champagne is just 100 miles east of Paris—easily accessible in a couple hours or less via high-speed train, boat or car. Reims and Épernay are the major cities for production of the effervescent spirit; the former is also a hub for architecture and history and the latter the home of top Champagne houses like Mercier, De Castellane and Moët & Chandon.

Those visiting the three expansive wineries in Épernay descend into the depths of subterranean cellars for an up-close look at the fermentation process and storage tunnels. Alternately, those who seek a quieter, more private excursion may opt to rent a car and traverse the Routes du Champagne between the two cities. The stretch of rolling hills is home to several family-run wineries and vineyards.

Travelers arriving via rail will arrive and exit through Reims; while there, explore sites like the original Cathédrale Notre-Dame de Reims, where the first king of the Franks was baptized, and the Musé des Beaux Arts. For those who wish to stay overnight, a handful of hotels are available with experiences that range from the historic to the contemporary.