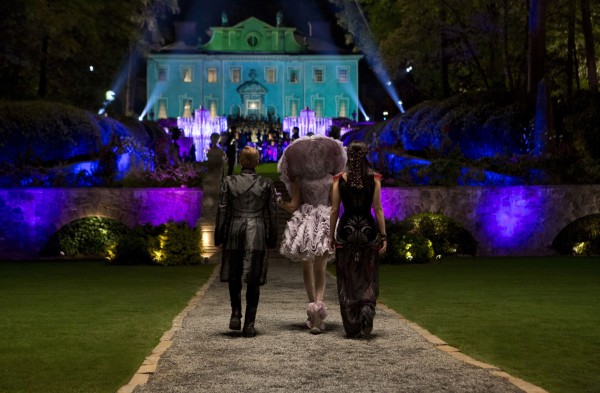 Atlanta and its diverse locations serve as a magnet for Hollywood filmmaking.

Atlanta possesses a special kind of dynamic duality that attracts visitors from around the world, including Hollywood filmmakers. On the one side, Georgia’s capital exudes an urbane Southern allure with its country music, delectable cuisine and friendly residents. Such charm translates to the city’s framework, a contrast of modern and 19th-century Gothic architecture, as well as its diverse arts scene—Atlanta is one of the few American cities with a permanent resident company for all the major performing arts: opera, ballet, music and theater. 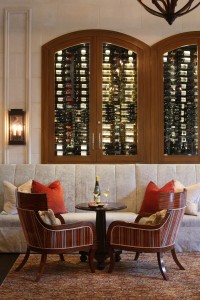 The St. Regis Atlanta Wine Room and Bar is a popular filming location for its elegant decor and atmosphere. | Sara Hanna Photography

But there is also another side of Atlanta, which has a multiethnic, cosmopolitan flavor due to a steady influx of immigrants from other states and countries who want to make the city their new home. This blending of many backgrounds brings a vibrancy to the area along with skilled workers and a wide casting pool for acting extras to fit a variety of looks and characters, which is a key component of Atlanta’s booming film industry.

“There’s a lot of native Georgians here, and then [there are] a lot of people [who] have come in from outside,” says Lee Thomas, director of the Georgia Department of Economic Development’s film, music and digital entertainment division. “It’s kind of a cultural melting pot.”

This sociological duality is one of the reasons why Hollywood film production in the state has seen a dramatic rise in the past decade: The economic impact increased from $244 million in 2007 to more than $3 billion in 2013, and it doesn’t show any signs of slowing down.

One of Atlanta’s numerous advantages for filmmakers includes the Hartsfield-Jackson Atlanta International Airport. Considered the world’s busiest airport for passenger traffic since 1998, Hartsfield-Jackson was one of the reasons why “The Hunger Games” sequels—“Catching Fire” (2013) and the upcoming “Mockingjay, Parts 1 and 2” (2014 and 2015)—chose Atlanta as their primary filming location. The airport offers several direct flights a day from Los Angeles and, considering that the science fiction/action franchise had more than 30 actors arriving on site, it serves as a considerable advantage over the city’s competitors. 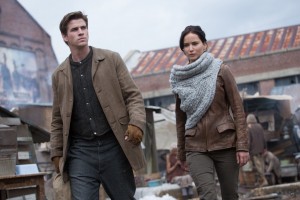 But as LaRonda Sutton, director for the Atlanta Office of Entertainment, points out, it is the city’s multifaceted qualities and its 30 percent tax credit for qualified film productions that bring major projects like “The Hunger Games” back for filming.

“Atlanta has become a magnet [for] film production because of the tax incentive; it is financially beneficial to the studios to film here,” she says. “I would describe Atlanta’s character as being known for so many great varied locations throughout the city, as well as there being so many different people here.”

Some of those Atlanta settings were creatively chosen by “Catching Fire” director Francis Lawrence and adapted to match the futuristic, dystopian nature of Suzanne Collins’ best-selling “The Hunger Games” series. The crumbling, graffiti-ridden Pratt-Pullman Yard complex on Atlanta’s East Side, as well as the farm and old historic buildings of the Goat Farm Arts Center in West Midtown, were used for key District 12 scenes. The Murphy Avenue warehouses were redesigned as the town square and the Justice Building of District 11.

The Quarter Quell arena scenes were filmed at the picturesque International Park Beach, which was also the location for the 1996 Summer Olympics beach volleyball tournaments. The 125,000-seat Atlanta Motor Speedway became home for the chariot parade while the classic Swan Coach House—part of the Atlanta History Center—was transformed into the mansion of President Snow (Donald Sutherland). 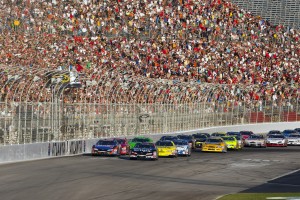 And the Georgia World Congress Center—another popular Atlanta location that filmmakers love—was used for all three “The Hunger Games” sequels and represents the Atlanta airport in many other features when it’s not being used to host trade shows. “Because we have the world’s busiest airport, it’s very tough to film, especially to get the permission and the time frame that most TV and feature films need it,” Thomas says. “So, the Georgia World Congress Center is a great stand-in for it.”

Although the Georgia World Congress Center was not used in “Flight,” the 2012 drama about an airline pilot who crash-lands a plane, many other key locales enhanced the story’s Atlanta setting. While the plane’s interior scenes were filmed at EUE/Screen Gems Studios, Emory St. Joseph’s Hospital, a business suite at Turner Field (now set for demolition) and the Atlanta First United Methodist Church on Peachtree Street played important thematic roles as the main character, Whip (Oscar winner Denzel Washington), deals with alcoholism spiraling out of control.

The Wine Room at The St. Regis Atlanta also made a cameo in “Flight.” In one scene, Washington and Oscar-nominated actor Don Cheadle, who plays the role of an attorney in the film, meet over breakfast in this dynamic space at the resort. Dawn Truemper, area director of sales and marketing, was very pleased with the professionalism of the cast and crew, and also impressed with their creative ingenuity when a unique problem arose during the shoot.

“We received a call from production asking if they could saw the legs off of one of our chairs because Denzel was appearing too tall in the scene,” she says. “They sawed the legs right off the chair.” 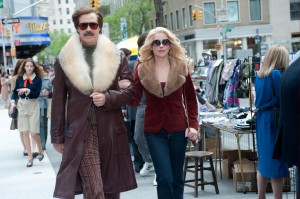 Scenes from “Anchorman 2: The Legend Continues” starring Will Ferrell (left) and Christina Applegate (right) were filmed throughout Atlanta. | © Paramount Pictures/Photofest

“When many productions are considering our address, they ultimately choose us because it will require less set dressing and decor,” she says. “The St. Regis Bar is definitely the most requested location thanks to our iconic “Resurgens” mural and dark, masculine atmosphere.”

The city also receives plenty of screen time in comedies such as “Anchorman 2: The Legend Continues” (2013) featuring Will Ferrell. The story follows broadcaster Ron Burgundy (Ferrell) from San Diego to a 24-hour news channel in Manhattan. Of course, the fictional GNN station was built in a Westside warehouse in Atlanta and other scenes were filmed everywhere from a mansion in Buckhead to the Silver Skillet restaurant, Woodruff Park and Atlanta Motor Speedway where Burgundy’s RV flips across the roadway.

“Million Dollar Arm” is just one of many well-known sports movies to be filmed in Atlanta. Several Atlanta dwellings were used in another baseball film, the Jackie Robinson biopic “42” (2013)—which samples almost every cultural facet of the U.S., from New York to California and Pittsburgh.

Meanwhile, the Clint Eastwood baseball feature “Trouble with the Curve” (2012) shot many of its Atlanta scenes at Turner Field, home of the Atlanta Braves and nicknamed “The Ted” after media mogul Ted Turner. In order to represent the film’s North Carolina settings, director Robert Lorenz utilized some of Atlanta’s local eateries, such as Two Urban Licks near The Carter Center, the Silver Skillet on 14th Street, George’s Bar & Restaurant on Highland Avenue and, especially, the Home Grown restaurant on Memorial Drive, whose 1950s diner counter and stools and knotty pine walls perfectly capture the Southern flavor of the film. 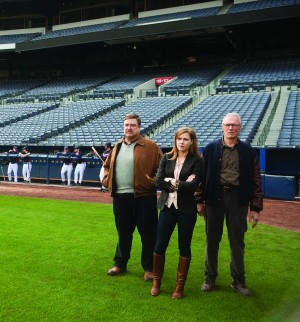 Many scenes in “Trouble with the Curve” were filmed at Turner Field, the Atlanta Braves’ stadium. | © Warner Bros./Photofest

In addition to sports films, Atlanta has provided the scenery for several action movies including “The Fast and the Furious” franchise. For the Rio de Janeiro setting of “Fast Five” (2011), the Georgia Dome became host to an extravagant car party. Production designer Peter Wenham converted the abandoned Pullman train yard—adding rusted car parts, auto-plant rails and constructing smaller buildings within the main structure—into a warehouse where Dominic’s (Vin Diesel) crew set up its headquarters. And Atlanta continues to be a favorite locale for the franchise; “Fast and Furious 7” was set to be completed earlier this year after being delayed because of the tragic accidental death of star Paul Walker.

For the action thriller “Prisoners” (2013), starring Oscar nominees Hugh Jackman and Jake Gyllenhaal, Atlanta’s rare ability to exude a small town atmosphere was harnessed in order to symbolize the Pennsylvania setting of the story. A house on Jefferson Terrace played home to Nancy and Franklin Birch (Viola Davis and Terrence Howard) and some scenes were shot at the South Fulton Medical Center on Cleveland Avenue.

As long as there are movies being made, the Atlanta film industry will continue to thrive. Actor Jack Black will be in Atlanta this year to star in the movie adaptation of R.L. Stine’s children’s horror book series “Goosebumps.” And producers have announced that “Insurgent,” the next installment in the dystopian “Divergent” trilogy, will be filmed partly in Atlanta. “Divergent,” the first part of the franchise adapted from the young adult books by Veronica Roth, debuted in spring. 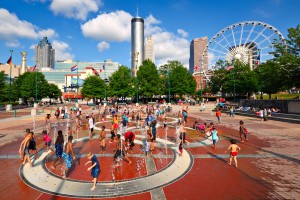 With so many popular movies filmed in Atlanta, an entire tour can be made of the diverse set locations. For those interested in visiting the area’s filming sites, Thomas recommends visiting the website cometourgeorgia.com to map a route. Sutton suggests exploring parks that were used in films and television shows, such as Centennial Olympic, Piedmont and Woodruff parks. And Truemper encourages all who want a taste of cinematic class and refinement to stay at The St. Regis Atlanta and enjoy a drink at The St. Regis Wine Room and Bar, savoring and celebrating the city as one of the country’s premier film capitals.