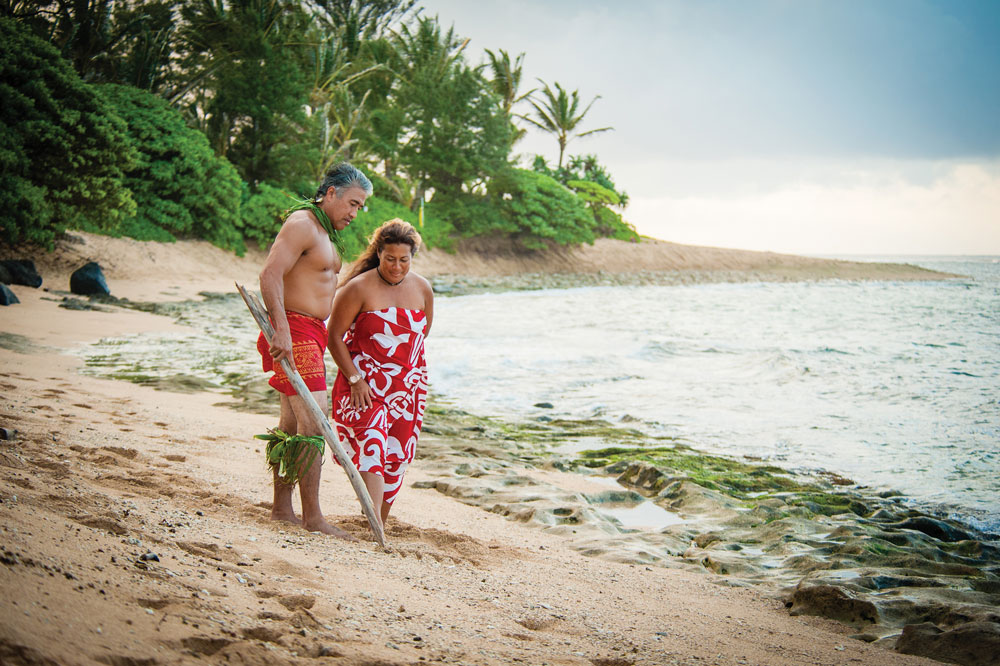 While enjoying the many entertainment activities that The St. Regis Princeville Resort has to offer, guests may begin to think they’re seeing double, triple or possibly even quadruple.

If, during a poolside celebration, a guest catches a glimpse of the fire-knife dancer’s exotic visage through the glow of flames, he might begin to feel a surreal flash of deja vu. Is the firelight playing tricks on his eyes or has he seen that very same face, now intense in concentration, patrolling the resort on official business with a ready smile? And, isn’t that the same joyful expression of the guitar player from New Year’s Eve?

This perplexed guest is not descending into madness or seeing restless Hawaiian spirits—he has simply had the good fortune to encounter Coppin Colburn, a perennial St. Regis Princeville guest favorite, in several of his many diverse roles. Reminiscent of the children’s book series “Where’s Waldo?” Colburn has created a loveable omnipresence throughout The St. Regis Princeville Resort—and guests love to seek him out.

An extraordinary property attracts exemplary people, not only as guests, but as staff members as well. Colburn is a versatile, intriguing character with a wealth of talents, who joyfully shares his many gifts with grace and “aloha.” 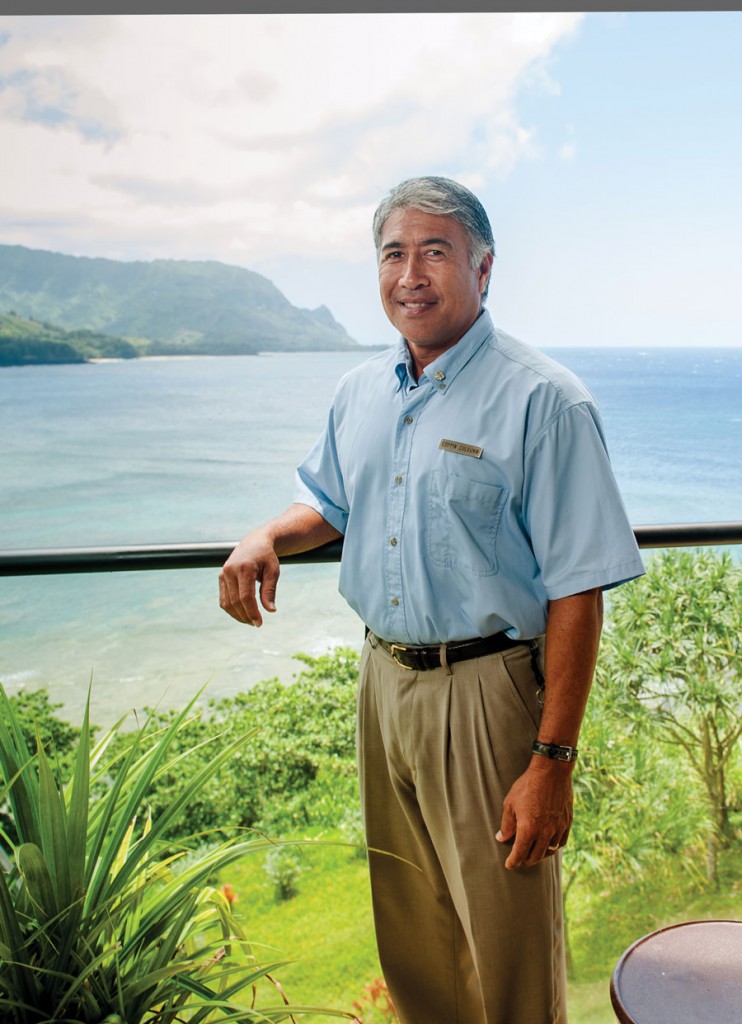 Colburn’s journey to director of security for The St. Regis Princeville Resort began on Oahu, where he was born in 1961. Like so many in the islands, he boasts a diverse heritage, including Hawaiian, Tahitian, Portuguese, Japanese, English and French.

Colburn began his security career at the Hilton Beach Hotel in Waikiki in 1984, where his dedication and commitment to excellence quickly propelled him to the top. Hired as a security officer, he was promoted to director within the month. In 1990, after receiving the Hawaii Hotel Association’s (now Hawaii Lodging and Tourism Association) coveted “Security Officer of the Year Award,” Colburn relocated to Kauai at the request of his wife and brought his professionalism to The St. Regis Princeville Resort.

During his career with the St. Regis, Colburn has garnished countless accolades and awards, which he humbly keeps tucked away inside a file cabinet. He takes great pride in his role as leader of the security team but feels no need to display the badges of his success.

Colburn was raised in a large family of entertainers. For as long as he can remember, the family would regularly gather for “paina” (a large feast), to play music, dance hula and celebrate one another’s company. Everyone would take turns getting up to play and dance for each other, except Colburn, who was painfully shy, and only found his way to the guitar later in his teens.

Today, Colburn has transcended his shyness and music has become an integral part of his life. No longer afraid to showcase his talent, he sings and plays guitar in two very different bands. Wili is a Top 40 dance band that rocks the resort’s annual New Year’s Eve bash and plays many of the wedding receptions held at The St. Regis Princeville Resort. His Hawaiian band, Maluhia, performs in The St. Regis Bar every Friday night. Tuesday evenings finds Maluhia at the Mediterranean Gourmet in Haena performing for the weekly luau. This luau is very dear to Colburn’s heart, as he gets to share it with his wife and four daughters who dance hula to his accompaniment.

Music has not only helped Colburn find his voice, but has also encouraged him to dive deep into the hidden lessons of his culture. Woven throughout traditional Hawaiian music are the legends and stories that define a culture, and for Colburn the music is a portal to the past. He relishes the opportunity to share one of the ancient stories of Kauai Friday evenings in The St. Regis Bar. Sunset will find Colburn blowing the conch shell to call everyone to gather.

As the crowd gazes out on the glory of Mount Makana, set regally beyond Hanalei Bay, Colburn relates the enchanting tale of the oahi ceremony where brave warriors would scale Makana’s heights, set fire to dried branches and hurl the flames from the mountain’s peak to entertain kings and chiefs. Colburn wears this, and all of his many hats, with unwavering dignity and aplomb. 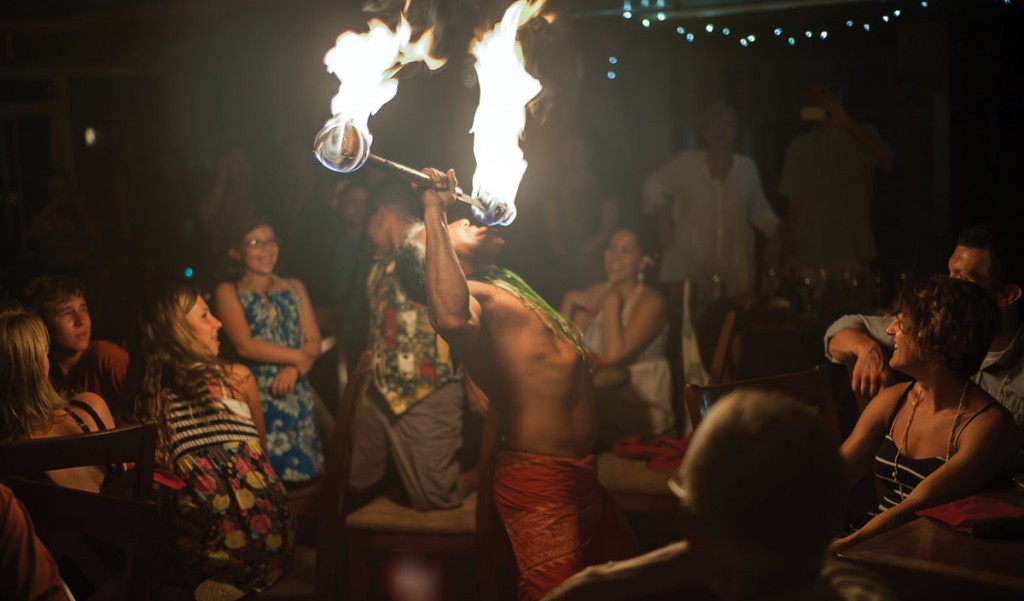 “Marriage and parenting is the hardest work in my life, and the most rewarding. When I think about what I still want to accomplish, it’s about continuing to make progress as a husband and a father,” says Colburn, who looks to his culture and his church for guidance in raising four girls. “Hawaiian is a unique language in that it contains no mean or bad words, which means you can’t say anything bad about anybody. We follow that example at home.” 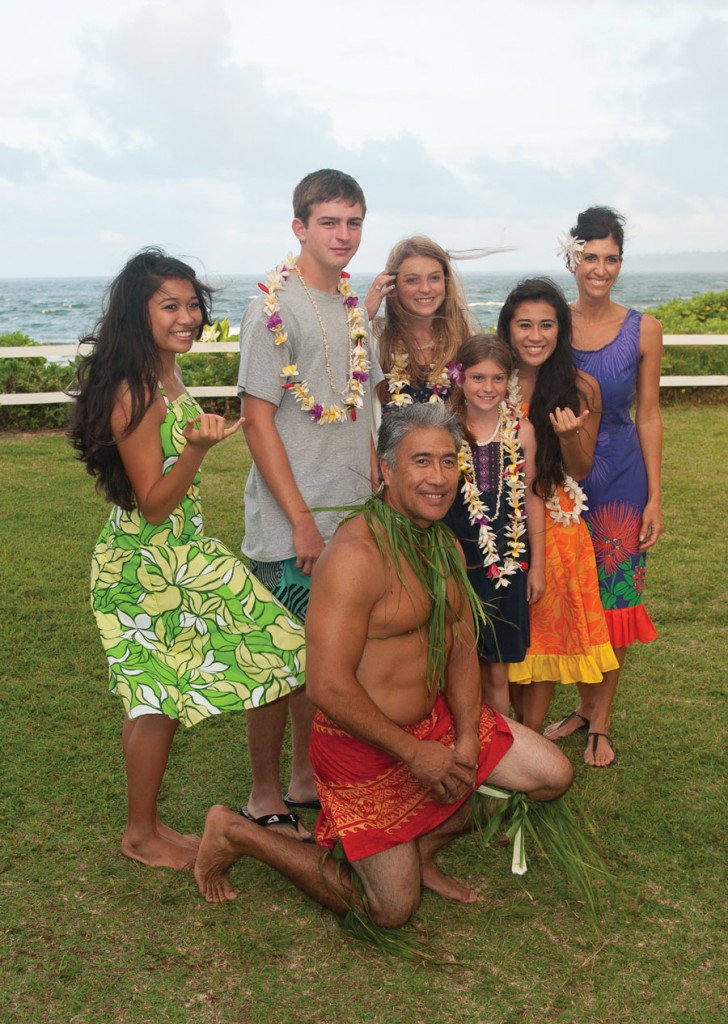 The family gathers each night to share dinner, revel in each other’s company and bask in the pristine beauty of a simple life. Colburn is also passionately devoted to his service in the Church of Jesus Christ of Latter Day Saints in Hanalei, where he works with the youth demonstrating and teaching the same guiding principles he shares at home: integrity and “ha‘a ha‘a.” “It’s about being honest, respectful and good to others,” he says. “I try to do a good deed everyday so I can go to bed happy with myself.”

When he’s not protecting or entertaining guests at the St. Regis, performing at luaus, organizing church youth activities or gently steering his beloved daughters toward adulthood, Colburn can be found playing competitive volleyball, riding horses in shorts and bare feet, studying Hawaiian music or painting the natural beauty of Kauai.

Unruffled and smiling as he catalogues his many responsibilities, Colburn is an inspiring example of a man who is clearly living up to his potential and giving his very best to his job, family and community. “I don’t know,” he says. “I guess I get bored easily. I like to do a lot of different things.”

When asked when he’s the happiest, his eyes light up and he does not hesitate, “When other people are happy.”