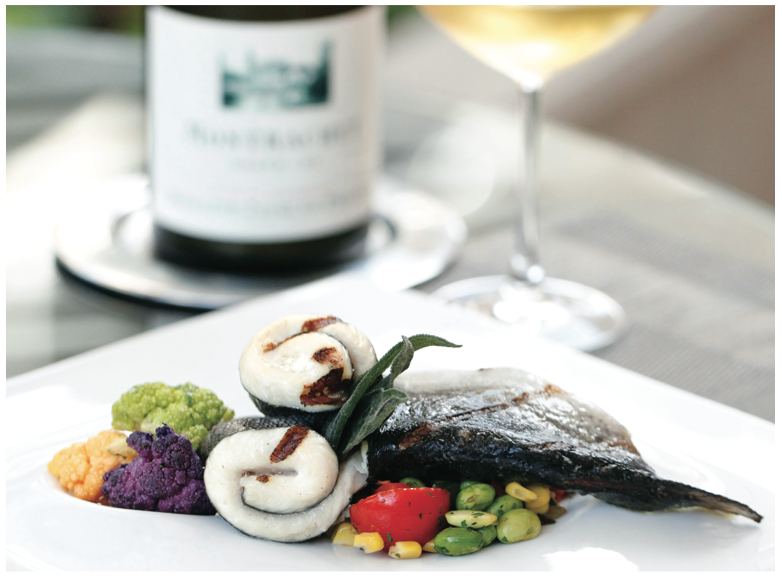 This spring, The St. Regis Atlanta welcomed new Executive Chef Joseph Trevino into the fold. Trevino, who most recently worked as executive chef at the Westin Charlotte in Charlotte, N.C., has spent his career honing his craft at some of the most highly respected resorts across the country. He prides himself on his ability to connect with diners through classic dishes reinvented with his signature twist. A knack for experimentation, mixed with the right amount of experience and finished off with a dash of imagination makes him a welcome addition to the kitchen at The St. Regis Atlanta. 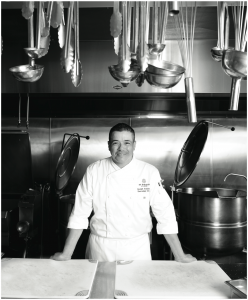 The Makings of a Chef

Trevino was born in Los Angeles, but describes Tucson, Ariz., as his adopted hometown. Both locales had a substantial impact on his culinary preferences. “There was a huge Latin influence in terms of the foods I grew up with,” Trevino explains. “I experimented with spices, often playing with traditional dishes.” But despite his foray into the culinary world, Trevino had no intentions of pursuing a career in the kitchen. Instead, he planned to go to college to earn a degree in English or communications, which he hoped would eventually lead to a role in secondary education.

It wasn’t until he landed his first cooking job at a small Italian restaurant in Tucson that Trevino considered making a career out of his love for cooking. The experiences he had there led to a lifelong love affair with authentic Italian cuisine. 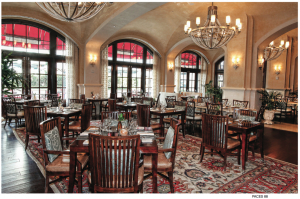 “I love making mozzarella from scratch,” Trevino says. “I can appreciate a good quality dried pasta, but I love making fresh ravioli, especially with a mounted butter sauce with fresh herbs.”

An abiding love for fresh ingredients and simple dishes dominate Trevino’s culinary philosophy. He also believes in experimentation and immersion in all things food-related. “I am constantly reading and absorbing all media related to food,” he says. “My approach to food is simple … I immerse myself in the local scene, discover unfamiliar flavors, unique local flair and perhaps rediscover old favorites; then I blend with clean, simple, tasteful presentations and the freshest ingredients available.”

His kitchen staples include extra virgin olive oil and a special herb blend of basil, tarragon, thyme, chives and Italian parsley. In addition to being mindful of the ingredients that go into each dish, Trevino also believes in using the venue, its service and its food to create an entertaining atmosphere for diners.

This philosophy, as well as his ability to absorb the best of his culinary surroundings, has served Trevino well throughout his career. He set his sights on the region’s most bespoke resorts, and has lived and worked in a variety of locations around the country. He completed his internship at The Boulders Resort, a AAA five-diamond resort in Carefree, Ariz. After that, he spent five years at the Loews Ventana Canyon Resort in Tucson. From there, Trevino moved to the East Coast to work as the chef de cuisine at another Loews resort in Miami, and Dux at The Peabody Orlando. Trevino’s first executive chef role came at the Canyons Resort/Grand Summit Resort and Spa in Park City, Utah. Finally, Trevino completed a yearlong role as executive chef and beverage director at La Torretta Lake Resort and Spa in Houston before heading back east to Charlotte. “I had the great pleasure of working with world-renowned chefs Albert Roux, Michel Roux and their consulting team,” Trevino says of his experience at La Torretta.

While Trevino was traveling around the U.S., gathering ideas and inspirations and gaining experience at some of the country’s finest resorts, he had his heart set on working at a Starwood property. In Charlotte, he had the opportunity to work at the Westin, but when the executive chef position at The St. Regis Atlanta opened up, Trevino knew he had to apply. “I was very familiar with the St. Regis brand, and Atlanta was an enticing location for me,” he says. He is especially interested in the cuisine at various trendsetting restaurants in Atlanta, such as Spice Market at W Atlanta Midtown. “I wanted to surround myself with guests who expected great food,” Trevino says.

Trevino’s reputation and experience at other resorts soon convinced The St. Regis Atlanta staff that he was the best chef for the job. “Chef Trevino’s dedication and passion for the culinary arts, paired with his exceptional background, make him the perfect fit for this position,” explains Simon Rusconi, general manager of The St. Regis Atlanta. “In addition to his obvious culinary skills, Trevino’s experience working at other bespoke resorts means that he understands the atmosphere the St. Regis strives to maintain. He is adept at catering to a diverse clientele, and providing the utmost service and culinary experience no matter the circumstance,” he continues. “We warmly welcome him to The St. Regis Atlanta and look forward to experiencing new creations as he lends his unique touch to the local Atlanta scene.” 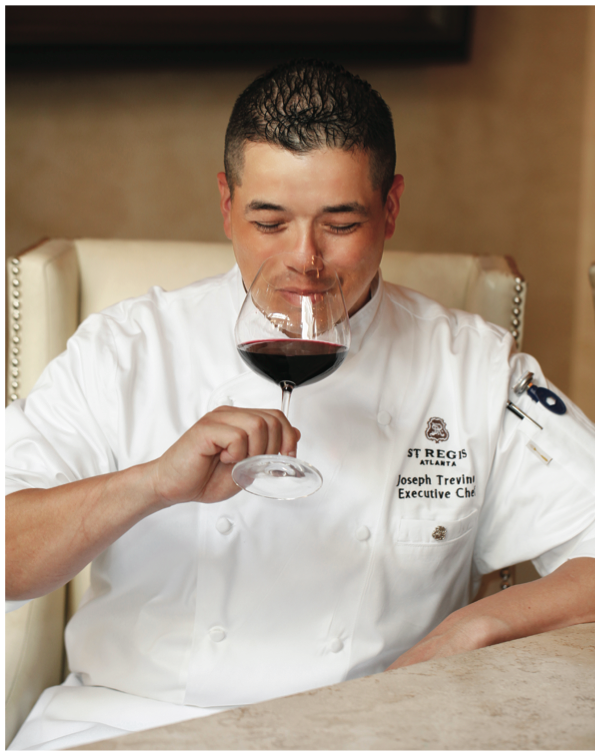 Although Trevino is still new to Atlanta, he is excited to immerse himself in the city’s dining scene. At the moment, he is particularly fond of East Atlanta’s Holy Taco, a taqueria that focuses on sustainable local ingredients. “I think the diversity [of Atlanta’s dining scene] is great,” he says. He mentions that Anne Quatrano, the chef and owner of Bacchanalia, one of Atlanta’s most critically acclaimed restaurants, recently came to the St. Regis for lunch.

The sheer number of dining options in the city excites Trevino. “I’m ready to dive into the restaurant scene,” he says. “I love exciting new food; it gets my creative juices flowing.” While Trevino admits he can be hypercritical when eating in other establishments, he takes pride in evaluating food for what it was meant to be, especially in terms of what he calls the “flavor profile.” After that, he takes his observations back to the kitchen, talks about it with his staff and figures out a way to put a new spin on the dish— good dishes beget better ones in Trevino’s kitchen.

Trevino also knows that sometimes, being an innovative chef means overcoming certain aversions in the kitchen. “I despised raw tomatoes when I was growing up,” he recalls. “But my first executive chef was Swiss-Austrian, and he forced me to taste everything, even knowing how much I hated tomatoes.” Eventually Trevino grew to enjoy them. Another important cooking philosophy he has is that of simplicity. “I like to keep both my plates at home and my plates at the restaurants very clean, with only three or four ingredients,” he explains. That kind of simplicity brings out the flavors of each ingredient, thus making for a more enjoyable meal.”

Trevino is already brimming with ideas for the menus at The St. Regis Atlanta. The secret to success, he believes, is to identify the restaurants’ audience and find the best ways to connect with them. That means appealing to St. Regis guests as well as visitors to and residents of Atlanta. The staff then works to create familiar dishes made with quality ingredients that include both a distinctive St. Regis and a chef Trevino spin. Of utmost importance to him is that guests connect with a dish visually as soon as they sit down in a St. Regis restaurant.

Trevino hopes to distinguish Paces 88 as elegant dinner venue for the Atlanta audience. He believes the key to achieving this goal will be his ability to create a connection with diners through dishes they know and love.

Rusconi believes that Trevino’s established success in experimentation bodes well for this goal. “While the core dining program at Paces 88 will remain the same, guests will see a few new touches to the menu,” Rusconi explains. Trevino is also being challenged with creating a few bourbon-inspired entrees for Paces 88, to accompany the release of The St. Regis Special Selection’s third vintage bourbon. Rusconi notes that The St. Regis Atlanta was the first hotel in Georgia to create a personal bourbon blend.

The fantastic combination of Trevino’s culinary sensibilities and past experience makes him the perfect person to lead the kitchen of The St. Regis Atlanta toward its goal of providing guests with unique dining experiences. “We pride ourselves on having perfected the traditional and timeless art of hospitality— marrying the art of food, wine and service,” Rusconi says. “Chef Trevino shares in this passion and is thereby an integral part of achieving this goal.”

Atlanta diners and visitors can now experience for themselves the unique blend of creativity and tradition that chef Trevino brings to the tables of The St. Regis Atlanta.