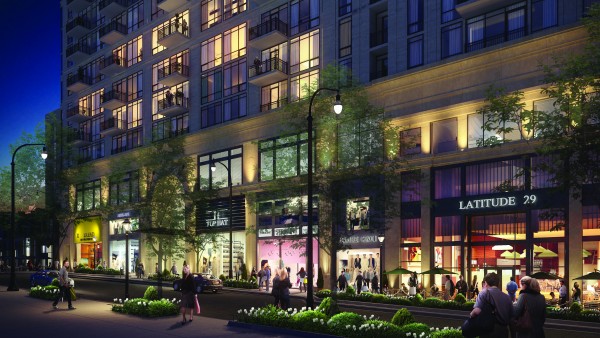 A rendering of the Buckhead Atlanta development includes retailers, restaurants, offices and residences.

Atlanta has long been known as a shopping mecca—from the high-fashion halls of Lenox Square and Phipps Plaza to the bespoke boutiques in the Virginia-Highland neighborhood, the latest trends are never far away. Adding to the scene later this summer, the city welcomes one of the most highly anticipated shopping and business districts in recent memory: Buckhead Atlanta. Spread over six city blocks, the 8-acre development comprises 300,000 square feet of upscale retail and restaurants, more than 100,000 square feet of luxury office space and nearly 400 high-rise apartments.

The $1 billion Buckhead district redevelopment project at Peachtree and East Paces Ferry roads, which started in 2007 as the Streets of Buckhead, stalled after the economic downturn before being picked up by OliverMcMillan, a renowned San Diego-based development firm. For its first project in the Southeast, OliverMcMillan has gone to great lengths to maintain the integrity of the historic neighborhood while also striving to give Atlanta a shopping experience it will not soon forget. “It’s an evolution of what Buckhead has been about,” says Jeff Zeigler, senior managing director of retail services at OliverMcMillan. “We want to return the streets, these wonderful boulevards, back to Atlanta.”

Visitors will stroll down tree-lined cobblestone paths at this open-air shopping destination filled with the high-end stores of French luxury retailer Hermès, cashmere purveyor Brunello Cucinelli and luxury Italian label Etro. While Etro can be found at upscale department stores like Saks Fifth Avenue and Nordstrom, this will be one of the company’s few stand-alone boutiques in the U.S.
Shoppers seeking a wide array of luxury labels in one store need look no further than Scoop NYC, which boasts clothing and accessories for men and women from designers such as Diane von Furstenberg, Jimmy Choo and Zac Posen. In addition to unique boutiques, shoppers will find a flagship store for shapewear brand Spanx, which also is moving its corporate headquarters to the development from another location in Buckhead. 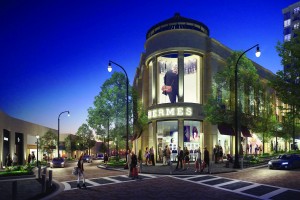 Hermès will anchor the new district in a 4,100-square-foot building at Buckhead Avenue and Bolling Way.

On the dining side, Atlanta’s burgeoning reputation as a food-focused city has made securing tenants an easy task for Buckhead Atlanta developers. Diners can look forward to everything from a French bistro to a gastropub, gourmet pizza and cupcakes at this new landmark. “We have a great deal of respect for the restaurant scene in and around Atlanta,” Zeigler says. “The commonality of all the restaurateurs that will be opening is that they all have a very local approach.”

The district also will be home to the first Georgia locations for several restaurants including upscale French bistro Le Bilboquet, which has been a hot spot for more than 25 years near New York City’s Central Park; Lugo Caffe, an Italian eatery in New York and Atlantic City, offering homemade pastas and its own lines of Chianti, prosecco and pinot grigio; Doraku, a sushi restaurant established by Kevin Aoki, son of Benihana’s founder; and Shake Shack, a burger, hot dog and frozen custard stand from acclaimed New York City restaurateur Danny Meyer. Diners also may satisfy their sweet tooth at Georgetown Cupcake, which some may recognize as the bakery featured on TLC’s “DC Cupcakes” television show.

Zeigler says the firm has aimed to bring exclusive shops and eateries that can’t be found anywhere else. “The focus, the heart and soul, will be the retail, and food and beverage,” he says. “Our mantra has been to make sure we … [bring] new uses, new tenants to the marketplace [without] replicating things that were already [in Atlanta].”

In addition to this curated collection of shopping opportunities and haute cuisine, an enviable list of amenities and bespoke touches sets the Buckhead Atlanta development apart from some of the city’s other shopping venues. A 22,000-square-foot roof garden for tower residents includes a pool, formal garden, entertaining areas and fountain. Other amenities include valet parking and a full-service concierge.

Notably, guests and residents of The St. Regis Atlanta have a special advantage, given the development’s close proximity to the resort. “Buckhead Atlanta will offer guests [a] place to encounter, stroll and enjoy a beautiful part of our city without visiting an obvious tourist destination or shopping mall,” says concierge Louis Wood. “The unique street-scene dynamic will be a great addition to the Buckhead neighborhood, with pedestrian-friendly streets and boulevards.”

History in the Making

The shopping district’s grand opening this fall culminates seven years of planning, with plenty of trials and tribulations along the way. In 2007, developer Ben Carter broke ground on the project originally envisioned as the “Rodeo Drive of the South.” He viewed Buckhead as an ideal location for high-end retailers considering it’s one of the wealthiest communities in Atlanta and the nation—in fact, the district was ranked as the second wealthiest ZIP code east of California and south of Virginia (behind Palm Beach, Fla.), according to a 2011 study for Bloomberg Businessweek magazine.

After building began, however, Atlanta—like much of the U.S.—experienced a decline in the construction industry that accompanied the Great Recession. In 2012, when the economy had recovered enough for construction to resume, the project found a new home with developer OliverMcMillan. “The first thing we look for is great cities across the United States,” Zeigler says. “… We want to focus in on great cities like Atlanta, Houston, New York, San Francisco. We saw this as a once-in-a-lifetime opportunity to do something great.” 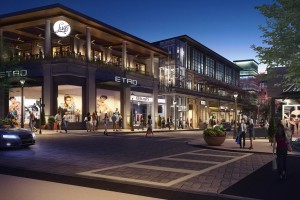 OliverMcMillan’s commitment to the project soon caught the attention of local leaders. Atlanta Mayor Kasim Reed and his administration threw their support behind the development from the beginning. “The mayor has been a huge proponent from day one,” Zeigler says. “From the smallest of tasks to the largest of chores that needed to get done, we’ve really felt the city has been side by side with us every step of the way.”

Because of OliverMcMillan’s strong reputation in the industry, the relationship between the developer and the city blossomed. “They’re really good at what they do,” says Brian McGowan, chief operating officer of the Metro Atlanta Chamber and former CEO of Invest Atlanta, the city’s economic development arm. “They’re good at taking difficult sites—sites that, for one reason or another, have some financial issues or market issues—and turning them around.”

Coming from California, McGowan had seen firsthand the success that OliverMcMillan had there, so, not long after accepting the position at Invest Atlanta, he began working to connect the developer and the city. “We set up some meetings with the mayor and got him excited about the project, and that was two and a half years ago when we were seeing a shift in the Atlanta economy,” McGowan says. “The mayor explained that to Dene [Oliver, CEO of OliverMcMillan], and Dene was sold and refocused the project and got the cranes moving.”

The cranes have been moving ever since to the tune of 3,700 direct, indirect and induced jobs in construction alone, with a total economic output of construction standing at $500 million, according to McGowan. In addition to local taxes paid on the project, area companies were tapped to provide products and services from concrete to design, and area restaurants often hosted construction crews, allowing the Buckhead Atlanta development to benefit the city even before the first tenant moves in. More than just a shopping experience, Zeigler notes that Buckhead Atlanta is also a redevelopment, which will benefit the city for years to come.

In order to make the project the best it could be, Zeigler says the company set a goal to weave the development seamlessly into the existing neighborhood. “Because Atlanta is the gateway city to the Southeast, it was important for us to remain conscientious of the neighborhood residents,” he says. Drawing inspiration from the architecture and influence of cities all across the world—think London, Paris, Milan—OliverMcMillan sought out designers and architects to create a unique atmosphere. World-renowned architectural firms Gensler; Smallwood, Reynolds, Stewart, Stewart; and Pappageorge/Haymes joined forces with Chicago landscape architecture firm Hoerr Schaudt. “I am excited about the varying architectural styles,” Zeigler says. “It doesn’t read as one type of development because you have historic and modern together.”

Unlike many developments, Zeigler notes that Buckhead Atlanta will open with mature trees and landscaping already in place. In January, Oliver estimated his firm had made a $10 million investment in the streets, sidewalks (including granite curbs) and landscaping alone. “It’s an ode to the pedestrian,” Zeigler says of the cobblestone streets lined by trees to shade shoppers from the sun.

Because of the extensive work that has gone into making Buckhead Atlanta a premier destination, the development is sure to be a boon for the city’s economy, with a strong draw for locals and visitors alike. “New development keeps the destination fresh and exciting for our visitors,” explains Mark Vaughan, executive vice president and chief sales officer of the Atlanta Convention & Visitors Bureau. “The new Buckhead Atlanta development will further cement the city’s position as the Southeast’s capital for shopping, dining and entertainment.” 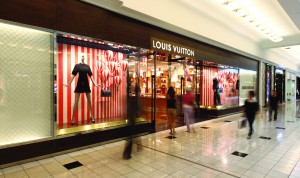 In addition to its location at Lenox Square, Louis Vuitton will open a boutique at Buckhead Atlanta.

Vaughan notes that planners always look at overall appeal when considering a destination for a conference or convention. “Buckhead Atlanta enhances our retail portfolio with luxury brands and also brings fresh dining concepts to the city, increasing Atlanta’s appeal to prospective customers,” he says. “This new development will truly be a destination in itself for our visitors, offering global and local brands that shoppers can’t find anywhere else in the Southeast.”

The opening of the Buckhead Atlanta development is more than just another feather in Atlanta’s cap as the economic center of the Southeast. It is the culmination of years of planning and collaboration between the developer, the city and its residents. From its cobblestone streets and a uniquely cosmopolitan vibe to its cultivated list of retailers, dining establishments and amenities, Buckhead Atlanta is sure to be the crowning jewel of the neighborhood.