Renowned designers and equally well-known vineyards come together with creative collaborations that quench the palates of oenophiles and tastemakers alike.

It isn’t unusual to hear of a fashion label partnering with another retail outlet for their designs, but the latest trend has designers putting their aesthetics to use on a more literal palate through new winemaking ventures.

Fashion designer Derek Lam says the similarities between creating wine and creating a collection make the partnership a unique fit. “Inspiration comes first, then finding a balance to create something special and interesting, arriving at something which becomes desirable,” he explains.

The designer, whose work graces the pages of Vogue, grew up in San Francisco, just a little more than an hour from Northern California wine country and Yountville’s Cliff Lede Vineyards. When Lam was approached with the opportunity to not only learn about the winemaking process but also help craft and design his own wine label, he jumped at the chance.

Choosing Lam for the inaugural partnership was an easy choice for Cliff Lede, the vineyard’s proprietor. “After getting to know [Lam], and learning that he is originally from the Bay Area and has a passion for food and wine, a collaboration marrying both design and fine wine seemed a natural fit,” he says.

The result of the Lede and Lam partnership is a cabernet sauvignon named Poetry by Derek Lam. This collaboration is the first in the vineyard’s yearly wine series, which will feature a partnership with an industry innovator to create a signature wine of fewer than 50 cases. “Future releases could bring a Poetry [wine] by an Internet mogul, a performance artist or a rock star,” Lede says.

No detail was spared in the Lede/Lam collaboration; Lam infused his design sense in every area of the wine process, including the label and bottle design. Inspired by a masculine apothecary theme, the bottle is wrapped with black tissue paper, a black grosgrain ribbon and finished with a black wax seal. The designer was also active in the actual winemaking process and says wine has always been an interest.

Lam’s collaboration with Cliff Lede Vineyards isn’t the first instance of a designer stepping into the world of wine. In 2007, Italian designer Roberto Cavalli worked with his son to produce his debut wine, the Degli Dei Toscana IGT Cavalli Selection 2004, which was highly praised by critics.

Also in Italy, Salvatore Ferragamo’s family estate, Il Borro winery, blends merlot, cabernet sauvignon, chardonnay and syrah, among other varietals. Under the leadership of Ferragamo’s grandson, the winery produces 12,500 cases per year with the same craftsmanship that the designer was known for.

Lam explains that the marriage of winemaking and fashion design is simple: “While dressing is very different from enjoying a bottle of wine, the desire to enjoy each is similar: captured moments, which define pleasure, an enhancement of the essence of life.”

Sip a glass of premium wine from one of fashion’s great designers.

2009 Cavalli Tenuta Degli Dei Toscana
After becoming familiar with the spirits industry through his private-label vodka in 2005, Roberto Cavalli decided to make his move into wine. Using grapes from his estate in Tuscany, the designer—along with his son Tomasso, who runs the vineyard—began producing Cavalli Tenuta Degli Dei Toscana. Located in the village of San Leolino, near Panzano in Chianti, the vineyard is rich with the marl-based soil known as galestro and is well drained, allowing the vines to absorb all the minerals in the soil and soak up the terroir of the area. Cavalli’s winemakers, Gioia Cresti and Carlo Ferrini (Wine Enthusiast’s 2007 winemaker of the year) use French origin grapes from the vineyard, including merlot, cabernet sauvignon, cabernet franc, petit verdot and alicante bouschet. The winemakers use hand-harvesting techniques and select their grapes by hand, allowing the wine to mature more than 18 months in French oak barrels, and then for another year in the bottle. The result is a wine of great depth, featuring initial notes of blackberries and prunes that give way to accents of tobacco, spice and cinnamon.

2009 Il Borro Polissena Toscana Rosso IGT
Located in Tuscany at the foot of the Pratomagno Mountains, Salvatore Ferragamo’s family winery brings the patriarch’s design vision to the vineyards with the help of renowned Italian winemaker Stefano Chioccioli. Because the region is known for its great sangiovese-based wines, it’s natural that one of the stateside favorites is a 2009 Polissena Toscana IGT Rosso. Produced in the highest vineyard in the Il Borro winery approximately 1,150 feet above sea level, the Polissena was awarded 92 points by Wine Spectator critic James Suckling, placing it firmly in the must-purchase category. The 100-percent sangiovese is a balanced varietal, offering high acidity integrated with light oak. Ideal for pairing with white or red roasted meats or tomato-based pasta dishes, it has light aromatics of dust and tea leaves, with rustic tones and notes of tart cherry and strawberry. 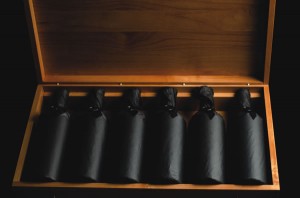