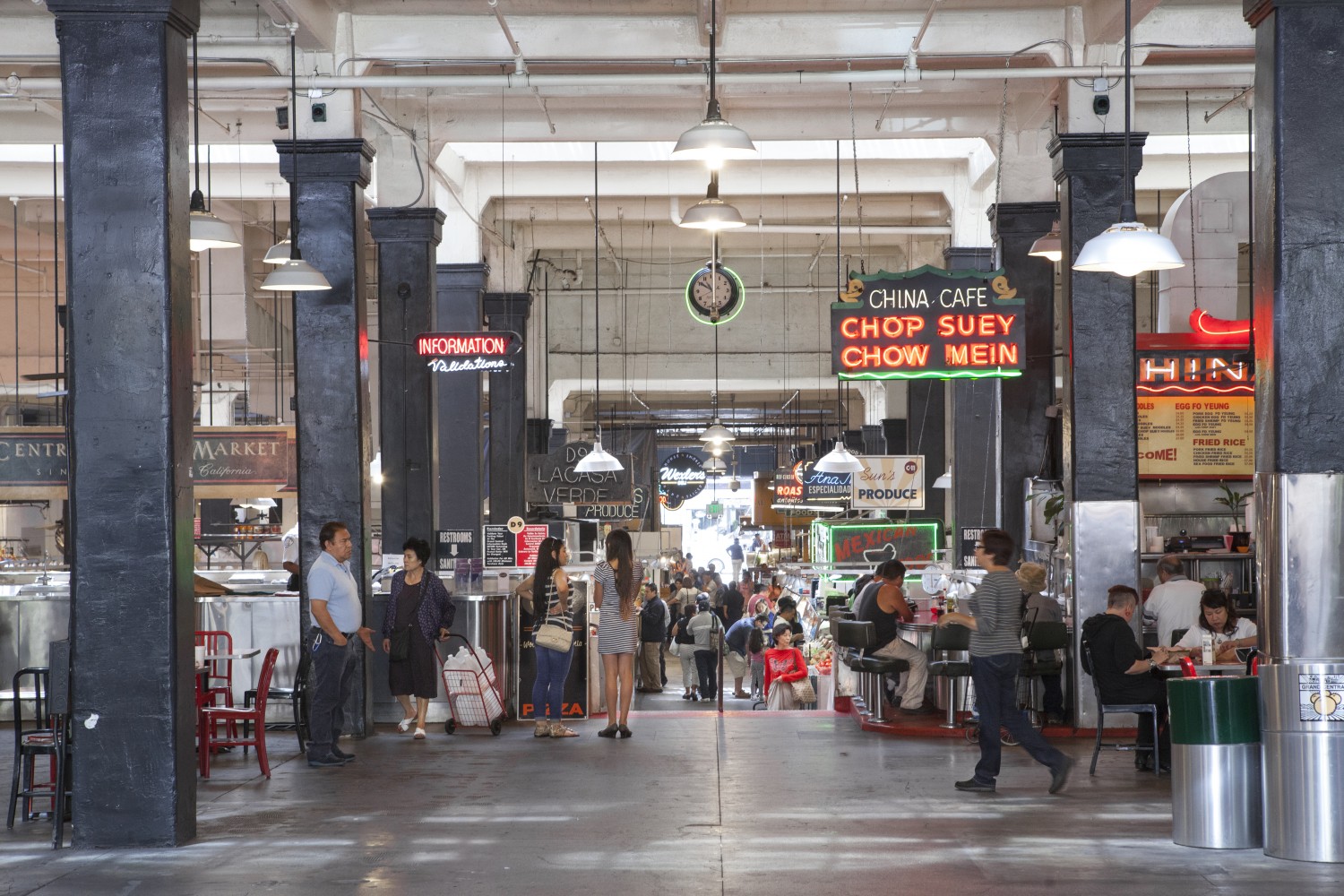 Downtown Los Angeles has always been the nucleus for the city’s historical foundation and diverse cultural heritage. The artistic, multivenued Performing Arts Center of Los Angeles County—also known as The Music Center—presents award-winning plays, musicals, concerts and operas year-round. The ethnic microcosms of Little Tokyo and Chinatown and the Latino-flavored neighborhood of El Pueblo offer both residents and visitors the finest in international cuisine. Meanwhile, the buildings in the Civic Center—such as City Hall, LA Law Library and the criminal and federal courthouses—loom over Broadway Avenue as though they were keepers of the city’s secrets.

And there’s also downtown’s historical district, home to the Grand Central Market (GCM), the largest and oldest public market in the city. Since 1917, the market has been home to a multitude of food vendors and merchants whose cultural roots have served as the lifeblood to the community. And, according to Kevin West, creative director for the market, the venue shows no signs of slowing down after maintaining its presence for nearly 100 years.

“GCM has been a landmark in downtown Los Angeles, and over the decades, the place has continually changed to reflect the changing face of the city,” West explains. “What’s the secret to that longevity? In one sense, it’s hard to say; what makes something a classic? But I think the common theme during the market’s best eras, including its 1920s peak and its current amazing resurgence, is great vendors who give the people what they want.”

Snapshot of the Past

The origins of the Grand Central Market date back to the late 19th century, when retired entrepreneur Homer Laughlin hired architect John B. Parkinson to construct his eponymous six-story building on South Broadway Avenue, the city’s first structure that was fireproofed and steel-reinforced. As time allowed for more space, architect Harrison Albright designed the building’s 1905 expansion to Hill Street. It was during this construction that it became the first to have a reinforced concrete foundation—somewhat of a harbinger to its forthcoming legacy.

Although the first tenant was the Ville de Paris department store, it was soon replaced by the Grand Central Market in 1917. Within the first decade of opening, the market grew to around 90 stalls occupied by fishmongers, delis and miscellaneous merchants. Along with the grocers that sold fresh fruits and vegetables—such as a dozen oranges for just 50 cents—there were eateries like Morgan Oyster Co. and Langford’s Ice Cream Parlor, where one could order a milkshake in exchange for a nickel.

At first, the market beckoned the wealthy residents who lived at the top of Bunker Hill in Victorian mansions, and eventually it became a gathering place for newly arrived immigrants from Germany, Italy and Russia. But what prompted the public’s accessibility to the market during these inaugural years was not only its proximity to the Angels Flight railway and its central downtown location, but also the surrounding landmarks. The various sites added to the overall experience by creating a destination for visitors to explore in addition to shop.

“In the early decades of the 20th century, Broadway [Avenue] was the spine of the city,” West says. “And the architecture … is some of the most beautiful and historically significant from that era—from the landmark Bradbury Building (seen in many films including ‘Blade Runner’ … and ‘The Artist’) to the Million Dollar Theatre, which was opened in 1918 by Sid Grauman as the first of the downtown movie ‘palaces.’ ”

Grand Central Market has consistently served the culinary needs of the Los Angeles community and, in doing so, has adapted quite well to a considerable number of renovations, most notably in 1984 when developer Ira Yellin purchased the market and adjacent properties. During the 1990s, Yellin hired architect Brenda Levin to restore the existing architecture of the central building and the market, and to also add residential units, thereby tapping into the property’s full potential as a living area, food emporium and tourist capital of Los Angeles.

Although the Grand Central Market’s longevity into the 21st century has been strong—especially with the influx of Latino and Asian vendors from the 1950s to 1980s, such as Roast To Go and Silva’s Fiesta Meats—it did face its biggest challenge when the 2008 recession crippled millions of small businesses across the country. The market was not immune to the financial upheaval as it lost a considerable percentage of its vendors.

Since Ira Yellin had passed away in 2002, his wife, Adele, was determined to keep the market alive through simple willpower, the dedication of her staff and the retailers who were willing and able to persist during the economic challenges as well as difficulties from outside competition. And as the demographic of the neighborhood shifted, she envisioned a modernized market—one intermixed with upscale spots to attract a new generation of clientele.

Among the batch of newcomers to the market is Sticky Rice, a Thai food place that opened in March 2013 with an apparent dedication to organic and locally sourced ingredients. Owner David Tewasart believes that being among the best in culturally diverse cuisine has been instrumental in his business’ success. “The exposure we get from how high-profile the market is has been immense,” Tewasart says. “For someone from out of town to say [that] they read about us in Food & Wine [magazine] and had to try Sticky Rice is really hard to describe.”

In addition to being honored with a 2014 Eater award, (So Hot Right Now) and being granted a place on Bon Appetit’s hot 10 restaurants list of 2014, Grand Central Market’s other new vendors have been recognized by various media outlets and industry experts. At Wexler’s Deli, which opened to great fanfare in February 2014, local chef Micah Wexler serves the finest in Jewish cuisine. Offerings not only include the trademark smoked fish on a bagel smeared with cream cheese, Wexler’s also uses premium kosher meats; the deli earned a No. 1 spot on LA Weekly’s roundup of the city’s best pastrami sandwiches in summer 2014.

Another standout is Belcampo Meat Co.—famous for the highest quality of organic meat, courtesy of the ethical and humane treatment of cattle and other livestock at the eatery’s ranch near Mount Shasta, Calif. Other favorites include Eggslut, whose egg-based dishes like the bacon, egg and cheese sandwich have attracted long lunch lines during the weekdays since opening in late 2013. And nearby is the Santa Barbara-based McConnell’s Fine Ice Cream parlor, where interesting flavors—such as dark coffee chip and crisp peppermint stick—are made fresh daily and shipped directly to the market.

While the new spots are crowd-pleasers, long-standing vendors are just as famed at the market. For instance, Las Morelianas, whose specialty is the delectable carnitas, continues to have a loyal following in the community and tempts palates with traditional tacos, burritos and tortas packed with the savory meat. For more Latin tastes, visitors have perused dried chilies, fresh moles and other spices at Valeria’s Latin grocery mall since its early days a few decades ago when it was called Bardovi & Kazan. Diners also have frequented China Cafe, which is well known for serving chop suey and wonton soup out of a neon-lit stall. The eatery set up shop in 1959 and continues to maintain the original convivial ambience of the market.

The variety of places to grab a bite is overflowing at the market, but the greatest appeal about the selections is the embracement of all nationalities. West recalls how he visited the market one day and the cultures represented—from Latin America to Asia to the Middle East to Europe—seemed to capture the essence of Los Angeles. “The crowd at Grand Central Market looked to me a lot like LA, and I would argue that GCM is the most socially and economically integrated public space in the city,” he says.

Peruse some of the vendors at Grand Central Market:

There is more to do at the Grand Central Market than eat, browse and socialize.

Every Thursday from 6-9 p.m., a weekly game night is held throughout the space, bringing more people from the Los Angeles community together to play a variety of entertaining activities, such as pingpong, cornhole, Jenga, Cards Against Humanity, Uno, Scrabble and strategic board games like Settlers of Catan.

According to Christophe Farber, director of business development at the market, the weekly entertainment event was created in July 2015 as part of a late-night initiative when the market started staying open until 9 p.m. on Thursdays through Saturdays.

“Game night is a part of the goal of having Grand Central Market serve as a community gathering place where people can come together for all kinds of food, cultural and social experiences,” he explains. “It’s been great to see how people have embraced game night—making it a regular spot for meet-ups and even bringing down their own games to invite others to play.”

The event has proven to be a success, resulting in the market’s ever-evolving reputation as the place to go in historic downtown Los Angeles.