Like the apple trees tapped for its production, hard cider has deep roots in the United States. In Colonial days it was the drink of choice—inexpensive, plentiful and praised for a variety of supposed health benefits, it even surpassed beer in popularity. But as orchards burned during Prohibition, the libation essentially disappeared.

Today America’s original favorite is back in demand. Market research company IBISWorld reports that the industry has grown nearly 30 percent during the past five years. Cideries are popping up in every corner of the country, while cider-focused bars, from The Northman in Chicago to Schilling Cider House in Seattle, are introducing drinkers to a full range of styles. With that growth has come diversity far beyond a standard sweet, spiked, carbonated apple juice; today’s market offers traditional English perry (made from pears), funky French farmhouse ciders, inventive American hybrids and many other options.

Artisanal cider makers, whose craft can include blending, wild fermentation and barrel-aging, distinguish their product from quickly made varieties with concentrates and added sugars. And while closer to winemaking in process, cider’s crossover appeal frequently reaches craft beer fans, who can typically find cider on tap at beer bars and on the shelves next to IPAs and pale ales.

We checked in with leaders of the hard cider resurgence in cities from coast to coast to learn what cider makers and drinkers are discovering on the edge of this flavorful frontier. 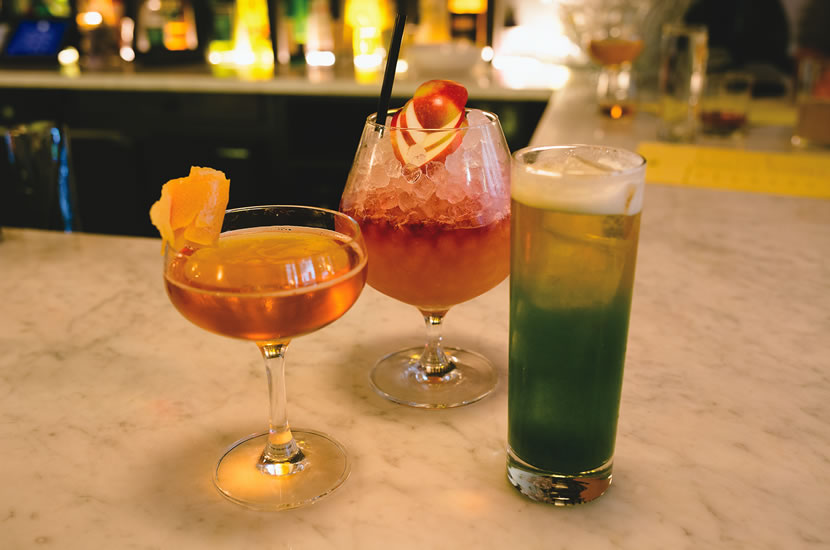 Wassail is at the forefront of the cider scene. (Photo by Noah Devereaux)

Cider in the Big Apple

For many cider connoisseurs, one of the most exciting aspects of the modern industry is that it’s still being defined. “There are no cider rules,” says Dan Pucci, cider director of Wassail, a cider-focused restaurant and bar in New York City. “We’re all kind of figuring out what makes sense to us. Everyone is taking a different approach to things, and we’re still not quite sure of where the future leads.”

Wassail itself is at the forefront of the cider scene in the Big Apple. Jennifer Lim and husband Ben Sandler, also the team behind New York’s The Queens Kickshaw, opened the Lower East Side establishment in 2015 to fanfare as New York City’s first cider bar. Its menu, which features a dizzying number of domestic and international ciders, is divided by region, with bottles and drafts from traditional cider-making countries such as England, France, Spain and beyond, and a number of American producers, from Oregon’s E.Z. Orchards to New Hampshire’s Farnum Hill.

For Pucci, one of the most exciting American cider-making regions lies in-state, in the Finger Lakes region, home to producers like Redbyrd Orchard Cider and Black Diamond Cider.

“All of our Finger Lakes producers are amazing,” Pucci says. “They’re really pushing the boundaries of style and techniques. They’re going for this really high-acid, fruit-driven style of cider, and nowhere else in the country do they have such a unified style of cider.”

“People are expected to have a certain level of knowledge when ordering wine at a restaurant,” he explains. “With cider, people don’t know anything about it, and that’s the point, that’s why you’re here. So people are totally open to us, and it’s totally open to whatever you want. There’s no baggage.” 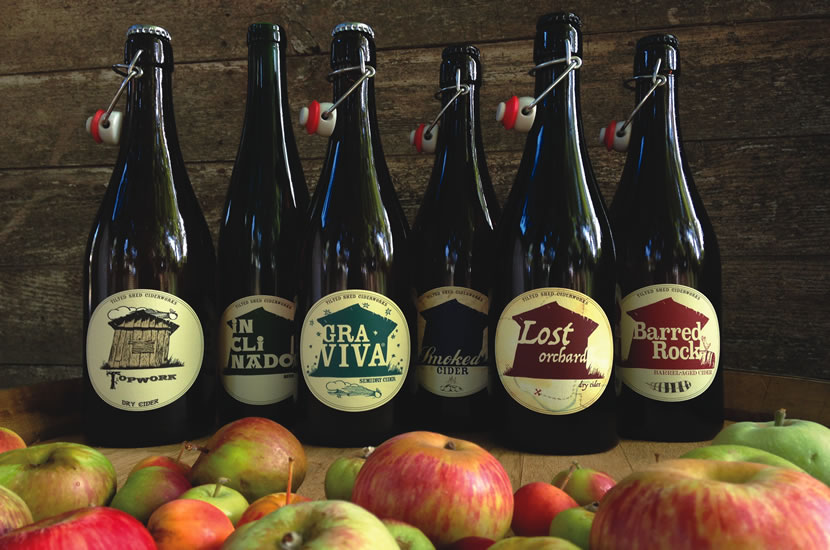 On the opposite side of the country, Southern California may not initially come to mind when thinking of the nation’s apple-producing regions, but in some areas of counties like Ventura, Los Angeles and San Diego, the moisture coming in off the ocean and the cool nights make for a more conducive climate for growing the fruit.

The movement toward taking advantage of local produce has also influenced many cider-makers. Los Angeles County’s 101 Cider House has tapped into the local market, crafting ciders from herbs, apples and other produce grown around the famous Highway 101.

Founder Mark McTavish, who also owns cider import and distribution company Half Pint Ciders, grew up in the apple-growing area of Ontario, Canada, and entered the craft beer scene early on in his career. With a background in the health and fitness industry, his mission to make “the world’s healthiest alcohol” led to producing a line of natural ciders at 101 Cider House. Yet the term “natural ciders” is another aspect of the industry that’s still being defined, McTavish says.

“I think there’s a lot of confusion about that term, even among the cider-makers themselves,” McTavish says. He says he defines natural cider as “100-percent fresh-pressed juice, left to ferment spontaneously on its own with its own native yeast. We don’t filter, and we take it straight to the bottle. It may go through secondary fermentation in [the] bottle, but other than that we don’t add any back-sweetening, syrups or concentrates. We don’t pasteurize, and we don’t use sulfites.”

That doesn’t mean the 101 line of ciders is simple or lacking a depth of flavor. The India Pale Cider is dry-hopped with tropical, bright Citra hops, while Cactus Red is made with native California cactus pears. Piña Menta features fresh-cut pineapple for a subtle, more authentic fruit taste than other pineapple ciders made with concentrates, McTavish says. And Black Dog, an especially unique variety, is made with activated charcoal derived from coconuts and Ventura County lemons—the company claims it’s the world’s first black cider. 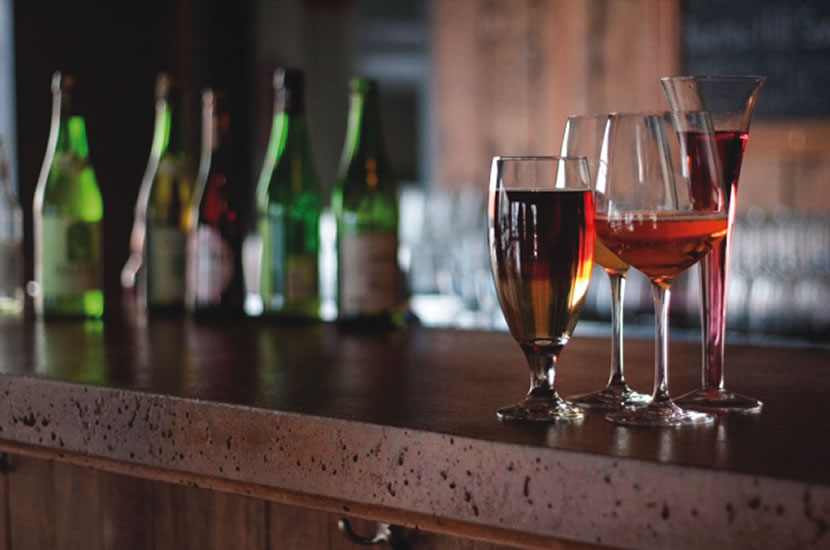 Further north on the 101, the San Francisco Bay Area is defining its own cider culture. The cider house and gastropub Upcider opened in 2012 and serves American and imported ciders in San Francisco’s upscale Nob Hill neighborhood, while cider-tasting festival Cider Summit SF has taken place annually at the Presidio park for the last three years. Farther north of the city in Sonoma County, Scott Heath and Ellen Cavalli at Tilted Shed Ciderworks have made a name for their dry, complex concoctions.

“Tilted Shed is in a class of their own,” say Mike Reis, operations manager at Lime Ventures, which distributes Tilted Shed in California. “Their approach to cider is all about starting with good fruit as the main step toward making good cider. They often say all it takes to make good cider is apples and time, which is really different from a lot of other California producers.”

Reis, who also oversees the cider category for the annual Good Food Awards, emphasizes the difference between fruit-focused makers like Tilted Shed and concentrate-based producers. “There’s a lot of potential with cider to express interesting variety characteristics, especially with apple varieties that aren’t really grown anymore,” Reis says. “At the same time, there’s a movement within the industry, and it feels like a race to the bottom. There are a lot of producers who are slapping ‘craft’ on their bottles or cans, but they’re just buying bulk juice or buying concentrate and fermenting it as quickly as possible with ale yeast.”

Although traditional in process, Tilted Shed’s ciders can be equally complex and creative, Reis says. Their Graviva! Semidry Cider is made with 50 percent Gravenstein, an heirloom apple from Sonoma County, and a blend of French bittersweets and other tannin-rich apples. Reis says it’s a crowd-pleaser. “I like to use it to introduce people to the realm of better cider,” he explains. “It’s really approachable, but complex and satisfying.”

They’ve also produced smoked ciders, made with a portion of wood-smoked apples, and gin and rye whiskey barrel-aged ciders. Yet it’s their Lost Orchard cider, made with apples from lost cider orchards in Sonoma County, that seems to capture their unofficial motto best—it just takes apples and time.