From luxury leather goods to high fashion, the House of Gucci stays ahead of the game by constantly re-inventing itself. 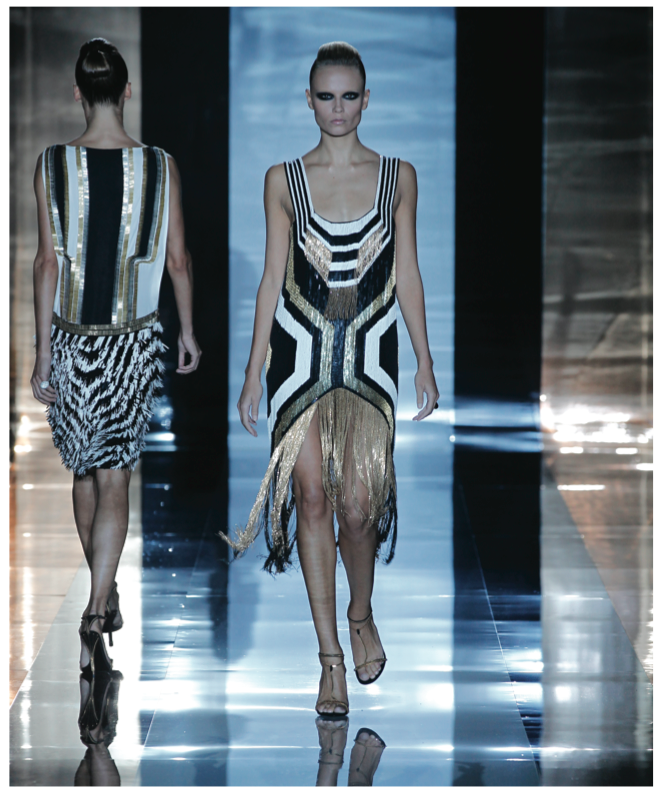 You know the famous emblems when you see them—the double “G” and red and green stripes are iconic symbols of the House of Gucci (better known simply as Gucci).

“This distinguishes who Gucci is and who is wearing the designs or carrying the bags,” says Robin Sackin, chair of fashion marketing management at the Fashion Institute of Technology in New York.

The story of Gucci includes family, drama, innovation, a refined aesthetic, openness to change combined with reverence for the past and a remarkable cast of characters. From the initial ideas of Guccio Gucci, who started a leather goods company and small luggage store in his native Florence 91 years ago, to the game-changing vision of Tom Ford, to the romantic sensibility of Gucci’s current creative director Frida Giannini—Gucci represents elegance and luxury that’s meant to be enjoyed. 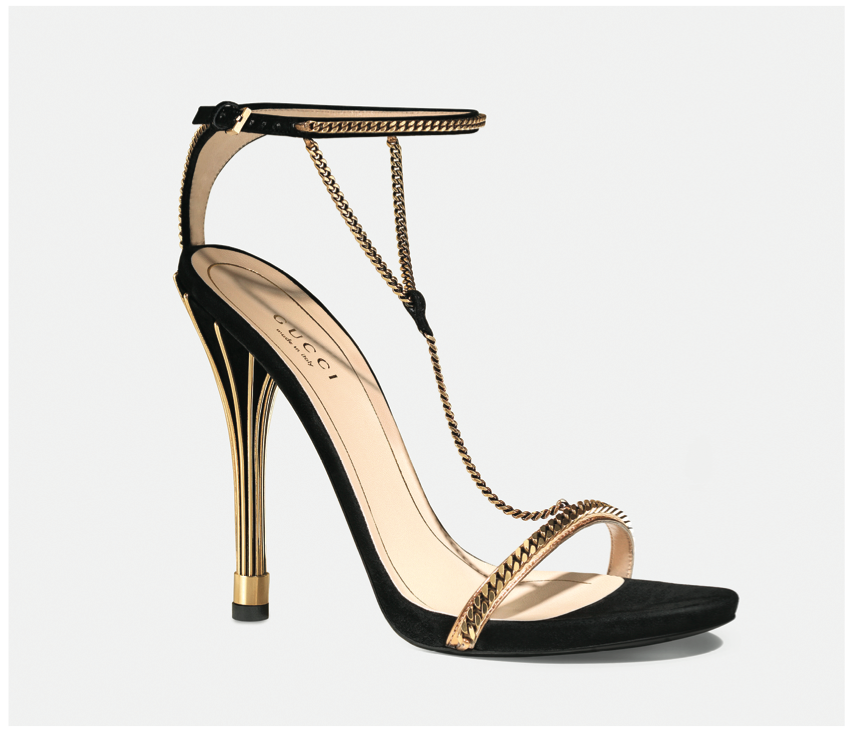 An Icon is Born

Guccio Gucci returned to Italy after spending time working at the Savoy Hotel in London, where he carefully observed the style and refinement of English nobility. He sought to combine their sensibility with the master craftsmanship of Tuscan artisans. He opened a store in Florence in 1921.

Italy’s fascist dictatorship threatened to derail the growing company when the League of Nations placed an embargo against Italy. Gucci sought alternatives to imported leather and explored atypical luxury materials, which included hemp, linen and jute.

An innovative creation by one of the company’s artisans, a burnishing cane, served as the handle of the first Bamboo bag, which has remained a Gucci staple with updated designs. The latest presentation, the New Bamboo, was first shown on the runway for spring/summer 2010 and currently has several unique variations. 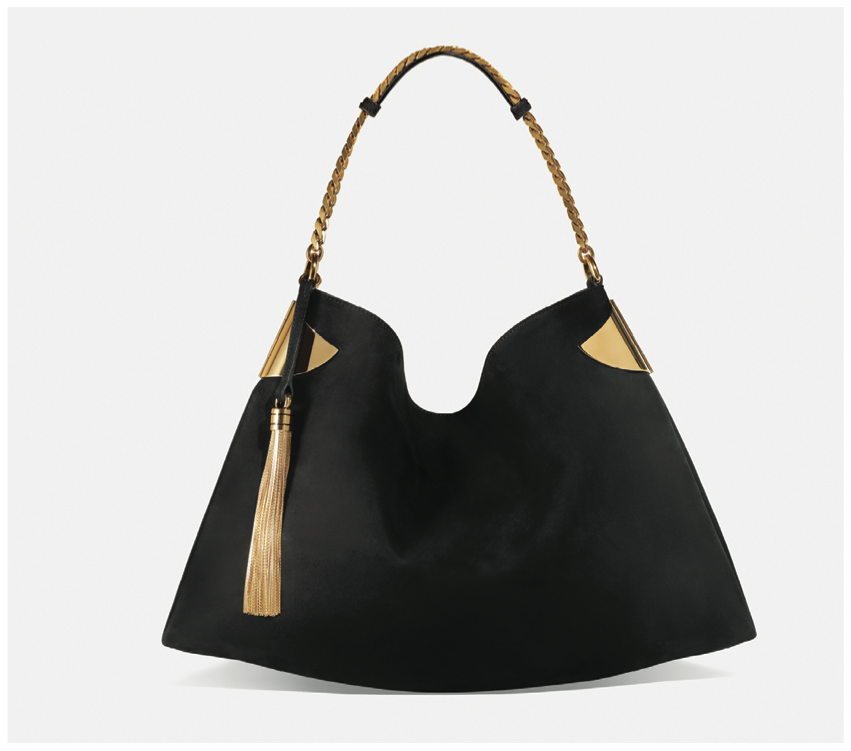 Post World War II, the production of leather goods resumed and the company kept moving forward. One of Gucci’s sons, Aldo Gucci, introduced pigskin, which became a signature material for the company. Another son, Rodolfo Gucci, opened a Gucci store in Milan. A store had opened in Rome in the late ’30s.

Colleen Hill, the assistant curator of accessories at the Museum of the Fashion Institute of Technology, cites the introduction of the Bamboo bag and the opening of the first New York store as historically significant, regarding the American presence a considerable expansion to Gucci’s international appeal. 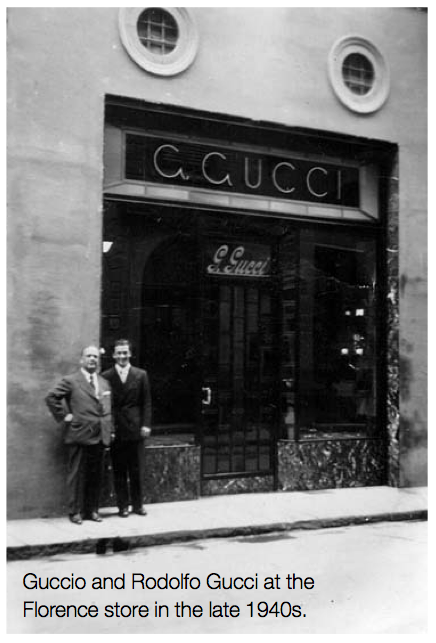 The New York Gucci store moved to a Fifth Avenue address in 1960, next to The St. Regis New York. The following year, stores emerged in London and Palm Beach. First Lady Jacqueline Kennedy carried a Gucci bag in 1961. That bag was then renamed the Jackie, a bag that continues to be re- envisioned and made five decades later. Giannini debuted the New Jackie on the spring/summer 2009 Gucci runway. The double “G” logo debuted in 1964.

The ’70s were a time of many firsts: first store in Tokyo, first clothing store and first fragrance. Celebrities became increasingly aware of Gucci and the purses became must-have accessories. In 1981, Gucci staged its first runway show in Florence.

“In the ’70s, Gucci became the brand that the Studio 54 clan started to wear,” Sackin says, referring to the famous New York disco that redefined nightlife. “It was the brand to be seen in. The designs were unique and contemporary and youthful. The fabrics were wonderful, too, and people started to think of the name as the one to wear.”

Gladys Perint Palmer (gladysperintpalmer.com), executive director of fashion at the Academy of Art University in San Francisco, says, “In the ’70s and ’80s, Gucci was about shoes, bags and blue-enameled alphabet pendant letters.” The logos became “badges of honor.”

The close of the ’80s brought a greater emphasis on fashion, particularly in 1989 when Dawn Mello, then-president of Bergdorf Goodman, was brought in to revitalize the brand. The following year, she hired young American designer Tom Ford to oversee ready-to-wear. 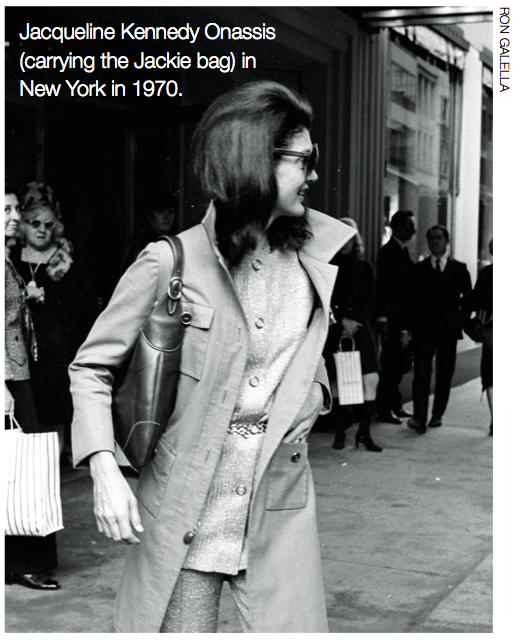 “Tom Ford brought Gucci into the high fashion world,” says Jean L. Druesedow, director of the Kent State University Museum, which possesses an important collection of fashion and decorative arts. “He took a company with a classic design sensibility and made it a luxury fashion house.”

In 1994, Ford became the creative director of Gucci, and his first collection (fall 1995) was well received. With designs that were overtly sexy to the point of daring, people took notice.

“Suddenly everyone had to be at the Gucci shows and be dressed in Gucci,” Palmer says.

“Tom Ford reinvigorated the brand, largely through his focus on the sexy, chic style that had made Gucci an essential luxury brand in the 1960s and 1970s,” Hill says. “Ford accessed the Gucci archives for inspiration, but also infused past looks with his own contemporary sense of style. 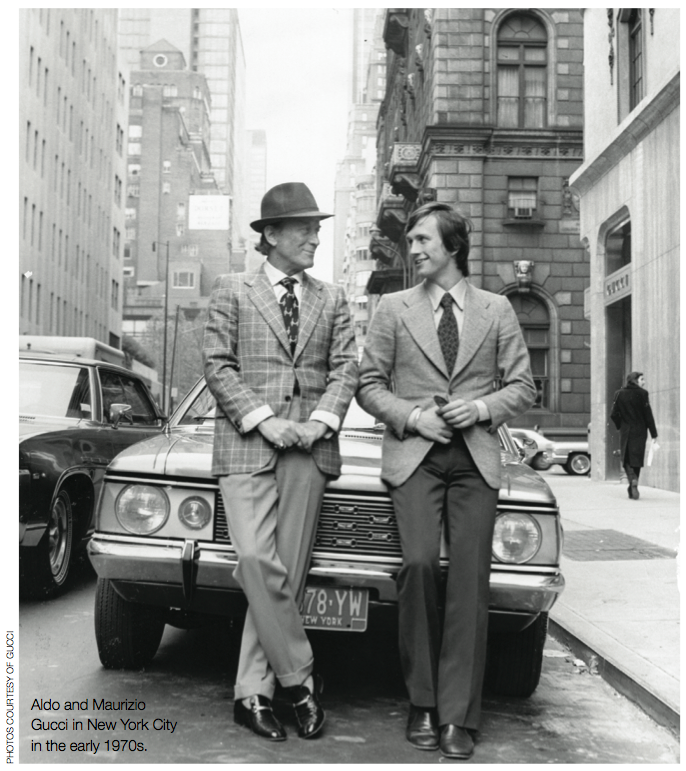 “He was also very successful at marketing the brand—through the use of the Gucci logo,” she adds. “His impact was huge. Ford played a major role in re-establishing Gucci as one of the hottest labels in fashion, and his designs were incredibly important to the fashion world as a whole.”

As Palmer notes, scandals were also a part of Gucci history, including family quarrels and bad business decisions: In 1995, Maurizio Gucci, son of Rodolfo, was killed by a hit man. His ex-wife, Patrizia Reggiani, was convicted in 1998 for being a conspirator and sentenced to 29 years in prison (subsequently reduced to 26). Last October, she declined parole from a Milan prison, saying she preferred to stay behind bars rather than go out in the world and have to find a job.

But the headline-grabbing stories in no way diminished Ford’s blazing success; his collection of white jersey dresses with sexy cutouts, fastened with abstract horse-bit belts, made Gucci the epitome of late ’90s glamour. Celebrities clamored for Gucci creations. Ford’s imprint was felt on men’s fashion as well. “Everyone had to have Gucci loafers. It was the hottest thing,” Kotsiopoulos says. “He set the bar.” 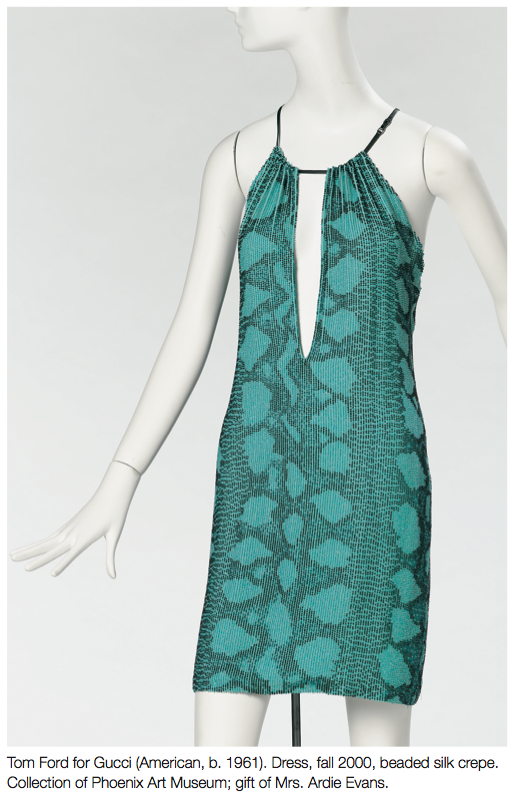 “In the ’90s and early 2000s, Tom Ford gave it this overt sexual vibe,” Kotsiopoulos says. “When Frida Giannini came in, she put a more feminine slant on all of that. It was still sexy, but a more romantic sexy. A female designer can empower a woman.”

Designer and fashion commentator Nick Verreos, who has his own line, Nikolaki (nikolakidesign. com), says he’s been a Gucci lover since hearing the Sister Sledge song “He’s the Greatest Dancer,” which has the line, “Halston, Gucci, Fiorucci … that man is dressed to kill.” Raised in Venezuela, he’d spend summers with an aunt in South Florida. When he was 12, she took him into a Gucci store for the first time, and it was love at first sight.

“When you think of Gucci, it’s still writing its history,” says Verreos, who appeared on season two of “Project Runway.” “It had a fabulous early history, but it was just for leather goods, equestrian wear, silk scarves—all fabulous.”

Verreos credits Ford with making Gucci a fashion house, which Giannini has carried on with her own vision. He says Giannini’s menswear makes him think of pop aristocrats. “It’s classic with a casual edge,” he notes.

“In contrast, the Gucci woman is understated sexiness,” he says. “I think of her as very elegant, very now. She’s like the Bond girl for the 21st century.” 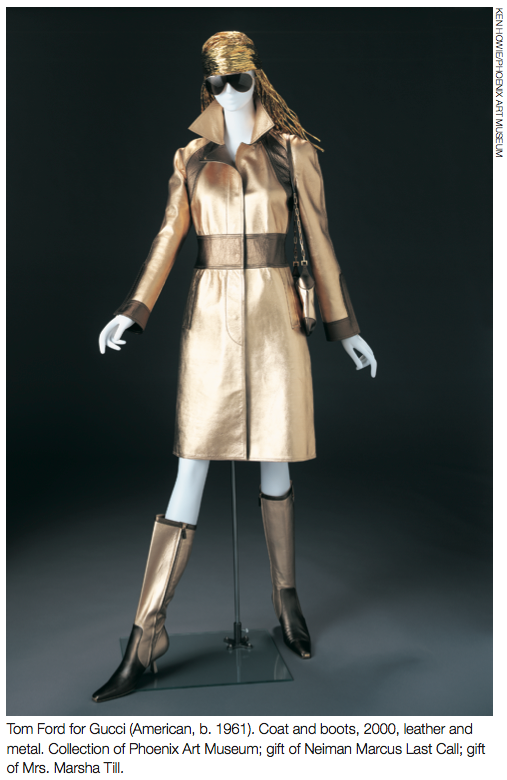 “The Gucci name is synonymous with a luxurious, chic and sexy aesthetic,” Hill says. “While Gucci’s clothing and accessories fit well into the contemporary fashion world, elements of the brand’s past styles are frequently infused into current designs.

“Each seasonal collection is unique, but there is always an underlying element of glamour that is distinctly Gucci.”

In 2010, Giannini amped up the glamour quotient with the introduction of Gucci Premiere. This one- of-a-kind line is not being shown on runways and is strictly for top VIP clients. Each season, there are a maximum of 15 pieces. Two-time Academy Award winner Hilary Swank wore a Gucci Premiere dress to the 2011 Oscars. Gucci continues to turn the tide of today’s fashion. 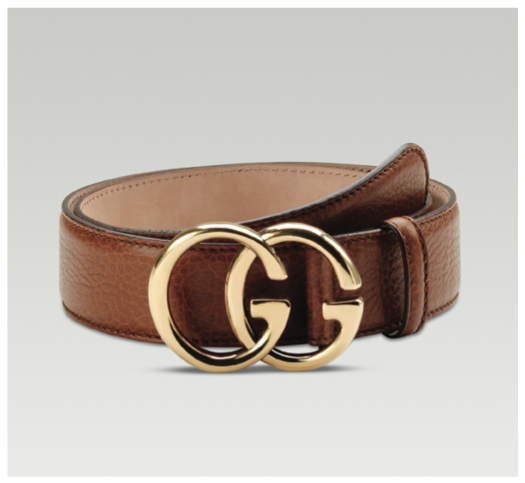 “Very brilliant of Frida Giannini to spearhead that,” Kotsiopoulos says.

For those interested in a historical look at the company, Giannini conceived of a Gucci Museum, which opened in the heart of Florence in September 2011 as part of Gucci’s 90th anniversary celebrations. Fashion and history, coming together, who knew?

“The museum invites the public to discover the history of the House, in a living space capturing its ‘Forever Now’ philosophy,” according to Gucci.com.

While you may not need a couture gown, there are Gucci items everyone can enjoy. Verreos says Gucci loafers and belts are must-haves for men. 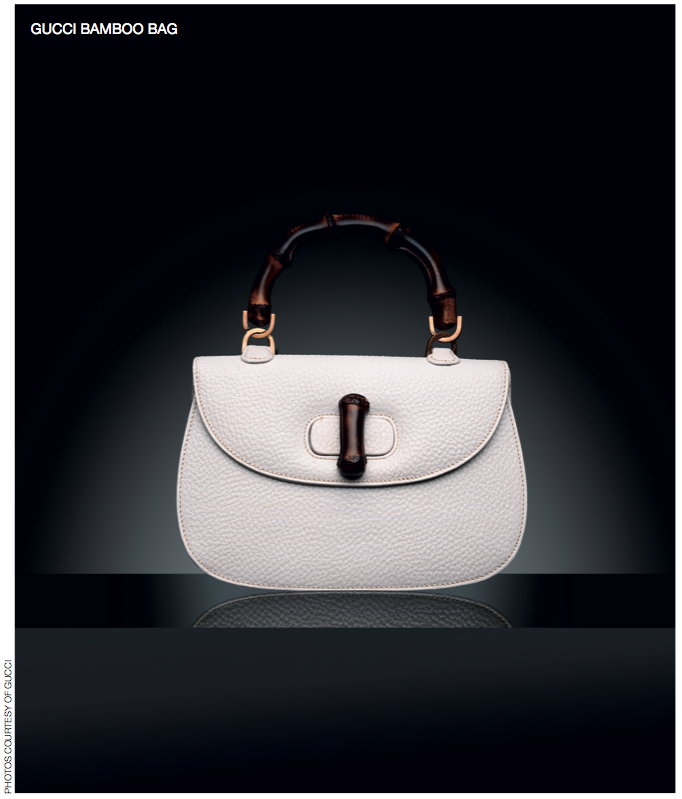 “When it comes to accessories, it’s Gucci, Gucci, Gucci,” he says. “I’m also a big ascot fan, so I’ve collected some Gucci scarves.

“For women, the purses,” he continues, mentioning the Bamboo and the Jackie and their classic style. “I have a Gucci duffle I can’t live without. I’ve had it for years. It stands the test of time.”

Kotsiopoulos praises the same purses. For men, he says, the tuxedos are amazing for someone attending a formal occasion. “They have something foreveryone,”hesays.“Youcangetaconservativetie and you can get a narrow tie. Definitely sunglasses. I think Gucci sunglasses are really amazing.”

Ninety-one years after the first store opened, Gucci remains a name that many people think of for luxury leather goods. In the 21st century, it is also a staple in the fashion world—with some of the most glamorous celebrities wearing Gucci. The celebration of its history combined with its forward- looking artistic vision make it a renowned name that will head into its second century at the forefront of style and luxury. 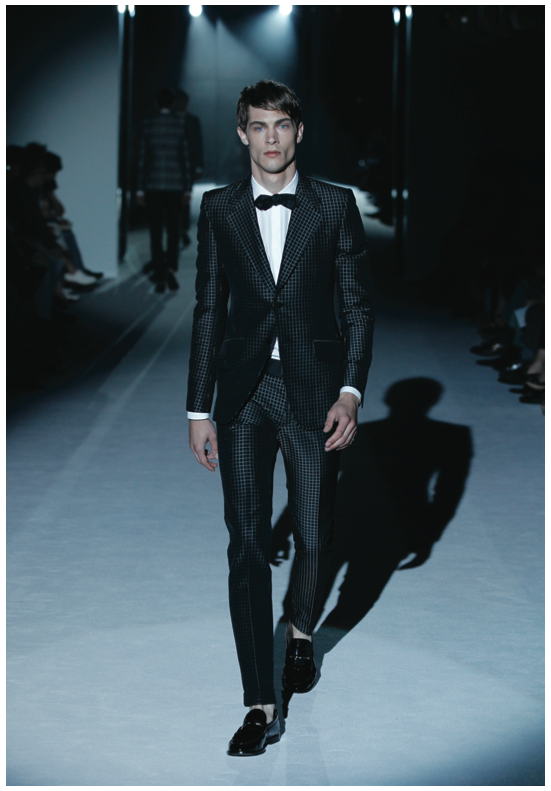