Kauai on the Big Screen

With its diverse, natural terrain and scenic beauty, it’s no wonder why Hollywood’s major film production companies are getting starry-eyed over Kauai.
By Jon Letman 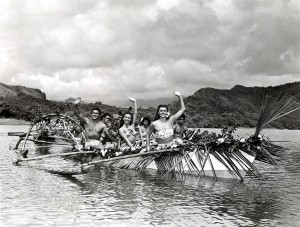 It might happen unexpectedly while crossing the Wailua River at sunrise or late one dusty afternoon in Hanapepe—when suddenly deja vu hits you. That feeling of familiarity, even a sense of nostalgia for a tropical island far from home, has struck many visitors who probably have never been to Kauai before—but most likely have seen one of the scores of movies that have been made on the Garden Island over the last 80 years.

Ever since the shooting of “White Heat” (1934), Hollywood has had an ongoing long-distance love affair with the Kauai, a relationship that has only grown stronger over the decades. Early films like “Pagan Love Song” (1950), “Voodoo Island” (1957) and “She Gods of Shark Reef” (1958) are largely forgotten today, but other silver screen classics like “South Pacific” (1958) and “Blue Hawaii” (1961) redefined the way Hollywood viewed Kauai and how moviegoers on the mainland saw the islands.From adventure (“Raiders of the Lost Ark”) and action (“Man With The Golden Gun”) to the absurd (“Girls! Girls! Girls!”), Kauai has served not just as a backdrop but also as an integral part of the story in countless feature films.

Whether it’s your first time to Kauai or you’ve been here too many times to count, it doesn’t take long to see how this tiny island in the middle of the Pacific has become one of the world’s premier movie locations.Angela Tillson, a local film locations manager and production coordinator, has been helping connect filmmakers with Kauai’s most amazing places since 1989. Over the years she has worked on about two-dozen major films, helping directors and producers find just the right place to shoot their film.

“Just drive around, you’ll see why Kauai is so popular—it’s absolutely gorgeous here,” Tillson says. “We have 11 different climate zones all in close proximity to one another.” For a filmmaker looking to shoot scenes in a desert, rainforest, high cliffs, rainy bogs or grassy hillsides, all can be found in less than an hour’s drive. Consider that the whole of Kauai is only slightly larger than the city of Los Angeles and you can appreciate Kauai’s appeal for busy filmmakers.

Beyond being a gorgeous tropical island with a highly varied landscape, American movie makers appreciate being able to work domestically, even when creating a scene meant to take place in the wilds of southeast Asia, the far-flung islands of the south Pacific or a remote African village. For filmmakers shooting on Kauai, it means being able to work in U.S. currency, operate under U.S. laws and regulations and not having to worry about local sanitation conditions, exotic tropical diseases, security and political instability. Making movies on Kauai is closer, cheaper and easier than attempting the same shoot on the other side of the world.

Kauai may feel far from New York or Chicago, but it’s still only six hours’ flight from the West Coast, where most film crews start and finish their jobs. All of these factors are why Warner Brothers, Disney, Paramount, Limelight, Castle Rock, Universal, Columbia/Sony and many other major studios have come back to make movies here again and again. “Kauai definitely has a beautiful marriage with Hollywood,” Tillson says.

Other Hawaiian islands are also popular, but Tillson points out that Kauai has an edge, simply for its combination of diverse beauty in a relatively undeveloped, easy-to-navigate compact setting. The reliable infrastructure and enthusiastic local talent also contribute to its enticement, which are necessary for a successful shoot. 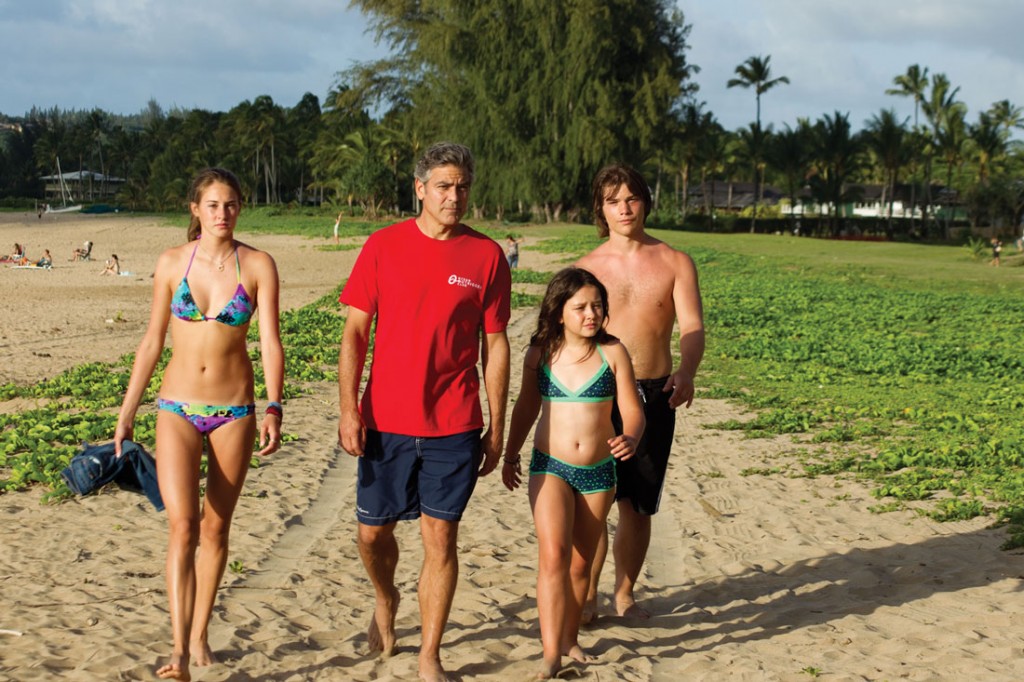 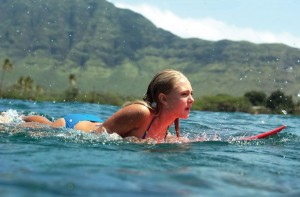 In 1992 Steven Spielberg came to Kauai to make a movie about a fictional island where genetic scientists had created a theme park based on cloned dinosaurs. By chance, the film was shot in the days leading up to the devastating Hurricane Iniki and, in fact, some of the storm footage made its way into the final cut. Iniki quite literally blew away the Garden Island, but it has since gained notoriety in return for its association with the “Jurassic Park” series (all three films were shot mostly on Kauai).There’s no denying Spielberg’s blockbuster had a huge impact on how people perceived Kauai. “ ‘Jurassic Park’ put us on the map all over again in a new light,” Tillson says. She also adds that the movie opened the eyes of filmmakers to Kauai’s true diversity.

In 2007 Ben Stiller made the action comedy “Tropic Thunder” (starring Jack Black, Robert Downey Jr.) in Kauai. Donne Dawson, the film commissioner for Hawaii, says the film, like “Jurassic Park” before it, demonstrated the ability of a relatively small island like Kauai to be a “major force in a tent-pole film (major release), with the capability to support a production of the size and scope of ‘Tropic Thunder.’ ” The successful construction of a complicated set and the transport of a huge cast and crew proved to Hollywood, if it wasn’t already obvious, that Kauai can play ball with the big boys.

It took director James Cameron to turn Kauai into another world entirely with the science adventure fantasy “Avatar” (2009). Most people are unaware that locations like Kilauea Falls and Opaeka‘a Falls appear in the film. These well-known waterfalls are easily missed because so many computer graphics and special effects were added later. But watch “Avatar” again closely, and you may recognize that the dense jungle areas of Keahua Arboretum and the nearly impenetrable forest below Mount Waialeale were used as training grounds where the actors learned how to walk in the jungle. 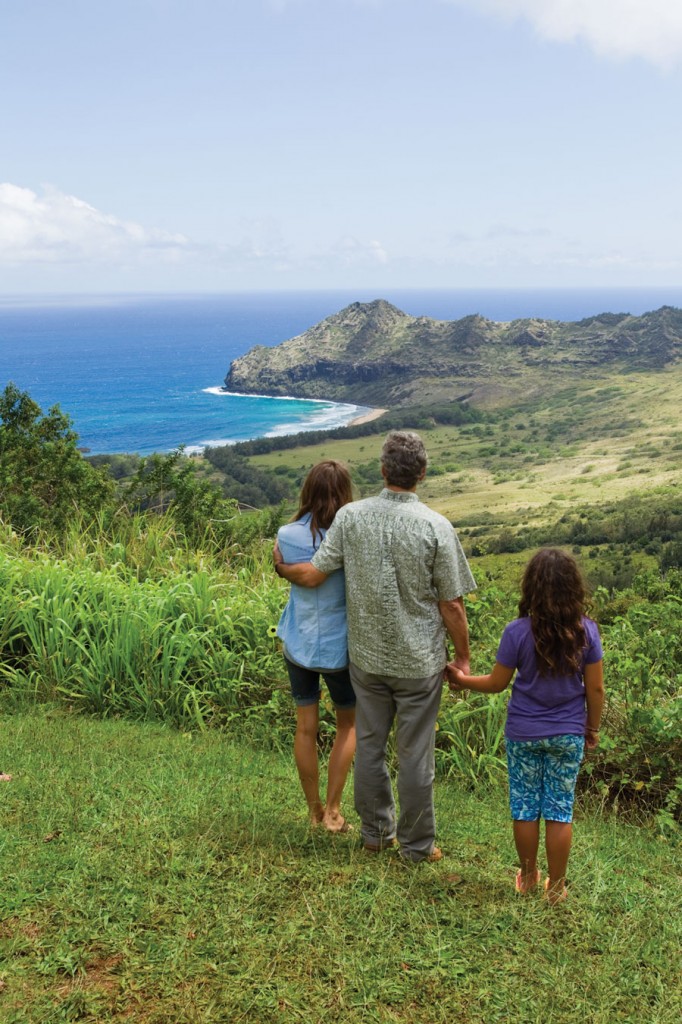 Most recently, the Academy Award-winning Alex Payne film “The Descendants” (2011), starring George Clooney, has led the way in changing how outsiders see Hawaii. Rather than presenting Kauai as just another “beautiful tropical paradise,” Payne used Kauai as the setting for a realistic story about people with real problems. Based on a novel by author Kaui Hart Hemmings, the film, shot largely on Kauai’s north shore in Hanalei, Anini Beach and Princeville, tells a story that weaves in elements of Hawaii’s recent history as well as modern Hawaiian society.Part of the realism of the film comes from the fact that it was shot in whatever the weather happened to be that day. Not every film day was gorgeous and sunny which is, of course, the reality of Hawaii.

Tillson says you don’t need to be from Hawaii to appreciate the story of “The Descendants,” but watching the film adds to the excitement of being on Kauai because you can actually walk where the characters walked and swim where they swam.Other scenes from “The Descendants,” shot in Hanalei’s popular Tahiti Nui restaurant and at The St. Regis Princeville Resort’s own lobby, beach and Presidential Suite, present big screen locations people recognize when they see them.Also shot on the north shore of Kauai in 2010 was “Soul Surfer”—the story of a young champion surfer named Bethany Hamilton. AnnaSophia Robb, Helen Hunt and Dennis Quaid star in the inspirational tale of how a darling of the Kauai surf scene survived a shark attack and ultimately recovered her courage to continue surfing.

“These productions bring an authenticity in terms of showcasing very poignant and, in the case of ‘Soul Surfer,’ dramatic stories known throughout the world before they even got to the screen,” Dawson says.

He also cites a scene in “Soul Surfer” in which young local girls are playing and swimming in well-known North Shore spots (Ke‘e Beach, Tunnels Beach, Hanalei Pier) as an example of how recent films introduced an element of realism that hasn’t been seen before.

One popular film set in Kauai that often goes by unnoticed is Disney’s 2002 animated feature “Lilo & Stitch.” Watch the opening scene closely, and you’ll notice Stitch crash lands his red space ship on Kauai. Throughout the film careful observers will notice scenes that are “Garden Island-esque,” an effect that was deftly executed with the use of “plates” that were shot on location to capture Kauai’s landscapes and scenery to be rendered as animation.

Dawson says the film’s original plot was written for an urban setting, but in the tense days after Sept. 11, 2001, the story was revised out of consideration of recent events— which is why Stitch flies a spaceship between Hawaiian mountains rather than an airplane between skyscrapers. After a scouting trip to Kauai and a chance connection with a local tour guide who helped open the island up, “Lilo & Stitch” was completely re-written to match the island’s mood and demeanor. 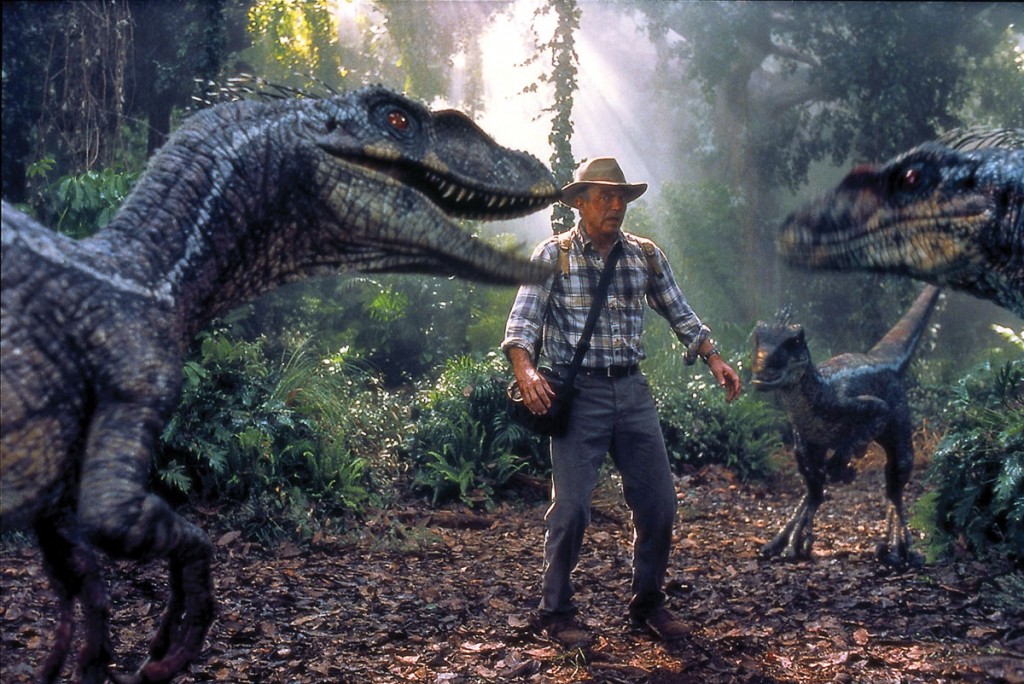 The year 2010 was one of Kauai’s biggest years for movies. Besides “The Descendants” and “Soul Surfer,” the Garden Island was the location of “Pirates of the Caribbean: On Stranger Tides” (Johnny Depp, Penelope Cruz) and the comedy “Just Go With It” (Jennifer Aniston, Adam Sandler).

Georja Skinner, administrator of Creative Industries for Hawaii, says that movies go hand in hand with the visitor industry because both involve outstanding experiences that revolve around Kauai—a place, she says, “where people deeply care about their homes … something that is visible in the films and to people visiting the island.” Movies made on Kauai, and frequently their accompanying soundtracks, allow people to connect with the island, from far away and over time, she says.

“Kauai is a pristine and beautiful environment that everyone works hard to keep that way,” Skinner continues. “For visitors, it’s an added bonus to be able to immerse themselves in those locations they’ve seen on television and in films or heard about in songs.”Ultimately, though, it’s the island’s natural beauty, both rugged and fragile, from its beaches to its forests, mountains and valleys that leave Hollywood’s heart aflutter, always pining for the next visit.

For guests looking to go beyond simple Hollywood site seeing, The St. Regis Princeville Resort has partnered with Kipu Ranch Adventures to craft a VIP movie tour, which offers an intimate, rare glimpse of some of Hollywood’s most famous and celebrated locations. Developed exclusively for St. Regis Princeville guests, the tour is offered on the lush, green Kipu Ranch, a working cattle ranch once owned by Hawaiian royalty.

This tour is ideal for small groups, families and friends, making for a private experience tailored to specific guest needs. This experience was inspired by the 2010 filming of “The Descendants” (starring George Clooney), which used The St. Regis Princeville’s lobby, beach and Presidential Suite as a location.Only top guides are selected to lead tours, which include visiting the most scenic areas of more than 3,000 acres of Kipu Ranch. Guests are taken on Kawasaki 750 Teryx-4 vehicles, which provide maximum safety, comfort and closeness to the environment.

As you tour, your guide will point out locations you may recognize from “Indiana Jones: Raiders of the Lost Ark,” “The Lost World: Jurassic Park,” “Mighty Joe Young” and, most recently, “The Descendants” and “Pirates of the Caribbean: On Stranger Tides.”

Guests will be offered Hawaiian snacks and an assortment of cold drinks during the tour. For more details, and to reserve this very special tour, please visit the concierge desk.