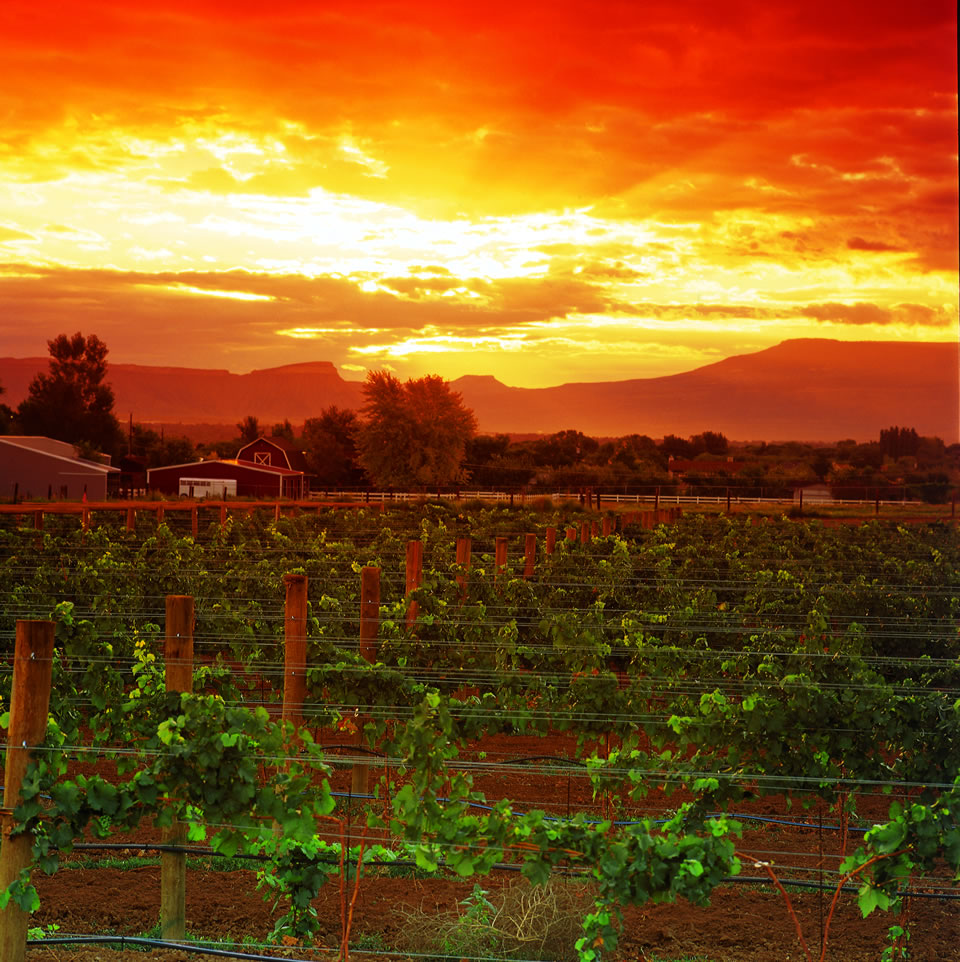 Mention Colorado and certain things will immediately spring to mind: epic skiing; the iconic Red Rocks Amphitheatre; rugged, snow-capped mountains. Perhaps you think of Coors Field, cattle and cowboys. The region is also recognized as a destination to indulge in a quality meal. Lamb and beef, Olathe sweet corn, juicy Palisade peaches and award-winning microbrews are just a few of the state’s claims to fame.

Residents and visitors alike not only want, but expect to have fresh, locally sourced ingredients used in their dishes when dining out around town. It only makes sense that this philosophy would extend to its beverage offerings—including wine. Local winemakers are working to fill the growing demand, and much like Denver has exploded onto the national culinary scene in recent years, western Colorado is gaining a reputation among wine aficionados as a must-visit locale for premium pours.

Ripe for the Drinking

Most of Colorado’s grape-growing action takes place in the Grand Valley American Viticultural Area (AVA), about 40 miles east of the Utah border. Here, De Beque Canyon cedes to the fruit orchards in the valley of Palisade (where those famous Georgia-rivaling peaches come from). The Colorado River circulates air to the region throughout the year, and the Grand Mesa—the world’s largest flattop mountain, covering hundreds of square miles—provides shelter to crops cultivated on the valley floor. For frame of reference, the town of Palisade sits at 4,800 feet; the mesa rises more than 6,000 feet above sea level.

This combination of geological wonders makes for a climate that averages about 10 degrees warmer than along what is referred to as the Front Range, which comprises the more densely populated areas of the state from Fort Collins to Colorado Springs. It’s here that the vast majority (85 to 95 percent) of the state’s grapes are grown. The physical qualities of the area are often compared to the Mendoza Province wine region in Argentina: Both areas have rivers, and each receives minimal rainfall, making irrigation a necessity but mildew much less of a concern.

Another popular growing region is the West Elks AVA, which has been likened to the Provence region of France and encompasses the area between the old mining town of Bowie, just 35 miles west of nearby Delta. Known as the North Fork Valley (the north fork of the Gunnison River runs through the fertile basin), the region is home to the largest concentration of organic farms in the United States. Like Palisade, the countryside is filled with small-scale, family-owned orchards growing cherries, apples, peaches, pears, apricots, plums and wine grapes.

The growing season in the Grand Valley AVA is short compared to those of California, Tuscany and Bordeaux. And in the West Elks AVA, growers’ window of opportunity is even slimmer: Due to the higher elevations (5,400 to 7,000 feet), the growing season starts later and sees 30 percent fewer days between spring and fall frosts than the Grand Valley.

Climate is often seen as the Colorado wine industry’s biggest challenge. Growers can face harsh winter temperatures and untimely spring or fall frosts. Still, these very issues can also offer many benefits, says Doug Caskey, executive director of the Colorado Wine Industry Development Board. “The low humidity and lack of precipitation means we have very little disease and pest pressure, so we use very few chemicals in growing our grapes,” he explains. “Since we rely on irrigation for water, we have greater control over the ripening and development of the grapes than if we left everything up to nature. … Our soils are more alkaline and therefore more akin to Europe.”

Grapes of the Western Slope

Because of the high altitude in the Grand Valley and West Elks AVAs, Colorado-grown grapes get more sun exposure. “Grape skins can get sunburned,” explains Sally Mohr, a Colorado-based master sommelier. “In their defense, the skin thickens, which provides extra nutrients and tannins—and thus flavors—in red wines.”

Colterris Wines in Palisade specializes in those expressive reds. The winery, which grows only traditional Bordeaux-style grapes, gets its name from the combination of Colorado and “terris,” meaning “from the land” in Latin. “All of our wines will always be from Colorado grapes. That’s important to us,” says Theresa High, who owns and manages Colterris with her husband, Scott. “Palisade has a wine reputation that goes back over 100 years. The growing conditions are very different from anywhere else in the state, let alone the U.S. or the world.” One of the most unique wines coming out of Colterris is its Coral white cabernet sauvignon—an unusual and sophisticated wine to begin with, but especially so coming from a Colorado vineyard.

Other grapes that do well in the region are viognier, chardonnay and merlot. “In the cooler parts of the state, riesling flourishes and is made in both dry and sweeter styles,” Caskey says. “The Bordeaux varieties all do well here, from sauvignon blanc and semillon on the white side to cabernet franc and petit verdot on the red side. Petit verdot is seldom bottled by itself elsewhere, often due to its susceptibility to mildew and other diseases. Syrah and the other Rhone varieties also do well.”

“What is really showing promise is malbec, which is also grown at altitude in Argentina,” Mohr adds. “There is a lot of experimentation with different grapes from other major wine-growing regions from around the world to see what is best suited to this climate.”

A Question of Taste

Not every Colorado vintner is lucky enough to have his or her own vineyard. The local wine industry is just beginning to come into its own and, according to urban wineries like Denver’s Balistreri Vineyards and Infinite Monkey Theorem, there aren’t always enough Colorado grapes to go around. This year’s harvest, in fact, was down about 50 percent from a full crop due to winter damage and spring frosts, forcing some of the state’s wineries to purchase grapes from California and Washington.

Instead of growing their own grapes, many Colorado vintners infuse their unique styles into the winemaking process. At Balistreri Vineyards, one of owner Julie Balistreri’s goals is to produce wines the same way her father, whose family hails from Sicily, always created his homemade wines. “Our white wines are made the same way we make our reds—fermented on the skins,” she says. “They are unrefined and unfiltered.” The method makes for a more full-bodied white than some wine lovers may be drawn to.

Winemakers like Balistreri also “vineyard-designate” and label their wines, meaning they refrain from mixing grapes from different vineyards to create a blend. This year, about 70 percent of Balistreri’s grapes came from Colorado’s Western Slope. “The unique thing about Colorado grapes is that many of the wines have a spiciness to them because of the soil,” Balistreri says. “Syrah grapes grown 2 miles apart from each other can be completely different. We want to taste not only a reflection of terroir, but of the grower’s style.”

At The Infinite Monkey Theorem in Denver’s trendy River North Art District, owner Ben Parsons says the winemaker’s modus operandi is to shake up the wine industry. “I wanted to disrupt an industry that is very sterile, boring, romanticized and pretentious, and try to have fun with it, hence the name, label, the can and everything that we do here,” he says.

The company’s wine-on-tap program has been very successful in Colorado restaurants, and Parsons—a staunch environmental advocate—was influential in changing Colorado law to allow any winery in the country to send their finished wine to the state for kegging and local distribution. The Infinite Monkey Theorem wines come in lightweight, recyclable aluminum cans, which are wildly popular with sustainably minded locals. “The wine industry is 4,000 years old,” Parsons explains. “For some reason, they’re still using corks and glass bottles.”

It’s renegade winemakers like Parsons who are spurring the region’s growth, making it an area to watch when it comes to production. And even though the state’s wine scene is relatively young in comparison to others, it’s already accrued some heavy-hitting fans.

“There are some beautiful Colorado wines that I enjoy just as much as any wine from anywhere in the world,” says Mohr, the well-traveled master sommelier. Plus, the local scenery is hard to beat, and the picture-perfect views that draw millions of adventurers to the state each year are every bit as dramatic when viewed over the rim of a glass of Colorado wine.

Although production doesn’t take place in town, visitors can sample many varietals from Colorado winemakers at these premier Aspen restaurants.

Matsuhisa: If you’ve dined in one of chef Nobu Matsuhisa’s many restaurants, you know his cuisine is simple but innovative. Don’t miss the chance to indulge in his signature dish, black cod with miso, served alongside a glass of The Infinite Monkey Theorem’s syrah or chardonnay. (matsuhisaaspen.com)