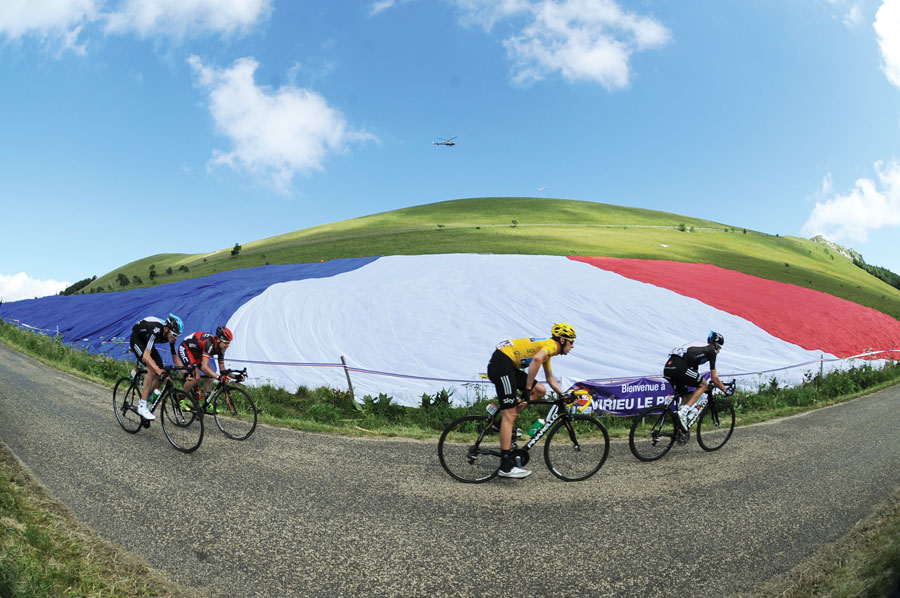 Often referred to as “the big loop” in French, the Tour de France celebrates its 100th anniversary as one of the most celebrated sporting events in history. 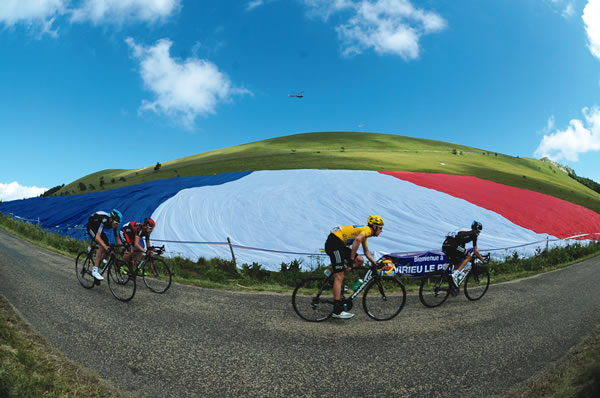 Marking the Tour de France’s 36th visit to the capital of the French Riviera, Nice, the 100th anniversary of the race is not only a celebration of the sport’s illustrious history but also the remarkable athletes who compete for the privilege of donning the iconic yellow jersey. For a century, cyclists in the Tour de France have been pedaling for more than 2,100 miles over cobblestone roads, along sheer cliffs and up narrow, daunting mountain roads, all for the opportunity to sport the gold badge of honor.

“The event defines the word epic,” says Houston Chronicle sportswriter Dale Robertson, who’s covered nine tours during his nearly 40-year career. “The mountain stages in particular are amazing, with guys doing seemingly impossible things. The roads are lined with crazy folks, and there’s probably less crowd control than there should be, but that’s part of the magic.”

“Magic” is one word to describe the Tour de France, which takes place June 29 through July 21 and encompasses more than 2,161 miles of terrain. The race, for the first time in its history, begins on the French island of Corsica before riders traverse a loop through France, ending with the finish at the Champs-Élysées in Paris. In between, 21 towns with names that exude romanticism, like Marseilles and Saint-Gildas-des-Bois, will become centers of excitement as armies of cyclists, team support vehicles, reporters and motorcycles sweep through the quaint villages.

“The tour is unlike any other bike race, and it’s full of tradition,” says U.S. rider Tejay van Garderen, who is competing in his third tour this year as a member of the BMC Racing Team. BMC and Garmin-Sharp, both based in the U.S., are two of the 19 pro teams representing 12 countries that are participating in this historic edition of the tour. “Guys are asked to squeeze everything out of their bodies, and then they have to come back again the next day and do it again … and again … and again,” van Garderen continues. 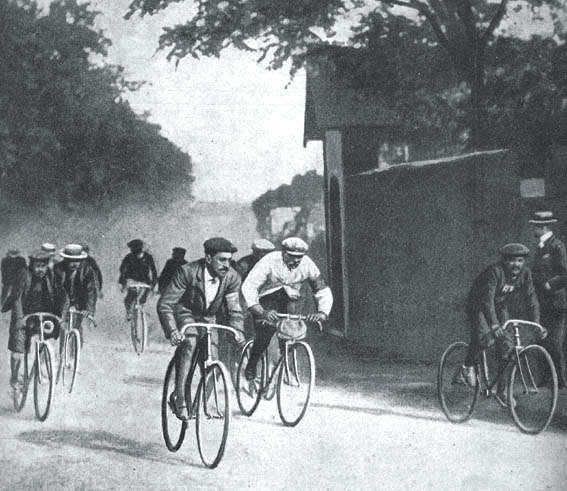 Since the Tour de France’s founding in 1903, it is estimated that more than 10,000 cyclists have competed in the tour. The 2013 race actually marks the 110th year since its inception; however, it is considered the 100th due to a hiatus during World Wars I and II.

As intriguing as it is complex, the Tour de France was originally developed as a marketing tactic. Henri Desgrange, a former holder of the cycling world hour record and editor of the L’Auto, a general sports newspaper, was engaged in a fierce circulation battle with the more established Le Vélo publication. While bicycle races held on velodrome tracks were most popular at the time, long-distance road races were beginning to capture the imagination of the public.

After convincing the owner of L’Auto to finance the project, the first Tour de France was announced on the newspaper’s yellow-colored pages (the reason why the leader’s jersey is yellow) and covered more than 1,960 miles. The 32-year-old Frenchman Maurice Garin, a former chimney sweep, defeated a field of about 60 riders to win the inaugural race. From the start, the race proved incredibly popular and, by association, achieved its goal of boosting the circulation of L’Auto.

For the 1910 race, Desgrange decided to increase the difficulty by adding two days of mountain climbs in the Pyrenees, with legendary climbs like Tourmalet, Aspin and Aubisque incorporated into the route. The addition of the mountain climbs led the way for more versatile riders to gain an advantage in the tour over the bigger, more muscular riders who prevailed in earlier years.

Riders in those nascent days faced obstacles that modern riders could not possibly fathom, one of the main issues being the lack of gears on their bikes. Before derailleurs (bicycle gears) made their appearance in the 1930s, riders had to dismount and flip the rear wheel around to access the cogs designed for climbing or descent. They also wore spare tires and tubes like bandoliers due to the frequent flat tires from the route’s cobblestone, dirt and gravel roads.

Throughout its history, the event’s organizers have gone out of their way to make the tour not only a physical but also mental challenge. For example, the 1926 race, the longest in history at more than 3,500 miles, came to be called the “tour of suffering” due to some of the most rigorous mountain climbs ever contested. In one especially brutal stage, in which riders had to traverse five mountain climbs, only 47 riders out of the field of 76 had clocked in by midnight, with 12 deciding to abandon the tour altogether.

Through it all, the tour became so embedded into the French psyche and culture that it grew into more than a sporting event, particularly in the postwar era when the crowds lining the roads swelled to the colossal levels that exist today, and French riders such as the dashing Jacques Anquetil, Louis Bobet and Raymond Poulidor became major celebrities.

But in the 1960s and 1970s, cycling’s biggest star of the postwar era, Belgian ace Eddy Merckx, would dominate the race. Nicknamed “the cannibal” for the merciless way he conquered the peloton (the main group of riders), Merckx won five tours, including four in a row. The late 1970s through the mid-1980s saw the end of the French domination;, in 1985, five-time champion Bernard Hinault was the last French rider to win a race.

While the sporting event is a time-honored tradition all over the world, as well as one of the greatest feats of athletic heroism, it has also sparked danger and controversy. Over the years, three riders have died during the race, the last being Italian Fabio Casartelli in 1995 when he crashed at high speed. Recent years’ doping scandals, including the Lance Armstrong debacle, have swept controversy across the event. Last year’s winner, however, Bradley Wiggins of Great Britain, prevailed in the aftermath of the event’s doping allegations and was celebrated as a “clean” racer. 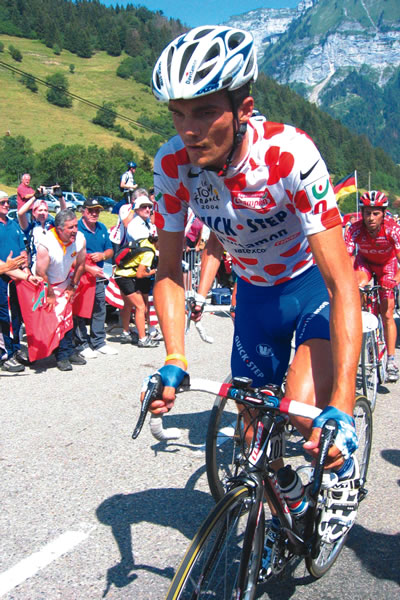 Despite the race’s somewhat scandalous reputation in recent years, the event remains hugely popular and profitable, especially for the stage cities. In fact, each of the 21 towns along the route bid on the honor of being a host city. “It’s very exciting in the small towns, where it’s like a big fair and a source of money, but the tour doesn’t choose the start and finish locations magnanimously,” Robertson says. “They have to pay for the privilege.”

For cyclists, the race is a career-defining competition. In the 2011 race, van Garderen, a native of Bozeman, Mont., who now lives in Boulder, Colo., helped BMC’s Australian team leader Cadel Evans win the yellow jersey. As one of three cycling grand tours (multiweek stage races), along with the Giro D’Italia and the Vuelta a España, van Garderen says the Tour de France is certainly the most unique.

“Any race that is three weeks long is grueling, but what makes the tour even tougher is the attention that’s focused on it,” says van Garderen, who wore the white jersey (best young rider age 25 and under) in the 2012 tour and finished fifth overall. “Everybody wants to do their best and every team wants a [good] result. There’s a lot of media attention, and it adds up to a lot of pressure to perform.”

Van Garderen, who has spent the last several months training, says that, oftentimes, the training is really racing. “That means spending four to seven hours on the bike competing in a race that might be more than 150 miles,” he explains. “Beginning with the work I do in the wind tunnel over the winter, and my training at home in Boulder … I work to build a good fitness base.”

One aspect of the race that new fans may not realize is that the tour is a team sport, where even the fastest and strongest riders cannot win without the support of their team. In the hierarchal team structure of the tour, every member knows his role. Some are great climbers and some are fantastic sprint racers, but every team has a leader—the best overall rider—that the other teammates support by protecting him from the ever-present dangers of the peloton, and by chasing down viable contenders for the yellow jersey and forcing them to expend more energy.

“My primary goal this year will be to help our team leader [Cadel Evans] try to win the tour again,” van Garderen says. In addition to the honor of wearing the yellow jersey, the overall winner collects approximately $588,150 and more than $1 million in total, which is shared among the team members.

Van Garderen also notes that the popularity of race, coupled with the intimate distance of the fans lining the route, help give it a character unlike any other event in the world. “[The closeness of the fans] is something you don’t really notice because it’s like that at a lot of races throughout the year, but it can be dangerous, especially on the narrow, mountain roads,” he says. “We’ve seen plenty of collisions with spectators, so it’s a danger that is there, but not necessarily something you can do much about.”

While this edition of the tour is sure to raise excitement levels higher than usual—in Nice, the tour begins with four days of nonstop festivities, including a zone open all day with shows from mountain biking to trial champions—there’s one thing that remains the same: the anticipation of who will vie for the honor to wear the yellow jersey. For Robertson, who’s covered Super Bowls, World Series games and World Cups, the Tour de France stands alone. He says, “TV doesn’t do it justice … The spectacle of the event exceeds anything I’ve covered. It’s basically a three-week holiday.”