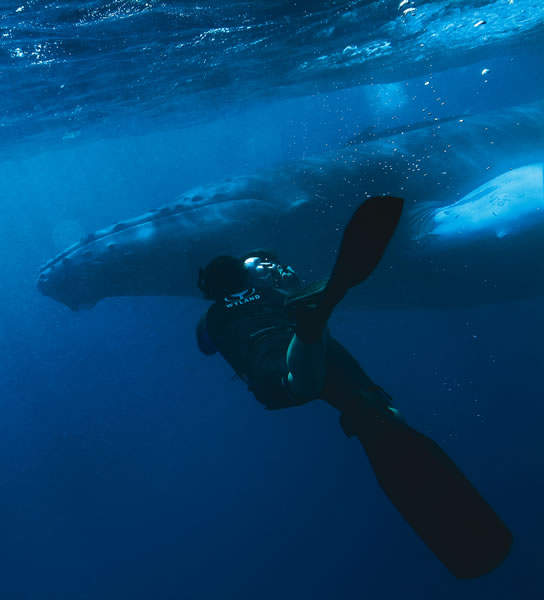 Given that world-renowned marine life artist Robert Wyland (known in art circles simply as Wyland) captures the most miniscule details in his art, you would assume that he’s spent his entire life immersed in the ocean. Surprisingly, the water lover grew up far from the beach in Detroit, and didn’t step foot into the Pacific Ocean until he was 14.

In 1971, that all changed during his first visit to Laguna Beach when he jumped into the ocean and spotted two gray whales spouting offshore near Main Beach. From that day on, he was hooked. He fell in love with the ocean and all the creatures that call it home, and was drawn to share these beautiful creatures with the world through art. He was also enamored with the charm and art movement of Laguna Beach.

“Laguna is an internationally known art colony,” says Wyland, who recognized his love for creating art at just 3 years old. “I was drawn to this place.”

In what seems like no time at all, he went from sketching dinosaurs as a toddler to creating a global brand of art with collectors worldwide.

On his 25th birthday in 1981, 10 years after his initial encounter with the gray whales, Wyland painted a life-sized portrait of the mammals on the side of a building (now his gallery) on Pacific Coast Highway in Laguna Beach. This was the first of his now-famous “Whaling Walls.” “It’s difficult to paint an animal the size of a whale on a small canvas,” Wyland says. “I wanted to paint true-life size.” 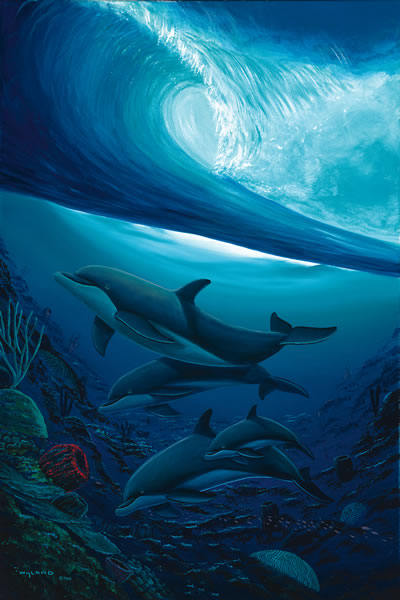 Although there has been some criticism about his murals being used as “free publicity,” he defends them by saying he is using them to try to raise public awareness about the need to protect the ocean and animals that live in them. Even amid the controversy, Wyland set out to achieve his goal of creating 100 “Whaling Walls” worldwide. In 2008, 27 years after his first mural was finished, he saw his dream become a reality and achieved one of his biggest accomplishments to date when he finished his 100th marine life mural in Beijing, China, to commemorate the Green Olympics.

For the final mural, titled “Hands Across the Oceans,” Wyland invited thousands of children from China and other countries to paint alongside him to create more than 100 paintings, measuring a half-mile long, that were displayed at the river bank in Chaoyang Park.

“We have to get the kids involved,” Wyland says. “ … I’d also love to see the young people take the initiative and take the lead in water conservation and challenge their parents at home. Without water, we don’t have anything. We need to share this message through art, conservation and community.”

Wyland, a bachelor who now splits his time between homes in Laguna Beach, Florida and Oahu, continues to challenge himself through his art. Having studied at the College for Creative Studies in Detroit on a painting and sculpture scholarship, he enjoys using his talent to depict marine life through watercolor, acrylic and oil paintings, sculpture, Chinese brush paintings, fine art photography and Japanese sumi-e paintings. In 2007, he received an honorary doctorate from the Laguna Beach College of Art and Design.

Wyland first started gaining notoriety at the Laguna Beach Sawdust Festival, where he sold his work for 13 years. In 1978, he opened his original gallery in Laguna Canyon. Since then, he has moved his gallery and studio to a location on Pacific Coast Highway in Laguna Beach, which is his only one in Orange County. Now with 25 galleries nationwide and an e-commerce website, Wyland is truly sharing his art with the world. As if being a world-famous artist isn’t enough, he has also dabbled in music (Wyland Records), wine (Wyland Cellars) and hospitality (he formerly owned a hotel in Hawaii). 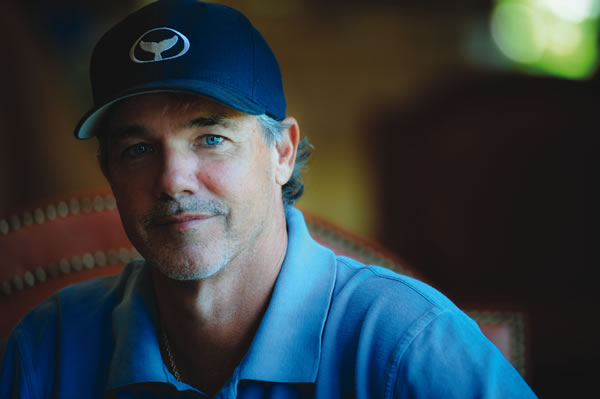 Additionally, the artist has garnered numerous accolades: holding the Guinness World Record for largest mural; creating the California “Whale Tail” license plate; earning the Earth Day Peace Bell Award; having a series on the Animal Planet Network; publishing several books; winning Best Film at the San Diego Film Festival for “Wyland: Earth Day”; painting a mural on the side of an airplane and an America’s Cup yacht; and being an official artist for the Olympics.

“Be grateful that you have a gift, and share that gift,” Wyland says. “I don’t believe in being a starving artist. If you’re doing what you love, that is the pinnacle to success. I love to create beautiful things, make a difference and affect millions of people.”

More than obvious, Wyland’s inspiration comes from the ocean. “From people like marine conservationist Jacques Cousteau, we learned the ocean is a place of beautiful, intelligent animals with light and color,” Wyland says.

Wyland has managed to merge his passion for art with his interest in marine biology, immersing himself in the habitats of underwater life by scuba diving off Shaw’s Cove in Laguna Beach. “Laguna is one of the premier dive sites, not only in Orange County, but in the world,” Wyland says. “With the kelp coming back and the water getting clearer thanks to conservation efforts, the fish are thriving.” 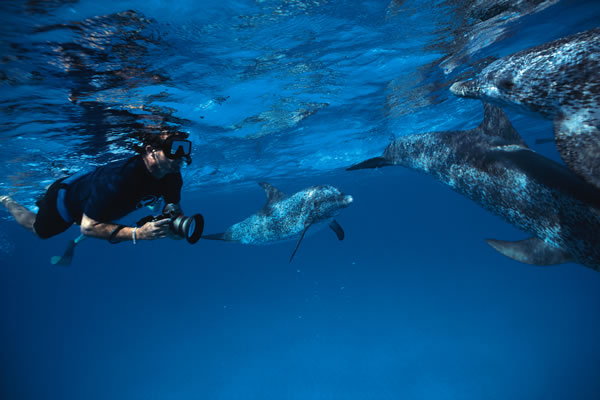 For nearly three decades, Wyland has spent endless hours scuba diving with sea creatures all over the world, and in 2010 he was inducted into the International Scuba Diving Hall of Fame. “The moment I’m immersed in the ocean, I have a connection,” Wyland says. “I’m more comfortable underwater. I’m a water sign (cancer). I have a deep respect for it and have never had a fear of it.“

Currently his fascination is with sharks, including tiger, blue and great whites, which is reflected in his artwork. He does, however, realize that everybody has their own favorite animals such as dolphins, turtles and orcas. With collectors in all 50 states and more than 100 countries, he says he tries to create something for everyone.

To capture the essence of the large and delicate life in the sea, he approaches them cautiously and with a fierce inquisitiveness. One instance in particular that has stuck with him was his eye-to-eye encounter with a 90-foot blue whale for the documentary film “Wyland: A Brush with Giants.”

“When I’m diving, I’m painting with my mind’s eye. I reflect that back into my art,” Wyland says. “I don’t just sit home and watch Discovery [Channel], I actually go out and discover.”

A special technique he uses to get close to the marine life that he paints and sculpts is to, ironically, ignore them. “Don’t swim at them,” he says. “If you chase them, they’ll swim away. Let them get acclimated to you. The ‘Wyland way’ is to let the animal see you and get used to you. Most marine life is naturally curious and they will eventually come to check you out.”

Most of his dives last about an hour, and he says that the “good stuff” hangs out at around 40 to 60 feet of water. He also free dives because some of the animals don’t like the bubbles that come with scuba diving.

To ensure that he gets the right shot, Wyland dives with his Canon EOS 5D Mark III camera with Aquatica waterproof housing and Ikelite underwater strobes. “I try to use the best camera and the best technology to get the best images,” Wyland says. 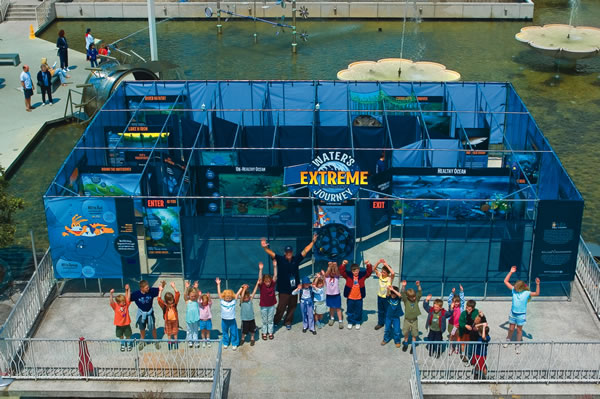 Taking inspiration from Canadian wildlife painter Robert Batemen, Wyland strives to capture the natural world as a way to open the conversation on environmental conservation.

In an effort to start his own ocean preservation efforts, the Wyland Foundation was established in 1993. “Whether it’s ocean or fresh water animals, I like to focus on animals that really need a voice. I try to use my art to engage the public,” Wyland says. “If everybody does a little bit, small things can make a world of difference.”

Wyland adds that he devotes 50 percent of his time to the foundation in an effort to affect positive change because he says it fills his soul. He wants to challenge every citizen to think about water conservation and ocean preservation and inspire others to take action.

“Water is life,” Wyland says. “We take it for granted. We need to conserve and protect it rather than wasting it.”

When asked what he is most proud of, Wyland replies that it’s the impact he’s having on kids throughout the nation. “It’s important for me to empower them to be ambassadors for the planet,” he says. “This is the generation to ensure we have a healthy planet.”

While it seems that Wyland has accomplished all that he set out to do, he’s still going to new heights—and depths—for his passion. In honor of celebrating Wyland Galleries’ 35-year anniversary, he has set a 25-year goal to create 100 larger-than-life monumental sculptures with water elements in 100 cities worldwide, with 10 being, of course, underwater. He hopes that this series will be “jaw dropping” and feature local animals in an effort to protect the natural world.

Most of all, he’s paving the way as a new breed of artist—an art activist, so to speak—using art as a microphone for all the voiceless creatures beneath the ocean. 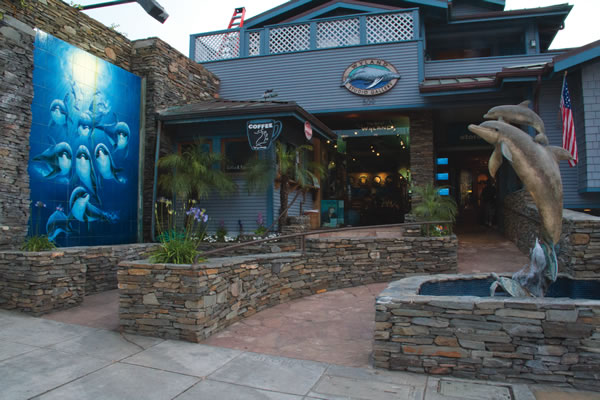 Celebrate 35 years of Wyland Galleries with Wyland for a special anniversary gallery appearance at Wyland Galleries Laguna Beach from 6-10 p.m. Join the artist for an evening of art and conservation as he reveals his newest works of art and shares the latest on his travels, news and environmental conservation projects. (509 S. Coast Hwy., Laguna Beach; 800-995-2631; wyland.com)