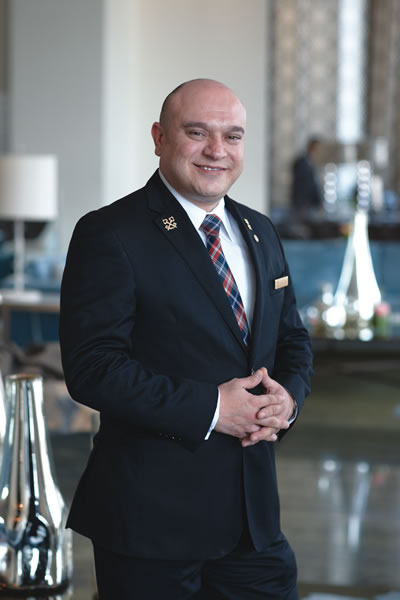 There is always something exciting taking place in Mexico City. Arturo Ortiz, chef concierge at The St. Regis Mexico City, has insider knowledge on the best places to truly experience all that this bustling and colorful metropolis has to offer. Here, he recommends the best places to visit for decadent Mexican desserts, stylish apparel and live music.

A Mexican dessert is the perfect finish to a savory meal—or as a sweet treat any time of day. Ortiz suggests several spots for enjoying dessert in the city, from upscale restaurants to traditional candy makers.

JASO offers one of the finest selections of desserts in the city, Ortiz says. The contemporary American restaurant and bakery, run by Executive Chef Jared Reardon and pastry chef Sonia Arias, a husband-and-wife team, offers a dessert menu focused around fruit and chocolate. The menu includes everything from homemade ice cream with rich chocolate cake to creme brulee with pears. (52-55-5545-7476; jaso.com.mx)

Another spot Ortiz highly recommends for dessert is SAL Y DULCE ARTESANOS. It features handmade pastries, cakes, cookies and other delectable delights prepared using a combination of Mexican and European methods. The pastry shop has several locations throughout the city, two of which are less than 10 minutes from the hotel by taxi, according to Ortiz. (52-55-5280-9789, 52-55-5256-4618; salydulceartesanos.com.mx)

“DULCERIA DE CELAYA [has] the best selection of Mexican candies,” Ortiz says. The store, which was founded in 1874, is in the city’s historic center. Its history dates back more than 100 years; they still use a traditional method of preparing the classics and respect the old style of candy making, he says. (52-55-5521-1787; dulceriadecelaya.com)

PINEDA COVALIN specializes in Mexican prints captured in multiple accessories for men and women, he says. The boutique features colorful scarves, ties, purses, clothing and more, incorporating ancient cultural influences into contemporary designs. There are several locations in the Distrito Federal, including one on Campos Elíseos. (52-55-5282-2720; pinedacovalin.com)

CARMEN RION is a Mexican designer known for her exclusive and unique women’s fashions, Ortiz adds. Rion has been noted for her work with Mexican craftspeople and artisans to create her clothing, which includes day and evening wear, shoes, jewelry and even bridal gowns. (52-55-5264-6179; carmenrion.com)

From classical concerts to rock ’n’ roll, live music lovers will find an extensive variety of sounds in Mexico City.

“The Fine Arts Palace, or PALACIO DE BELLAS ARTES, is the most beautiful forum to enjoy a concert,” Ortiz says. Local and international opera singers and philharmonic orchestras from countries throughout the world have performed on the stage here. Tiffany & Co. of New York created the spectacular 24-ton stained glass “stage curtain,” a foldable panel featuring a volcano landscape. (52-55-5512-2593; palacio.bellasartes.gob.mx)

Another important venue for live music is the NATIONAL AUDITORIUM, Ortiz says. A modern space, the theater welcomes visitors for a diverse range of popular concerts and plays. (52-55-9138-1350; auditorio.com.mx)

For those seeking a lively show, FORO SOL, the PALACIO DE LOS DEPORTES and the ARENA CIUDAD DE MEXICO host upbeat music performances and festivals. “It offers an incredible option to enjoy the greatest and famous rock stars, singers and bands,” Ortiz says. He notes that these venues, which can each accommodate 20,000 or more music fans, are the premier theaters for hosting major musical events in Latin America. Top stars such as U2, Paul McCartney, Madonna, Carlos Santana, Bruce Springsteen and many others have performed at these venues. (Foro Sol: 52-55-5764-8415; ocesa.com.mx) (Palacio de los Deportes: 52-55-5237-9999; ocesa.com.mx) (Arena Ciudad de Mexico: 52-55-6235-7016; arenaciudaddemexico.com) B