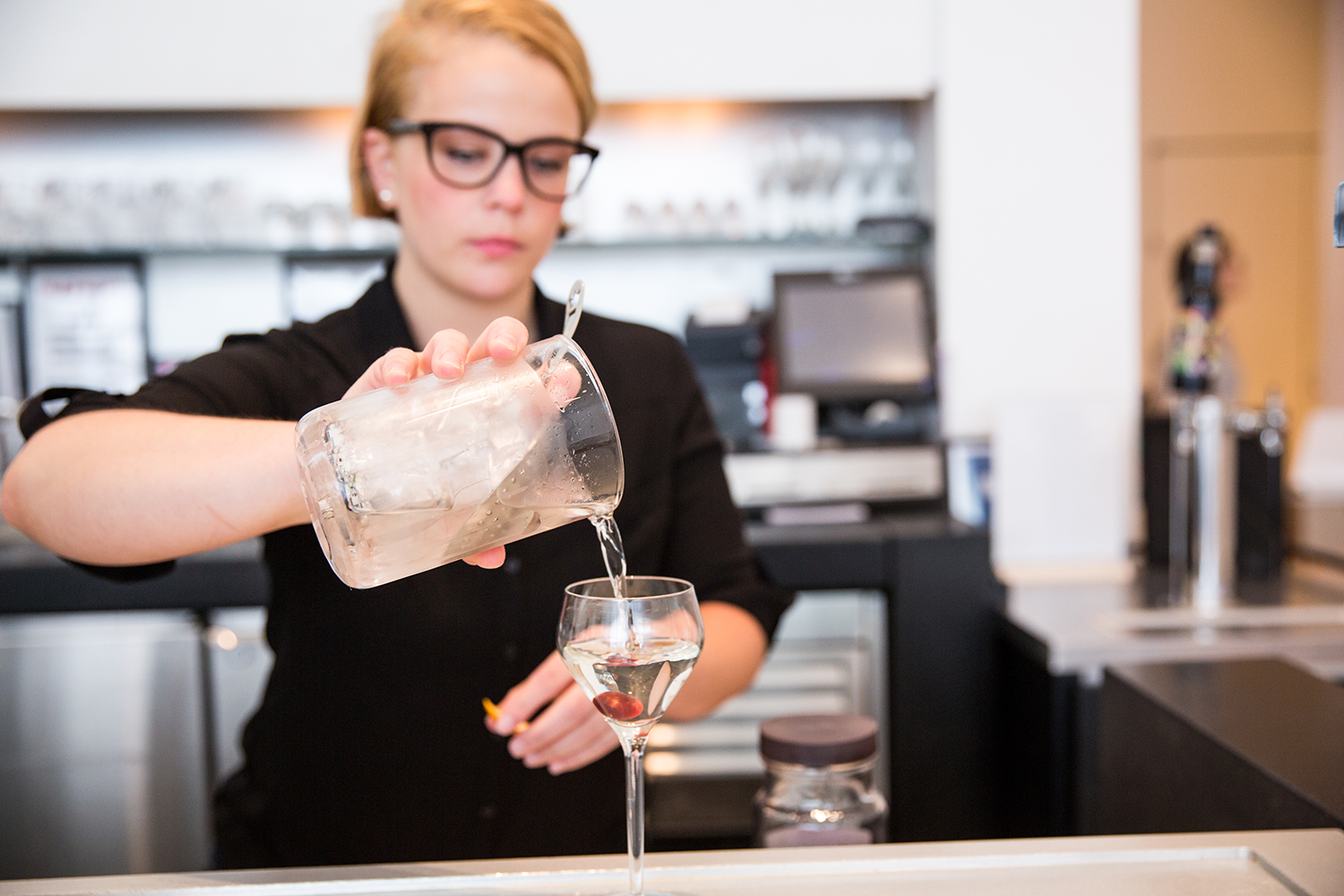 Add a pinch of ingenuity, a dollop of enthusiasm and an extra dash of talent. Mix well, and the result is a generous helping of New York City’s youngest culinary leaders—budding professionals who are making an impact on the local food and drink scene by playing up old traditions and creating many of their own.

The following chefs, mixologists, sommeliers and restaurateurs may be young, but they’re far from inexperienced. Throughout their careers, these 9 individuals—all age 30 or under—have honed their crafts and learned from the city’s top talent. Today, they’ve stepped into the spotlight to shine in their own right as part of the next generation of epicurean adventurers.

Working in the food industry isn’t anything like what you see on Bravo’s “Top Chef,” concedes Jason Wang, the president and CEO of Xi’an Famous Foods, a family-owned chain of specialty Chinese restaurants in New York. “Everyone that’s good has worked their way there and paid their dues,” he adds.

The young CEO is no stranger to hard work—when his family’s restaurant was featured on celebrity chef Anthony Bourdain’s show “No Reservations,” he rolled his sleeves up and lent a hand with everything from prepping dough for the authentic Chinese noodles to cleaning grease traps. He caught the attention of Travel Channel’s Andrew Zimmern, host of “Bizarre Foods,” and the restaurant was again featured on TV.

It’s come a long way since the opening in 2005 as a small bubble tea shop in Flushing—Wang has since expanded Xi’an Famous Foods to include four popular locations in Manhattan, two in Flushing, one in Brooklyn and more on the way, with traditional flavors being the primary focus at each eatery. 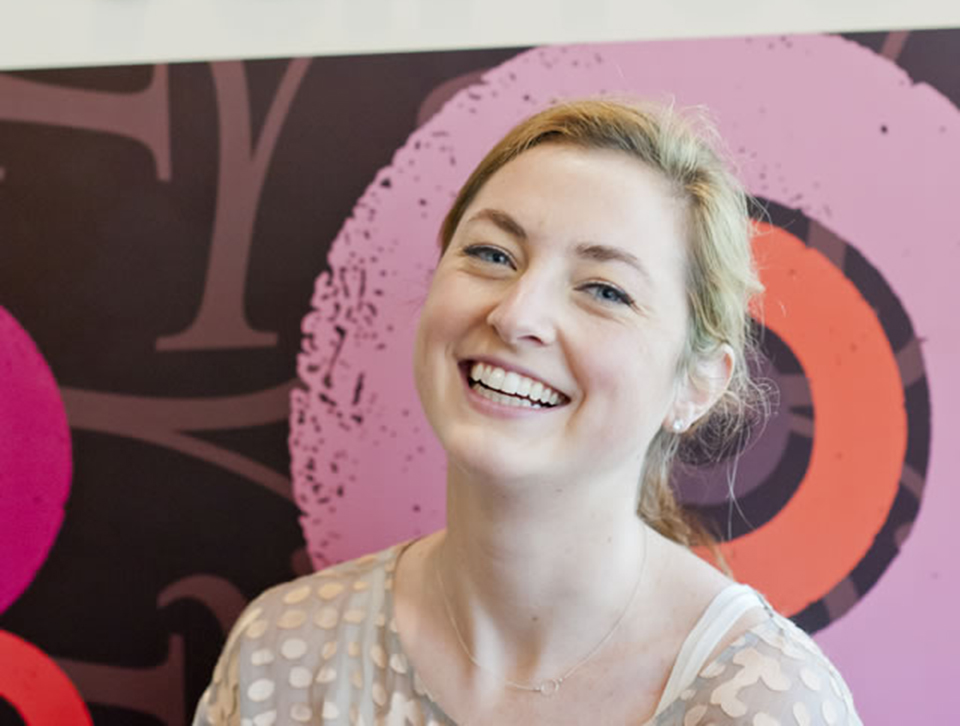 Katzie Guy-Hamilton is living the sweet life. Her impressive culinary resume includes a stint training under esteemed baker Sherry Yard as pastry chef at Spago Beverly Hills, Wolfgang Puck’s first restaurant venture, as well as participation in “Top Chef: Just Desserts” in 2011, where she made it to the seventh week. That wealth of experience culminated in her recognition this year as one of America’s top 10 pastry chefs by Dessert Professional magazine.

Today, she serves as the director of food and beverage for Max Brenner, a worldwide chocolate restaurant company with a location near Union Square in Manhattan. In this role, Guy-Hamilton is currently experimenting with hot chocolates, using her creativity and problem-solving skills to find new ways to add flavor to the rich, warm drinks.

For her, a focus on sweet treats started early on in her life. “I loved to bake for people when I was younger—my brain thought sugar,” she explains of her ingenuity in the kitchen. “… I am [still] playful and flavor-forward.”

With countless honors under her belt, including Wine Enthusiast’s list of top tastemakers under 40 and Zagat’s 30 under 30 for New York City, it’s obvious that Ivy Mix knows a thing or two about imbibing. A former mixologist at Clover Club, one of Brooklyn’s most heralded craft cocktail bars, she also co-founded a national cocktail contest called Speed Rack in 2011. The all-female speed bartending competition—which has launched events in cities that include Chicago, Miami and San Francisco—propels women from behind the bar and into the spotlight while simultaneously raising money for breast cancer education, research and prevention.

Mix explains her interest in mixology came from two seemingly unrelated places: her love of bars and her college degrees in philosophy and art. “When I became a cocktail waitress in a high-end cocktail lounge, the extent of my cocktail knowledge was martinis and Manhattans,” she recalls. “Then when I discovered that I could bartend, which I loved doing, and also be exceptionally creative, I decided that this was the life for me.” 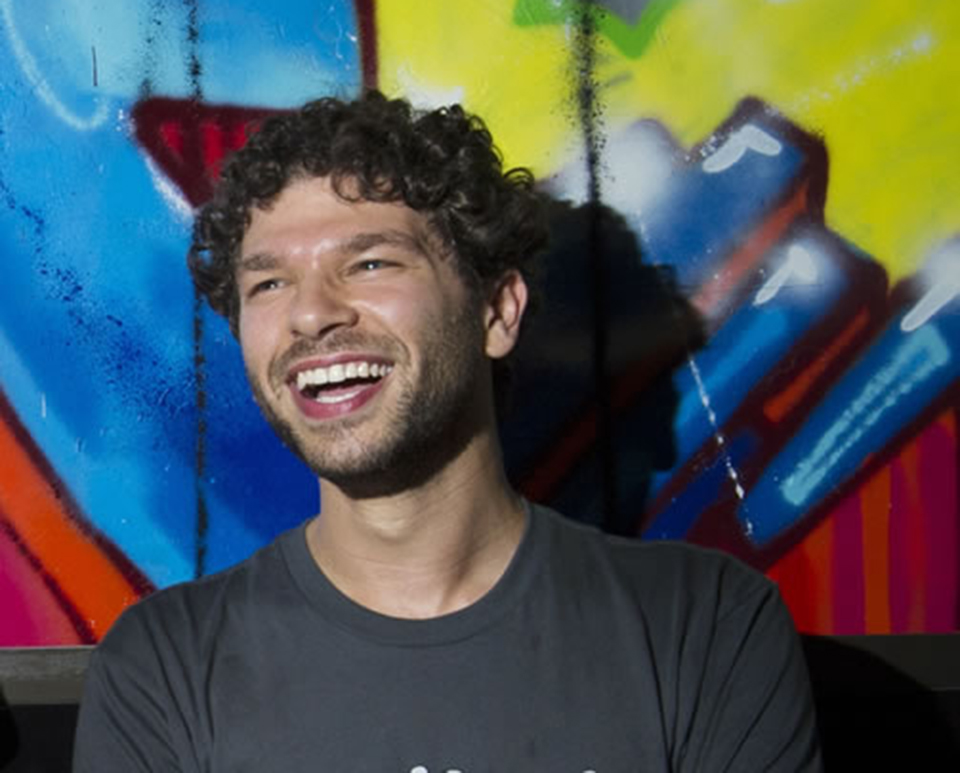 Raised by a single mom, Brad Holtzman would often help with dinner when he was a kid. “I always liked to help lighten the load by getting dinner started, even completed on occasion, before she got home from work,” he recalls. His daily chore turned into a passion—one that led the French Culinary Institute graduate to work at esteemed Manhattan restaurants such as Maialino; Mario Batali’s Del Posto; and Marc Forgione, the namesake restaurant owned by the “Iron Chef” contender. In 2013, Holtzman opened the San Diego-inspired Taquitoria on the Lower East Side with two other Forgione proteges, Matthew Conway and Barry Frish. Forgione himself is even an investor in the venture, which is celebrated by local media for its simple offerings of taquitos made with one of four fillings plus toppings.

“The crunch of every perfectly fried taquito inspires me … and that little smirk on my team’s face when they hear compliments about the food,” explains Holtzman, who hopes to introduce other cities worldwide to Taquitoria. 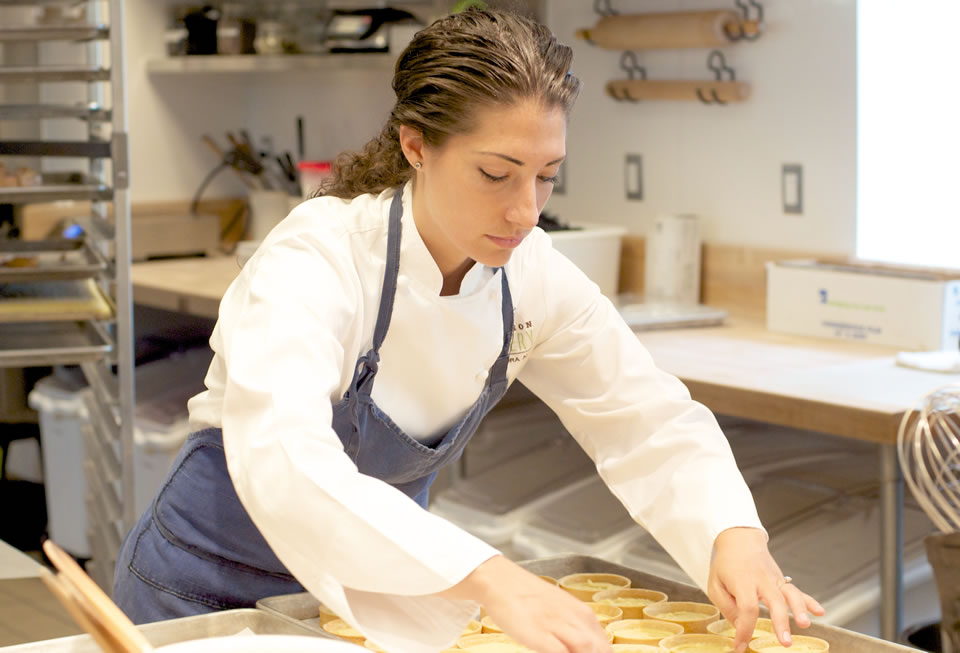 The ambitious Alessandra Altieri has proved she’s a rising star since landing at the Thomas Keller Restaurant Group in 2009. After finding her calling at an early age by watching her mother cook, she went to culinary school in Philadelphia and gained experience working at restaurants around New York City. When she began as a pastry sous chef at Thomas Keller’s critically acclaimed Per Se—which was awarded three Michelin stars in the 2014 guide—she caught the attention of management and worked her way up to pastry chef at Bouchon Bakery at Time Warner Center. Her hard work paid off when she was recruited to help open the bakery’s Rockefeller Center location; in 2013, she was promoted to general manager and pastry chef, taking on the double responsibility of balancing overall operations and overseeing the pastry kitchen—a big job, but one Altieri wouldn’t trade for anything.

“I pride myself on creating baked goods that elevate the standard,” she says. “I enjoy surrounding myself with passionate hard-working people, and I love our organization and our high standards.”

When it came to developing a signature rum cocktail for The Modern, which holds four James Beard Foundation Awards and one Michelin star, Erin Jameson didn’t look to the trends; she stepped back in time. “My degree in history led me to the books,” she explains of her adaptation of an old punch recipe and Imperial Earl Grey tea.

Jameson has worked her way up from being a server, and now holds the coveted role of libations liaison—a job that requires her to not only develop specialty drinks but also step into the spotlight and offer expert insights on cocktail culture in New York. It’s a creatively challenging position, one that Jameson embraces by adding her own twists to recognizable flavors; she’s also not afraid to pull inspiration from The Modern’s next-door neighbor, the Museum of Modern Art.

“The recent Lygia Clark exhibit was an extraordinary opportunity to tie in a Brazilian spirit, cachaca, to the artist’s place of birth as well as work on a garnish that might remind guests a little of the work they saw upstairs,” she says. 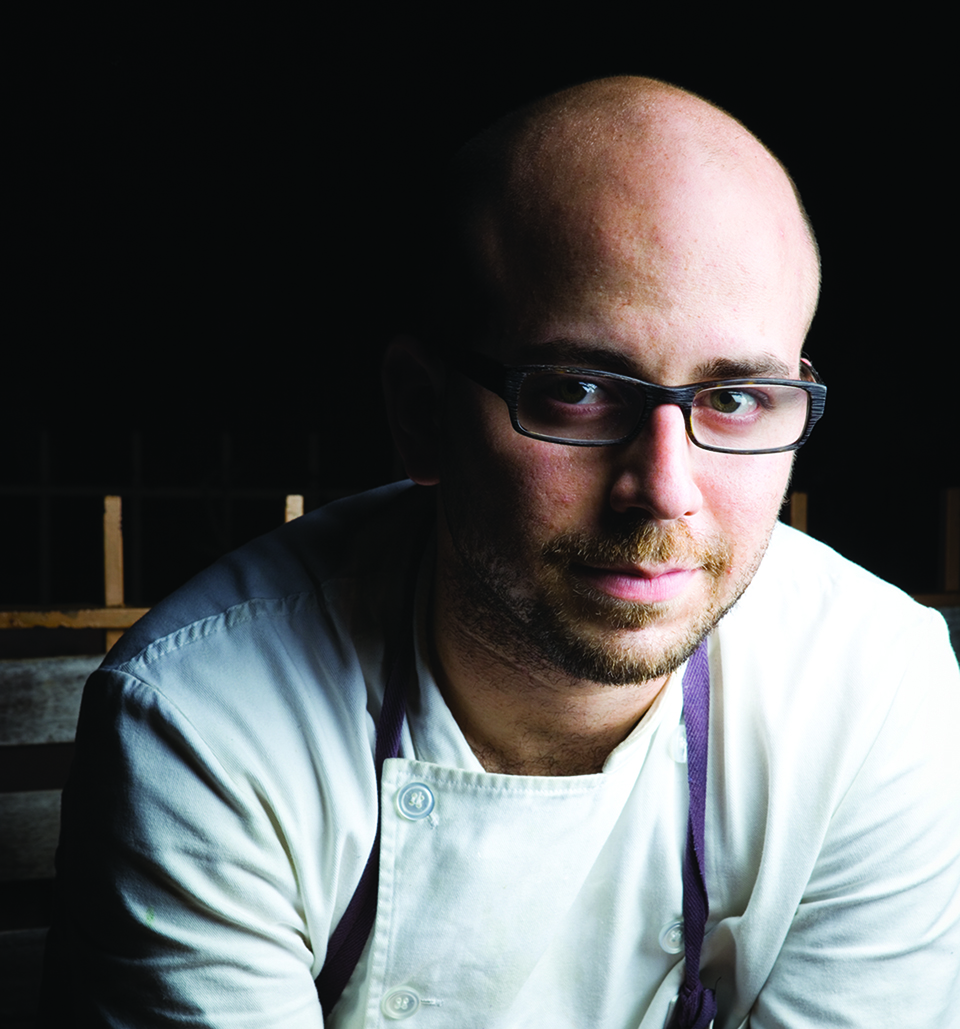 “The truth and beauty of cooking is that you will never reach a learning ceiling,” explains Jose Ramirez-Ruiz, who was mentored by former chef de cuisine Jonathan Benno during his stint at Per Se restaurant.

The rising star also previously received a prestigious grant from the James Beard Foundation to study in Spain; today, he couples that experience with innate curiosity at Chez Jose, a pop-up, reservation-only establishment in Brooklyn. The vegetarian-forward, prix-fixe menu is the epitome of the chef’s and his partner Pamela Yung’s shared desire to explore different facets of the culinary world.

“The idea that there could be so many things done with an egg or an onion baffled me,” he says. “I think it was that sense of discovery that inspired me to pursue this career.”
He’s currently getting ready to launch a new Brooklyn restaurant this fall called Semilla, which will also focus on vegetables—an important element of Ramirez-Ruiz’s cooking background.

“[My godmother] used to cook beautiful produce that was harvested daily from her backyard,” he explains. “There was something so special about it that … made a big impression on me as a child.”

Travis Swikard is the quintessential Daniel Boulud apprentice, having worked with the award-winning chef and restaurateur for a majority of his post-culinary school career. He began at Café Boulud as garde manger, working his way up the line to chef de partie (line cook) and then chef de tournant (sous chef).

He was handpicked to serve as executive sous chef at Boulud’s new Mediterranean restaurant, Daniel, in 2011; two years later, he became executive chef of Boulud Sud, where he places an emphasis on remaining focused, healthy and with a clear mind.

“It’s important to take care of yourself, in addition to your team, so that you can be the best possible leader and creator,” Swikard says. “I have always been the cook/chef to come in early, put my head down, knife to the cutting board and get to work.

“Every day is a learning process,” he continues. “I use all of my surroundings as inspiration, whether it is an egg or eggplant at the market, or an old cookbook.” 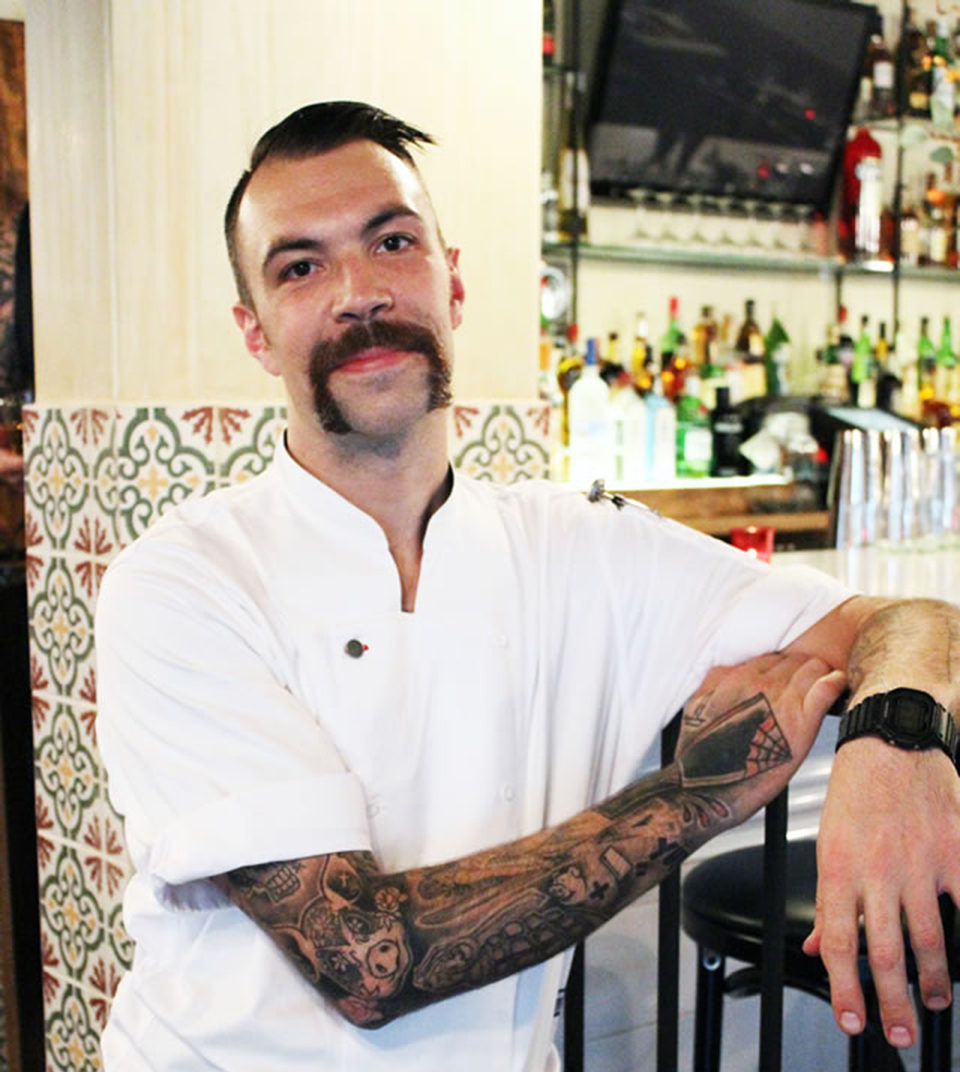 C.J. Bivona believes that simplicity is the key to quality cuisine. “My culinary creations stem from my love of scratch preparation and good ingredients,” explains Bivona, executive chef at the newly reopened Petaluma.

A staple on the Upper East Side, Petaluma underwent a massive transformation under Bivona’s culinary lead and now features two of his signature dishes: Nonna’s Fried Pasta, a spaghetti and meat sauce dish from his grandmother’s recipe, and whole broasted braciole, a loin of beef stuffed with herbs, cheese and, he adds, “love and goodness.”

Prior to overseeing the kitchen at Petaluma, Bivona worked with “Top Chef” contender Jeff McInnis at Miami’s Yardbird Southern Table & Bar, a 2012 James Beard Award semifinalist for best new restaurant. He teamed up with another McInnis apprentice, Amy Cunningham, after returning to New York to create the menu for the up-and-coming Brooklyn restaurant The Brew Inn.

“[New York] is my home, and it’s the hardest place in the world to make it,” he says. “However, it’s possible—and with the right people behind you, success is inevitable.”