Miami Artists on the Rise

A new class of Miami artists is causing a colorful stir in the art world.

They hail from a Miami that is unique in time and place, with the first years of Art Basel as their platform. The nation’s largest art fair, Art Basel Miami Beach, a sister exhibit to Switzerland’s famed festival, hosted 260 galleries from North America, Europe, Latin America, Asia and Africa last December. More than 2,000 artists from the last two centuries had work on view, attracting more than 50,000 visitors and ultimately doubling collective sales numbers from the prior year. It was also its 10th anniversary, a coming-of-age tale for the region’s cultural stamp and a sign of progression for this magic city. We take a look at what lies ahead in the next realm with five relevant Miami-bred artists who are set to take the world by form. 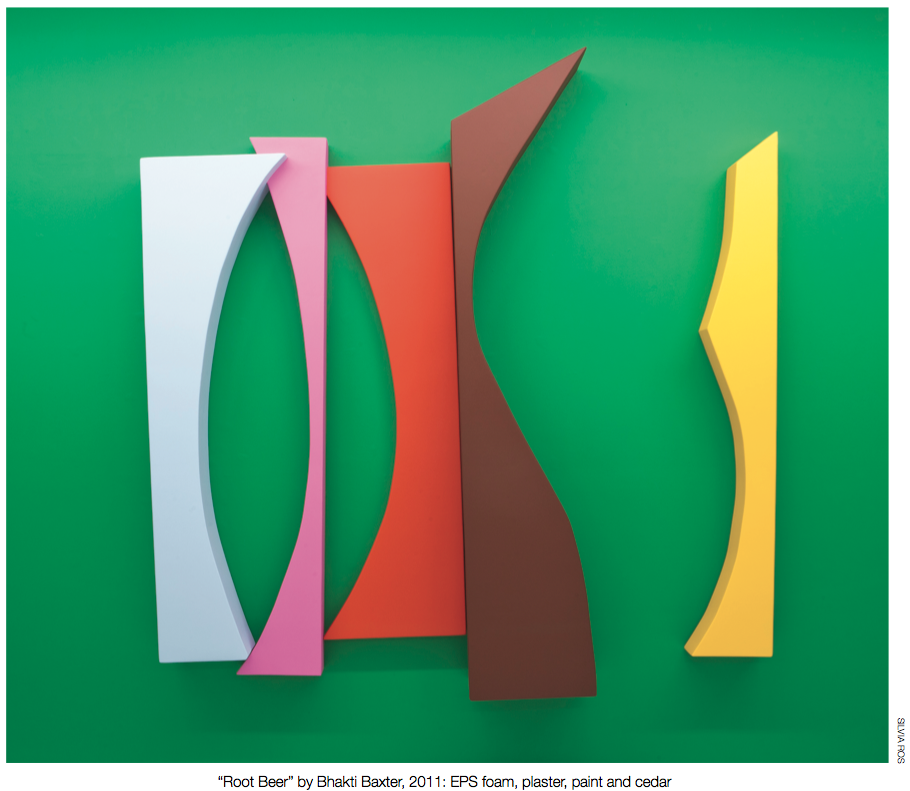 The 32-year-old Argentinean-American painter defines a rare breed of ever-evolving, working Miami artists who make the rest of the world pop its eyes open. “I would argue that it’s artists like Bhakti that make Miami’s worldwide cultural presence possible and interesting to an international audience,” says Nina Johnson, owner-director of Gallery Diet where Baxter held a solo show this past November. 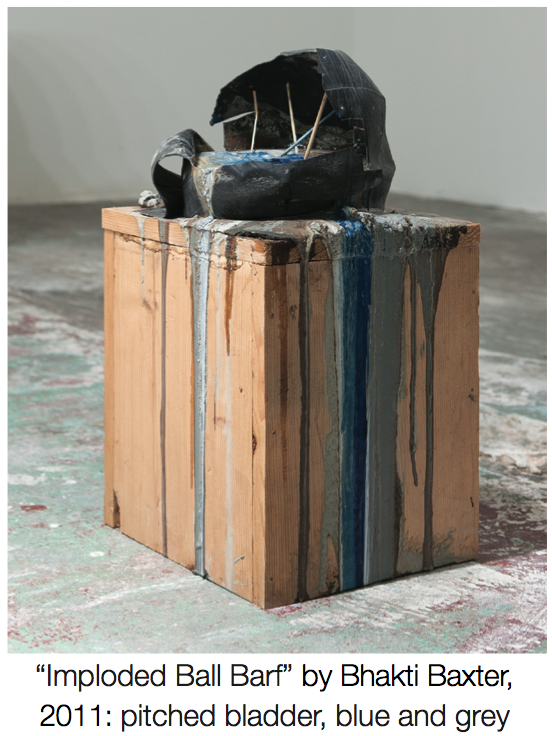 Credibility for his lyrical, motion-filled ink and oil paintings and installations began early in his career. Baxter began showing work after graduating Miami’s Design and Architecture Senior High School, and as a college student at the New World School of the Arts, he was tagged as a favorite of some top Miami museum curators. Baxter exhibited at the Museum of Contemporary Art in North Miami (MOCA) in 2001. Subsequent solo shows were held at the Galerie Perrotin in Paris in 2005, Fredric Snitzer Gallery in Miami in 2007, and Federica Schiavo Gallery in Rome in 2010. “Rompelotas was a huge success,” says Johnson of last year’s Gallery Diet show. “The works [revealed] a tremendous amount of growth and also allowed his audience to understand the free- flowing nature of his practice—from the range of media he chooses to the concepts and sources he draws inspiration from.

“There is no such thing as the ‘local’ in the 21st century; we need to know how to appreciate our im- mediate surroundings but also understand that there is only a global conversation,” Johnson says. The gal- lery recently published a 120-page retrospective book about Baxter’s work, which illustrates just how much the young artist has achieved over the last decade. 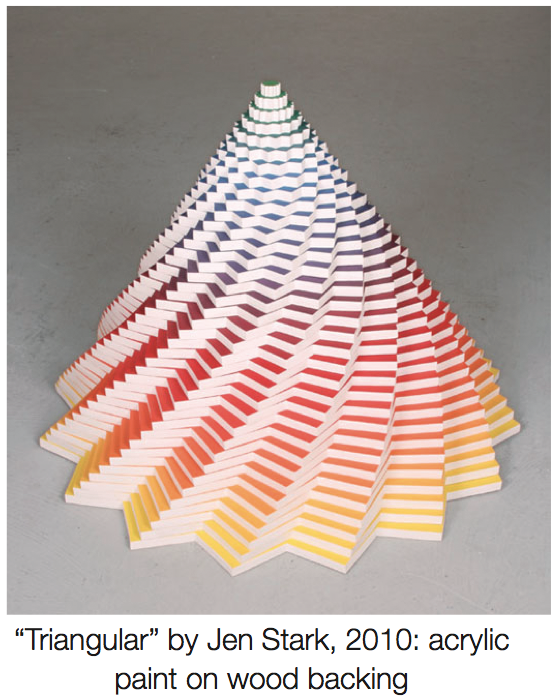 When Stark was spending her junior year at Maryland Institute College of Art in Aix-en- Provence in 2004, construction paper was one of the only things her student budget would allow. That was the beginning of a beautiful thing: In just eight years she has amassed a brightly hued, hypnotizing body of work and rainbow style that is often assumed to be the work of someone well beyond the age of 28. Her technique of slicing and gluing layers of colorful paper into shapes and sculptures conjure infinity, optical illusion, kaleidoscopic symmetry and positive energy. “Her work is spiritual. You can lose yourself in the work,” says gallerist Carol Jazzar. Recently, Stark’s psychedelic signature graced the outside walls of the Museum of Art Fort Lauderdale during Art Basel Miami, as well as the cover of the Harvard Business Review. Expect more from this Miami native, including motorized and light pieces and more stop-motion animation projects. 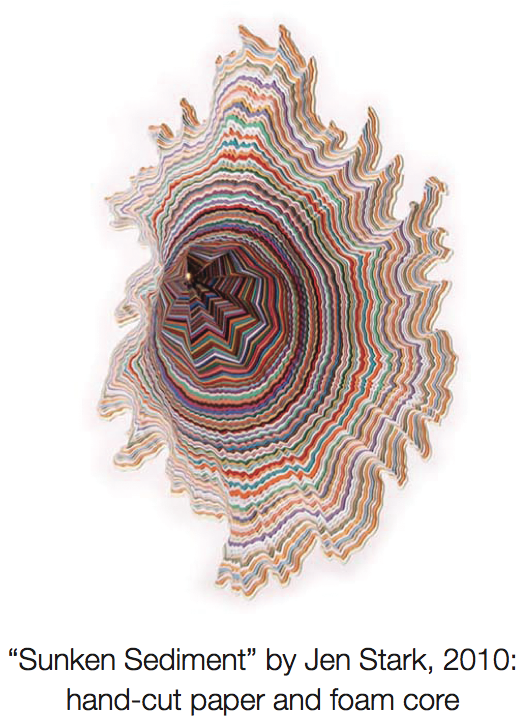 Bert Rodriguez’s clever take on conceptual art has charted his course of success outside state lines outside of his native Miami. He was named a Whitney Biennial artist in 2008, and recently gained representation by Los Angeles’ OHWOW Gallery. To prep for jumping into his narrative, think in humor, simplicity and pop culture. His works are full-body experiences that both artist and viewer partake in together: For example, his recent exhibit in Los Angeles was titled, “A Meal I Make with my Mother,” where he and his Cuban mother set up a kitchen in an art gallery and people who came to the show ate it; and his Biennial exhibit featured Rodriquez offering therapy sessions to people. 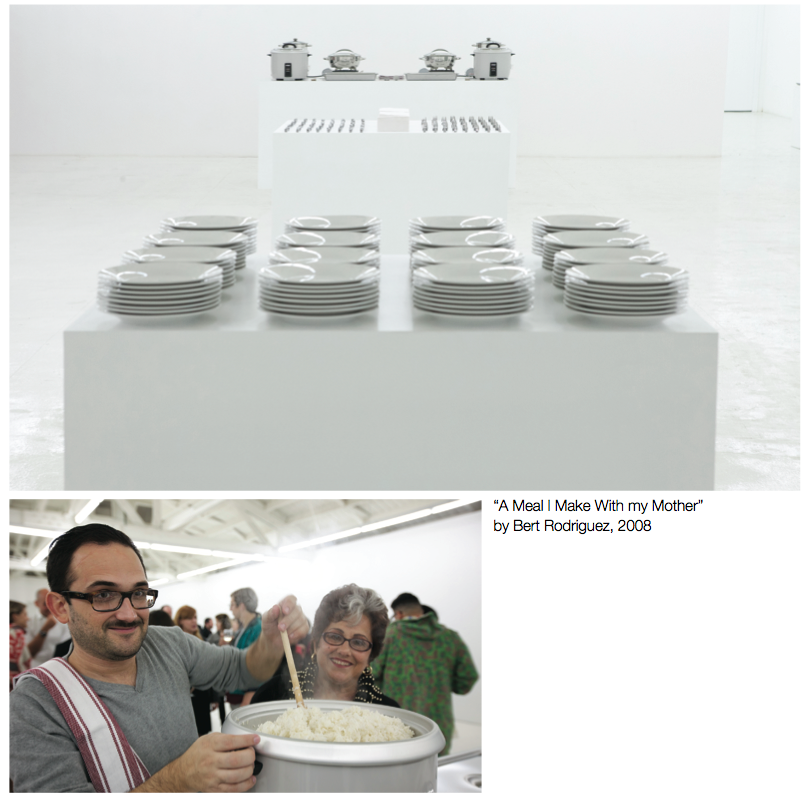 This 36-year-old prankster says no matter where he goes, he will always thrive in his hometown: “It’s the place I’ve always been able to do whatever I want without any pressure (subconscious or otherwise) to compromise on anything I’ve wanted to pursue with my work,” he explains. “The most contributing factor to my success being here was probably that it wasn’t New York or LA, or any other already culturally- defined city at the time that I began showing publicly. I stuck out like a sore thumb.” In attracting the attention of respected critics and curators along the way, Rodriguez has shown at Miami Art Museum, Bass Museum of Art, MOCA and the Bronx Museum of the Arts in New York. He received a Bachelor of Fine Arts from the New World School of the Arts in 1998, and has worked with Fredric Snitzer Gallery since 2001. He turned heads with a 2006 Art Basel Miami Beach performance, “A Bedtime Story Read by Bert Rodriguez,” a simple outdoor reading set against the lofty art fair. 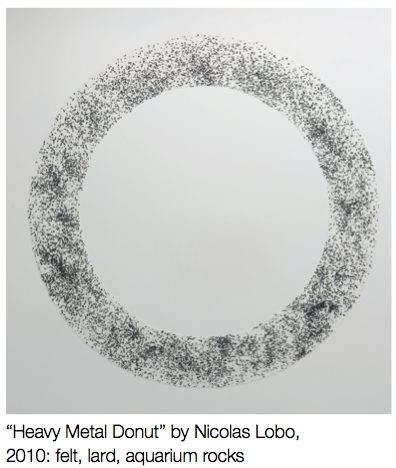 The buzz coming from Nick Lobo’s corner has grown louder in the last couple of years, as the 32-year-old multimedia artist continually crosses boundaries with his smart, challenging work using radio, sound, science, space and sculpture to tackle intangible modern subjects like media and aviation. Last year, his solo exhibition, “Limestoned,” at Miami’s Charest-Weinberg Gallery drew praises of success, followed by his first-ever exhibition at Art Basel. He finished the year with his first solo show in New York at Marlborough Chelsea: “Nicolas Lobo: Gum, Dropped,” where his microwaved CDs and marble and granite columns showcased his complex talent to the contemporary New York audience. A video reel showing grape cough syrup blasted through a fire extinguisher onto white walls, set to a slowed-down, 14-minute Justin Bieber track titled “Grape Syrup Action for Paul Octavian Nasca’s ‘U Smile 800% Slower,’” created quite a stir. Lobo began his education as a film student at the University of Miami and received his Bachelor of Fine Arts from The Cooper Union in 2004. He has exhibited at MOCA, Miami Art Museum, Bass Museum, NADA Art Fair and Art Basel Miami Beach. 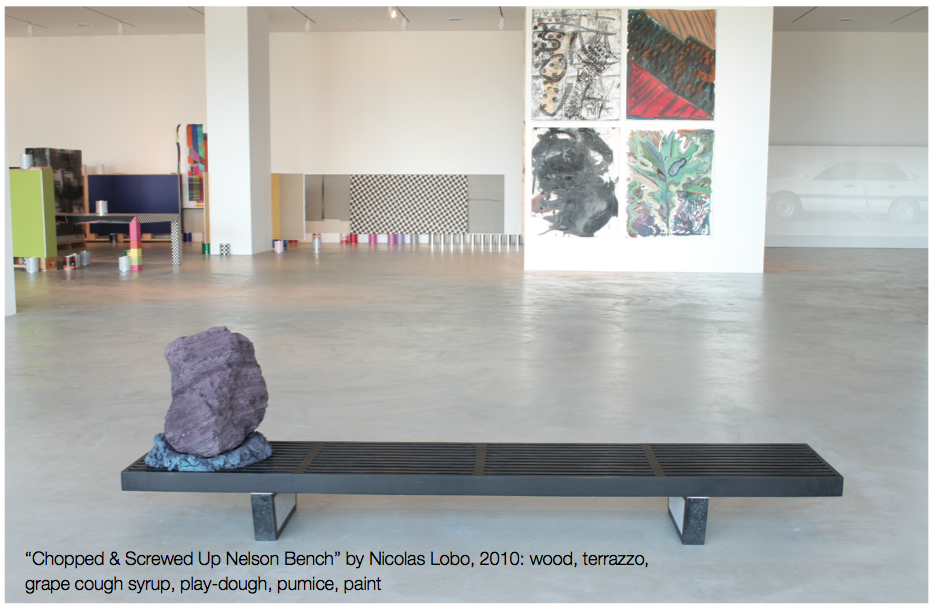 A tour de force of the Miami art movement for the past decade, Cuban-American artist George Sanchez-Calderon has an architectural approach to street art that is revered in his hometown. Case in point: His latest project is a sculpture park in downtown Miami that will include, among other things, Monument/Plinth/ Stoop—previously installed in Miami in 2007, and part of the 40th Anniversary of Public Art in New York City—cast in solid concrete “so when people stand on top of it they become part of the sculpture.” Though trained traditionally with a Master of Fine Arts from Rhode Island School of Design, Calderon has become known for building thought-provoking places to go for experiential commentary on modern life. Miami won’t forget his 80 percent scale installation of Le Corbusier’s 1920s modernist house, Villa Savoye, under the Interstate-395 overpass in Overtown, which remained in place from 2001 to 2003, nor his Midtown Midway Circus—two of his early defining Art Basel projects. 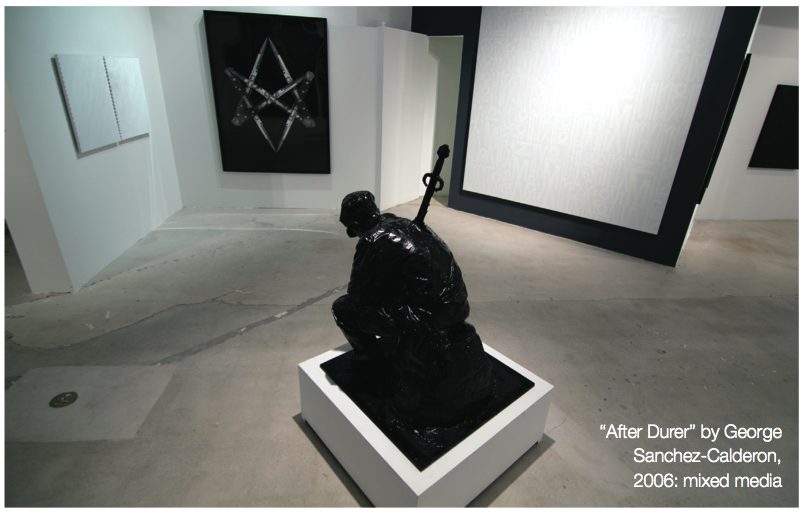 “George is an amazing artist with a mind that seems to go on infinitely,” says Typoe, the local street artist who curated the highly anticipated homegrown Primary Projects show “Here Lies Georges Wildenstein” during the 2011 Art Basel, which featured Calderon’s “After Durer.” Conceptualized from the 1525 design by Albrecht Durer and cast from a homeless man in Calderon’s neighborhood, “It’s one of the only homages I’ve done,” the artist remarks. He explains: “Because humanity doesn’t change. We still treat people in certain ways.” Up next, his narrative of globalization and life in the form of an old split-flap display railroad sign, which received much buzz when shown at Miami’s de la Cruz Collection and will continue making noise. “He is extremely important to Miami and the movement that has been here over the last couple of decades,” Typoe says. “Artists, curators and dealers all alike had nothing but great feedback on his pieces.”

What Baxter, Stark, Rodriguez, Lobo and Calderon share in their home turf is a balmy climate and their fingers on the trigger of a vibrant art scene with more international trajectory than the departure gate at Miami International Airport. South Florida is indeed developing into one of the most exciting places for contemporary art in the U.S. The smart set in the rest of the world is keeping a targeted eye on its youngest homegrown artists, lest they miss something huge.

Get a museum-grade dose of contemporary art on your shopping experience. With South Florida now a top winter destination for the international art population, thanks in part to the tropical climate and elite offerings, the area is appealing to a global audience more than ever before. Bal Harbor ups the ante in 2012, with highly curated, exclusive evening talks and art shows. Visitors and locals alike are thirsty for it, says Carolyn Travis, executive director for tourism in Bal Harbour. “Since Art Basel came 10 years ago, the art world has changed here,” she says. “We want to shine a light on what’s going on around us—the evolution of the arts.” This includes Art Chats with luminaries, Art Nights (which began last year) and installations that will feature Miami-based artists’ work as selected by global guest curators. “I always enjoy the opportunity to create something specific, especially for a context where art or my kind of creative output isn’t often seen or experienced there,” says artist Bert Rodriguez, whose Krystallos candy and sugar jewelry display at Saks Fifth Avenue was shown at one of the premiere Bal Harbour Art Nights in 2011. “My original idea was to invite a bunch of kids and have a bake sale in the middle of the store. The idea then evolved to making couture-looking jewelry out of candy and displaying it using all the elements already in use in the store.” Sound fun? That’s the idea. “I’d like to create an environment in which the artists can create the best possible work,” Travis says. “I want them to live in an environment where they can push themselves.” Art Night on March 29, 2012, features a talk by photographer-filmmaker Timothy Greenfield-Sanders and work by Colombian- born artist Sara Modiano. Launching in October 2012, a public art program features a six-month installation determined by a group of established local collectors and artists working with a guest curator, aimed to introduce even more Miami artists to the public sphere.

IN YOUR ZIP CODE

These up-and-coming artists are on a rapid ascent to international acclaim. Look for them in a contemporary art gallery near you: