For well over a century, New York City has summoned architects from all over the world to both work and garner artistic inspiration. The city is teeming with awe-inspiring architecture, which also help demonstrate its illustrious past. One of the first buildings erected in Manhattan was the Fraunces Tavern; built as a house in 1719, the venue became a tavern in 1762 and has essentially remained so ever since. In 1890 the city got its first skyscraper, which housed a newspaper, in the form of the New York World Building; also known as the Pulitzer Building, this was the first structure built higher than the spire on the city’s Trinity Church.

And the story continues to unravel: One of the latest masterpieces can be found downtown, where One World Trade Center pays homage to the iconic structure that preceded it. Whether you appreciate towering skyscrapers, modern museums or historical houses, New York City has it all. Though there are many great stories and architectural destinations to choose from, visits to these five landmarks offer a comprehensive view of the framework—and history—of the Big Apple.

Given the building’s notoriety as a transportation hub for city slickers, it’s hard to believe that the Grand Central Terminal as we know it has been around since 1913. The original structure, constructed in 1871, was known as Grand Central Depot before it was renovated and expanded. With an estimated 750,000 people visiting the terminal each day, not only does this edifice accomodate city dwellers, it also acts as a meeting spot, shopping center, dining destination and event space. And yet, it was almost destroyed. In the mid-1970s there were plans to demolish the architectural gem, as was previously done to the old Pennsylvania Station in 1963. Thanks to the conservationists and the influence of Jacqueline Kennedy Onassis, the terminal persevered. Today guests and commuters alike may take in the historic 13-foot Tiffany clock that hangs above the entrance before wandering inside to marvel at the vaulted ceiling’s famous zodiac constellations painting by French artist Paul Helleu.

The original Grand Central Terminal building was designed by the architectural firms Reed & Stem and Warren & Wetmore. Within the tiered concourse you will see Tennessee marble flooring, Botticino marble in the decorative trim and imitation Caen stone walls. And the magnificent details don’t end there: Visitors will also discover bronze and stone carvings and awe-inspiring chandeliers. And, of course, a must-see destination is the Grand Central Oyster Bar and Restaurant, one of the oldest restaurants in the city that not only offers a unique setting and tasty bivalves, but also some of New York’s best people-watching.

When you see the one-of-a-kind spiraling edifice that houses New York City’s Solomon R. Guggenheim Museum, it’s easy to understand how this building—one of many that house the city’s art collections—became so notable. Built in 1959, it was designed by renowned architect Frank Lloyd Wright and is said to be the most significant project of the later end of his career. The Solomon R. Guggenheim Foundation had tasked Wright in 1943 with the creation of a space for its Museum of Non-Objective Painting (established in 1939) and the artist accepted. Little did Wright know that it would take more than 15 years, six sets of plans and over 700 sketches before the building would come to fruition. In the design, Wright wanted to create a “temple of spirit,” as he was instructed by Hilla Rebay, the museum’s director and curator of the foundation during that time.

Once you step inside the Guggenheim, the feeling of otherworldliness indeed exudes from the inverted structure and endless ascending ramps which seem to lead visitors skyward. This unique floor plan complements the art that the structure contains, as the gallery can be experienced in one long, continuous path. Here, visitors can see intimate modern art showings. Guests also have the benefit of experiencing the structure’s expansion and renovations, which began in the 1990s when an eight-story tower was added and major interior changes were completed in the iconic structure. 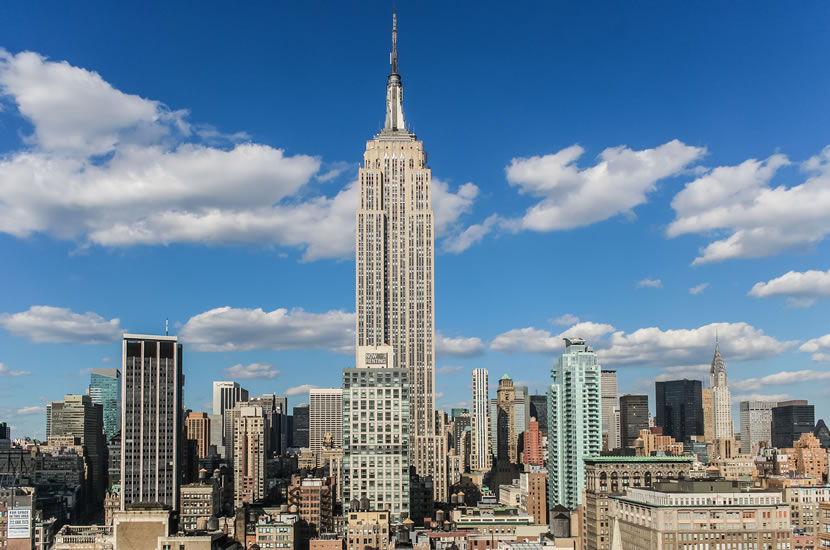 The Empire State Building is easily one of the most recognizable skyscrapers in the world. After all, it’s the one King Kong climbed in the 1933 film with a screaming Fay Wray in his fist, and it has been featured in numerous other blockbusters since its official opening in 1931. When the ribbon was cut, the building, which boasts 102 floors, became the world’s tallest man-made structure; today, roughly 20 buildings worldwide have surpassed its height.

The Empire State Building’s design comes thanks to architects at Shreve, Lamb & Harmon Associates, who not only made this iconic figure what it is, but were also able to raise the building by an impressive four-and-a-half-stories per week during construction. In 2006, it celebrated its 75th anniversary and its ownership announced major plans for the Empire State ReBuilding initiative, which included complete interior renovations as well as a groundbreaking objective of making the building more energy-efficient. Today, the art deco lobby’s recreation of the original gold and aluminimum ceiling remains a highlight.

While the inside of the building leaves viewers gawking, its exterior proves just as remarkable. Every day the skyscraper’s crown changes color, a special effect courtesy of the LED light system implemented in 2012, which is capable of emitting 16 million different colors. The building chooses color schemes with significant or timely meanings. For example, silver and red in honor of the Tony Awards and green for Earth Day. And while the Empire State Building remains an architectural masterpiece in itself, with the 86th and 102nd floor observatories offering 360-degree views, it also affords visitors the ability to see another equally stunning sight: New York City from above.

Towering at over 1,000 feet, when this skyscraper was completed in 1930 it was the world’s tallest. Unfortunately, that title was short-lived, with the compleition of the Empire State Building one year later. But that hasn’t made this famous structure any less marvelous or deserving of its registration as a National Historic Landmark.

Modern visitors can still see the glittering art deco details put in by architect William Van Alen. This includes the stainless steel crown featuring shiny gargoyles in the shape of American eagles, and sunbursts rising in layers, which have the unique aspect of giving some of the floors triangular vaulted windows. Also on display are the aspects that came from its namesake, Chrysler automobiles, which include radiator caps along the lower setbacks and the ornamentations found on the car’s wheels. While the Chrysler Corporation did have offices in the building until the 1950s, Walter P. Chrysler paid out of pocket for its construction, leaving the deed to his heirs instead of the company.

Today, the 77-floor building boasts more than 2 million rentable square feet, and it’s leased by a diverse array of tenants across many industries. It’s also reconized for being certified LEED Gold for Existing Buildings by the U.S. Green Building Council. All its inhabitantas may enjoy the 360-degree views of Manhattan—including the East River and Central Park—and its surrounding neighborhoods, as well as the building’s historically renovated lobby and elevators, and direct access to Grand Central Terminal.

Most people know this Beaux-Arts landmark as The New York Public Library, instantly recognizable thanks, in part, to Patience and Fortitude—the duo of famous marble lions that stand sentry in front of the building. Located on Fifth Avenue and 42nd Street, the Stephen A. Schwarzman Building became what it is today due to the melding of two prominent but failing institutions: the Astor and Lenox libraries. In an effort to preserve their treasures and still maintain the public libraries, the two venues joined with the Tilden Trust—of prominent one-time governor Samuel J. Tilden—to create The New York Public Library, of which the first cornerstone was laid in November 1902. Dr. John Shaw Billings, who was a renowned librarian, helped design the building with the architecture firm Carrère & Hastings. For the official dedication of the library nearly a decade later, more than 1 million books were brought inside in the building.

Today, the Stephen A. Schwarzman Building is part of The New York Public Library’s four major research libraries, though it’s widely considered to be the main branch. More than 17 million people visit the National Historic Landmark each year; researchers flock to the miles of shelves and visitors can wander the halls and marvel at rooms such as the unparalelled Rose Main Reading Room, which boasts 42 oak tables on marble bases. Of course, there is also Stephen A. Schwarzman Building’s exceptional collection of some 15 million tomes and other items ranging from ancient Japanese scrolls to baseball cards, contemporary novels and medieval manuscripts.