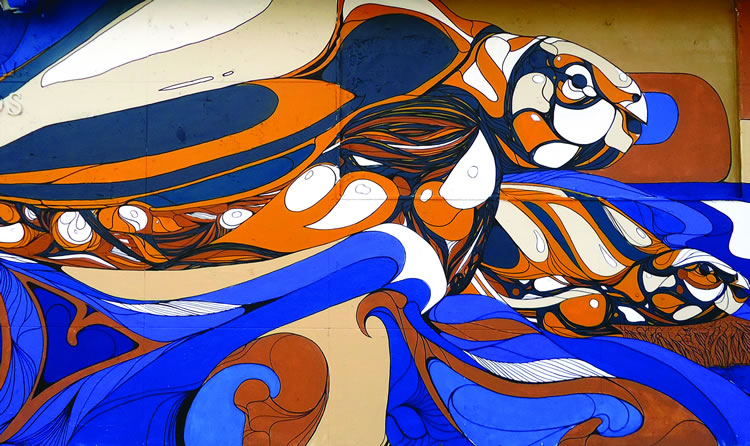 Known as San Juan’s “Avenue of the Arts,” Ponce de Leon Avenue is lined with museums, galleries, theaters and cafes in the heart of Santurce’s art district—considered the highest concentration of arts and cultural venues in the Caribbean. Locals and visitors alike come to the district to enjoy exhibits, festivals and concerts, while also soaking up the art deco architecture and murals adorning the sides of buildings.

“Anyone who knows anything about San Juan will visit Santurce for an authentic Puerto Rican experience,” says Richard Holm, a Santurce resident and local historian.

More and more artists have moved into the district in the past 10 to 15 years, bringing creative energy and transforming Santurce into the cultural hot spot that it is today, revitalizing this once rundown area into a destination reminiscent of its glamour-filled history.

In the first half of the 20th century, this area was the island’s primary core of culture and commerce.
“From the [late 1930s to the 1960s], Old San Juan was rundown and Santurce was happening. It was where you went to see movies, shop and do business,” explains Aníbal Sepúlveda Rivera, a historian and professor at the University of Puerto Rico.

A tram system, installed in 1900 along Ponce de Leon Avenue, helped bring traffic to the area. It ran from Old San Juan through Santurce and beyond, making transportation efficient and affordable, with “paradas” (stops) numbered from one to 40. Though the tram hasn’t operated in more than 60 years, locals still refer to the numbers when giving directions—for example, the Museum of Art of Puerto Rico is at Parada 22. 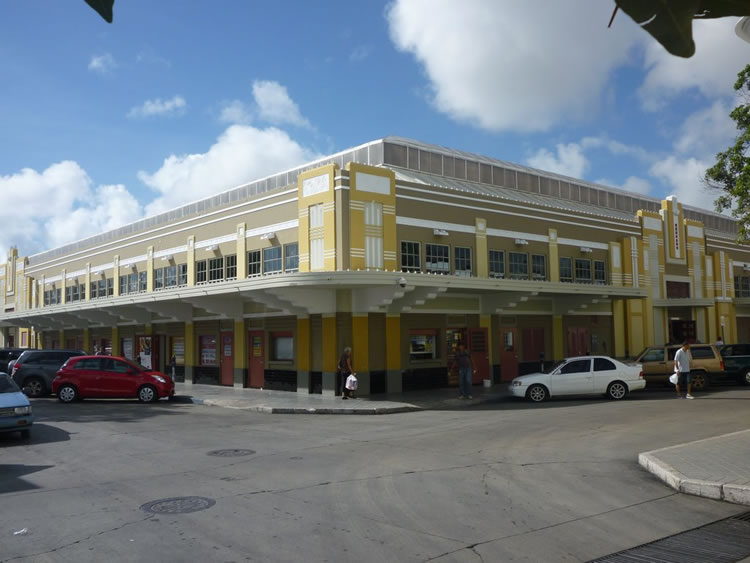 Not far from the museum is Plaza del Mercado, the social heart and soul of Santurce since it was constructed in the early 20th century. It remains a popular destination for residents to buy fresh produce and meats at the farmers market or have a lunch at one of the alfresco cantinas or cafes such as El Popular or Boronía Restaurante.

Strolling around this area, it’s easy to imagine Santurce in its heyday, when the main thoroughfare—Ponce de Leon Avenue—was as lively as Fifth Avenue in New York City. Ornate buildings lined the streets, featuring grand movie theaters, high-end shops and chic supper clubs. But all of that glitz and glamour eventually began to fade away, with two unrelated circumstances contributing to the demise, according to Holm.

On the U.S. mainland, the 1950s ushered in the golden age of television. For Puerto Rico, TV became mainstream nearly 20 years later. As locals enjoyed entertainment in the comfort of their homes, theaters began to close.

In the late 1960s, in order to save Old San Juan’s 16th-century buildings from being bulldozed and replaced with high-rises, a new business district was constructed in Hato Rey, just south of Santurce. Known as the “Golden Mile” today, first the financial sector relocated there and then, with the opening of Plaza Las Americas—the largest mall in the Caribbean—the retail sector followed.

When those businesses relocated to Hato Rey, Santurce emptied out and became an impoverished district. “For a period of more than 20 years, Santurce was completely abandoned,” Holm says. “When I first moved to San Juan 15 years ago, my Puerto Rican friends warned me not to even step foot in the neighborhood.”

Slowly, though, artists started moving into the area due to the inexpensive real estate. Little by little, the district began to shine again.

It wasn’t until the Museum of Art of Puerto Rico (MAPR) opened in 2000 in the heart of Santurce that the fates began to shift for the struggling community. Emboldened by the precedent set by one of the largest museums in the Caribbean, others soon followed suit. Founded in 1984, the Museum of Contemporary Art of Puerto Rico relocated in 2002 within walking distance of MAPR, which, notably, incorporates a former San Juan Municipal Hospital building in an effort to preserve Puerto Rican architecture. 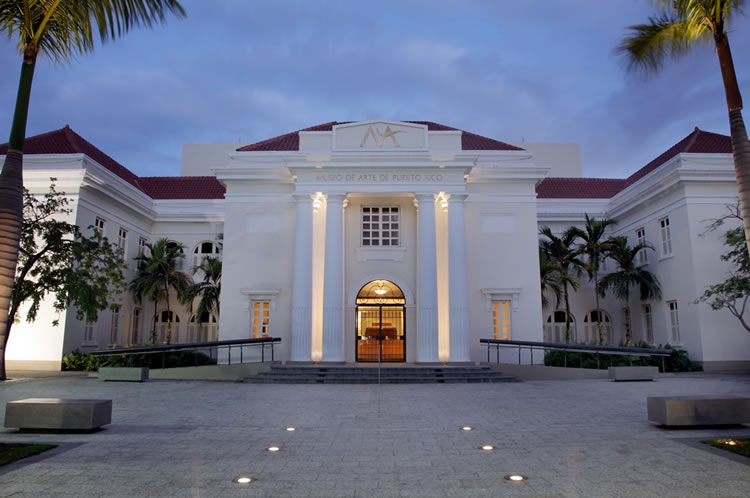 A few years later, other galleries opened nearby, including Petrus Gallery and Espacio 1414, with the rainbow-colored garage door. Petrus Gallery is now a major player in Santurce’s art district, representing many Puerto Rican artists across a vast array of mediums, from painting and sculpture to graffiti. Meanwhile, Catorce-Catorce—which translates to 14-14 and is the local nickname for Espacio 1414—is a by-appointment exhibition space in a former Royal Tire warehouse showcasing the private collection of Diana and Moisés Berezdivin. Originally from Cuba, the Berezdivins are avid art collectors and substantial supporters of the island’s visual arts.

Like adding wood to a fire, the creative blaze continued to brighten as more influential galleries opened their doors. Roberto Paradise, located in a wooden mansion built in 1903 and painted lime green, has a strong presence among international art fairs and an impressive roster of both global and local artists.

A few blocks away is C787 Studios, run by mixed-media artist Angel Alexis Bousquet, who has been key in championing the creative force in this community. C787 Studios has presented more than 40 exhibitions and showcased over 200 artists since it opened in 2009. These galleries have contributed to the district’s revitalization, which Bousquet says is rooted in a movement by local residents.

“I don’t call what’s happening here gentrification,” he says. “We’re not moving anyone out. I call it localization—the people living here are changing it from within.”

According to Bousquet, the work is paying off and the international art world is starting to take notice. For example, Art Basel Miami Beach has invited Santurce artists to paint murals for the festival for the past couple of years. Plus, there’s an infusion of art collectors flocking to the area in search of undiscovered prodigies.

Agustina Ferreyra, former director of Espacio 1414, can attest to the healthy art collector base that supports the exploding gallery growth.

“The ratio of collectors in Puerto Rico compared to other cities is really, really high,” Ferreyra says. “[It’s a range] from young entrepreneurs to American business owners [who] have moved here for the tax breaks to longtime art enthusiasts.”

In 2012, she opened one of the area’s newest galleries: Galería Agustina Ferreyra. “I really thought about opening in Old San Juan, but that’s not my audience,” she says. “I’m seeking people that are passionate about art, whether they buy or not, and that’s here.”

This summer, Galería Agustina Ferreyra, with a roster of both local and international artists, will mount a solo show of New York painter Zak Prekop, followed by the Puerto Rican fine art photographer José “Tony” Cruz in the fall.

Over the past several years, while the commercial and institutional art landscape was steadily garnering attention and prestige, the area’s graffiti art was still considered underground and undesirable.

“It was pretty … illegal up until recently,” says Gerardo Cloquell, a 32-year-old renowned Puerto Rican muralist and street artist. “Police were after graffiti artists, always buffing the walls.” Cloquell says that, since the recession hit, residents and government officials have been changing their views as they prefer to see some kind of art rather than an abandoned building in disrepair. 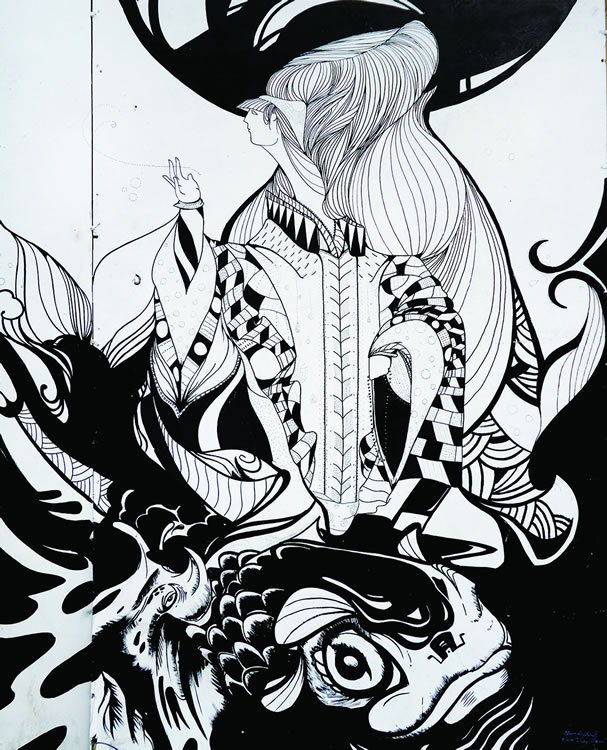 The shift in local public opinion about urban art is partly due to the international recognition of street artists such as Banksy and Shepard Fairey, in addition to the Santurce es Ley (Santurce is Law) art fair. Founded by Bousquet of C787 Studios, Santurce es Ley has played a crucial role in bridging the gap between emerging local artists and the international art community. The art fair, held annually in March, features galleries that stay open until midnight, pop-up galleries, artist studio tours, live mural demonstrations and music.

Since its inception in 2010, the fair has mushroomed from a modest get-together to an international art event. “Six hundred people went to the first one,” Bousquet says. “Now, Santurce es Ley lasts three days and over 9,000 showed up from all the over the world.”

The business community is also embracing street art. Corporations commission artist collectives, such as CoroGráfico, of which Cloquell is a part, to paint murals on their exterior walls for holidays or festivals. That artwork, Cloquell says, helps to brighten up the area and make it a vibrant place.

“Art changes people,” Cloquell explains. “I’m not saying what I do is the hope of the world. I paint not just because I love it, but to better the area, even if it’s just a little.”

Finding street art in Santurce isn’t difficult—it appears on lampposts, benches and even storefronts. “There’s so many amazing murals and [so much] graffiti writing … in Santurce, it’s like a museum outside,” Cloquell says.

To view work by some of the most famous artists, such as La Pandilla—the combined efforts of Juan Fernandez and Alexis Diaz—Rey X or Pun18, Cloquell recommends a few key areas for large murals: José de Diego Avenue, Calle Del Parque and Sagrado Corazón train station.

Also near the train station and worth a visit is University of the Sacred Heart (known in Spanish as Universidad de Sagrado Corazón), which was established in 1880, making it the oldest private educational institution on the island. The main administration building, portico and chapel, all listed on the National Register of Historic Places, represent a mix of architectural styles from French neoclassical to Victorian.

In places like Santurce, where creativity is fostered—from murals to galleries and preserved architecture—beautification abounds. Although the district has a long way to go to return it to its glory days, it’s a prime example of Cloquell’s theory: Art imbues a place and its residents with hope for better things to come. And visitors can view this renaissance as it unfolds. Whether seeking an authentically Puerto Rican encounter, historical architecture or edgy modern art, Santurce is a fascinatingly diverse neighborhood to explore.

Please note: When visiting the galleries mentioned in this article, call ahead as many do not keep regular business hours or are open by appointment only.

When exploring the district, these “Avenue of the Arts” mainstays are not to be missed.

Located on Ponce de Leon Avenue in Santurce, the Centro de Bellas Artes de Luis A. Ferré (Luis A. Ferré Performing Arts Center) is the island’s premier destination for live shows and the largest venue of its kind in the Caribbean Performances include both local and international ballet, plays, operas and concerts. Home to the Puerto Rico Symphony Orchestra, the center also hosts the Festival Casals, a classical music festival held annually in February in honor of classical musician Pablo Casals. (787-620-4444; cba.gobierno.pr) 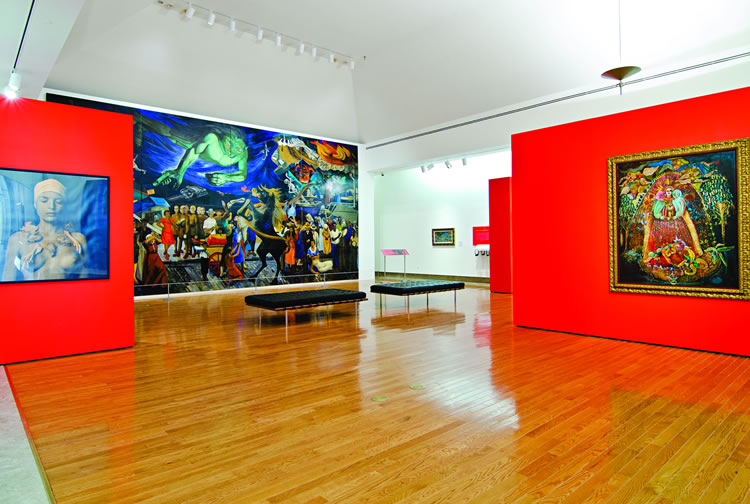 An exhibit at the Museum of Art of Puerto Rico, which features artwork from the 17th century to the present (Courtesy of Museo de Arte de Puerto Rico)

Museum of Art of Puerto Rico

Formerly the San Juan Municipal Hospital—built in the 1920s—the Museo de Arte de Puerto Rico (Museum of Art of Puerto Rico; MAPR) is a 130,000-square-foot space of sleek sophistication. In addition to exhibiting artwork from the 17th century to the present, including pieces by famous Puerto Rican artists, MAPR regularly hosts concerts and workshops. Don’t miss a stop at the garden, a peaceful respite dotted with intriguing sculptures, or the museum’s restaurant, Laurel, which showcases celebrity chef Mario Pagán’s modern Caribbean cuisine. (787-977-6277; mapr.org)

The two-story Museo de Arte Contemporáneo de Puerto Rico (Museum of Contemporary Art of Puerto Rico; MAC), is housed in a former school built in 1918 with Georgian-styled architecture. This museum is dedicated solely to championing Latin American and Caribbean artists (both established and up-and-comers) from the mid-20th century. (787-977-4030)