Meet the culinary masterminds behind the delectable dishes on the St. Regis menus.- By Valerie Westen Furr 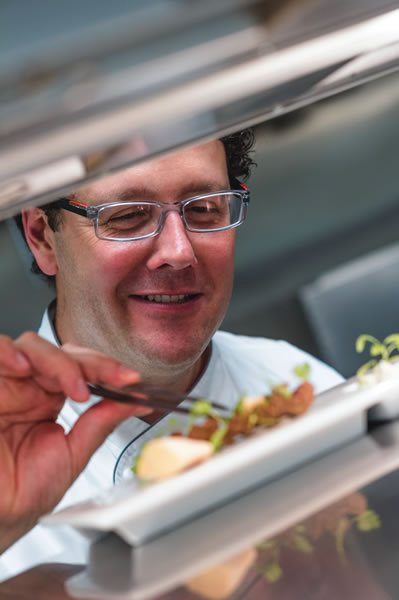 Open for less than a year, The St. Regis Bal Harbour Resort has already met the high expectations of its exclusive destination. The singular services and amenities offered at this elegant location have set the bar, matched effortlessly by the quality and refinement of the dishes served in the resort’s restaurants.

Many men and women work passionately behind the scenes to create dishes that are made to enhance the overall St. Regis experience. Two of these dedicated professionals are Executive Chef Jordi Valles and Executive Pastry Chef Antonio Bachour. Along with a team of culinary experts, including J&G Grill’s chef de cuisine Richard Gras, these two chefs are the driving force behind the amazing creations that can be found on The St. Regis Bal Harbour Resort’s menus.

Involved with the resort since day one, Valles worked tirelessly in the months before the grand opening to structure the kitchen, recruit chefs and design exciting new dishes. The decision was made to hire an amazing pastry chef to work alongside his team in the gourmet kitchen, and according to Valles, Bachour’s reputation preceded him. “Bachour stood out from all the other candidates,” Valles says.

Bachour was up for the challenge and the duo of chefs began their endeavour to create amazing culinary experiences for the future St. Regis guests.

Valles was born and raised in Barcelona, a well-known destination in the culinary world, where his family instilled the love of food in him at a young age. He describes his parents as “food lovers” who often took him to fine restaurants even as a child, but his biggest influence was his grandmother, to whom he credits his love for traditional dishes. 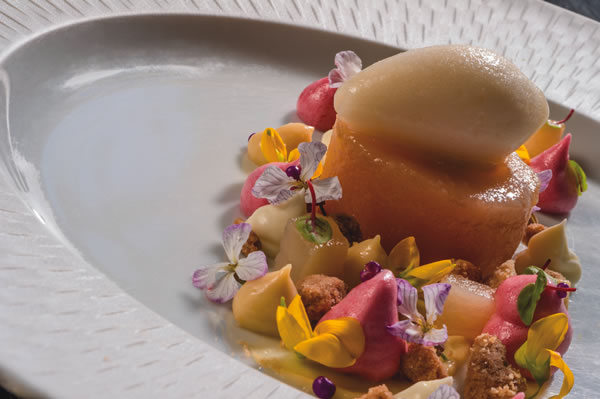 “I saw how much care and time she put in cooking. She is the one who educated my palate,” he says. “When I create dishes, I want to keep remembering that time, the tradition.”

Growing up, he went to his grandmother’s for lunch twice a week and observed as she created delicious meals with flavors that have stayed with him to this day. Valles believes that the aromas experienced in the first 12 years of life stay with us, and his grandmother’s food has had a definite influence on his creations.

Meanwhile, thousands of miles away, Bachour was discovering a passion for the sweeter side of food. Like Valles, Bachour’s family helped mold him as a chef. His parents owned a bakery in Puerto Rico and he remembers watching his mother making napoleons, cheesecakes and other treats.

“I was fascinated,” he says. “She was always in the kitchen baking.”

Interestingly, his mother did not allow men in the kitchen. Bachour recalls that she used to “kick the men out,” saying that it was a place only for women. Yet, her influence was so strong that it determined his calling. 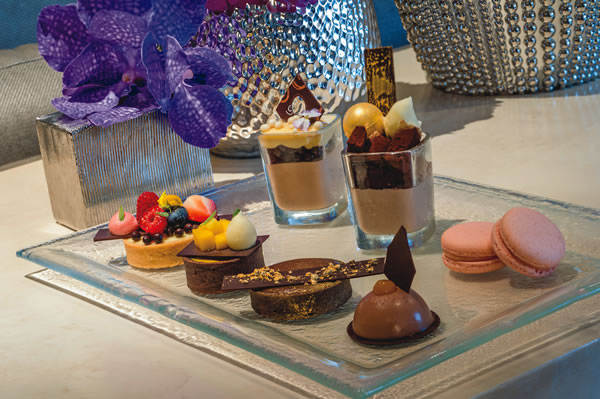 The Long Road to Miami Beach

The decision to become a chef was a surprise for both Valles and Bachour’s families. All of the men in Valles’ family are lawyers, so his career choice was initially a surprise to his father. The same scenario unfolded in Bachour’s family, where the chef’s seven brothers decided to follow more “conventional” paths while he pursued his dream to follow in his mother’s footsteps.

Valles studied hotel management at the Escola d’Hostaleria Sant Ignasi in Barcelona before focusing his efforts on becoming a chef. During his studies, he interned in different restaurants throughout France in cities such as Strasbourg, Marseille and Bordeaux, developing in him a healthy respect for French cuisine that he still embraces today. He left his native Spain to work as an executive chef at a luxury hotel in Cancún, Mexico, and later as a consultant for Latin American restaurants in China. He eventually made his way to Florida in 2001, where he worked for another five-star hotel in Key Biscayne until joining the St. Regis prior to its opening in January 2012. Valles’ resume is extensive, but he remains humble and says he is not interested in cooking competitions, preferring to focus on his kitchen. One of his biggest influences in the culinary world was elBulli, a world-renowned restaurant in Spain made popular by the creativity and innovations of its chef, Ferran Adrià.

Bachour also looks up to Spanish chefs. Mastering chocolate confections is a must for Bachour, and the award-winning chocolatier from Barcelona, Ramon Morató, has been a main influence for him. Jordi Butrón, pastry chef and founder of Espaisucre restaurant and pastry school, is also a big inspiration.

“I’ve had the chance to meet Butrón and try his desserts and they were amazing—modern with a mix of savory and sweet,” Bachour says.

Unlike his Spanish counterparts, Bachour studied in Miami, where he attended the culinary school at Johnson & Wales, and France at l’École du Grand Chocolat, Tain L’Hermitage. He returns to France once a year to learn new techniques and chocolate innovations that he brings back and incorporates in his sweet creations. Before joining the St. Regis team, he worked for several big name hotels and restaurants, including luxury properties in San Juan, Puerto Rico and New York, as well as the Scarpetta restaurants in New York and Miami, to name a few. Bachour was recently honored with the plated dessert award in 2011 at the International Chef Congress and was selected by Dessert Professional Magazine as one of the top 10 pastry chefs in America that same year. 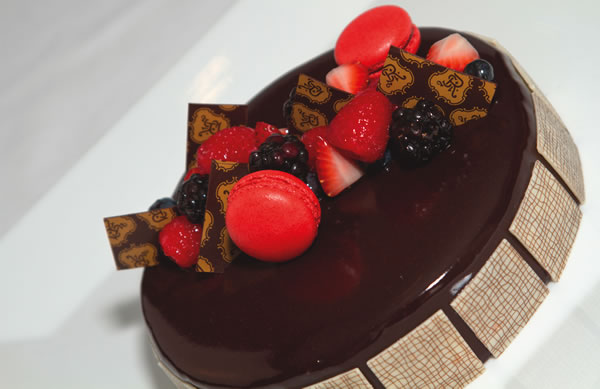 Both chefs will agree: They do not bring their work home. Bachour says that although he has all of the equipment needed in his personal kitchen, he rarely uses them. Besides a few lychee or Greek yogurt-flavored dishes, he stays away from sweets, choosing to focus his passion for desserts on the palates of the St. Regis guests. Similarly, Valles admits that he hangs his chef’s coat when he goes home, where he and his wife “cook simple.”

The St. Regis Bal Harbour Resort is the chefs’ playground, where they can unleash their culinary creativity and design delectable, flavorful dishes for all to enjoy. The resort’s menus are seasonal, changing four times a year. It takes the chefs much research to decide what will be put on their guests’ plates, and Valles says that planning is fundamental. He works directly with vendors to select foods that are naturally grown.

“The menu selections will often depend on what is produced in the season and we really like to support local farmers and artisans,” he explains, adding that some items must also be imported. “I am a fanatic for truffles, which we get from Alba, Italy and Périgord, France.” 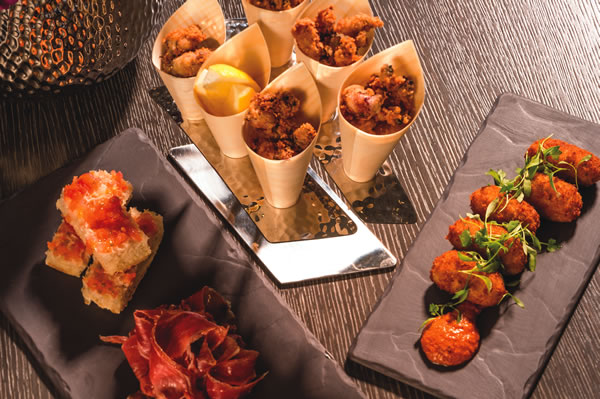 Bachour is also hands-on when designing his desserts for the seasonal menus and often waits until a couple of weeks before its debut to finalize and perfect the dishes. On the winter dessert list, guests can expect to find citrus flavors such as blood orange, kumquat and Meyer lemon, as well as other tropical fruit aromas paying homage to the Florida locale. Some year-round treats will still be available, including the colorful and flavorful macarons and chocolate bonbons, which, like all the other desserts at the St. Regis, are handmade under Bachour’s watchful eye.

As executive chef, Valles relies on his passionate team to help him bring the best cuisine to The St. Regis Bal Harbour Resort. Having pastry chef Bachour and the rest of his team alongside him in the kitchen since the opening of the resort has made a difference in creating the best culinary experiences for their guests.

“Doing an opening for the St. Regis, you set a standard from the beginning and feel comfortable because things are the way you planned and should be,” Valles says. “And you feel appreciated when you do a job that you love.”

He takes into consideration the feedback from his guests, studying how they react to the dishes, ensuring that their satisfaction is a priority. Bachour embraces the same vision and strives to exceed expectations and pursue culinary perfection, whether it is a one-of-a-kind small plated dessert creation, a colorful and artistic buffet of sweet treats or a wedding cake.

Both men value the other’s skills and cooperation in the kitchen.

“Chef Bachour is enthusiastic about what he does,” Valles says. “He has a very unique presentation. I can give him a direction and he elaborates from there.”

Bachour shows the same esteem and respect for Valles: “I am very happy to work with him,” he says. “He gives me the freedom to create whatever I want. He is very detail-oriented and wants everything perfect, but also has an open mind.”

The two chefs and their team are dedicated to always satisfying their guests’ requests and expectations, whether they are savory or sweet. Together, they work continuously to design new creations that are innovative and flavorful.

“We are some of the best at what we do in the culinary world and work for the best establishment,” Bachour says.