No request is too large or small for The St. Regis Bahia Beach Resort concierge team. 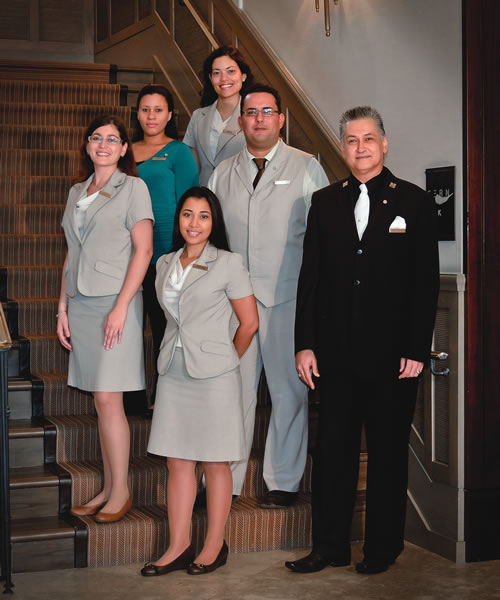 At 1 a.m., the ringing telephone awoke Chef Concierge Jossell Velazquez of The St. Regis Bahia Beach Resort. On the line was the night duty manager for the resort with an important request.

“She requested that I report to work immediately, as there was a urgent situation,” Velazquez says. “When I inquired as to the nature of the service need, she simply stated: ‘You need to get here and get a live goat!’ There was an entire film crew in the final filming of a local documentary about the fictitious character Chupacabra, a space alien that originated in Puerto Rico and who has been credited with the death of farm animals that have been depleted of blood. The main character, an old goat with long horns, had been found dead.”

The film crew needed a replacement fast so they could finish filming between 3 and 5 a.m. and make their international flight out of Puerto Rico. Velazquez came to the rescue, summoning the night skeleton crew to help find a local farmer with a goat that could be used as a replacement.

“We offered a nice reward to the person who achieved obtaining the goat, and within 30 minutes I had a lobby full of replacement goats,” he says. “The film was finished and the entire crew was able to depart on time.”

Fulfilling requests—no matter how large, small or out of the ordinary—is performed with gracious hospitality by the concierge team at The St. Regis Bahia Beach Resort, the only AAA Five Diamond property in Puerto Rico. The team consists of six concierges, including Velazquez, the most senior of the group with 15 years of experience and membership of Les Clefs d’Or, the prestigious professional organization for hotel concierges. Prior to coming to The St. Regis Bahia Beach Resort approximately two years ago, he worked as a concierge for a number of premier hotels, where he created a concierge academy for one hotel group. He received much of his training from mentors in the profession and through training forums that he actively participated in after becoming a member of Les Clefs d’Or in 2006.

Also contributing to his knowledge are his interactions with guests. “There is a true art and a science to becoming a professional lobby concierge, as our training is ongoing,” Velazquez says. “There isn’t one day that goes by that I don’t learn information about our local history, culture, tours, restaurants, art and science.”

To respond to guests’ requests and convey information, all members of the concierge team are completely fluent in English and Spanish. Several of them also have some fluency in other languages, including French, Portuguese, Italian, Tagalog and American Sign Language. Each team member has brought various experiences and training backgrounds to their jobs at the resort, which opened in late 2010.

Starting as concierge at the opening of the resort in 2010 was Dineys Romero, who gained hospitality experience at a different hotel in Puerto Rico while pursuing a bachelor’s degree. Her concierge training at St. Regis has been on-the-job and she credits Velazquez with being an excellent mentor; she also believes she has the personal qualities that make her a good fit for the job.

“I love to serve,” Romero says. “I’m good at multitasking, which is definitely a must in this area. Keeping an eye on little details is another quality I have, but most important of all is being genuine.

“Working over the first holidays, the actual first holidays of the hotel back in 2010, made me test my multitasking ability more than ever,” she continues. 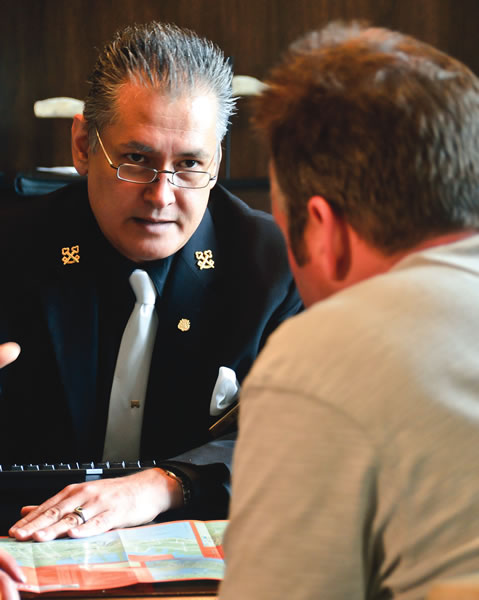 Concierge Raymond Cabrera, with more than four years in the profession, also ensures that every guest wish is fulfilled. One of his more “extreme” tasks has been driving two hours to remote mountain towns looking for the most authentic, non-commercialized Puerto Rican artisan coffee for guests.

His desire to satisfy guests’ wishes didn’t come from a classroom. “I have never undergone formal training to become a professional concierge, apart from several courses and seminars on hotel and tourism operations provided by the Puerto Rico Tourism Co. and the Puerto Rico Convention Bureau,” he says. “In order to be a concierge, one only needs to possess passion for service, a keen eye for details and, most important of all, the art of warm and authentic hospitality to treat each guest as if they were a guest in our home.

“Of course, a concierge is expected to be in the know, so I do a lot reading, traveling and dining around our beautiful enchanted island,” he continues.

Being in-the-know, along with mentoring by Velazquez and training through Puerto Rico’s tourism development agency, has helped concierge Christine Mora, who is also a certified tour operator, satisfy both the everyday and eccentric guest requests. “I have been asked to find pink rubber ducks—and believe me, they are not as common as yellow rubber ducks,” she says. “I’ve also arranged helicopter transportation, needed within 24 hours, with pick-up at the resort.

The newest member to join the concierge team at The St. Regis Bahia Beach Resort is Cris Birriel. She has just a few months on the job at the resort and has worked in the profession for more than three years. Birriel’s training, devotion to the job and organizational abilities has served her well in responding to and exceeding guests’ requests.

“I had a lovely couple celebrating their 38th wedding anniversary,” she says. “I had planned out their whole week and was determined to make it special because they were coming back to the island after honeymooning here 38 years ago. I took the liberty of sending them a small present from the concierge team, and during check out the wife left me a thank you card. What she wrote was so heartwarming and so appreciative—I felt huge satisfaction in being able to impact in such a way.” 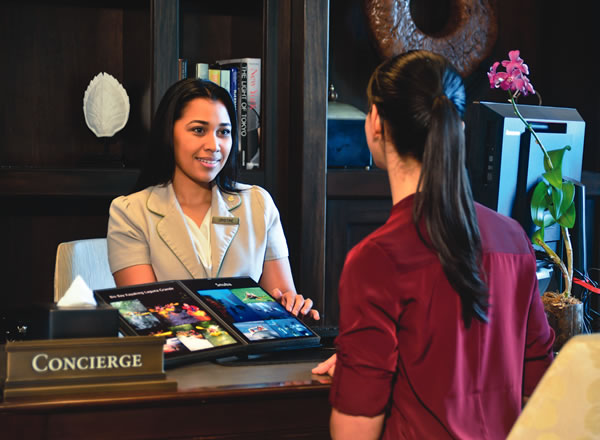 Passion for the Job

While the services the concierge team offers positively impact guests, the team members themselves are also deeply impacted by their work.

“I have been able to plan different itineraries for upcoming trips of arriving guests to our resort,” says Beth Maldonado, who has several months with the St. Regis as a concierge, receiving her training on the job. “I have accommodated all of their needs regarding arrival and departure transportation, restaurant reservations, transportation to different destinations, tours for special days and special requests such as personalized amenities for their loved ones. What I enjoy most is that with every single planned trip for my loyal guests, I can put a smile on their faces, even though they are not yet here.”

Having the opportunity to meet and learn from people from a diversity of cultures on a daily basis is one of the things Maldonado most appreciates. “Being able to assist a person in accomplishing their dream vacation, either by scheduling their entire stay or just noting a special occasion and taking care of a detail for them, brings a pleasant sense of fulfillment that is hard to describe,” she says.

It is the daily interactions with guests, fulfilling all service requests and working collectively with the concierge team that provide the chef concierge with the most satisfaction.

“There is nothing like being a positive influence in the overall experiences of our guests,” Velazquez says. “Guests to The St. Regis Bahia Beach Resort can be assured of receiving warm and authentic service on every visit.” 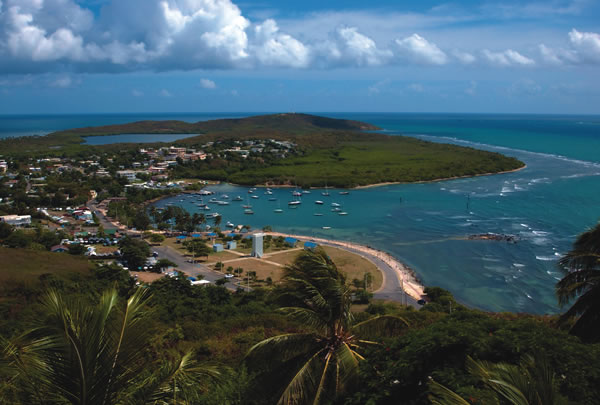 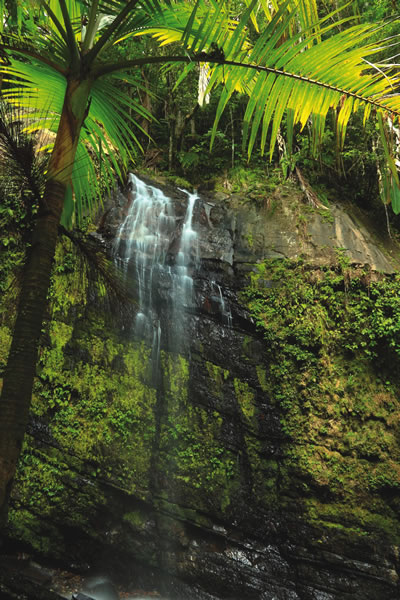 “No one should leave Puerto Rico without experiencing the Bioluminescent Bay tour in Las Croabas Park at Fajardo,” concierge Dineys Romero says. “It is a very unique experience that you will keep forever in your mind. After the tour, a very nice option for excellent food is Pasta y Pueblo, a small eatery in the town of Luquillo. The chef does wonders with the food there.”

“For adventures, visiting the Rio Camuy Caves is an amazing experience, as is exploring the beaches located on the west side of the island,” concierge Cris Birriel says. “For authentic local food, I always recommend Café La Princesa in Old San Juan. It has a spectacular atmosphere, outdoor dining under trees with twinkle lights and live salsa music or jazz, and the service is exquisite. One must also try their delicious ceviche.”

“No visit to Puerto Rico is ever complete without visiting my Old San Juan,” concierge Raymond Cabrera says. “This is a city I hold very close to my heart where visitors can take in the history, sounds and hospitality that distinguishes Puerto Rican people.”

“For the most adventurous ones, in search of an authentic experience a little way out of the city, I suggest going to the restaurant Guavate in the town of Cayey,” concierge Christine Mora says. “This area is also known as the Pork Highway and is located in the mountains, where you can also add a stop at the Carite State Forest, a good alternative for family picnics.”

“My ‘locals only’ recommendation is Salitre Meson Costero, a restaurant located in the town of Arecibo on the north coast of the island, which is well known by the fisherman around the area because they give their early fresh catches from the ocean to the restaurant,” concierge Beth Maldonado says. “When you order a main entree of a selected fish in the early afternoon, you are experiencing freshness and great taste.”

“For local attractions, no visitor should leave Puerto Rico without experiencing our unique features, such as El Yunque National Forest,” says Jossell Velazquez, chef concierge at the resort. “It is the only tropical rainforest that is part of the United States and is considered by many as one of the natural wonders of the world. And for the food connoisseur visiting The St. Regis Bahia Beach Resort, be sure to visit Molasses restaurant and enjoy our local mofongo prepared by chef Gustavo Sanchez.”