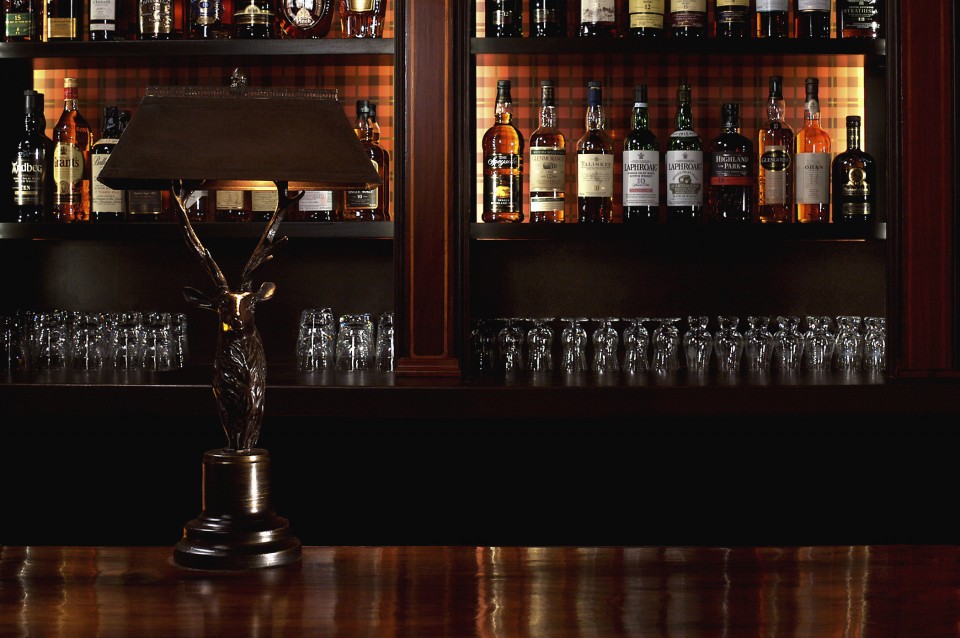 The year is 1928 and a man walks swiftly down the streets of Los Angles. He looks around briefly, then pushes open an unmarked door and walks down a flight of stairs, entering into the boozy underworld of the Prohibition era. While the streets were dry from 1920 to 1933, alcohol ran heavily beneath the sidewalks, and if you knew the right people, you could get directions to the nearest underground speakeasy—all you needed was a code word and a bit of stealth to get in.

Now, some 80 years later, LA is reveling in the nostalgia of its rebellious years with a host of speakeasy-themed bars around town. “I think because of the craft cocktail trend, speakeasies have kind of gotten a second life,” says Eric Spivak, founder of Under Raidar, a company that takes small groups on tours of local speakeasies. “People are finding new ways of doing them and that’s really impacting how these are taking off.”

From an unmarked door in the back of an operating barbershop to a secret staircase under a bed, the entrances to the hottest bars are usually dark, cramped and hidden. Once inside, the drinks are unforgettable, handcrafted by mixologists and tinged with the thrill of the forbidden. The following is your guide to these inconspicuous spots, along with the secret phrases needed to get in.

A low-key hangout, The Varnish impresses guests with a 1920s aesthetic framed by vintage wooden booths and bartenders clad in vests over rolled up shirtsleeves. The intimate space encourages conversation amongst friends with house rules against loud behavior and an ambience set to the tune of soft jazz music from a live band on Sunday, Monday and Tuesday nights after 9.

Sasha Petraske, who opened the revered speakeasy-style den Milk & Honey in New York in 2000 without any physical menus, introduced The Varnish to LA in similar fashion. Rather than ordering from a list, just ask for the “Bartender’s Choice,” and rattle off a few of your preferred ingredients in a cocktail. Or let them completely surprise your taste buds with a concoction made of ginger syrup, fresh-squeezed grapefruit juice and egg whites.

Enter through Cole’s restaurant on Sixth Street, then look for a door with an etching of a cocktail in the back that appears to lead to a storage closet—which it once was before The Varnish opened.

On the surface, Blind Barber is just what its name implies—a place for men to get their hair trimmed by a barber who ignores passersby searching for a stiff drink in the back. A cocktail bar is kept hidden by a door with a coat rack and opens to guests toward the end of the working day at 6 p.m.

Traditional black-and-white tile is carried throughout the entire space, but the flickering wall-mounted candles and dark panels set the tone for the backroom bar. Here, award-winning mixologists stir daring cocktails as well as classic sips like an Old-Fashioned. To sate an appetite, there is an innovative comfort food menu with items like gourmet grilled cheese sandwiches, pastrami tacos and truffle popcorn. Live disc jockeys animate the room on Friday and Saturday evenings, but it’s a much more mellow affair earlier in the week.

Follow the checkered floor to the back of the barbershop, where a door opens up to the bar.

A nondescript door appears to be an entrance to just another dive bar, but inside you’ll find a classy venue in the style of “The Great Gatsby.” The hardest part, however, is finding your way inside. The first room behind the red door is full of antique doorknobs from floor to ceiling. A bouncer waits patiently as guests try all of the knobs, offering small hints as to which is the correct one.

As for the drinks, Jeremy Allen, a mixologist at Lock & Key, recommends ordering the Old Money, a scotch cocktail with fresh ginger, bitters and simple syrup. Other favorites are the negroni and the barrel-aged cocktail of the day. On chilly spring nights, guests can enjoy the outdoor patio surrounded by heat lamps for a simple yet thrilling evening out.

Get past the red door on Vermont Street, then find the doorknob that reveals the bar.

Jackalope is a whiskey lover’s heaven. Behind the wall of whiskey at Seven Grand, there is yet another premium selection to explore at a second bar—this one not as obvious to the naked eye. Even if you’re let inside, there’s only space for 18 people; a hostess will take your name and send a text when there’s room.

For more exclusivity, only three mixed drinks are served here: the Old-Fashioned, Manhattan and Highball. Serious sippers can also use the locker program, which stores their personal stash in a cabinet and includes a private cart with ice, glassware and mixers. Guests can choose from more than 120 types, including rare brands of Japanese whiskey alongside American bourbon, rye and scotch. Knowledgeable bartenders are also available to offer tailored suggestions and prepare whiskey flights.

Look for a door in the back of Seven Grand without a knob. Ring the doorbell to be let inside.

The letter “R” sprawled in Old English across the building at Eighth and Irolo streets in Koreatown isn’t graffiti; it signifies the discreet and password-protected R Bar. Uttering a code word—which can be found on social media channels—to the bartender behind the giant wooden doors grants entry to the bar, which is spacious for a standard speakeasy. A full bar and kitchen serves craft beers and cocktails to accompany dinner items like sandwiches and burgers as well as small plates, such as the specialty feta fries, a crispy snack doused with spicy feta cheese, Kalamata olives and pepper.

There is always music playing, either from the jukebox, a DJ or singers who belt out the lyrics of famous hits during karaoke nights. And on other evenings, R Bar plays host to trivia sessions, stand-up comedy acts and movie screenings.

A small side street off Hollywood Boulevard, North Hudson Avenue, is occupied by a 19th century, three-story Victorian house with a buried bar. The former hotel and brothel maintains its past life—and derived its current title—from the neon “No Vacancy” sign outside.

Entry is first blocked by a doorman, who directs visitors up a flight of stairs and into a narrow hallway that dead-ends at three doors. Only one is unlocked and opens up to a room, where a woman in lingerie sitting on the bed greets arrivers and explains the house rules, after which the bed slides open, revealing a secret set of stairs.

The indoor and outdoor space combined makes No Vacancy one of the largest speakeasies in LA. Even more impressive, inventive drinks like the popular China Doll and The Professor are complemented by nightly entertainment, including tightrope walkers and burlesque shows.

Make your way past the doorman, up a flight of stairs and into a bedroom, where the bed slides out of the way to reveal a staircase. 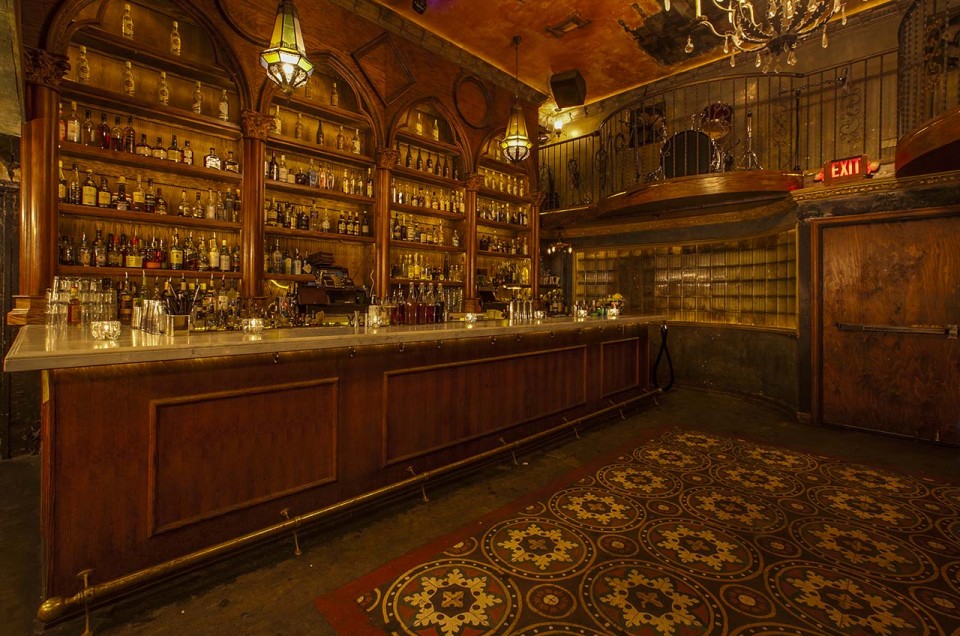 Havana, Cuba, circa 1950, is recreated in Los Angeles at La Descarga. The themed nightspot offers approximately 70 varieties of rum from around the world as well as a lounge for puffing on cigars, and admittance to the space is a mysterious process.

Reservations are crucial, but it’s still not as easy as stating your name and walking inside. A doorman escorts guests up the stairs to an office with a receptionist who confirms the reservation and motions toward an armoire packed with Cuban garb. After pushing the clothes aside, a hallway reveals the hideaway decorated with old pictures and trinkets from Cuba. Lively salsa music from a band results in a crowded dance floor, and burlesque performances also occur throughout the evening for added amusement.

Make a reservation online and check in at the door upon arrival. Someone will escort you up a flight of stairs and through a closet door.