Exotic nectars from all around the world have taken the cheese and honey pairing to new heights. 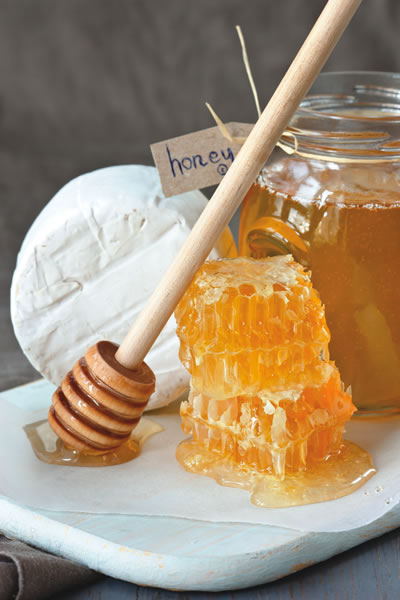 Cheese and wine pairings are second nature for many chefs and oenophiles, but lovers of fine foods are discovering a sweeter mate for the dairy product that has around 500 varieties. Honey—the sticky accoutrement most often used in baking, added to tea or as a spread—provides the perfect complement to cheese’s salty flavor.

Laurey Masterton, a practicing beekeeper and author of “The Fresh Honey Cookbook: 84 Recipes From a Beekeeper’s Kitchen,” was first introduced to the marriage of honey and cheese about 15 years ago at an ancient abbey in Tuscany when she sampled an appetizer featuring aged pecorino cheese, along with honey and pears. The combination of salty, sweet, tart and bitter was an inspiration.

“The chestnut honey came from the base of Mount Amiata … and it’s a really rare honey,” she says. “It’s very bitter and dark, but when you pair it with a sweet pear and the salty cheese, it’s a wonderful thing where the sum is worth much [more] than the parts individually.”

Masterton, who is also a chef that works with the National Honey Board, suggests including fruit to create the ultimate blend of complementing and contrasting flavors. For a winning combination, she says, consider the balance, remaining careful not to overwhelm one ingredient with another.

Just as various cheeses have different flavors and strengths, there are diverse honey varietals, each the result of bees collecting nectar from different plants. Acacia honey, for example, is a very light varietal from Italy that is easily overwhelmed. For a pairing, “a young brie would be nice,” Masterton suggests.

The taste of honey varietals is much subtler than that of their infused counterparts. Infused honey blends the substance with ingredients such as lavender, while varietals gain their flavor the type of plants that bees visit to collect nectar. Some honey varietals, such as buckwheat or avocado, are actually bitter, making them delicious complements to strong blue cheeses or a salty cheddar.

Paul Piscopo, the executive chef at The St. Regis San Francisco, is sharing his passion for honey and beekeeping with Bay Area diners. The hotel recently began hosting its own hives, and the chef expects he will be able to harvest honey from them next year.

“It’s not incredibly difficult; it just takes a little bit of time,” Piscopo says of starting and maintaining the hives. “Like anything else, once you start to learn about something you want to learn more, and you get inspired by it.”

Also a fan of pairing honey and cheese in dishes throughout the menu, Piscopo has used both ingredients to create specialties like his tortellini plate with heirloom peppers, house-made ricotta and honey. He explains just a small drizzle of honey on the cheese, “about a hair’s thickness,” is enough for an accent.

“To slop honey around and waste it is a travesty,” Masterton explains, adding that one honeybee will produce about 1/12 of a teaspoon of honey in its entire life. “If you think that a pound … or a jar of honey takes about 625 bees to make—their life’s work—it really is a precious commodity. The bees are chemists and cooks and scientists.”

Another factor to consider when pairing honey and cheese is location. “It’s best if you have a locally made cheese … and a locally sourced honey,” Masterton says, adding that stone fruit, citrus fruit or berries tend to mingle well with honey and cheese flavors. “If you’re from Vermont, for example, I would say a McIntosh apple with cheddar cheese, with some local clover honey.”

While most reputable, high-end retail markets reliably carry good honey products, Masterton advises the best way to audit quality is to check labels and make sure the only ingredient is pure honey. Also, turn the container to examine the honey’s thickness. “If it’s too thin, it’s probably been watered on,” she says. “The best thing to do, [however], is buy honey directly from a beekeeper [at] a farmers market. Just like with produce, if you know the grower, it’s better.” B