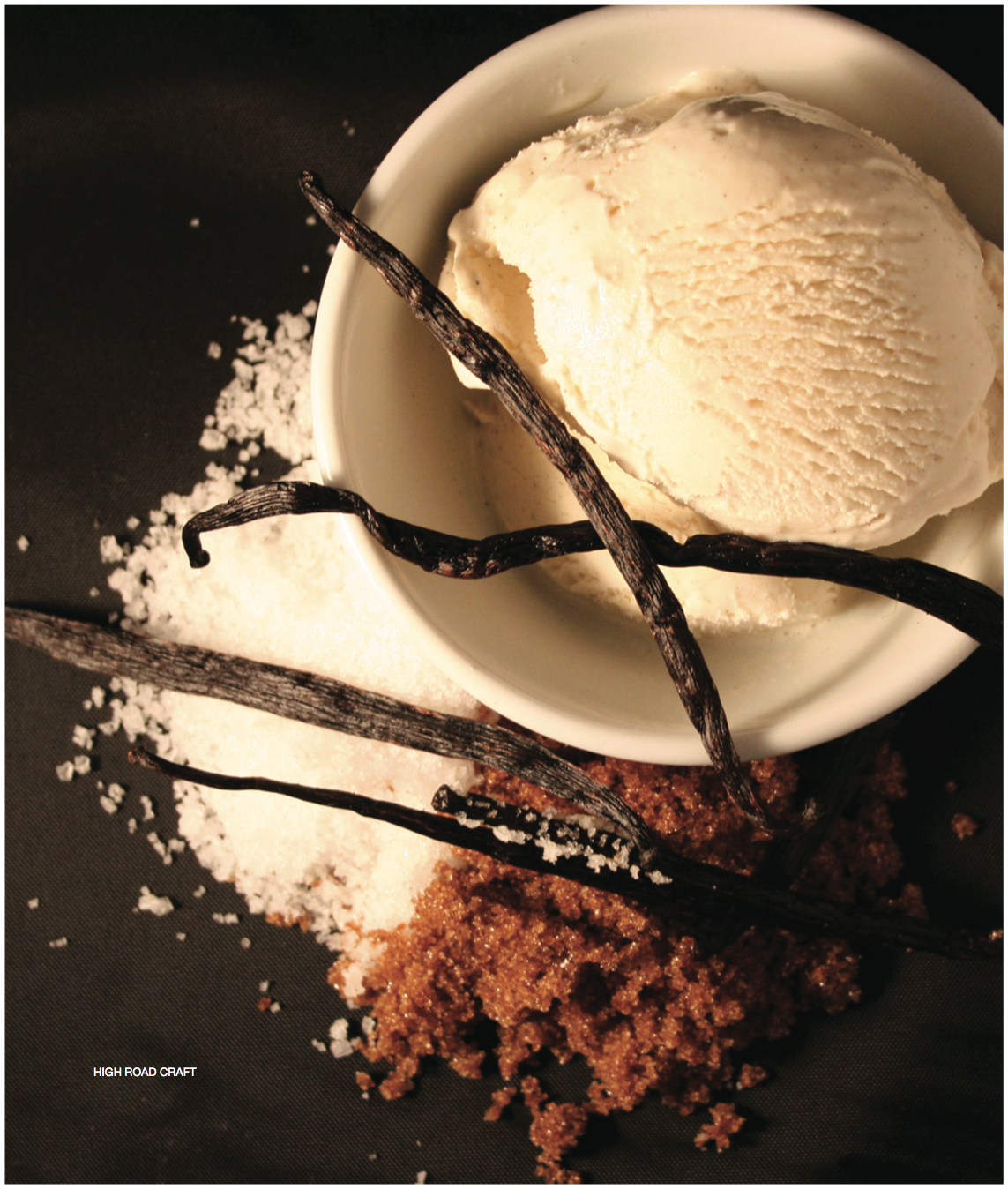 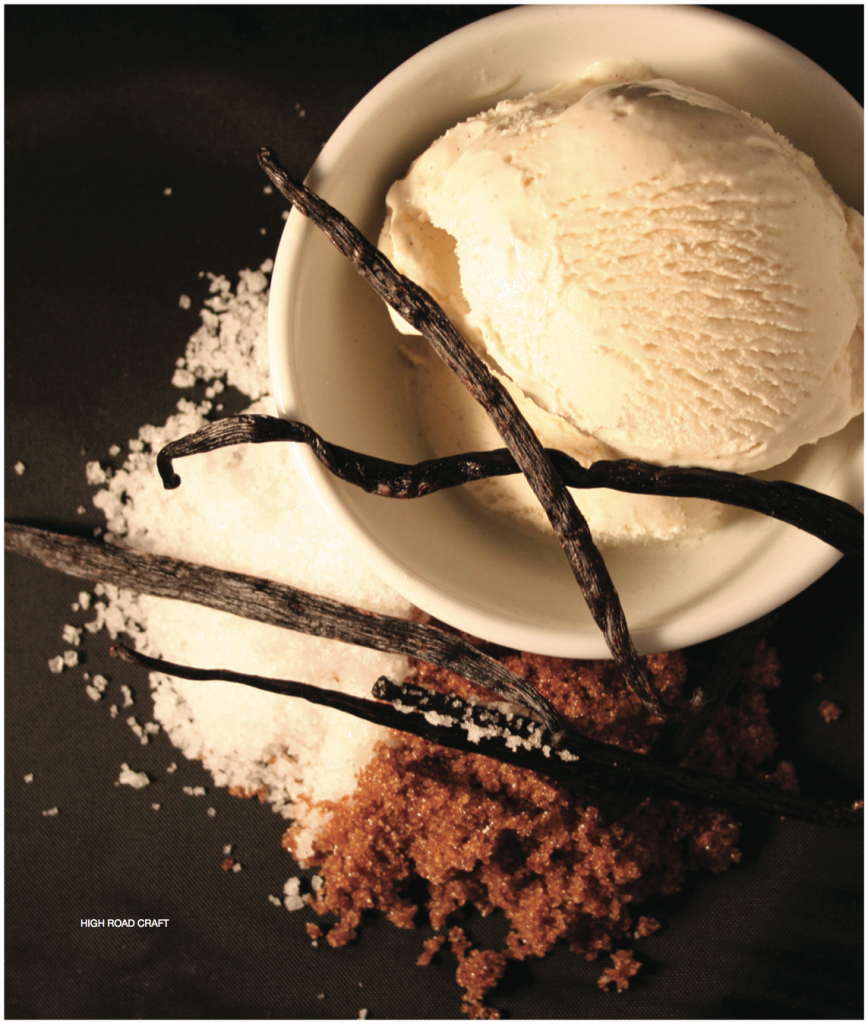 When Nicolas Cage tells girlfriend Lula (Laura Dern) that she’s “hotter than Georgia asphalt” in the classic film “Wild At Heart,” there’s a reason he chose the Peach State for his compliment. Locals may bristle when anyone uses the tired nickname “Hotlanta,” but in the summertime the town certainly heats up. Fortunately, our exceptional foodie scene includes several great gourmet ice cream companies dedicated to helping customers beat the summer heat in the most decadent ways imaginable.

Keith Schroeder worked as a chef for 15 years before getting his MBA at North Atlanta’s Kennesaw State University. It was there that Schroeder and his classmates drew up a business plan for an ice cream company “for chefs, by chefs.” When the class project won University of Nebraska’s International New Ventures Competition, he and wife Nicki realized it was time to take the entrepreneurial plunge.

The Schroeders opened High Road Craft with a fellow Kennesaw grad a few months after Keith got his MBA, and the company quickly emerged as a foodie favorite. Initially sold to chefs only, their ice cream can be found on the menus at Chateau Elan, Davio’s Northern Italian Steakhouse, Southern Art and Bourbon Bar, and many other upscale restaurants. They also have a small factory store open to the public on Saturdays, and their products can be purchased at Whole Foods and Dean & Deluca.

“I’m an ice cream fanatic,” Schroeder confesses, “but not necessarily [with] a sweet tooth. So I wanted to craft ice creams that exhibited less of the sticky-sweetness of classic American ice cream. I believe ice cream could have the same awakening that happened to chocolate, cheese, wine and spirits.”

“We take the same approach to making ice cream that a great saucier or mixologist would take when concocting their products,” Schroeder explains. “We have this crazy goal of becoming the global authority on making ice cream. There’s a lifetime of details to learn and a million ways to seek a deeper understanding of our craft, but we’re getting there.” (2241 Perimeter Park Dr., Ste. 7; 678-701-7623; highroadcraft.com 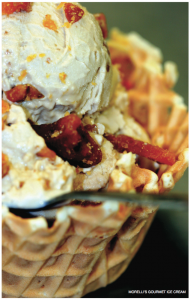 Named the fourth-best ice cream shop in America by Bon Appétit back in 2009, Morelli’s can credit its very existence to the economic downturn.

After working in pharmaceutical sales for more than 10 years, Donald Sargent was laid off in 2008. Rather than beat down corporate doors searching for another 9 to 5 job, he contemplated returning to his childhood love of making ice cream. While he was looking to buy a house in East Atlanta, his realtor mentioned that the local Bruster’s ice cream shop had closed down. Sensing serendipity, Sargent bought the place immediately and named it after his wife, Clarissa Morelli. The rest, as they say, is history.

Sargent, who worked for an ice cream shop during high school in his native Tampa, set out with one simple goal in mind—to create the best and most unique ice cream in the city. Within a matter of weeks, critics were raving about Morelli’s imaginative flavors, such as Salted Caramel, Krispy Kreme Donut and Maple Bacon Brittle.

“We create new flavors weekly. A lot of the inspiration comes from interesting flavor combinations we see in normal desserts that no one would ever imagine as an ice cream flavor,” Sargent says. “And at least 40 percent of our concepts come from our customers putting flavor suggestions in our flavor box.”

The company now has two locations (the second one is in the Edgewood Shopping Center), and Sargent attributes their success to the high quality of their product. “We have coined the phrase ‘super dooper premium’ to describe it,” he says proudly. “We never use flavorings for our ice cream. If it says bourbon, jalapeño or bacon, it’s really in there. And lastly, our machines put very little air in the ice cream, so you get a rich and creamy product that is full of flavor.” (749 Moreland Ave. SE; 404-622- 0210; morellisicecream.com)

Atlanta’s pioneering gourmet ice cream shop, Jake’s was co-founded by Jake Rothschild back in 1999, at a time when the city’s best alternatives were Baskin-Robbins and Dairy Queen. Originally located on Highland Avenue in the Old Fourth Ward, the company has won “Best of Atlanta” accolades from numerous local publications, and earned praise from respected magazines such as Food & Wine and Southern Living.

Rothschild, a UNC-Chapel Hill grad who set out to become a children’s book author, brings his own charming, creative personality to the business, concocting innovative flavors such as Brown Shugah Vanilla, Red Velvet Cakescream and Diesel Fuel (which is made with coffee, chocolate covered espresso beans and cinnamon). They introduce new flavors every few weeks based on requests from chefs and customers, whom Rothschild will often invite in to help make the new product.

“Because we micro-batch, it tastes like homemade, hand-churned ice cream,” Rothschild says. “It’s made from all natural ingredients—when we make our Key Lime Piescream, we put two pies in the blend, not flavoring or coloring. Our philosophy is ‘more is more.’ We tend to tip the scales in going over the top.”

The company moved to its current Irwin Street Market shop back in 2005, but Jake’s fantastic flavors can also be found on the menu at Anis Bistro, Café Circa, Haven and three Inman Perk coffee house locations. (660 Irwin St.; 678-705- 7945; jakesicecream.com) 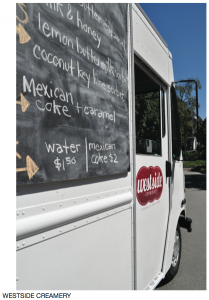 More often than not, a person goes into business out of sheer entrepreneurial spirit. In the case of husband and wife team Greg and Maggie Smith, it was because their friends wouldn’t stop begging to buy their homemade ice cream.

Founded in 2010, Westside Creamery has no store, cannot be found in any retail outlets, and their distinctive food truck’s location on any given weekend (typically a local farmers market or festival) can only be found via social media. But their handcrafted “farm to bowl” approach has earned them a rapidly growing following among Atlanta’s devout locavore community.

Asked what makes them unique, Maggie says, “I think it’s the fact that you find it, not in the grocery store aisle, but on the streets of Atlanta, at farmers markets and at parties. It’s like a very special treat in that way and may remind people of chasing ice cream trucks in their childhood, but with more virtuous scoops of the sweet stuff.” (westsidecreamery.com)

With his long hair, broad grin and rakishly handsome face, Paolo Dalla Zorza could easily be mistaken for a soap opera star or a magician (which, coincidentally, he used to be in his native Italy) rather than one of Atlanta’s most celebrated gelato makers. This undeniably colorful character, who is fluent in five languages and holds a commercial-rated airline pilot’s license, got his degree as a veterinary surgeon before ultimately finding his true calling—bringing authentic Italian gelato to America.

Atlanta’s Virginia Highlands neighborhood proved the perfect place for it, and for the last 12 years locals have heaped praise on this one-of-a-kind culinary artist. He prides himself on doing things the old-fashioned way, meaning no instant mixes, only the freshest produce and surprisingly healthy recipes that range from a mere 2 percent (for fruit-based gelato) to 7 percent (milk-based) fat.

But what Paolo’s products lack in caloric content, they more than make up for in culinary creativity. His menu boasts more than 50 whimsical flavors running the gamut from violet and jasmine to orange blossom and chili pepper, and he’s famous for creating gelato art, such as sculpting his work of art, “Spaghetti,” from pasta-shaped vanilla gelato, strawberry sauce and grated coconut. In person he may come across like a wacky culinary scientist, but the genius of his work has garnered rave reviews from publications including Bon Appétit. (1025 Virginia Ave. NE; 404-607-0055; paolosgelato.com)

These artisan ice cream makers certainly provide more than enough reason to welcome summer and all its fantastic flavors. Try a few, then return for a second scoop on your next trip to Atlanta. 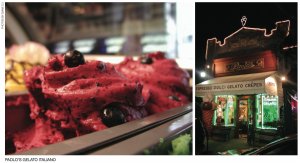 To keep the delicious flavors coming, here are three more places to indulge your sweet tooth:

With three Atlanta locations, this European-style gourmet chocolatier will take you to your happy place, offering an amazing array of hand-crafted sweets as well as cinnamon, chocolate and aztec (spicy chocolate) gelato. (cacaoatlanta.com)

The King of Pops

Steven Carse has become an Atlanta legend for his popsicles sold from a food cart, which come in grown-up flavors such as Chocolate Sea Salt, Tangerine Basil and Pineapple Habañero. Check his website to find out where he and his brothers will be on any given day, as they move around a lot. (kingofpops.net)