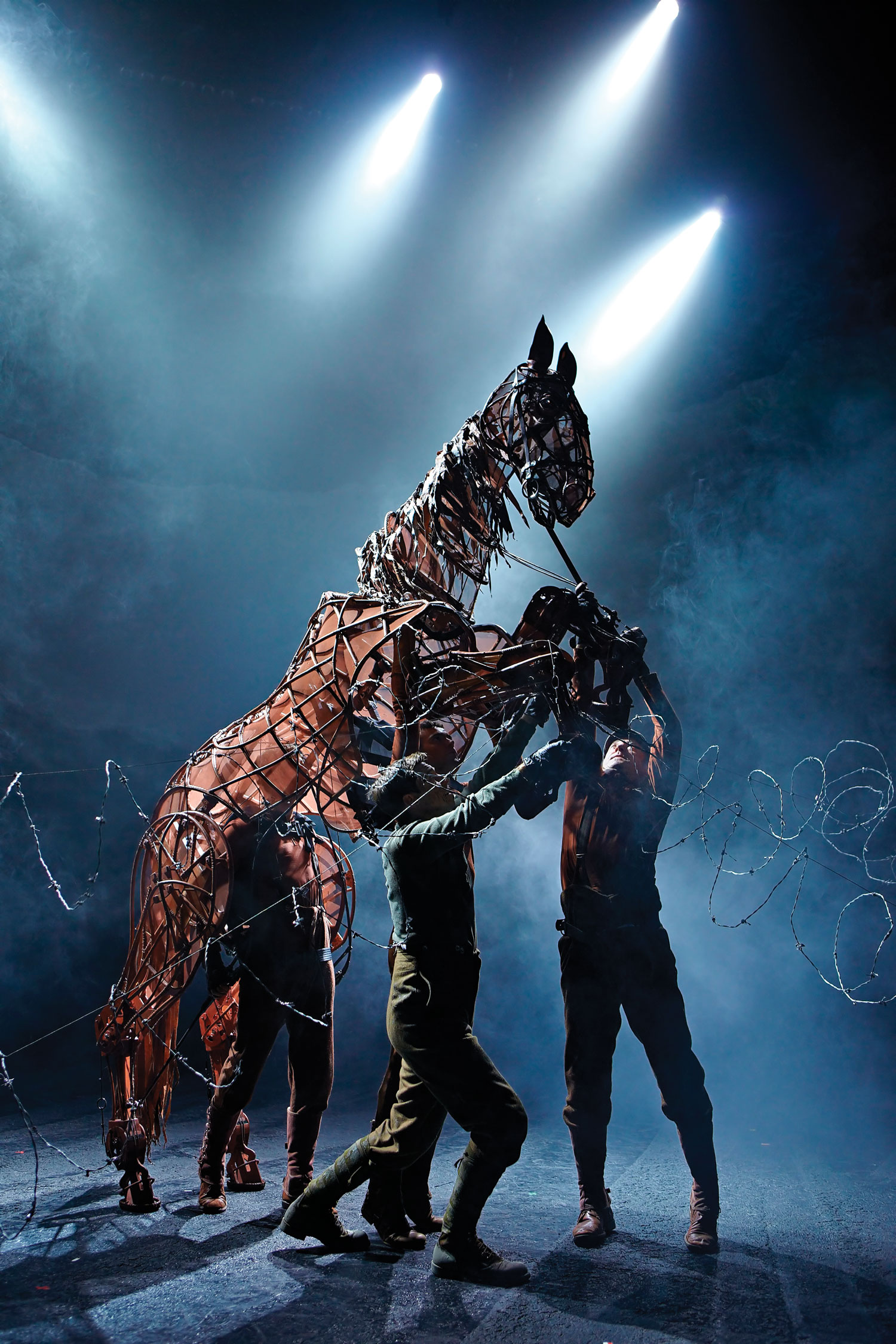 As one of Atlanta’s most historic landmarks, the Fox Theatre is
equal parts history and fantasy. 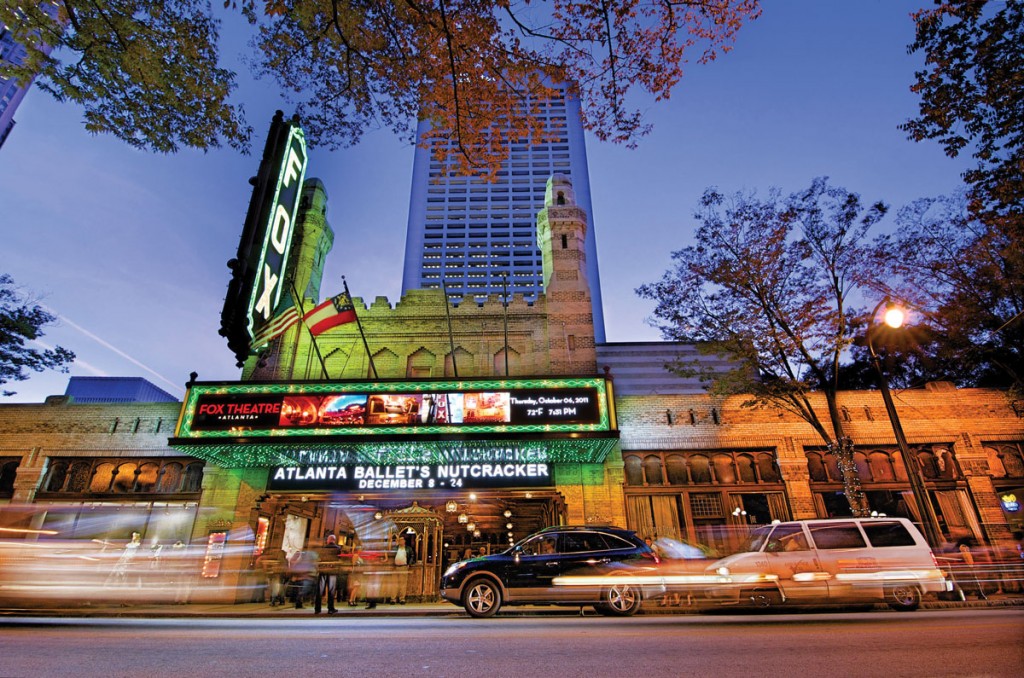 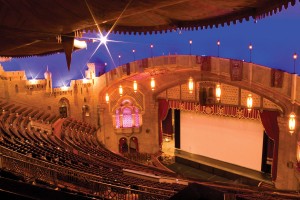 Few Atlanta landmarks are as fiercely loved as the Fox Theatre. Famously nicknamed “the Fabulous Fox,” the Arabian-themed movie palace is the home of first dates, family traditions, first kisses and more for generations of Atlantans.

With such a celebrated legacy, it’s hard to imagine the Fox ever downtrodden or neglected, but Atlanta’s crown jewel—now the number two theater in the world—was once only a diamond in the rough.

What Atlanta knows now as the Fox was originally built to be a Shriner temple. As the organization’s membership grew in the late 1910s, so did the need for a facility large enough to hold all of its members. By 1927, membership had ballooned to 5,000, and the Shriners broke ground with a design from Atlanta firm Marye, Alger and Vinour that reflected both the Shriner’s Middle Eastern roots and America’s fascination with Egypt following the discovery of King Tutankhamun’s tomb.

The Shriners had one modest request: When finished, their temple should “out-Baghdad Baghdad.” While its exterior minarets and distinctive onion dome certainly evoke that imagery, it’s the 4,678-seat Arabian castle-inspired auditorium that elevates the Fox to breathtaking fantasy.

Soaring castle walls frame the stage, and the ultramarine ceiling, speckled with dozens of twinkling crystals, brings in the nighttime sky. The illusion of natural light is carried throughout the theater, with numerous recessed walls and hidden lighting simulating daylight in ballrooms to bathrooms. 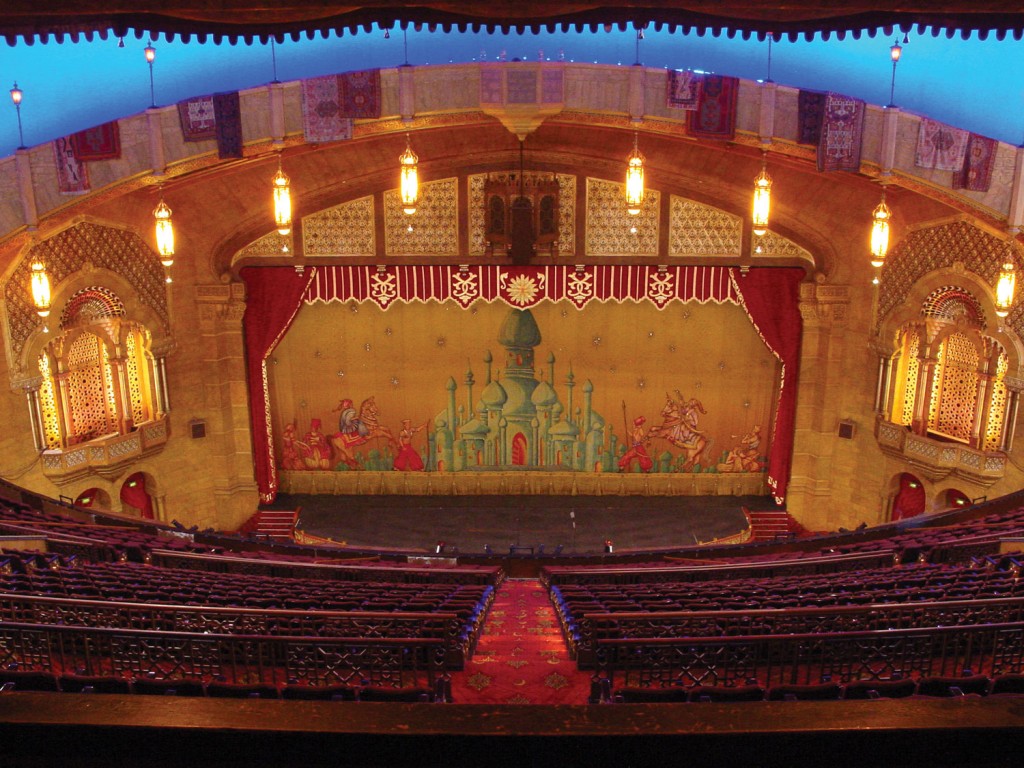 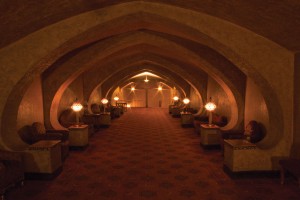 Lead designer Vinour was especially fond of the use of trompe l’oeil: Intricate grates elegantly hide radiators, and what appear to be wooden beams are actually plaster delicately painted to resemble wood.

For Molly Fortune, restoration director at the Fox Theatre, one of its most interesting design aspects is the convergence of new and old. The building’s backbone contains both brick and steel, combining traditional masonry with emerging construction techniques of the late 1920s. The design also accounted for a full heating and cooling system and centralized vacuuming, luxuries of the time that are still operational today.

Some of its most dramatic decoration, like the Bedouin canopy along the back of the auditorium’s ceiling, actually serves a clever, practical purpose. While it might seem purely to awe, the steel-framed canopy was designed to direct sound to the farthest reaches of the balcony, ensuring that everyone could hear the action on stage, no matter how far from it they sat.

Construction of the Fox Theatre was completed in a little over 18 months. Early in the process, the Shriners realized their temple was underfunded and leased the building to theater magnate (and Fox namesake) William Fox. The Fox opened to much fanfare on Christmas Day 1929, just two months after Black Tuesday.

Only 125 weeks after the Fox’s grand opening, William Fox declared bankruptcy. The Great Depression made the Fox’s first few years a struggle, and the Fox was auctioned on the courthouse stairs to a group of Shriner officials for $75,000 in 1932.

Throughout the ’30s the Fox scraped by, but as the nation’s economy started to rebound, so did the Fox. By the ’40s, famed big-band orchestras led by Tommy Dorsey and Glenn Miller performed to sold-out crowds in the Egyptian Ballroom. The Metropolitan Opera began a 20-year engagement of highly anticipated shows each spring. It had finally become the grand palace it was envisioned to be.

By the early ’70s, though, the Fox’s shine again began to lose its luster. Suburban development, television and large movie chains contributed to dismal sales and dwindling audiences for the Fox, which had begun showing second-run movies to survive. In 1974, Southern Bell looked to purchase the Fox, but not for its moneymaking potential. Instead, the company was interested in building a new headquarters where the Fox stood.

Public reaction was swift. Citizens launched a “Save the Fox” campaign to prevent the demolition of the historic theater, and a nonprofit organization, Atlanta Landmarks, was formed specifically for its protection. An agreement was reached that temporarily stalled demolition, but to make it permanent, Atlanta Landmarks would need to raise almost $2 million over the course of three years. With contributions from corporations and citizens alike, the organization was able to pay off its debt with six months to spare.

In the 30 years since, the Fox has become a modern success story for historic preservation. The theater that was once slated for demolition is now a leader in its field, welcoming more than 750,000 patrons to 300-plus shows each year.

It is also the only theater of its kind in the nation with a full-time restoration department. Fortune’s team of highly skilled artisans and historic preservation specialists meticulously restore, preserve and archive everything from the theater’s custom carpets to its extensive collection of original period furniture.

And, in keeping with the Fox’s tradition of melding new and old, the theater’s state-of-the-art sound, lighting and digital projection systems run alongside its original Moller organ and Brenograph projector, which lead audiences in ’30s-era sing-a-longs before many shows. 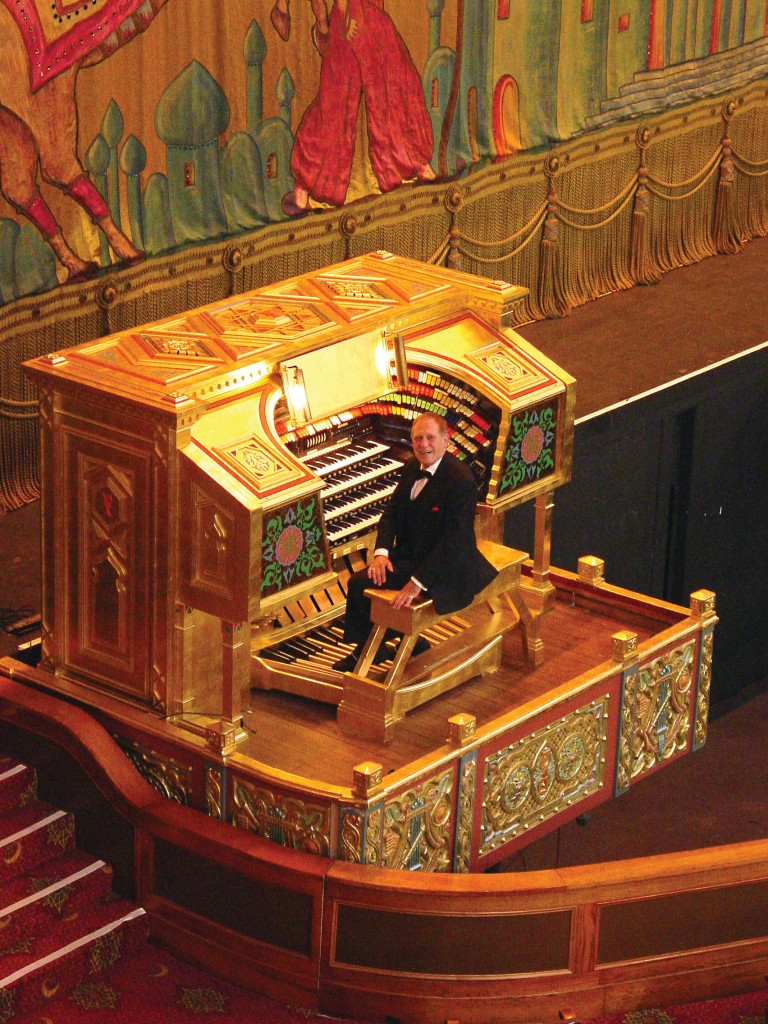 Throughout the years, a few notable names in Fox history have risen to become legendary. Here are the stories of some of the Fox’s closest friends.

Mighty Mo: If the Fabulous Fox had a heartbeat, it would be kept by Mighty Mo, the theater’s original Moller organ. Custom built for the Fox, Mighty Mo is the second-largest theater organ in the country, only surpassed by the Wurlitzer at Radio City Music Hall. Mighty Mo’s 3,622 pipes have led crowds through one of the theater’s most treasured traditions—the pre-show sing-a-long—since the Fox opened in 1929.

Joe Patten: Better known as the “Phantom of the Fox,” Patten is credited with restoring Mighty Mo after it fell into disrepair. It took Patten and a team of pipe organ experts from the American Theatre Organ Society 10 months to completely rewire the instrument, which now plays as strongly as the day it was built. He’s also the only person who can call 660 Peachtree home: The Fox has allowed Patten to live in its nearly 3,700-square-foot private apartment rent-free for more than 30 years.

Beauchamp Carr: When the Fox faced demolition in the mid-’70s, Carr, then a young banker, quit his job to volunteer full-time for the Save the Fox campaign. His fundraising efforts were instrumental in keeping the Fox alive. Since then, he has continued to foster the growth of Atlanta’s arts community by raising an estimated $177 million during a 35-year career at the city’s highly respected Woodruff Arts Center.

As the home theater for both Atlanta’s Theater of the Stars and Broadway Across America’s Atlanta productions, the Fox is the city’s premier venue for award-winning theater as well as top musical and comedy acts from around the globe. 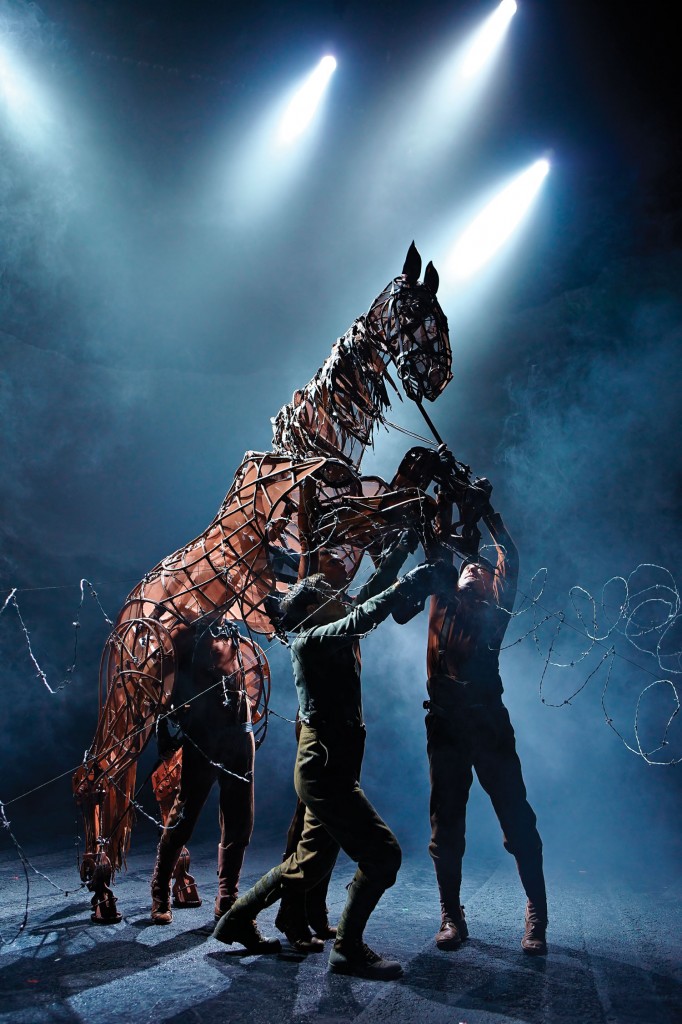 Based off Michael Morpurgo’s novel of the same name, the theatrical adaptation of “War Horse” premiered in London’s National Theatre in 2007 before sweeping the 2011 Tony Awards with wins for scenic, lighting and sound design, as well as the Tony for Best Play.

“The design of the show is incredible,” says Aaron Haskell, one of three actors portraying military horse Topthorn in the play’s American tour. “When you look at the stage, it doesn’t look like there’s much there, but it really comes alive.” 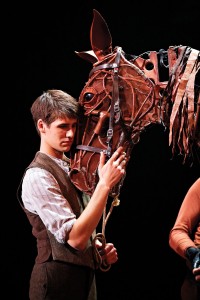 “War Horse” follows the story of Joey, a horse sold to the British cavalry in World War I, and English farm boy Albert’s mission to find him. Bringing the story’s equine characters to life on stage—and fully capturing all the action inherent in a wartime setting—involved the innovative use of larger-than-life-size puppets.

Developed by Handspring Puppet Co., each 7-foot horse is composed of three actors: one for the hind legs, one for the front legs and one for the horse’s head. The actors spent months learning how to work as one and communicate through animalistic movement and expression. The result is a remarkably realistic—and emotionally powerful—translation of “War Horse’s” story of friendship, struggle, courage and loyalty.

“It has something for everyone,” Haskell says. “It’s done for adults, but it’s also definitely for kids. … It’s definitely a well-rounded show.”

A trip to the Fox, no matter the occasion, always has something for everyone. As Fortune explains: “It’s the experience. It’s being able to go some place where it’s not just about the performance on stage. It’s about everything from picking out the outfit you’re going to wear … to the tradition: Do you go to the Varsity; do you go to a nice restaurant? It’s everything. It’s a real emotional attachment.”

Atlantans have been making these real emotional attachments with the Fox since the day it opened, which is why it’s so fiercely treasured by the city now—and why its citizens rallied around it decades ago.

“The thing that the Fox staff always says is that we are the custodians,” Fortune says. “We just happen to be the people who have been entrusted with keeping the Fox up, because the citizens saved it.”