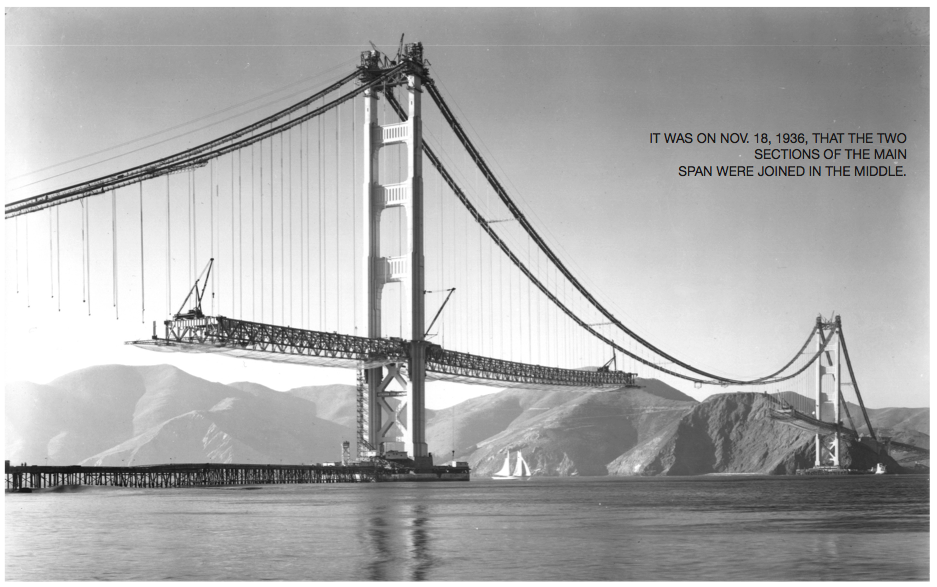 The Golden Gates of San Francisco

In its 75th year, the famous bridge remains a symbol of what great minds and tenacity can accomplish. 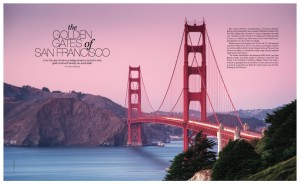 His finger pointed determinedly, 4-year-old Jackson Robert led his grandmother from Legoland California’s Miniland USA Star Wars display down the stairs to a scene of skyscrapers and cable cars. “Grandma, it’s San Francisco!” he exclaimed, his finger pointing, of course, at a 98,000-Lego brick version of one of the world’s most- photographed icons: the Golden Gate Bridge. 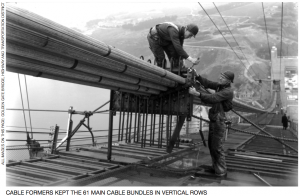 “The Golden Gate Bridge is San Francisco’s Eiffel Tower,” says Gray Brechin, founder and project scholar of California’s Living New Deal Project at the University of California, Berkeley. Brechin also holds a doctorate in geography from the university. “It seems nearly every city has an instantly recognizable icon. Before the Golden Gate, it was the Ferry Building for San Francisco.”

Completed in 1937 at a cost of $35 million, the Golden Gate Bridge project raised questions about why the city made such a huge financial outlay during a financial downturn. “It was built to open up the Redwood Empire to transportation. Marin, Sonoma and Humboldt counties were fairly inaccessible,” Brechin explains. “We are very fortunate the bridge turned out as well as it did because the original motivation was economic.” 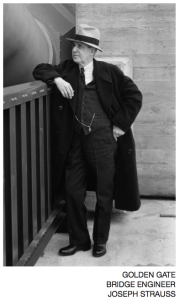 Naysayers said it would cost too much, that the span was too long, the currents too strong and the winds too harsh—gusts have been recorded at upwards of 70 miles per hour. They said no structure could withstand these natural elements. Yet over the years, the bridge has stood as a testament to resisting the forces of nature, with only three weather-related closures in its history so far—the longest lasting less than four hours.

“The bridge was built during the Great Depression,” says Mary Currie, public affairs director for the Golden Gate Bridge Highway and Transportation District, and one of the people at the helm of an on- going, yearlong 75th anniversary celebration. “Today we’re also experiencing a difficult economic time. We’re celebrating what the bridge means by reaching out and getting the community involved, just as it was when it was first built.”

Construction of the Golden Gate took just over four years, beginning in January 1933 and ending in the spring of 1937. Crews had to remove more than three million cubic feet of earth and pour the equivalent of two skyscrapers worth of concrete. Workers faced cold winds and dense fog while perched more than 500 feet above the water, working with swinging steel beams and superheated rivets. 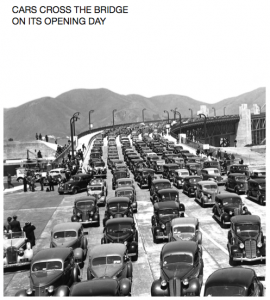 Still, the project has been hailed as one of the safest of its scale in history, with just two deadly accidents leading to 11 deaths during its construction. Ten men died at the same time on Feb. 17, 1937, when a section of scaffolding carrying 12 men fell through the safety net that was suspended under the floor of the bridge from end to end. The net is said to have saved at least 19 lives during construction. Fall survivors are said to have joined the “Halfway to Hell Club,” the name given to this group whose certain deaths were prevented by the net.

In the 75 years since the bridge’s completion, more people have died jumping from the bridge’s foot decks than during its construction. The first suicide was recorded 10 weeks after the bridge opened, and, according to Highway and Transportation District records, deaths average about 30 per year, though strong currents under the bridge mean many bodies are never recovered. Some sources claim that the bridge is the site of more suicide jumps than any other place in the world, something the Office of the Medical Examiner of the City and County of San Francisco could not confirm. This reality has led to the installation of suicide hotline phones, a ban on nighttime foot traffic and talk of installing a $45 million safety net.

On the day the bridge opened to foot traffic on May 27, 1937, communities on both sides of the bridge heralded its opening with parades and fireworks.

The Highest Form of Flattery 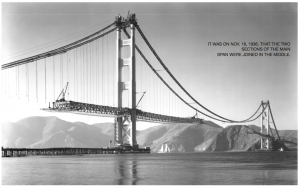 Legoland builders aren’t the only ones who have recreated what the American Society of Civil Engineers named one of the Seven Wonders of the Modern World in 1994, a list that includes the Panama Canal and the Empire State Building.

“The bridge has been made out of every kind of material imaginable,” Currie says. “Twizzlers, toothpicks, French fries. You name it. This bridge captures people’s imaginations.”

In 1977, then 17-year-old Rohnert Park, Calif., resident Scott Weaver reproduced the Golden Gate Bridge out of toothpicks and Elmer’s glue. When he was done with the bridge, he decided to keep building, recreating all of San Francisco. He claims he was offered $40,000 for the 100,000-plus toothpick creation by Ripley’s Believe It or Not, but turned it down.

One often-replicated feature of the bridge is the reddish orange color of the trusses that cut through the dense Bay Area fog. Contrary to one popular belief, the bridge was not named for its vibrant color¬—which might have been yellow and black horizontal stripes if the Navy had its way. Instead, the bridge is named for the approximately 3-mile-long and 1-mile-wide entrance from the Pacific Ocean into the San Francisco Bay—the Golden Gate Strait.

The color of the bridge was inspired by the red lead color of a construction site along Morrow’s commute, selected because it blended well with the nearby hills and contrasted with the ocean and sky. Black, grey and aluminum were considered and ruled out before arriving at the international orange used in the aerospace industry to set things apart from their surroundings.

In the first year following the initial construction, a staggering $112,000 was spent on paint maintenance. Painting continues today, with two major paint projects underway in 2012. The bridge is not painted from end- to-end each year, as reputed, but receives regular touch- ups continuously to prevent corrosion from the salty air.

More than anything, the Golden Gate Bridge acts as a beacon, a meeting ground and the inspiration for great feats.

In 1954, at age 40, fitness frontman Jack LaLanne swam the length of the bridge with a 140-pound weight attached to himself; in 1975, at 61, he repeated the swim, this time towing a 1,000 pound boat with his hand reportedly bound behind him.

Before the 1984 Los Angeles Olympics, and again in 2008 before the games in Beijing, the Olympic torch was carried across the span of the bridge. That famous crossing in 2008 inspired Free Tibet protestors to climb the bridge’s cables to hang a Tibetan flag and signs that read “No Olympic Torch in Tibet.” Over the years, protestors have chained themselves to the bridge to capture national attention for causes ranging from the Iraq war to their own potential deportation.

The Golden Gate Bridge has been on numerous magazine covers, including a February 1976 cover of “Rolling Stone.” Photos of Pope John Paul II’s stop at a bridge vista point on his 1987 spiritual outreach tour of the U.S. ended up in newspapers and magazines around the world. The bridge was also featured on a U.S. postage stamp in 1998 and has been a star in movies from “The Maltese Falcon” to “Herbie Rides Again” to “Monsters vs. Aliens.”

More fun facts: At least three babies—all boys—have been born on the bridge. A deer once bounded across the entire span of the bridge and around one year later, a six-foot-tall ostrich broke loose from a cargo van on the bridge, stopping commuter traffic. 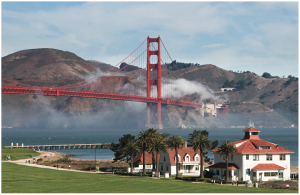 “The Golden Gate Bridge has been a symbol of inspiration, innovation, forward motion and creativity to the Bay Area as well as to the country,” says Currie.

As many a 4-year-old knows, the steel structure is the ultimate symbol of San Francisco.

To culminate the yearlong celebration of the iconic bridge’s 75th year, public officials are hosting The Golden Gate Festival—a Memorial Day weekend bash held in the spirit of the inaugural 1937 Golden Gate Fiesta. Themed “Bridging Us All,” the festival will include a historic watercraft parade, multiple music and dance stages, art installations and historical presentations, with the hub of activities taking place on Crissy Field and the Marina Green.

Activities will take place across the city, with bridge-themed events and performances scheduled at other landmarks as well, including Ghirardelli Square, Fisherman’s Wharf and Pier 39. On Sunday, May 27, the weekend will culminate in a spectacular display of fireworks commemorating the 75th anniversary in a grand finale celebration.

Tributes to the Bridge, the yearlong series of public programs, kicked off in 2011 and featured open houses, exhibits, bridge walks, runs and swims, contests and more.