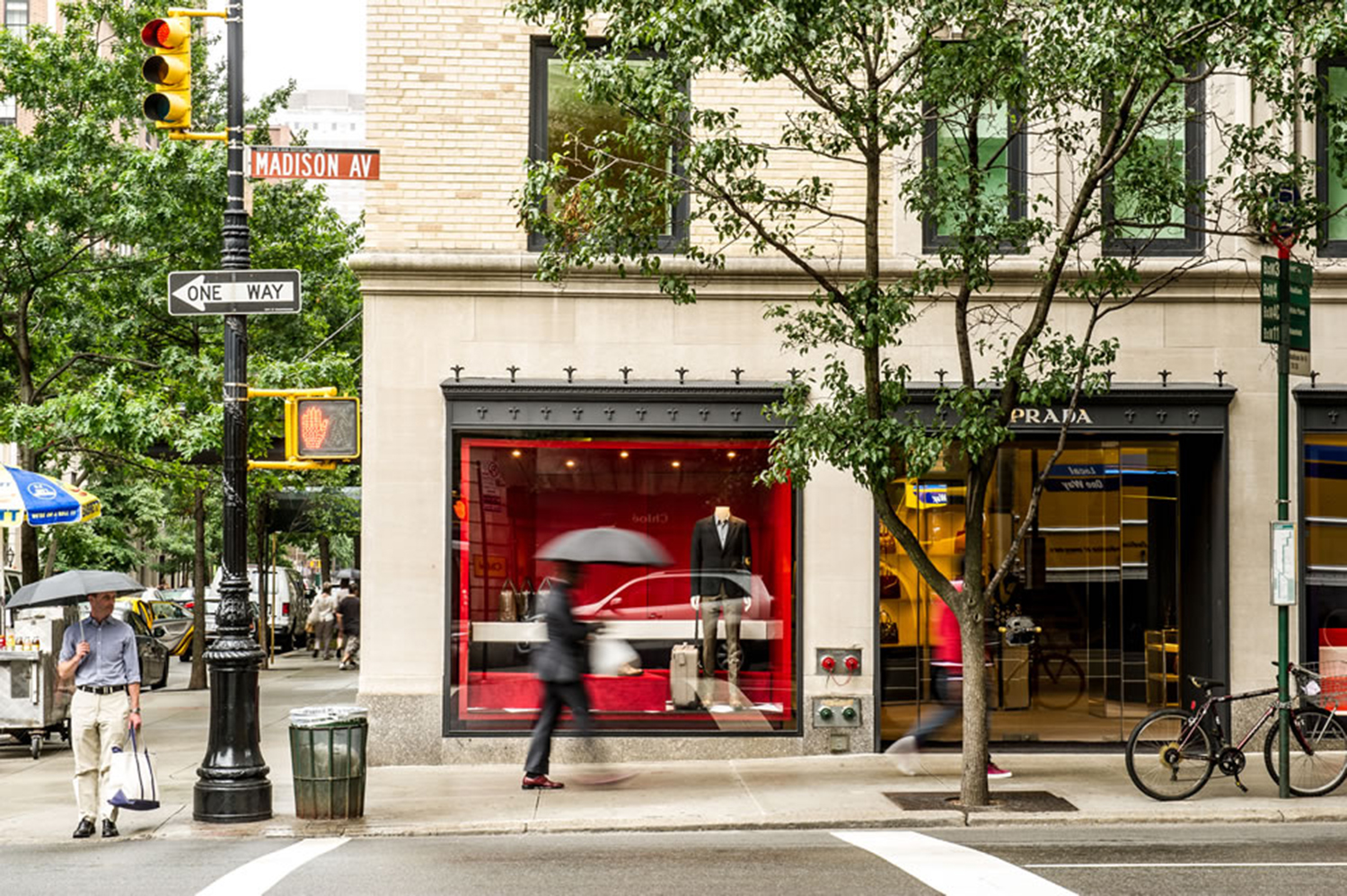 When traveling to a new place, part of the thrill is finding a special something to bring home. And with world-renowned malls and fashion districts in many of the country’s top cities, shopping becomes a must-do part of the itinerary. From major retailers and high-end luxury brands to clever vintage boutiques, there’s something for everyone. Add a distinctive setting that captivates the senses with inspired cuisine at restaurants tucked among the shops and attractions worth more than a passing glance, and you have all the elements that come together to create a perfect destination.

The intrigue of shopping Manhattan’s Upper East Side is not only due to a long, rich history of the finest luxury fashion houses found there—like Prada at 70th Street and Christian Louboutin between 75th and 76th streets—but also its distinct air of elegance.

Madison Avenue, which takes its moniker from Madison Square (named after former President James Madison), is the foremost shopping destination for any fashionable lady or gentleman while in New York. One of the oldest American brands found on Madison Avenue is Brooks Brothers. Approaching its 200th anniversary, the company is known for its loyal customers, which include U.S. presidents from Abraham Lincoln to Barack Obama.

Today, the flagship store at 44th Street and Madison Avenue appeals to the Wall Street elite and those of Ivy League pedigree. “People that come to Madison Avenue to shop are ‘dressed to the nines,’ but it’s not just for the elite blue bloods anymore as it was in the early days,” says Tom Davis, a salesman who started with the company 47 years ago and was responsible for selling John F. Kennedy Jr. his first prep school uniform. He adds that many people come to the Upper East Side to watch for trends in fashion, and he also admits to being a fan of people watching on the avenue.

A stretch of road in Chicago dedicated to fashion fanfare, premier wine and food from around the world is best known as the Magnificent Mile, transformed from an American Indian trading post in the early 1900s and inspired by the Champs-Élysées in Paris. Running along North Michigan Avenue from the Chicago River to Oak Street (the district covers a square mile), there are approximately 460 stores, 275 restaurants and 60 hotels—enough to accommodate any traveler’s shopping and entertainment desires.

The diversity found along the street is incomparable. Chicago’s conservative elite appreciate the custom-fitted suits made of fine European fabrics from the likes of J. Toor. Other favorites include a vast selection of brands with worldly origins, such as New Zealand’s Icebreaker Merino, Munich’s OSKA, England’s Barbour and Topshop, and Cop. Copine of Paris—all with wares reflecting their country’s typical motif. The Magnificent Mile is also home to the popular classics Burberry, Louis Vuitton and Gucci. 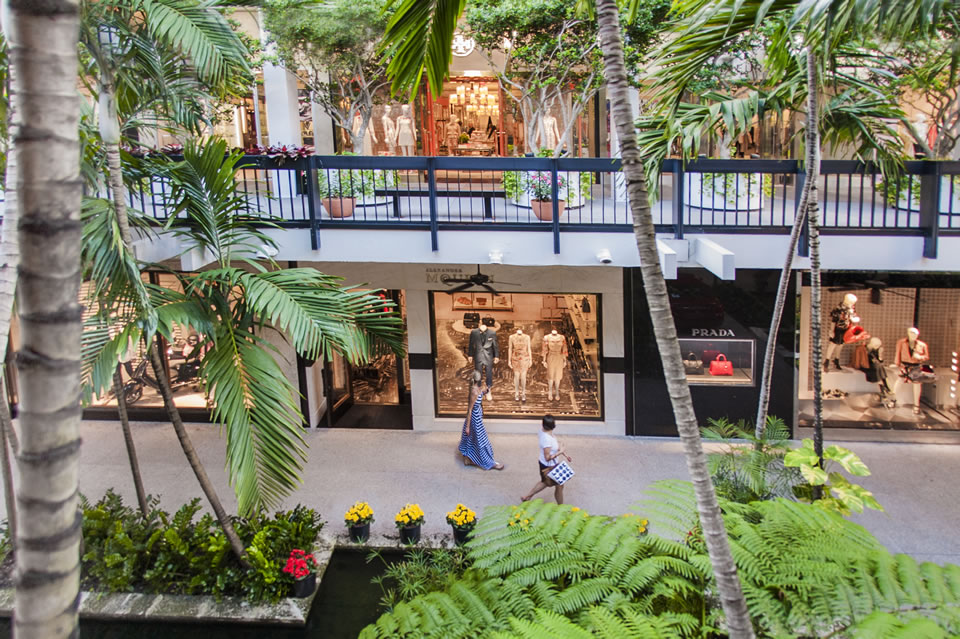 Just a stone’s throw from Miami’s sultry shores, the 50-year-old, open-air Bal Harbour Shops provides a welcome alternative to quintessential beach activities like sunbathing. Known for its lush landscaping with koi ponds surrounded by exotic tropical greenery, the luxury mall maintains a sense of serenity amid the fashion fury.

Built on former World War II barracks, the development quickly became an exclusive shopping center thanks to owner Stanley Whitman. He successfully persuaded Neiman Marcus to choose Bal Harbour for its first department store outside of Texas, and attracted boutiques previously only found in Paris or New York City.

The first to boast Chanel and Saint Laurent’s latest U.S. concept stores, and a stunning newly designed two-story Ferragamo flagship, Bal Harbour is also known for its selection of the finest boutiques for fashion trailblazers and smart shoppers seeking the next big trend. For instance, Bal Harbour’s Charlotte Olympia boutique, one of only three in the U.S., carries the full collection of Kitty & Co. flats. The coveted shoes by designer Charlotte Olympia make the shop one of the most popular shopping destinations in Miami. Patterned after a chic velvet slipper, these stylish yet comfortable shoes are embroidered with a different cat personality that gives them a distinct and clever look. 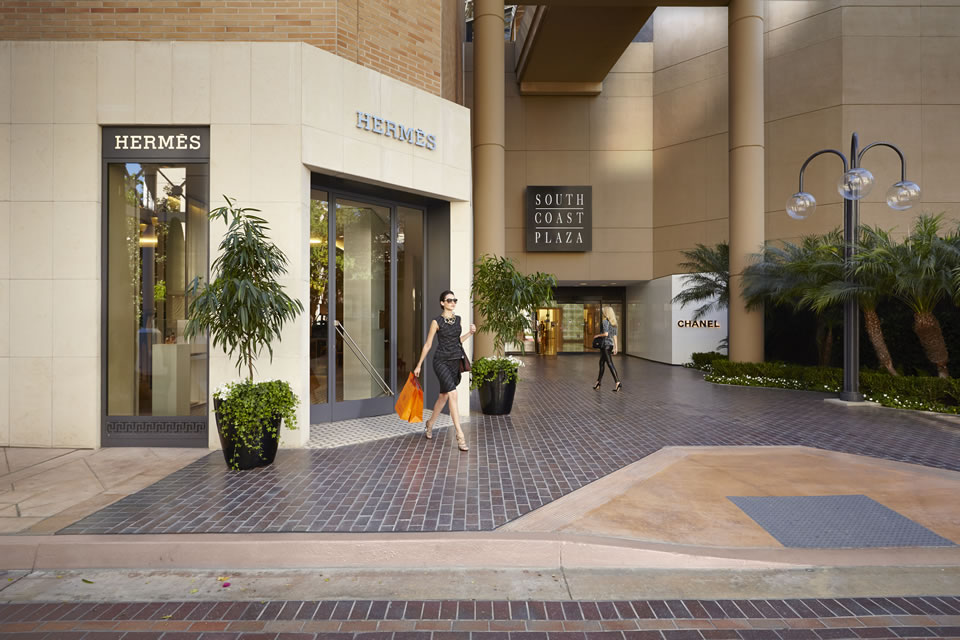 Located in the heart of sunny Orange County, Calif., is South Coast Plaza. The high-end mall houses more than 250 luxury brands—including favorite fashion brands ranging from Chloe and Prada to Valentino, as well as the only West Coast Assouline, which offers a selection of sophisticated coffee table books. Also reflecting a high level of prestige, the mall features nearly 30 exclusive jewelry and timepiece shops such as Jaeger-LeCoultre, IWC Schaffhausen, Chopard and Cartier, an unprecedented lineup under one roof.

Shoppers who work up an appetite will find that South Coast Plaza has restaurants as remarkable as its upscale boutiques. The famed AnQi by House of An features a gourmet bistro, noodle bar and thick glass catwalk running through the dining room for the many fashion shows hosted there throughout the year.

Catering to more than 22 million diverse visitors per year, the mall is known for taking guest service to a whole new level, from foreign language assistance and currency exchange to a shuttle that transports guests to and from surrounding hotels. Additionally, the private, invitation-only Access suite accommodates shoppers with separate rooms for relaxing in between purchases. A carousel and oversized bright-colored balloons ensure that young visitors will be able to experience memorable moments. All of this combines for a personal touch that allows shoppers to feel like cherished guests. 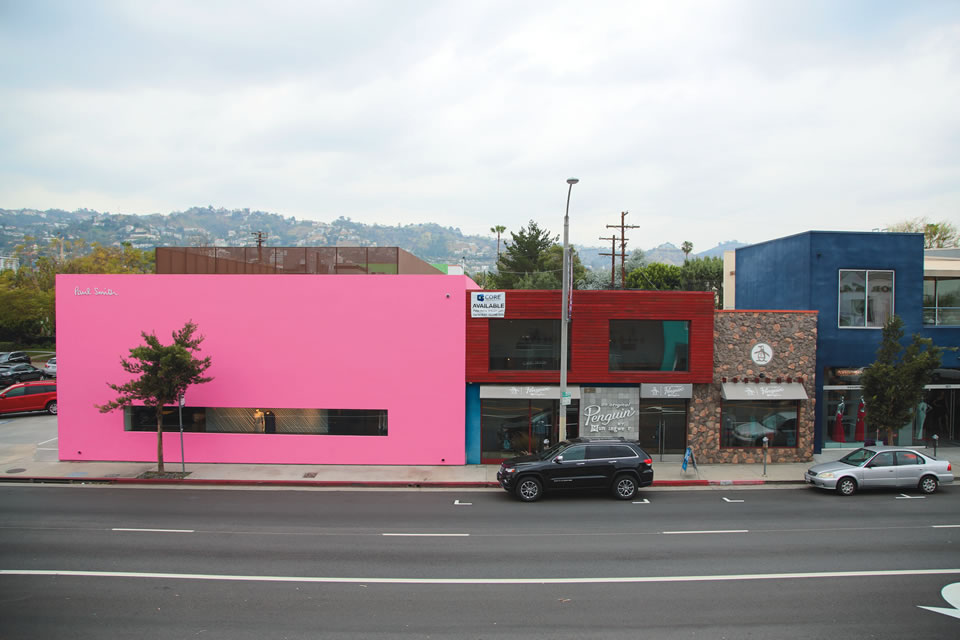 Many people often wonder where movie and television stars shop for their chic clothes. The answer is usually along Los Angeles’ Melrose Avenue, where celebrities can be spotted flitting in and out of their favorite boutiques.

With an eclectic mix of current fashion, rare vintage finds and punk rock-inspired attire, the typical Melrose shopper is a trendy youngster in search of a look recently worn on TV. Rarely disappointed with high-end offerings like Marc Jacobs and Alexander McQueen located west of Fairfax Avenue, shoppers then venture east for more daring designs at Joyrich, which carries cool 1980s graphic tees, or Posers, known for stocking every style of Dr. Martens combat boots imaginable. Stores like these make it easy to understand why shoppers travel hundreds—or even thousands—of miles to visit the Melrose boutiques.

Vintage lovers will also be pleased on Melrose: Decades, specializing in designer couture from the past, is one of the best places to find these yesteryear looks. Owners Cameron Silver and Christos Garkinos pride themselves on having created a retail haven enjoyed by celebrities and fashionistas from all over the world, including Charlize Theron and Selma Blair. “Back in the ’80s and early ’90s, the east part of Melrose was the place to shop for unique fashion,” says Garkinos, a former star of Bravo TV’s “Dukes of Melrose” series based on his store. “ … The show ‘Melrose Place’ cemented its pop culture lore.”