Shakespeare in the Park celebrates 50 years at the Delacorte Theater with a pair of crowd pleasers: “as you like it” and “into the woods.” 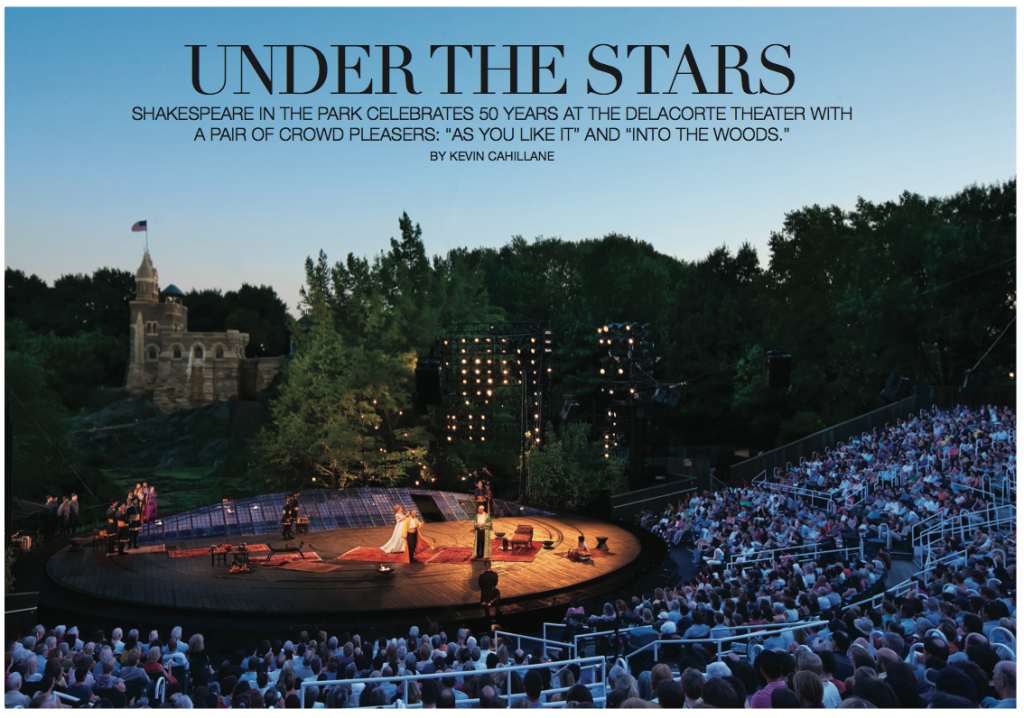 “In Sooth, I know not why I am so sad” and so it doth began. Fifty years after George C. Scott and James Earl Jones starred in “The Merchant of Venice,” the Public Theater’s Shakespeare in the Park celebrates its 50th anniversary at the Delacorte Theater with a twin bill selected to take full thematic advantage of Central Park’s pastoral setting. 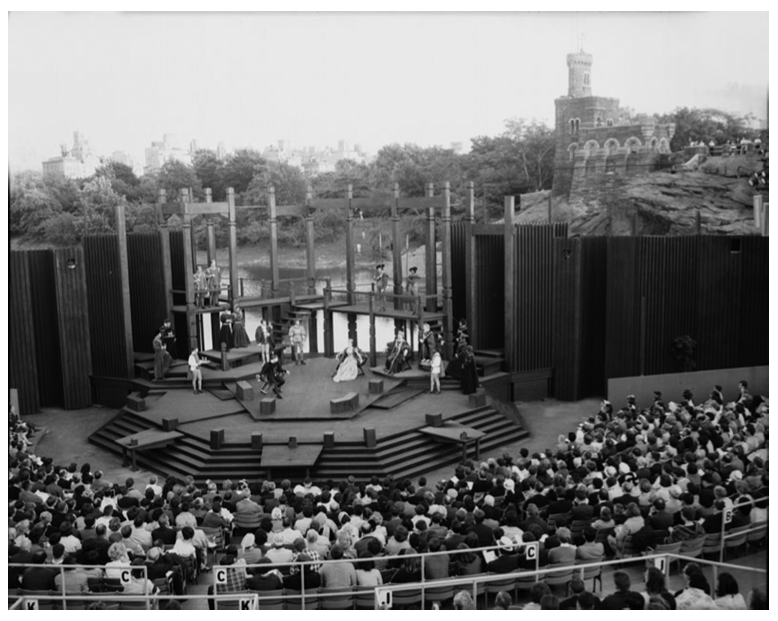 “For half a century, the Delacorte has been at the heart of New York culture, a priceless embodiment of America’s democratic promise, offering superb performances of the greatest plays in our literature, free for the people,” says Oskar Eustis, the artistic director of the Public Theater. “To celebrate, we are offering two magnificent plays about the lessons to be learned in the forest: Shakespeare’s ‘As You Like It,’ and Stephen Sondheim and James Lapine’s masterpiece ‘Into the Woods.’ ” 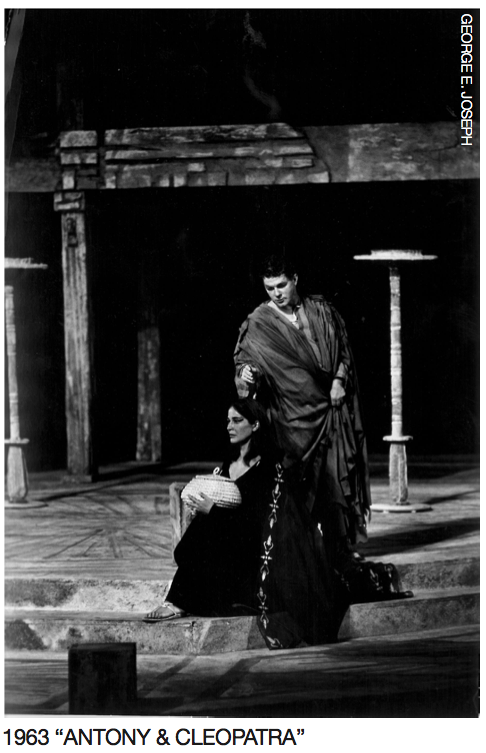 Founded by producer and larger-than-life impresario Joseph Papp, Shakespeare in the Park has been notable for big stars and outsize demand for the free tickets. Audiences queue up the day of performances for the chance to see the likes of Sam Waterston as “Hamlet” (1975), Raul Julia and Meryl Streep in “The Taming of the Shrew”

The park also seems to give as good as it gets, with many performers considering it a flashpoint in their careers. Colleen Dewhurst, the late, great actress of stage and screen who burst into the limelight as Kate in the 1956 production of “The Taming of the Shrew,” considered it something of a public trust. “I realized theater is not an elitist art; theater is for the people,” she once told critic Kenneth Turan. “I could have gone through a whole career of not having that kind of experience. I thought finally, this must be the way Shakespeare really was.” 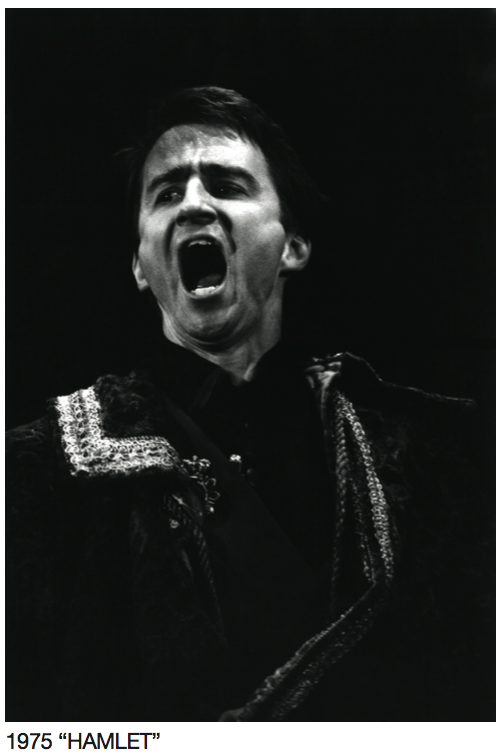 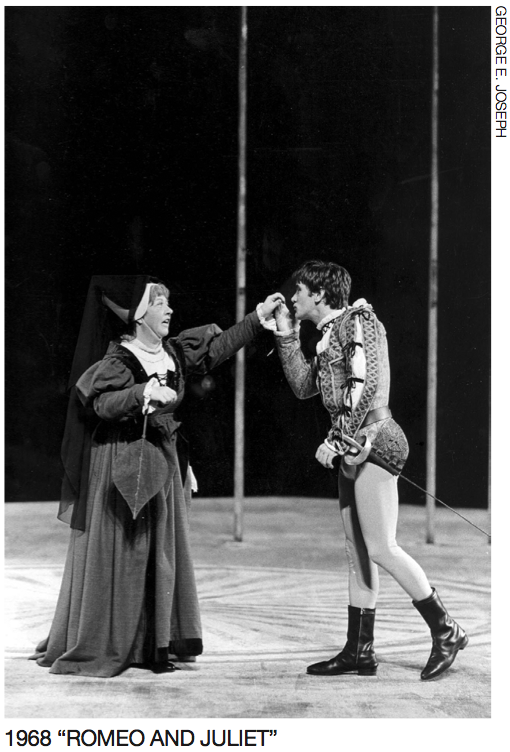 All the world’s a stage and Central Park is the Forest of Arden in Shakespeare’s comedic ensemble romp that inaugurates this summer’s 50th anniversary season. Lily Rabe stars as Rosalind, the enchanting daughter of the deposed Duke Senior, who falls in love at first sight with Orlando (“No sooner met but they looked; no sooner looked but they loved”) only to be vexed when Orlando’s scheming brother, Oliver, banishes him from the principality in a fit of pique. Thus the fledgling lovers and their assembled entourages exile to the thicket for a sprightly jaunt filled with song and many of Shakespeare’s favorite tropes: cross- dressing, mistaken identity, madness, mayhem, rage, lust, laughter, romance and tomfoolery.

For Lily Rabe, who earned a Tony nomination for her portrayal of Portia in “The Merchant of Venice,” the chance to return and play another of Shakespeare’s most beloved heroines is, well, fraught. 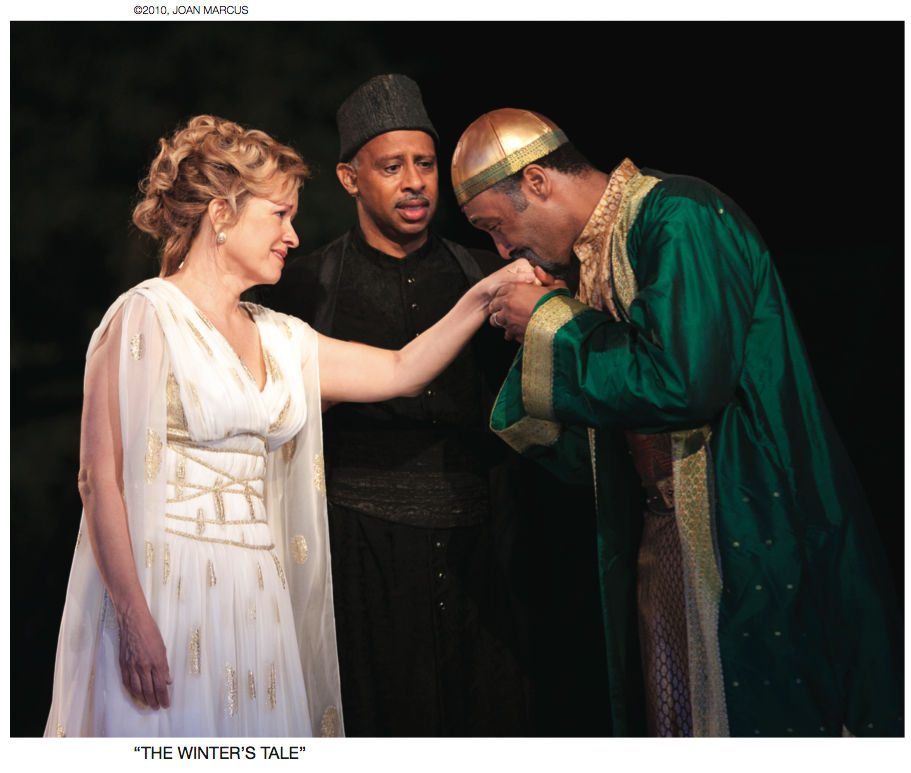 “I’m terrified. Yes, absolutely,” she says by phone as a taxicab negotiates her to her evening performance of “Seminar” at the Golden Theater on Broadway. “Like Portia, Rosalind is just one of those unbelievable roles that you just hope to get to play in your lifetime. So to be going back and to play two of the greatest parts that have ever been written is beyond. It’s so lucky and so dreamy and yes, totally terrifying, but there’s no way to complain about it. It’s a beautiful thing to get to do.”

While Portia was her breakout role, Rabe is a child of the craft. The daughter of late actress Jill Clayburgh and playwright David Rabe (who Joseph Papp called “the most important writer we’ve ever had”), the young actress grew up in New York and says performing in the park has liberated her from oversensitivity to perceived rudeness and general cacophony. “Forget cell phones, there’s planes flying over you, there are kids screaming in the background, there are touch football games going on,” she says. “That was a wonderful thing for me, that ability to be a little less delicate.”

As with “Merchant,” Rabe will perform under the direction of Daniel Sullivan, who has helmed some of the more critically lauded shows in the park of late, including “All’s Well that Ends Well” and “Twelfth Night.” With Sullivan on board, producers had Lily Rabe at hello. “To get to work with Dan Sullivan is just the luckiest thing in the world,” she says. “There’s no director who knows me better and we have such a wonderful language and shorthand together. Going in, he has my heart and soul in the palm of his hand, and then we just sort of go to work.”

The play, which has often been re-imagined to capitalize on contemporary mores, will be set in the American south in the 1840s and utilize original music written by Steve Martin—yes, that Steve Martin, the inveterate funnyman, actor, author and playwright who is likewise an accomplished banjo player and 2010 Grammy Award winner for Best Bluegrass Album. Ever the comedian, he has been tweeting updates on his “collaboration” with the Bard, with gems such as: “Shakespeare late, again, for songwriting session for Shakespeare in the Park. He did 37 plays, but I’ve done 37 films” and “Shakespeare keeps waggling his ‘Shakespeare in Love’ Oscar at me. I battle back with bluegrass Grammy. He scoffeth.”

“As You Like It” begins previews on Tuesday, June 5 and continues for four weeks through Saturday, June 30. 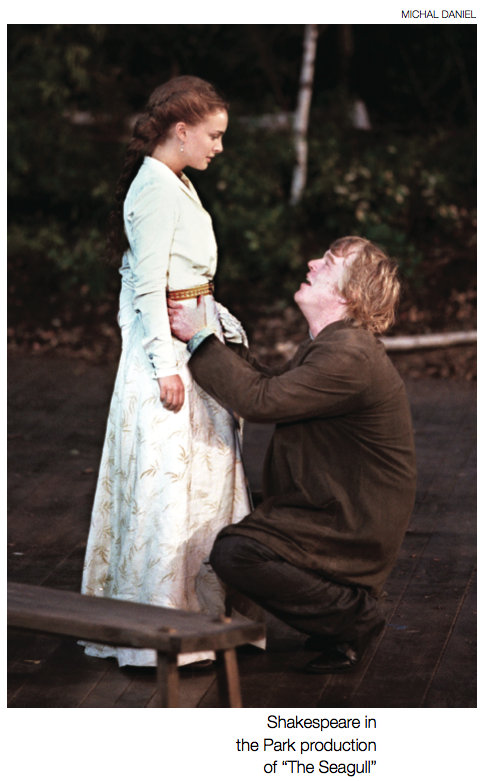 “Into the Woods” on a Midsummer Night

It may not be Shakespeare, but its pedigree is perhaps equally estimable. With music and lyrics by Stephen Sondheim (“Company,” “Sweeney Todd”) and book by James Lapine, “Into the Woods” premiered on Broadway in 1987 and won three Tony Awards, including Best Book, Best Score and Best Actress in a Musical for Joanna Gleason.

The popular play draws on characters from several beloved Brothers Grimm fairy tales, including Cinderella, Prince Charming, Jack and the Beanstalk, Little Red Riding Hood and Rapunzel, and sends them careening through the busy woods in the service of their own wishes. Add a cursed baker, his childless wife (Amy Adams) and diva witch (two-time Tony winner Donna Murphy) to the proceedings, and it might sound like a recipe for confusion, but alas, the songs carry the plot breezily from once upon a time through ambivalent ever after.

Directed by Timothy Sheader with co-direction by Liam Steel, and based on Regent’s Park Open Air Theatre London Production, the casting of Adams gives this version the A-list enchantment sure to bestow additional company to your ticket line. Still, one man looms largest over any production of “Into the Woods”—Stephen Sondheim.

“I’m delighted that we are adding Stephen Sondheim to the Delacorte’s roster,” Eustis says. “Our greatest artist of musical theater will sit very comfortably next to Shakespeare. Sondheim in the Park has a good ring to it.”

“Into the Woods” begins previews on Monday, July 23 and continues for five weeks through Saturday, Aug. 25. 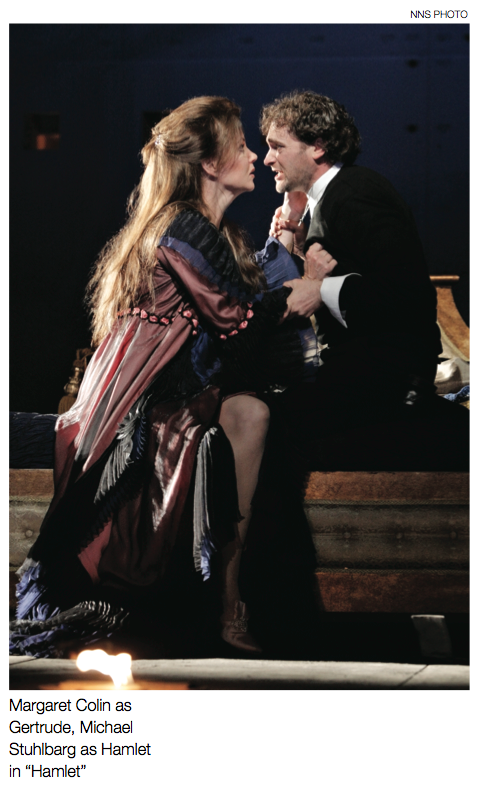 Tickets to Shakespeare in the Park are free, with each person receiving two tickets at the Delacorte Theater in Central Park the day of the show. While the tickets themselves are allocated around 1 p.m., the line begins to assemble many hours prior. The best bet for getting these hard- to-come-by tickets is to arrive before 9 a.m. with friends, chairs, blankets, a picnic basket and a positive attitude. Whether tickets are to be or not to be, those lucky enough to gain admittance will partake in one of the great New York theater traditions.

To be sure, there are other methods to avoid the madness. The Public Theatre offers a virtual ticket lottery at shakespeareinthepark.org, where hopeful theatergoers can sign up the day of the show before 1 p.m. The chosen few will be notified by 5 p.m. via e-mail. The stand-by line is another option, where tickets are distributed one per person after the regular tickets are forgone.

For those who prefer to pay for the privilege, they can opt for Summer Supporter Tickets. The fully tax-deductible contribution of $175 entitles each supporter to one reserved seat for either production. Supporter contributions help to underwrite free Shakespeare in the Park productions.

When asked about the thousands of theatergoers who patronize Shakespeare in the Park summer after summer, Rabe is struck by their interest and passion. “They’re the best audiences in the world,” she says. 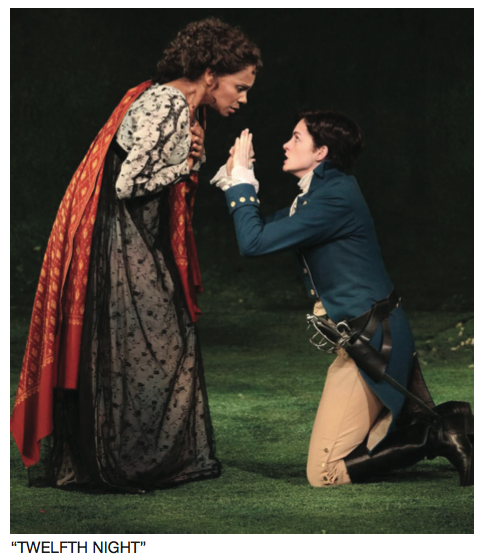 SHAKESPEARE AND THE ST. REGIS

The St. Regis concierge team can help make your Shakespeare in the Park experience all the more bespoke. While they can’t make the tickets any more complimentary, they would be happy and willing to assist you in entering the online ticket lottery.

For the performance, they can provide all the comforts from a warm blanket to a lush banquet, according to Robert Geist, the assistant chef concierge. “A picnic basket can be arranged through our in-room dining as a better and more gourmet option to the food choices at the venue itself,” he says.

From there, it’s a walk in the park or, if you prefer, the concierge can arrange transportation over the river and into the woods. For merry wanderers of the night, staff can recommend and make reservations at fine restaurants and nightspots around the city. The world is thine oyster.