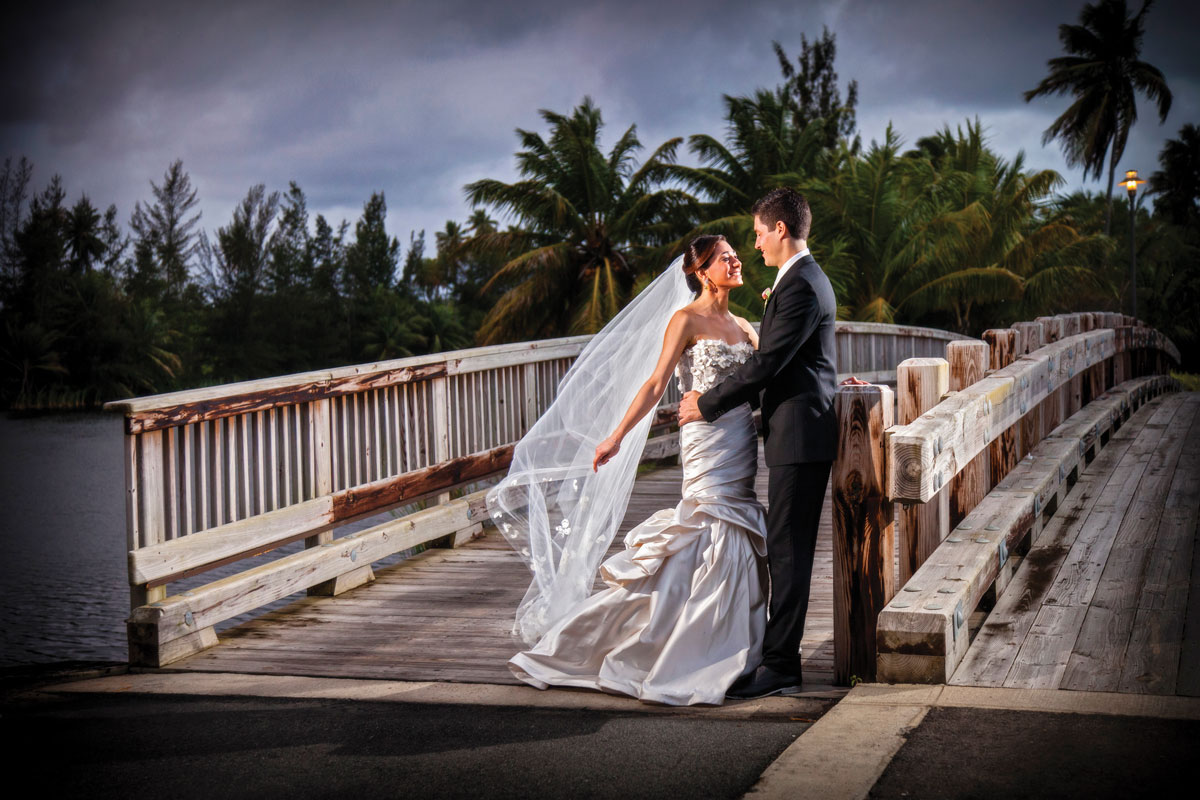 A History Of Love 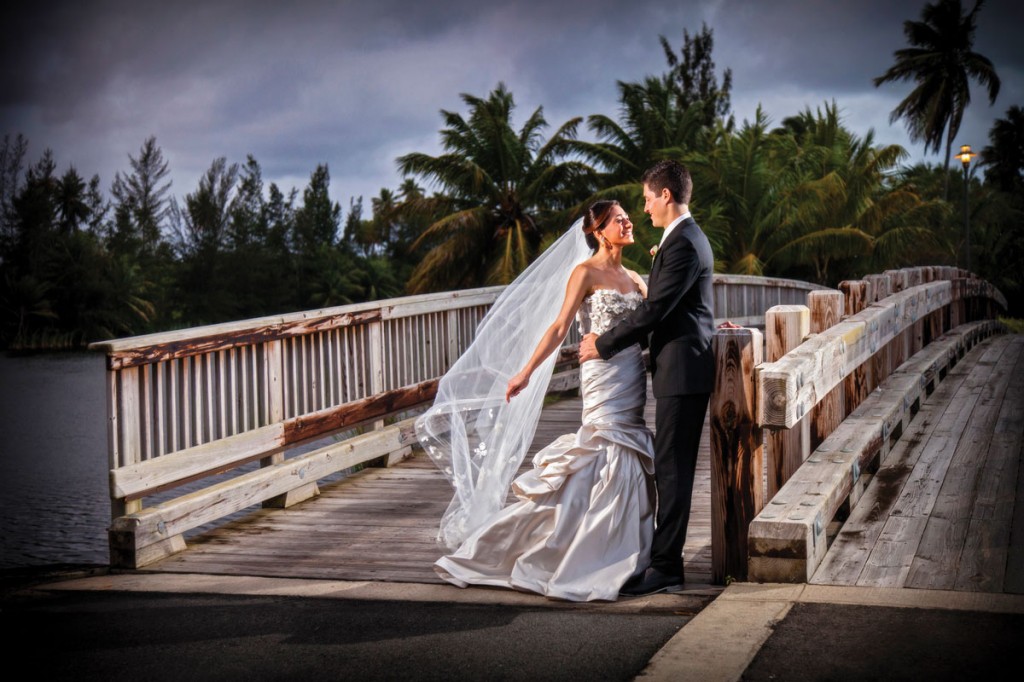 For many brides to be, Puerto Rico qualifies as a dream wedding location simply because of its beauty. For Sara Gashti, though, her wedding with soon-to-be husband Antonio Faria in Puerto Rico meant much more.  As the home country of Antonio’s family, and also the place where the couple became engaged, the island of Puerto Rico holds a meaningful place in her heart. Of course, the lush tropical beauty and friendly culture didn’t hurt either. Throughout the planning process, Sara looked forward to sharing both with her family, who traveled from Iran for the celebration, as well as the couple’s friends.

Sara and Antonio met in school while obtaining their MBAs in Barcelona, Spain, and were a natural match, quickly growing close. While dating, they visited Puerto Rico together for the first time, where Sara met Antonio’s family and fell in love with the country. Since the first trip, she begged Antonio for a return visit. Once their educations were completed, the couple moved to New York together and planned another trip to Puerto Rico that June. After a wonderful day spent exploring Flamingo Beach with his family, Antonio suggested a sunset walk on the beach, where he surprised Sara with a beautiful proposal and ring. She happily accepted and the couple quickly started wedding planning. It seemed only natural to hold the wedding in the place that had brought them so much happiness: Puerto Rico. “I love the island and the culture,” Sara says. “A lot of hotels felt generic, but The St. Regis Bahia Beach Resort felt so rich with trees, flowers and birds that it seemed more representative of how Puerto Rico actually is.” Once the venue was set, Sara and Antonio returned to New York and relied on the help of Antonio’s mother and sister for much of the planning. They also enlisted the help of well-known wedding planner Babi Diaz, one of the country’s most exclusive and experienced event professionals. 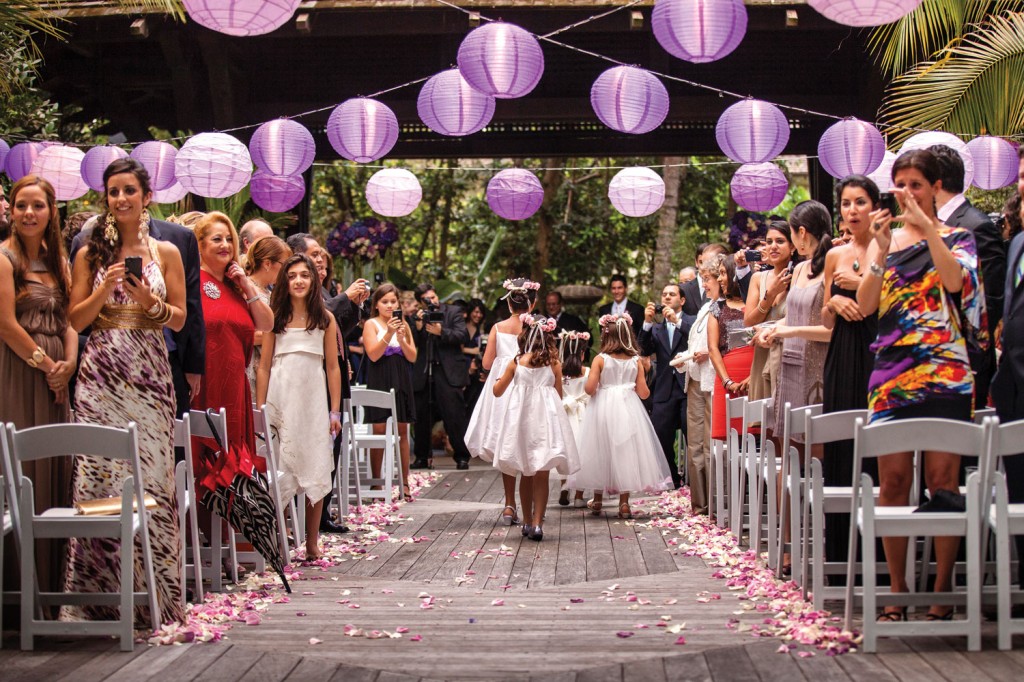 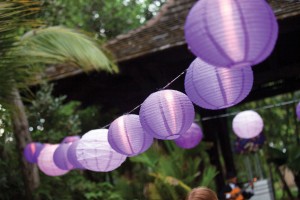 Geraldine Farrulla, director of catering and convention services for The St. Regis Bahia Beach Resort, worked very closely with Sara throughout the planning process and thinks the couple’s reasons for selecting the resort for their March 31, 2012, wedding were three-fold. “First, the parents of the groom are from here, so they were aware of all their options,” Farrulla explains. “They wanted simple, intimate, and they wanted to be outside. They both have great attention to detail and loved the simplicity and natural beauty of our space. They wanted the best Puerto Rico had to offer.”

At The St. Regis Bahia Beach Resort, the staff strives to meet and exceed the needs of every guest, but that philosophy goes into overdrive when it comes to wedding planning. Sara was very happy with how the resort and staff assisted in the planning process. “Dealing with the hotel was the easiest part [of long distance planning],” she says. “The culture of the hotel is very customer service-oriented, so it was easy, and I was very comfortable. Gerry was very helpful and the whole staff was wonderful.”

The St. Regis Bahia Beach Resort offers a variety of ceremony and reception locations. “We’ve got incredible settings,” Farrulla says. “There’s a lot of flexibility to be indoors or outdoors, under a canopy of trees or have a view of the 18th hole.” Sara originally planned for her ceremony to be held on the beach, but the day of the wedding brought high chances of rain. Not wanting her guests to be caught in a downpour between the ceremony and reception, she and her team made the decision to hold the 5:30 p.m. ceremony on the Astor Terrace. “It’s a patio surrounded by trees and flowers; a very unique and beautiful space,” Sara says. The new location, Farrulla says, may have actually worked out better for Sara and Antonio, who were having two ceremonies: a Christian service followed by a traditional Persian service. 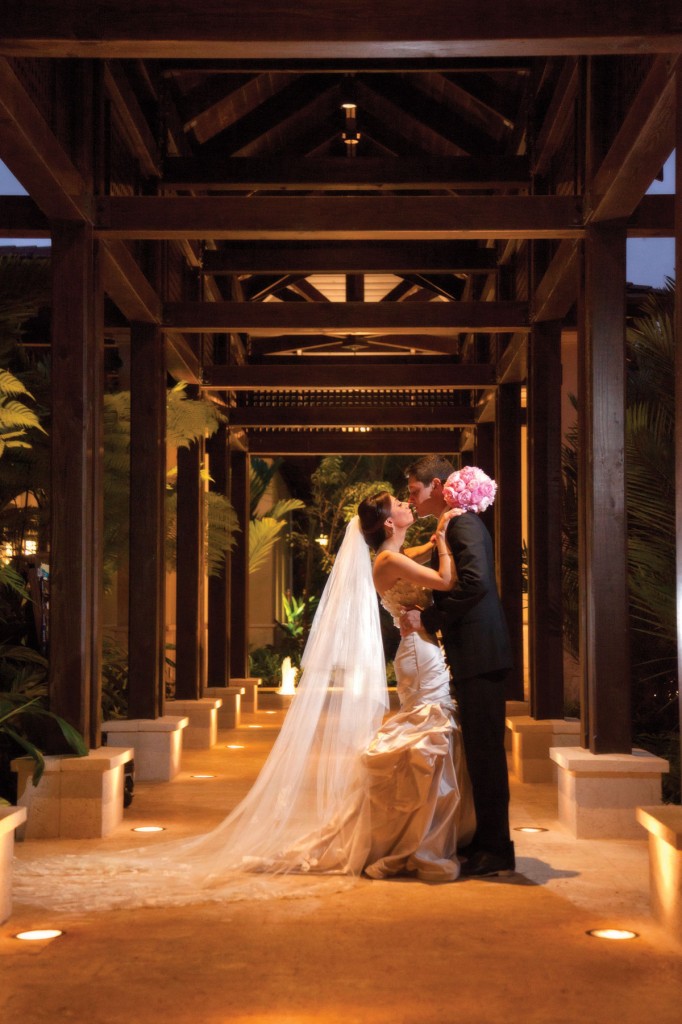 “The Astor Terrace is a beautiful wooden terrace constructed of wood brought from the Amazon,” Farrulla continues. “It’s built around trees that create a canopy that’s very beautiful. We set up the whole Persian display in the Astor Pavilion, which is covered. It included a table full of food, sweets and a big mirror that her mother had brought and it looked beautiful.” Despite the last-minute changes, the bride maintained her composure. “I was so calm on the day of,” Sara says. “I don’t know how I was so calm, but I was happy that everyone who I wanted to be there was there.”

That afternoon, in front of 150 guests, Sara walked down the aisle wearing a two-piece Monique Lhuillier gown with lace and floral details, and a dramatic veil featuring subtle hand-stamped flowers and small sequins. Waiting for her at the altar was Antonio, six groomsmen in black suits, and six bridesmaids in navy dresses with flower detailing. The bridal party, Sara says, was a mix of friends and family that represented all the different stages of her and Antonio’s lives.

The Christian ceremony was officiated by a reverend that knew Antonio’s family very well, which was a special touch, Sara says. Once the couple was pronounced man and wife, it was on to the second ceremony of the day, just steps away under the Astor Pavilion. “My brother officiated the Persian ceremony,” Sara says. “He explained each step of the ceremony to the guests, most of whom had never seen a Persian ceremony.”

With both ceremonies concluded, it was on to a sumptuous cocktail hour for guests and photography time for the bridal party. Outside the Astor Ballroom, guests snacked on codfish fritters, sweet potato croquettes with shredded pork and guava sauce, seafood paella risotto balls, sweet plantain and artisanal cheese kebabs and ropa vieja. “We tried to mix local flavors in with flavors people would be familiar with,” Farrulla explains.  “There was a big selection of hors d’oeuvres.”

At 8 p.m., as the rain began, the Astor Ballroom opened, kicking off a reception that lasted until the early morning hours. The bride was thrilled with the look of the ballroom and the decor provided by Arquetipo. “Because everything had been planned for outside, it had to be changed at the last minute to fit inside the ballroom,” Sara explains. “I had selected specific table lighting, which they brought in and it made for very soft, romantic lighting. We had all small, multiple arrangements in different colors [on tables]. The ballroom is so elegant and glamorous on its own, [so] it all worked out perfectly.” “Arquetipo is well known and very creative,” Farrulla adds. “They know our property well, so everything is always in harmony, very elegant and understated.” 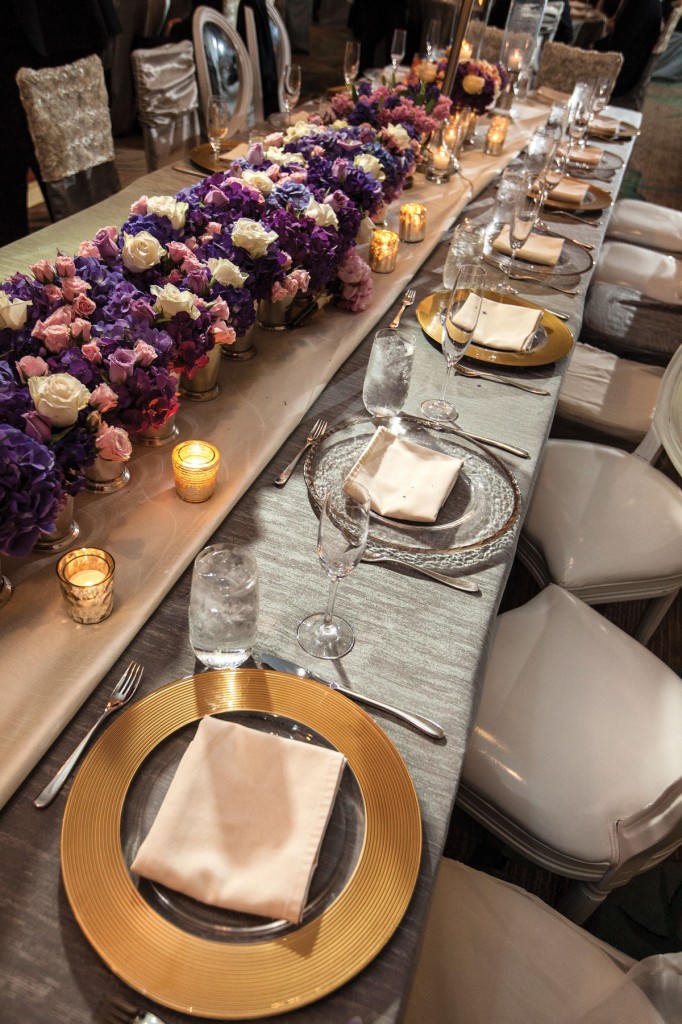 For dinner, guests selected food from different stations, including a salads and ceviche station, which featured individual portions of mixed seafood ceviche, a spinach salad with tropical fruit vinaigrette and a diced local root vegetable salad. A carving station offered roasted pork loin stuffed with plantains and pancetta, Angus beef strip loin on yautia puree with barolo mushroom sauce, and lemongrass and coriander-crusted red snapper; additionally, a station of sides provided orzo pasta al pescador and a pasta chef mixing guests’ selections into bowtie pasta. Dessert included a tiered vanilla- and red velvet-flavored wedding cake, and both white and dark chocolate fountains.  “There was just tons of food,” Sara says. “Lots of people said it was the best food they’d ever had at a wedding. I’m a foodie myself, so one of my main focuses was having a great selection. It was way beyond my expectations.”

Between bites from each station, guests danced to music from the live band Anibal D’ Gracia and Batukealo, who played a variety of music with lots of salsa and meringue. During the band’s breaks, disc jockey Joel Lopez played Persian music, ensuring that both families had a chance to celebrate with familiar sounds. “Around 11 p.m., as some people were winding down, the band had three entertainers come out dressed in a carnival theme,” Sara says. “They threw masks and hats and necklaces, and it was so fun. They re-ignited the party—from then on it was all dancing.” When the band packed up at midnight, the DJ took over, with no break in momentum. The celebration continued until 2 a.m. 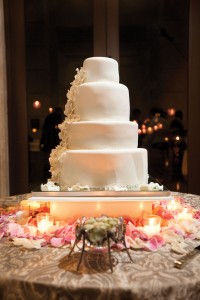 That’s typical for Puerto Rican weddings, Farrulla says, making this one a huge success. “In Puerto Rico, weddings are typically very festive. You don’t want guests sitting too long; you want people moving and having fun the whole time.” Sara and Antonio stayed in Puerto Rico for 10 days after the wedding to spend additional time with their families. “They did an amazing job,” Sara says, thinking about her wedding at The St. Regis Bahia Beach Resort. “The attention to detail they had was spectacular. I got everything I asked for and more.”