The New Year is a time for celebrating the future while also honoring the past, as reflected in the holiday’s many festive traditions. Whether it’s a dazzling firework display followed by a countdown at midnight on New Year’s Eve, or a community parade that celebrates love and life on New Year’s Day, crowds gather to commemorate the annual change through a wide variety of special events. With major cities across the country throwing their own unique celebrations, it’s easy to ring in the New Year in your own neighborhood—but don’t rule out traveling to some of the nation’s biggest bashes to celebrate in style.

While it may be only in its fifth year, Chicago’s Annual Resolution Gala has quickly made a name for itself as a spectacular, upscale way to ring in the New Year. Located right on Lake Michigan, the gala is held in the Navy Pier Grand Ballroom, where guests can enjoy incredible panoramic views of the fireworks show over the lake from the ballroom’s oversized glass windows. The stunning Lakeview Terrace, just outside of the ballroom, also provides sweeping views of the Chicago skyline and a chance to take a ride on the pier’s famous Ferris wheel. With food, champagne and a dance floor, you’ll be hard-pressed to find another site in Chicago offering such a luxury experience.

A new option in the city, Chi-Town Rising is the Windy City’s first outdoor New Year’s Eve bash. The celebration offers an opportunity to be a part of a tradition in the making, and features live bands and a fireworks display launched over the Chicago River.

Las Vegas plays host to one of the biggest New Year’s Eve celebrations in the U.S. (Photo by Mark Damon)

Known as a hot spot for partying year-round, it’s no wonder that Las Vegas hosts one of the most massive New Year’s Eve bashes in the country. Known as America’s Party, the celebration is held both on the Las Vegas Strip and downtown on Fremont Street.

“Everything is always bigger in Las Vegas, especially New Year’s Eve,” says Amanda Arentsen, communications manager for the Las Vegas Convention and Visitors Authority. “Each year, America’s Party proves to be one of the biggest and best celebrations in the world with incredible fireworks displays and world-class entertainment.”

Now in its 17th year, the event draws a crowd of over 300,000. The fireworks on the Strip are the highlight of the night, firing off this year from Aria, Caesar’s Palace, MGM Grand, Planet Hollywood, the Stratosphere, Treasure Island, The Venetian and Rio in an over-the-top extravaganza that is sure to impress.

People around the country tune in annually to watch live broadcasts of the Rose Parade in Los Angeles, but there’s nothing like seeing the event in person. Members of the Pasadena community come together at the end of each year to help decorate the parade floats, incorporating millions of flowers. The result is a beautifully colored parade filled with daisies, roses, marigolds and more—a truly unique experience to celebrate life in the New Year. Each event also features its own theme; the 2017 Rose Parade theme will be “Echoes of Success.”

Typically held on New Year’s Day, the parade will take place on Jan. 2 in 2017 in keeping with the Tournament of Roses’ “Never on Sunday” tradition, which began in 1893 as a way to avoid frightening the horses that used to be hitched outside churches on Sunday. Now in its 128th year, there’s no doubt that the tradition of the Rose Parade will be sticking around for a while, although horses are no longer a worry. 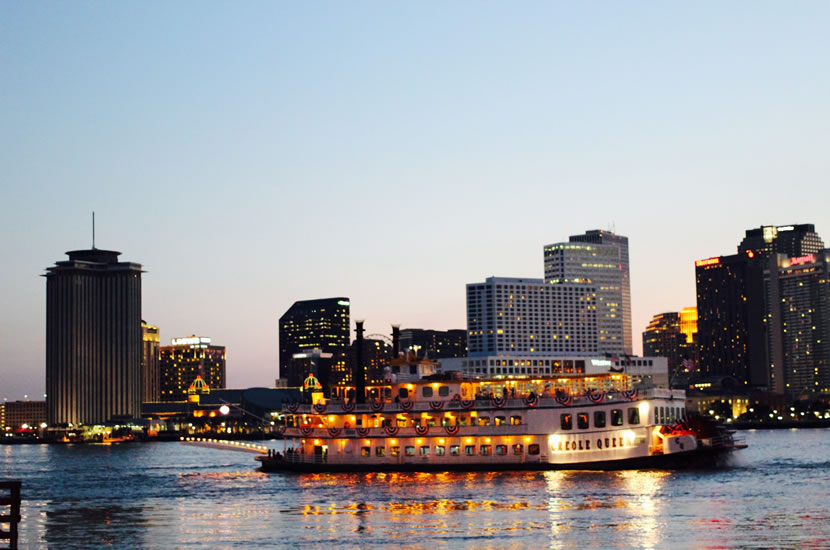 Celebrate the New Year with Southern style in New Orleans. The city hosts a variety of events for the holiday, including a fireworks show over the Mississippi River. For a unique way to watch and an authentic NOLA experience, take a ride one of the city’s famous paddle-wheeler boats, like the Creole Queen.

In addition to the unparalleled view of the fireworks display, the evening includes a variety of delicious hors d’oeuvres with cocktails and Champagne from the open bar, as well as the opportunity to dance your way into the next year.

Fireworks cruises have steadily gained popularity in Louisiana as a dazzling way to ring in the New Year. Hop on board a couple of hours before midnight and grab a front-row seat to the show on the boat’s upper deck for the clearest look at the sky. Live entertainment will continue beyond midnight before the ship makes its way back to the dock.

The famed ball drop in New York City is possibly the most well-known New Year’s Eve tradition in the world. Around a million people gather in Times Square each year to watch the 11,875-pound, Waterford crystal-covered ball drop—a remarkable number considering that its journey lasts for only a minute. “At a time when the world often seems more angry and divided than ever, the New Year’s Eve celebration in Times Square is notable for the way in which it is a singular moment of joy when the world truly celebrates together at the crossroads of the world,” says Tim Tompkins, president of the Times Square Alliance.

The first Times Square celebration, held in 1904, featured an all-day street fair and a fireworks display, but the ball didn’t come until three years later. After the city banned the fireworks show, the event organizer decided to drop a 700-pound, illuminated ball crafted out of wood and iron. New York’s tradition has gone on to inspire similar events across the county, including a peach drop in Atlanta, a lone star drop in Houston, an orange drop in Miami and an Indy car drop in Indianapolis. Because the ball is such a prominent symbol of the annual celebration, it is now displayed over the city year-round.

San Francisco’s waterfront fireworks tradition is a classic as far as New Year’s Eve celebrations go, and continues to draw massive crowds from all around the Bay Area and beyond.

“I love starting the New Year with a bang and the city of San Francisco does that every year with a spectacular show that showers the northern waterfront with fireworks framed by the Bay Bridge and the lights of the East Bay twinkling in the distance,” says Joe D’Alessandro, president and CEO of the San Francisco Travel Association. “It’s a non-alcoholic event, which also makes it very family-friendly, and a lot more exciting than the pop of a Champagne cork in my opinion. It draws thousands of people from all over the Bay Area and for many families, including mine, it’s a tradition that is carried on from one generation to another.”

Kicking off just before midnight, the sparkling display launches from a boat between the Ferry Building and the Bay Bridge. Reflecting in the water of the bay with the bridges illuminated in the background, it’s a beautiful sight coupled with the festive music playing over the speakers near Pier 14.