If Geoffrey Zakarian had not become a chef, he might have been an economist, or channeled his creativity into music to become a concert pianist. The renowned chef—who still plays piano in his downtime—studied economics at Worcester State College, but a fateful trip sent him on a different career path. After graduation, Zakarian journeyed to France, where he spent a year falling in love with food and the culinary lifestyle.

Geoffrey Zakarian and his wife, Margaret, manage the Zakarian brand together. (Photo by Rick Lew)

“That travel through France opened my eyes to hospitality and I knew that food and cooking was for me,” Zakarian says. “I knew I had a little bit of talent with the cooking, but I loved seeing the drama unfold in the front of the house with diners coming in, the ambience, the experience. That is really what I fell in love with.”

Throughout his long and varied career, the chef, restaurateur and cookbook author has worked in some of New York’s finest restaurants, including Le Cirque, 44 and Patroon, in addition to opening a number of his own, with one of them, Country, earning a Michelin star. His latest dining establishments are both located at Montage Beverly Hills: Georgie and The Garden Bar.

Beyond his restaurant reputation, he’s also recognizable for his frequent appearances on Food Network. He keeps viewers guessing as the host of “Cooks vs. Cons,” offers advice and critiques as a judge on “Chopped” and was the season four champion of “The Next Iron Chef: Super Chefs.”

Zakarian didn’t achieve celebrity-chef status overnight. He started as many chefs do: as an apprentice. When he returned from France in 1982, he began his career at Le Cirque, developing his technical skills under the tutelage of French Master Chef Alain Sailhac. Zakarian apprenticed for free at the restaurant while studying at the Culinary Institute of America, working his way up from pastry sous chef (while creating 150 souffles a day) to chef de cuisine. His career skyrocketed from there, as Zakarian became synonymous with the New York restaurant scene.

In 2001 Zakarian opened his own restaurant, Town, which garnered a three-star review from the Times, and in 2005 Country followed, earning another three-star review. This made Zakarian the first New York chef to earn three straight three-star reviews from The New York Times. A a companion cookbook followed later: “Geoffrey Zakarian’s Town/Country,” which was called one of the best new cookbooks.

2005 was also a major year for Zakarian’s personal life: He tied the knot with his now-wife, Margaret. A former marketing executive, she is currently president of Zakarian Hospitality LLC and plays an important role in building the Zakarian brand. She spends much of her time marketing both Geoffrey and the restaurants while also contributing to restaurant concept development, contracts and the day-to-day running of the business. She played a critical role in developing and launching their new line product line—Zakarian Pro For Home—which debuted on the Home Shopping Network and HSN.com in September, as well as other Zakarian Hospitality products. “[Zakarian Pro for Home] is a line of food storage containers that is so beautiful and provides so many benefits,” Margaret says. “It actually keeps your food fresher longer. I am amazed every time I use one.” On top of everything, Margaret is also co-author of “My Perfect Pantry: 150 Easy Recipes from 50 Essential Ingredients,” along with her husband.

In 2010, Geoffrey and Margaret opened the wildly popular The Lambs Club at the Chatwal Hotel and The National at The Benjamin Hotel. Geoffrey also continued expanding outside of New York, with Tudor House in Miami and a second location of The National in Greenwich, Connecticut.

Geoffrey says he finds inspiration for new concepts and recipes wherever he goes. “I get ideas walking down the street, reading an article on politics, visiting a museum … honestly, it’s all the time.” 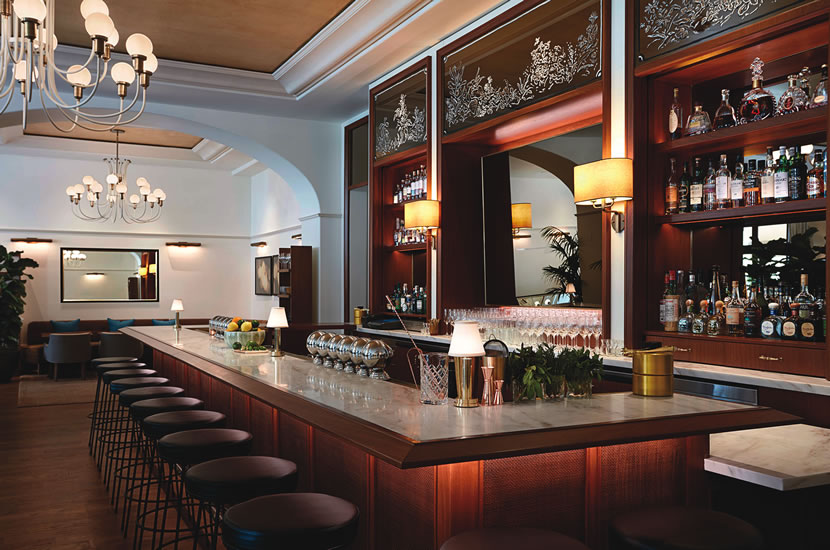 The Lambs Club is located in the Chatwal Hotel.

Geoffrey knows a thing or two about throwing together delicious dishes using only the ingredients he has on hand. “One time I was cooking cauliflower and had added some Parmesan because those were pretty much the only two things I had in the fridge,” he says. “I turned for a moment and it burned. [Yet] it was so good that it went straight on the menu at The Lambs Club.”

In addition to sharing his expertise as a judge on “Chopped” and competing in (and winning) “The Next Iron Chef: Super Chefs,” he now hosts his own show, “Cooks vs. Cons.” It features two professional cooks and two amateurs who create dishes using a mystery special ingredient, while judges and viewers try to guess which contestants are professionals and which ones are amateurs. The chef also co-hosts “The Kitchen” on Saturday mornings, where he shares recipes and tricks of the trade.

Geoffrey credits Food Network with changing the food and restaurant industry. “The amount of education that people get from watching is unbelievable,” he says. “It has made food lovers out of millions of people. That raises all boats in the world of restaurants—more people are eating out, more people are willing to try new things and diners want different experiences. This is a huge shift from 20 years ago. As a chef, it is wonderful to be able to take some chances on the menu with ingredients knowing that the customers will order and try new things. Decades ago, a restaurant menu was handcuffed a bit. If your ingredients were too esoteric, the dishes wouldn’t sell. Now, it is almost the opposite.” 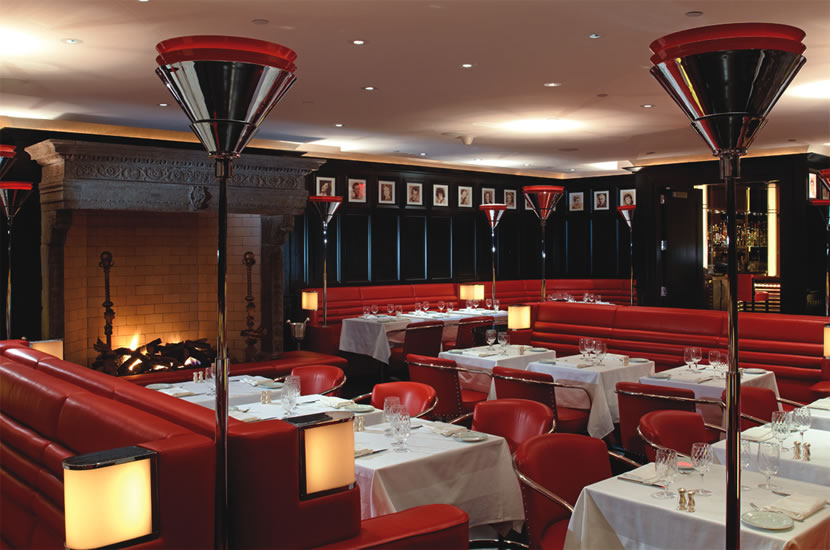 The dining area at The Lambs Club

Offscreen, food plays just as significant a role in his and Margaret’s personal life. The family loves to watch episodes of “The Kitchen” together on the weekend and the couple’s children usually want to make a few things that were featured in the episode. That’s not a surprise, though, since the pair say food is a huge part of their family. “As soon as I wake up, I race to the kitchen to start breakfast for the family,” Geoffrey says. “There is nothing better than being able to just cook for fun and to feed my family.”

“At breakfast we talk about lunch and at lunch we talk about dinner,” Margaret adds. “The children love to cook—they read cookbooks, try their own recipes out and want to always be in the kitchen. Our oldest is [even] a counselor in training at a food school for children.”

In fact, all of their three young children are working to develop their own sophisticated palates. “They really can tell quality,” Margaret says of their tastes. “They like all kinds of food—fancy and casual—but they want to have a delicious pizza, or fresh chicken fingers. They love to tell us when they think things are not seasoned properly or a place may not be clean enough. Kids are smart—you can’t fool them.”

Even houseguests are not immune to the family’s robust food culture. Their most recent guest was friend Jaret Keller, president and managing partner of Key Group Worldwide, who made peach cobbler side-by-side with Geoffrey. “Geoffrey announced that Jaret was not ‘chopped,’ ” Margaret says. “Whew, because it really would have been awkward to ask him to leave the house.” 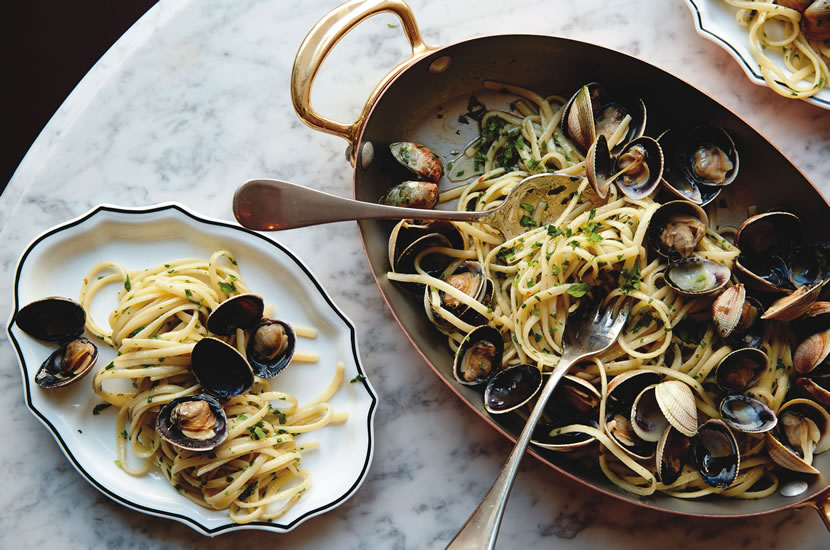 Despite his success, Zakarian still says he’s waiting for that ‘aha’ moment where he knows he has definitely made it. “I’m still looking … I’ll let you know when I find it,” he says.

Though the Zakarians just opened Georgie at the Montage Hotel Beverly Hills, which serves Geoffrey’s signature modern American cuisine, and recently launched the new product line, they show no signs of slowing down. There are still plenty more TV appearances to come, especially with “Cooks vs. Cons” currently in its third season, as well as his radio show, “Food Talk,” currently on the air, in which he speaks with industry experts and delivers a behind-the-scenes look at the culinary world, among other new ideas the Zakarians are cooking up.

“There is so much coming next, and I feel so blessed to have all of these fun projects to work on,” he says. “Stay tuned.”