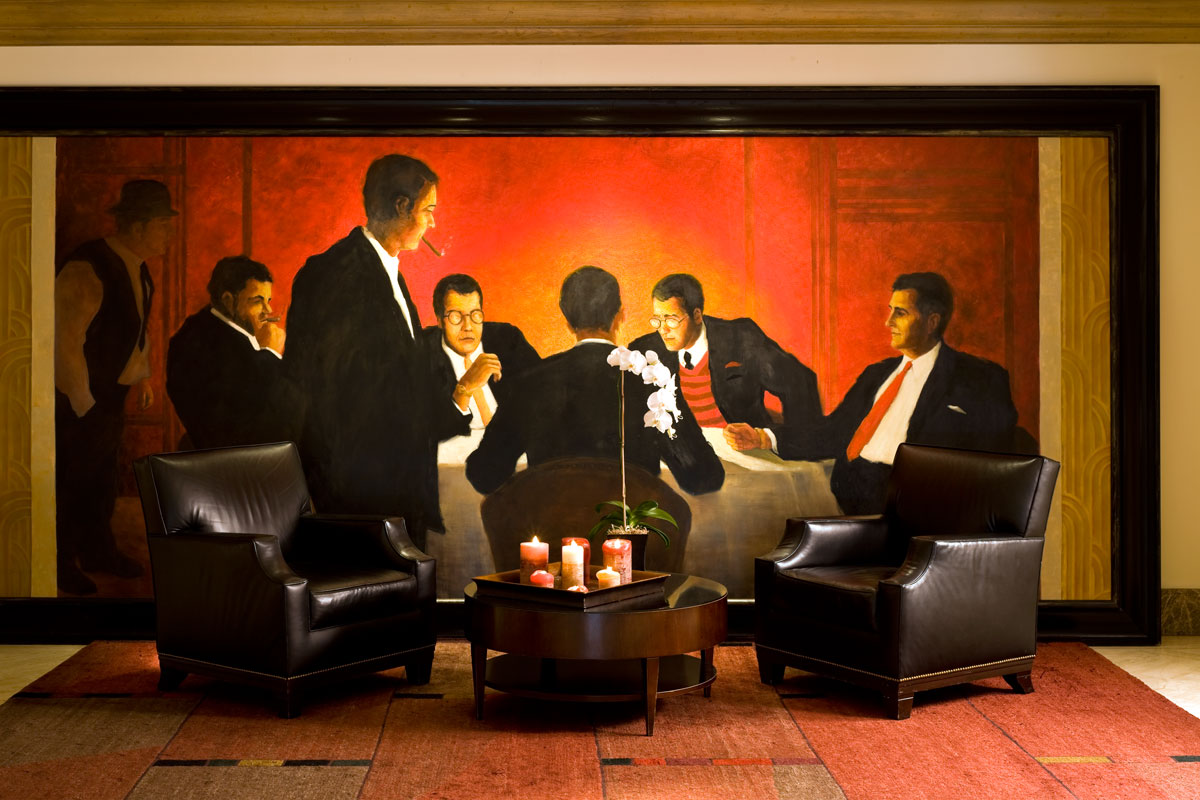 Painter Maxfield Parrish’s “Old King Cole” mural marked the beginning of one of the St. Regis’ most beloved traditions. 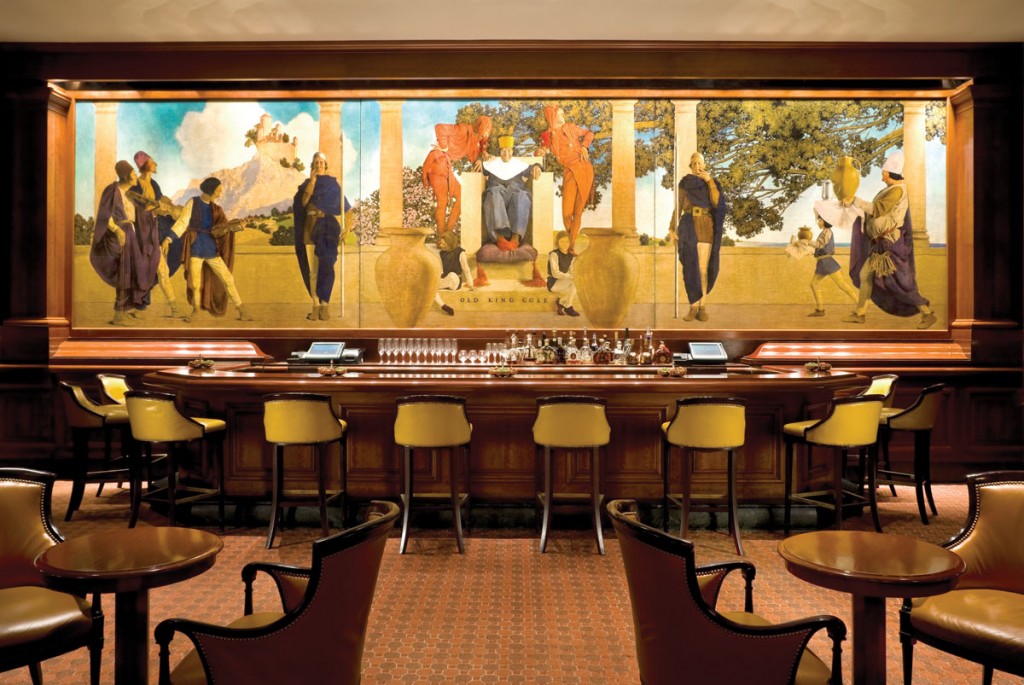 St. Regis has a rich heritage full of time-honored traditions, some dating back more than a century. Perhaps the most celebrated of these is placing a stunning mural at the centerpiece of The St. Regis Bar, providing guests an eye-catching visual experience and thought-provoking conversation piece. The bar mural tradition began in 1932 at The St. Regis New York, where the beloved Maxfield Parrish mural, titled “Old King Cole,” began its reign as the hotel’s most famous guest.

For decades, the genial king has greeted patrons of the King Cole Bar with a bashful smile, standing watch over other famous hotel guests such as Ernest Hemingway, Marilyn Monroe, Salvador Dali and John Lennon. He’s been featured in several movies and bore witness to many historic events—including the birth of the red snapper cocktail in 1934 (commonly known today as the bloody mary) and the first woman to enjoy a drink in the once gentlemen-only lounge in 1950. He’s also been the subject of a fabled rumor passed down from generations of bartenders to the eager ears of their curious patrons.

With such a storied past, it’s no wonder “Old King Cole” is so beloved—and why a beautiful hand-painted mural can be found in the bar of every St. Regis hotel and resort worldwide today. To appreciate the significance of this tradition, however, it’s important to understand the history behind the iconic mural that started it all.

All Hail the King

“Old King Cole” began its New York reign in 1905, when it was commissioned by Nicholas Biddle, a school friend of Parrish, for St. Regis founder Col. John Jacob Astor IV. The massive 8-by-30-foot painting was to adorn the bar at Astor’s 42nd Street hotel, the Knickerbocker, which fell victim to Prohibition in 1920. After the Knickerbocker was converted into an office building, the mural went into storage and moved to several locations in the city before finding its final resting place at The St. Regis New York.

“Parrish, a devout Quaker, was reluctant at first to paint a piece for a bar, but Biddle convinced him to set aside his Quaker sensitivities, a feat that was accomplished, no doubt, by explaining to Parrish that Astor was willing to pay him $5,000 for the piece—a very high price for the work of an American artist at that time,” says art historian and Parrish expert Alma Gilbert. Gilbert has written several Parrish books, including “Maxfield Parrish: The Masterworks.”

It was Biddle, she says, who suggested Parrish create an old Dutch “Knickerbocker” scene for the bar. “If you recall [a] history of New York, ‘Knickerbocker’ originally referred to the early aristocracy of New York, and thus a perfect name for the famed Colonel Astor, who was a descendant of one of the wealthiest Dutch families there,” Gilbert says.

The name was popularized in 1809 by author Washington Irving when he published his satirical “A History of New York” under the pseudonym “Diedrich Knickerbocker.” Later, it became a general term when referring to any New Yorker. When Astor insisted on being the principal figure in the composition, since he was shelling out such a large sum, Parrish decided to have a little fun with the piece.

“What the colonel did not know was that the mischievous artist had decided to paint the famous children’s fable ‘Old King Cole’ and gently poke fun at the pretenses of aristocracy by including the face of the colonel as the king, who appears to be caught in an embarrassing social faux pas,” Gilbert says. The “faux pas” is rumored to be flatulence—quite a scandal for such a prestigious and sophisticated man as Astor.

“The little story was circulated by countless bartenders to their patrons and is still known today,” Gilbert says. “When Astor’s lawyers contacted Parrish about the seemingly embarrassing depiction of the colonel, Parrish assured them in writing that his thoughts while painting it were 110 percent pure. Everybody can make anything they wish out of the painting.”

Parrish’s reassurance apparently kept him in Astor’s good graces, because he recommended the artist to friend Gertrude Vanderbilt Whitney—considered to be one of the greatest female art collectors of her time, if not in all of American history—to create a series of murals for her new residence.

When the Titanic sank in April 1912, claiming Astor’s life, Whitney asked Parrish to create a painting to be sold to raise funds for the Titanic staff who perished on the ship. “The artist, because of his association with the colonel, was happy to comply,” Gilbert says.

Setting aside his Quaker sensibilities for a kingly sum proved a wise career choice for Parrish, as it essentially launched his career. Parrish went on to create several other famous masterpieces, including “Daybreak” and “Garden of Allah,” a reproduction of which stands behind the bar at The St. Regis Monarch Beach. “During the ’20s, one out of every five American homes had a print of either ‘Daybreak’ or ‘Garden of Allah’ hanging on their walls,” Gilbert says. “He was truly one of the great American artists.”

Since the opening of the flagship St. Regis in New York, the Lobby Bar has remained the focal point of every St. Regis hotel and resort. At the centerpiece of the bar is a hand-painted mural, often by a prominent local artist. The bar murals reflect the timeless sophistication and unrivaled luxury of St. Regis, and often pay homage to the rich history of the city they reside in.

The murals are more than meets the eye—they’re part of a regal tradition that’s founded on the unique history of the St. Regis. Sitting down at The St. Regis Bar, you’ll feel that much more connected to its distinctive past. 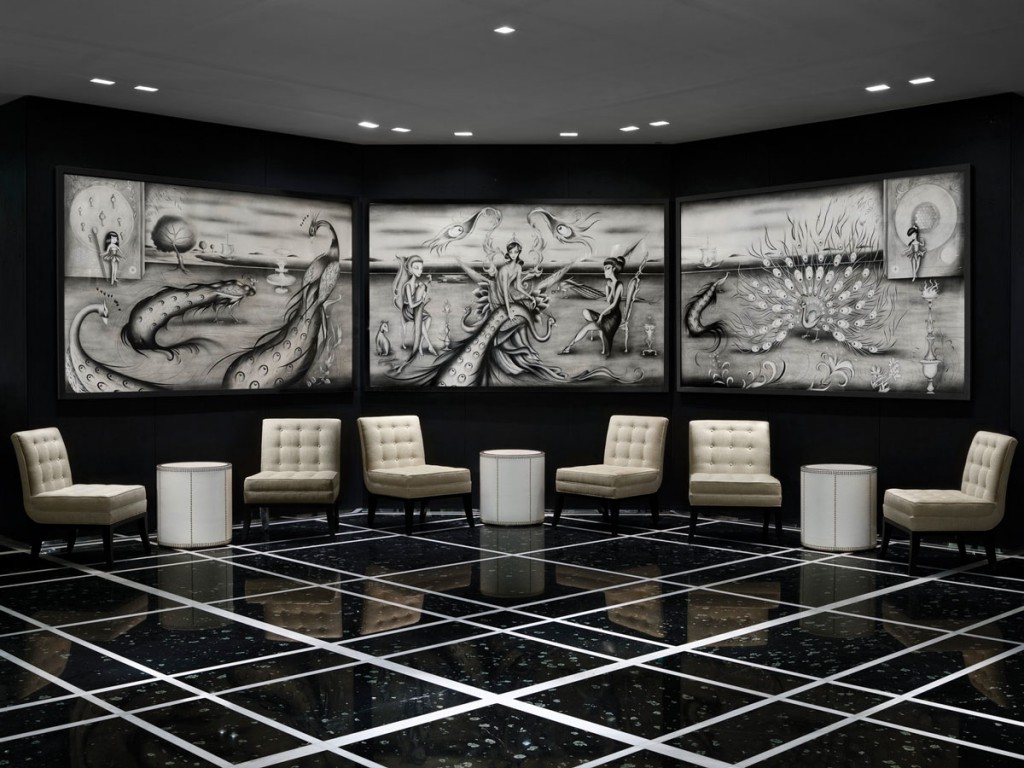 In “Eyes of the Stars,” Miami-based artist Santiago Rubino portrays an aristocratic scene of elegance and composed beauty. The three-panel graphite, charcoal and oil pencil composition depicts an imperial family discussing the mysteries of life and their endless search for knowledge, which focuses on sacred geometry, astronomy, alchemy and ancient history. A flock of peacocks evokes notions of prosperity, luxury and extreme beauty—further illuminating the themes of antiquity, beauty and discovery that are integral to Rubino’s entire body of work and to St. Regis. The subjects in the piece can be interpreted as the Lady Astors of St. Regis, inviting guests into their inner circle to share their passions for luxury and sophistication over a glass of wine, Champagne or cup of tea. 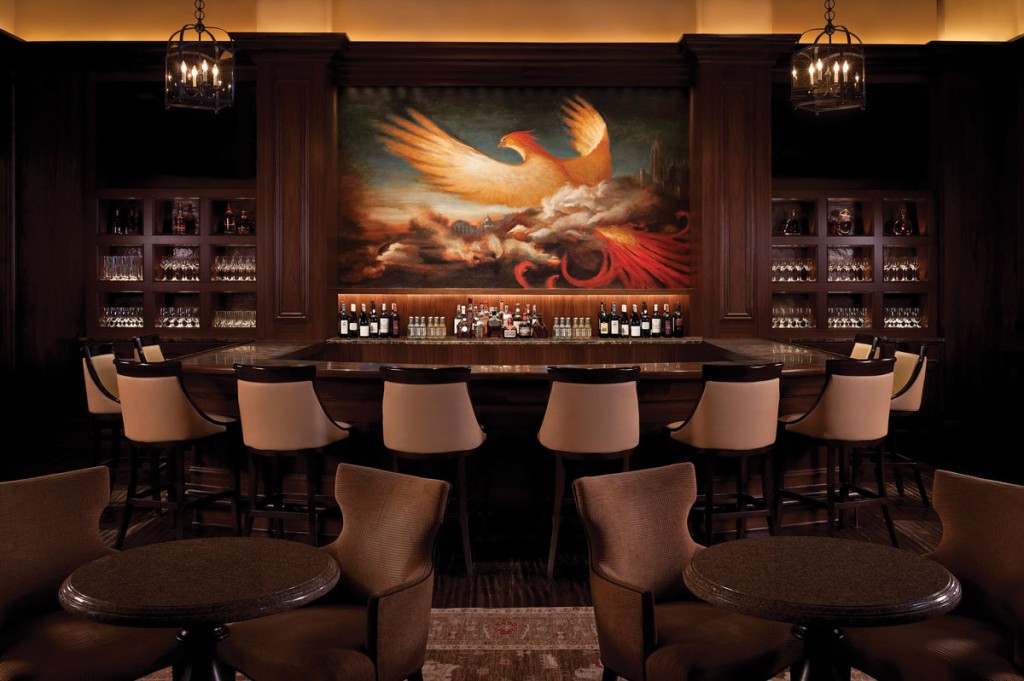 The St. Regis Atlanta features a breathtaking mural of the phoenix—a significant symbol to the city of Atlanta—titled “Resurgens” (Latin for “rising again”). Artist Claude Perreault uses the mythical firebird to depict the fall and rebirth of Atlanta after the Civil War, symbolizing both the strength of the city and the legendary sophistication of St. Regis. Under the majestic bird’s left wing lies the old Atlanta, which burned down during the war. Under the right wing is the city skyline of contemporary Atlanta, which speaks to the city’s triumphant cultural rebirth. 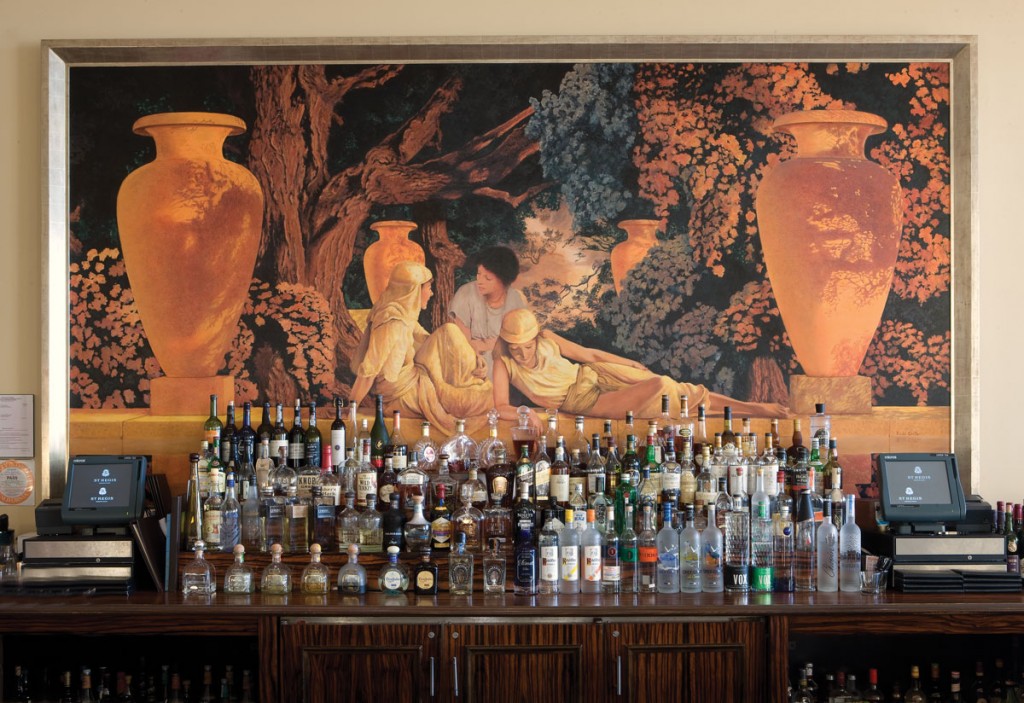 This magnificent piece is a reproduction of Maxfield Parrish’s “Garden of Allah.” The original work, which measured only approximately 15-by-30 inches, was done by Parrish in 1918 as an illustration for Crane’s Candy Co.’s candy boxes. Santa Barbara artist Russell Carter recreated the painting in its current size of more than 6-by-13 feet. In addition to his own original creations, Russell is well known for his skill in recreating paintings by masters. It was selected as a direct nod to the famed “Old King Cole” mural at The St. Regis New York. 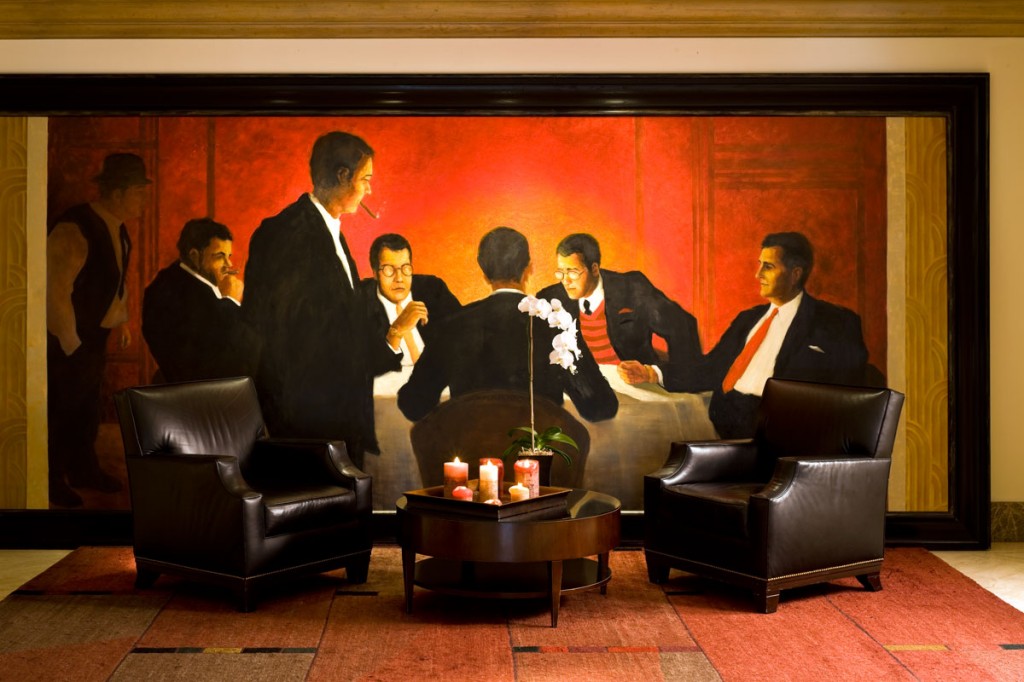 Guests of The St. Regis Houston are treated to not just one bar mural, but rather a series of abstract paintings by California artist Jon Prud’homme. The impressive collection ranges in size from the 4-by-4-foot “Isabella,” to the 8-by-16-foot “The Game,” which depicts backdoor card games that lead to big business deals. The consistent theme throughout the collection is the use of the color red, meant to complement the extensive use of cherry wood and the contemporary theme of The Remington Restaurant and Bar. Numerous luxury hotels, including the now-closed St. Regis Los Angeles, have commissioned artwork from Prud’homme.

The St. Regis San Francisco displays two large-scale paintings by Canadian artist Andrew Morrow on opposing walls in the Lobby Bar. Titled “Love” and “War,” the juxtaposition of the 8-by-16-foot murals highlights the contrasting themes of “Old World” and “New World,” and presents a compositional mirror image of one another. In “Love,” Morrow depicts the love and diversity of San Francisco as well as its Old World luxury, sophistication and status—also pillars of St. Regis. The mural “War” depicts the enduring strength and beauty of the world as it progresses in time from the past to the future. 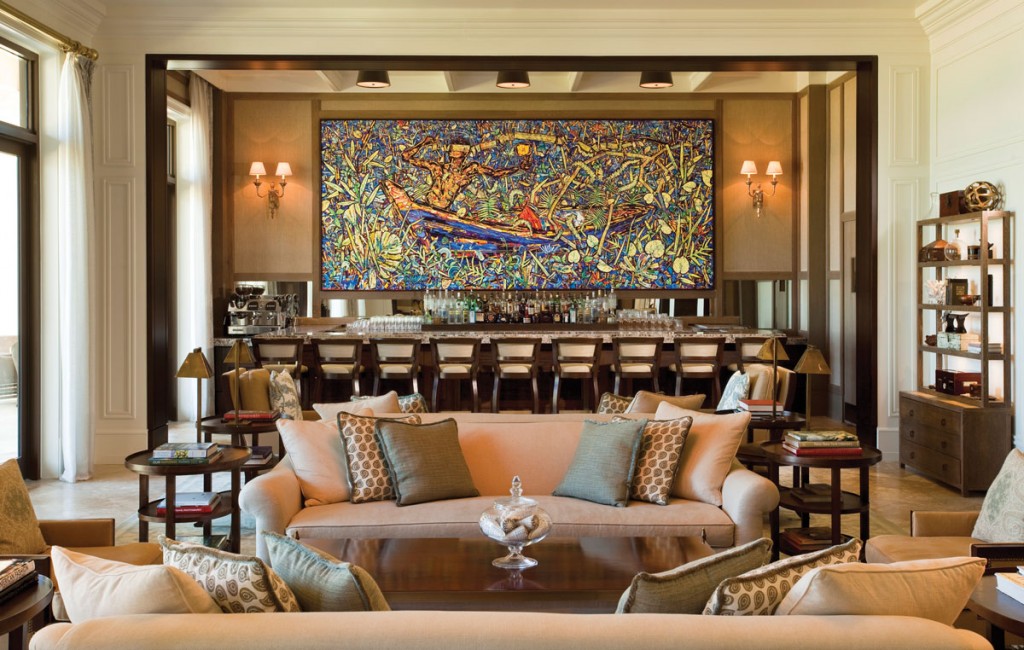 Puerto Rican-born artist Arnaldo Roche Rabell was invited to The St. Regis Bahia Beach Resort to draw inspiration from the resort’s lush scenery for the 7-by-16-foot bar mural, “The Long Awaited Voyage.” The principal character in the piece is blindfolded to understand the power of nature, and symbolizes an ambiguous journey inside and out. Roche Rabell, who also studied in Chicago, is internationally renowned for his contribution to the plastic arts, which involves manipulating a plastic medium to create three-dimensional art. Roche Rabell created his own unique stylistic vocabulary in this category, in which he applies layers of bright colors to canvas with models underneath (creating the bas-relief), covering the bright layers in black and then rubbing off the black with a palette to produce dramatic and revealing images. Usually large in format, exuberant in color and dramatic in content, his pictorial expressionism feeds from a variety of personal and historic matters. His work often involves layers of images—a symbolic nod to having multiple layers of identity as both a Puerto Rican and American.

The hand-painted mural at The St. Regis Princeville Resort pays homage to the Hawaiian culture by depicting the ancient Hawaiian ceremony of oahi, or fire throwing. The oahi was performed by Hawaiian kane (men) for the most esteemed celebrations and required months of preparation. On the day of the ceremony, skilled fire throwers climbed the steep cliffs of Mount Makana and hurled blazing 10- to 20-foot hollowed logs, called firebrands, out over the ocean. Updrafts created by the trade winds hitting the sheer cliff of Makana kept the feather-light firebrands aloft, creating the allusion of a sky ablaze with scores of shooting stars. On Friday evenings, The St. Regis Bar sunset ritual features a Hawaiian storyteller that shares this unique tradition with resort guests.