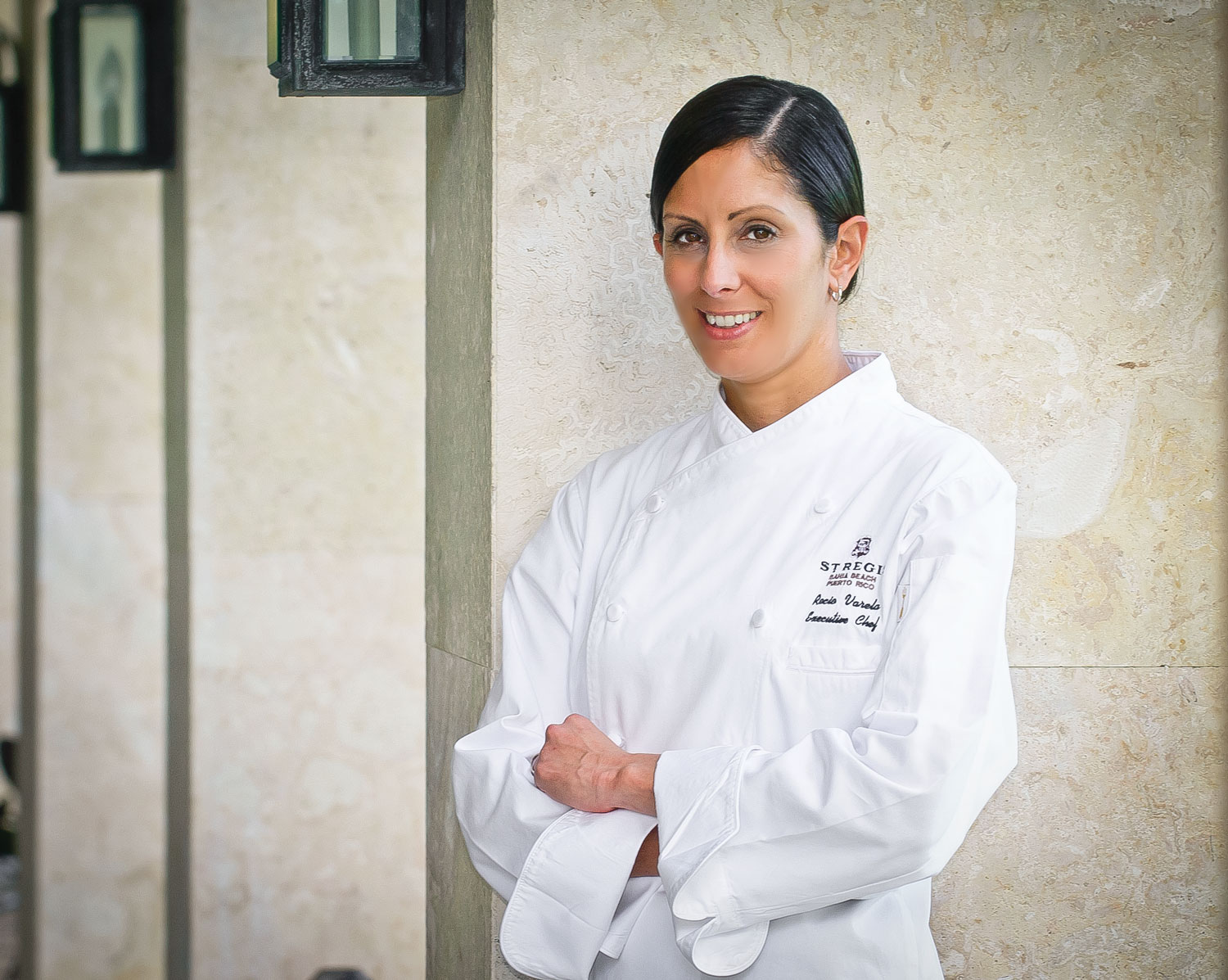 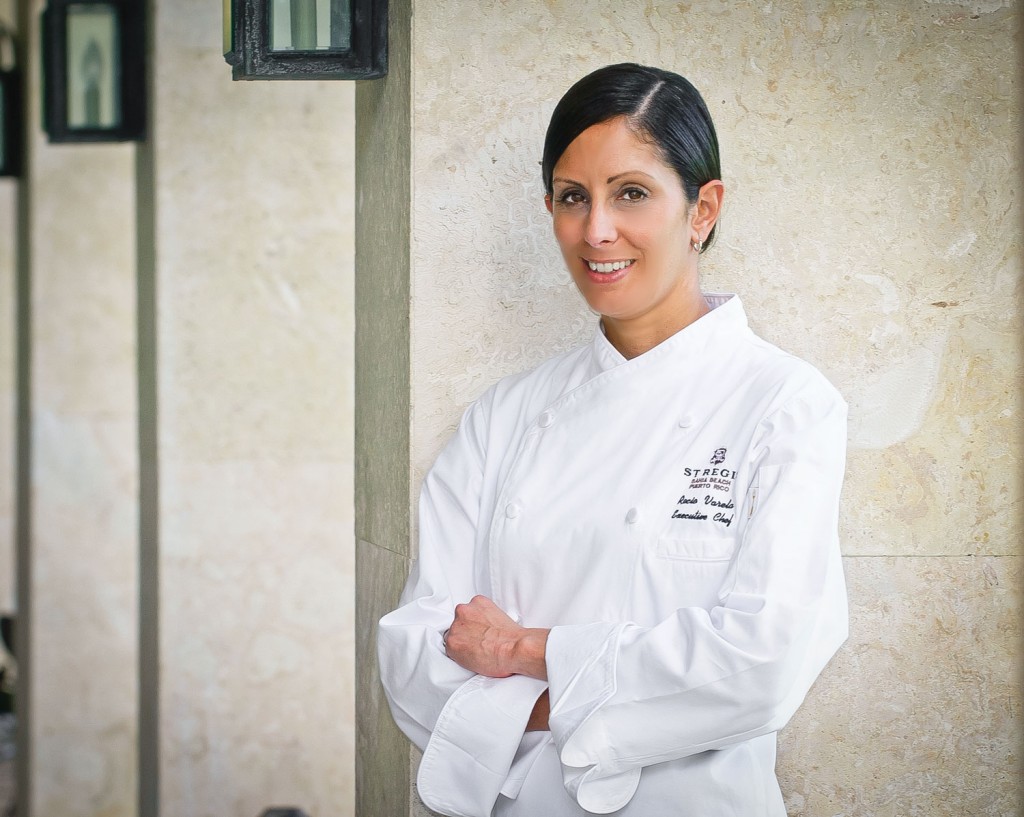 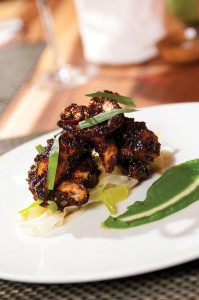 A chicken fricassee recipe, hastily scribbled down by an excited 12-year-old girl, was the topic of a conversation that would sculpt a soon-to-be chef’s passion. Hanging up the phone, Rocio Varela put on her mother’s cotton apron and got to work cooking her first meal of multitudes to come.

Now the executive chef at The St. Regis Bahia Beach Resort in Rio Grande, Puerto Rico, Varela runs the entire culinary program at the resort, ensuring quality and vision for the 24-hour room service menu, banquet hall and the four eateries. She has worked at some of the nation’s finest hotels, and she recently beat out 300 chefs to become the only female finalist in Starwood Hotel’s 2011 Hot Chef competition—all milestones along the path that the highly regarded chef set forth on more than 30 years ago in her parents’ kitchen.

Although she was the youngest of five siblings, making family dinners was left up to Varela after her mother began to work. “I remember the first dinner I served to my family like it was yesterday,” she says. “I wasn’t nervous because it tasted so good. When my mother took her first bite, her face lit up, and I knew I did something right.”  For the next few years, until she got a job at a gourmet kitchen supply store, Varela mastered her mother’s Puerto Rican and European recipes. No longer needing the daily telephone cooking lesson, she began experimenting with spices and adding her own twists. 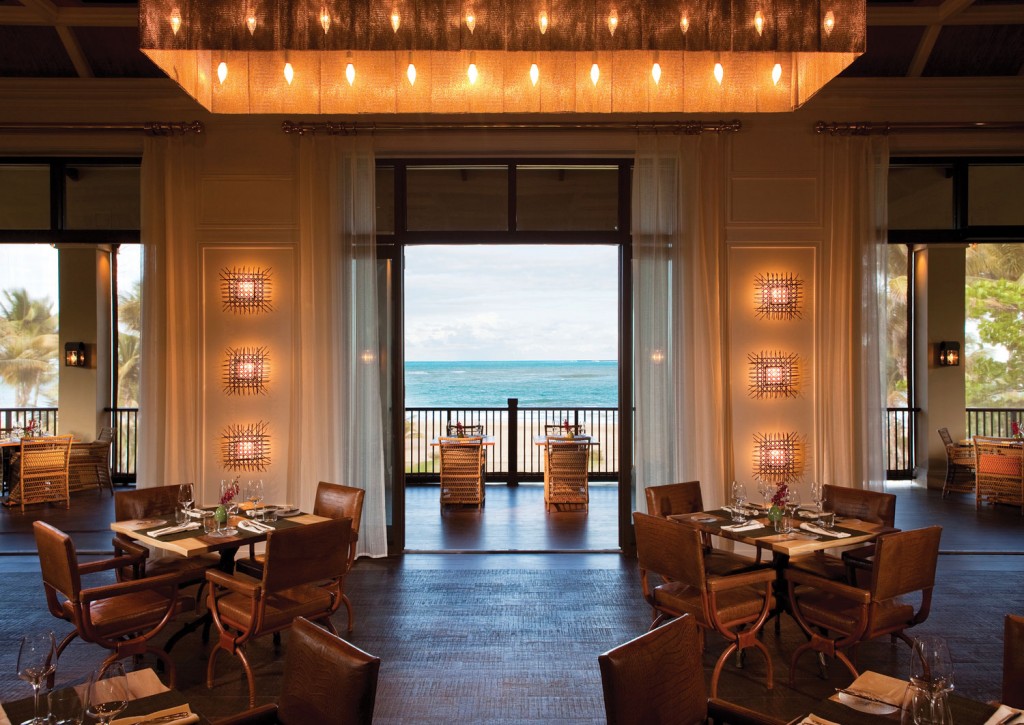 Surprised by how much pleasure she gained from seeing her family enjoy her dinners, often asking for seconds, Varela’s dream of becoming a chef began to take shape. This dream became a driving force, spurring her appetite to learn more. She stayed late and came early when she started her retail job at the kitchen store, doing anything from sweeping to organizing shelves, just to watch the guest chefs during the weekly cooking classes.

At age 14, her dream became a calling. At the insistence and letter of recommendation from Dolly Colon, her employer, she left her birthplace of San Juan, Puerto Rico, to enroll in Johnson and Wales University’s culinary arts program in Rhode Island. Speaking rudimentary English, 17-year-old Varela braved a new country with only her autodidactic cooking and an insatiable hunger for all things culinary.

While at Johnson and Wales, Varela had to continually demonstrate why she deserved to be at the school with her peers and teachers. “They had an attitude like, ‘What do you know? You’re just too young,’ and I knew I had to get tough, fast,” Varela says.  Establishing herself in the kitchen, while being emotionally strong in the midst of criticism and bias, was not an easy task. When she felt she was prepared to take on more challenging courses, the instructors would tell her she was too young and unprepared. Meanwhile, Varela observed less experienced, younger male students advance faster than she.  “Still to this day, I constantly have to prove myself as a woman in this industry,” says Varela.  But she prevailed, taking this as a challenge to work harder at refining her skills, and graduated with cum laude honors and an internship at Café Plaza in Boston. 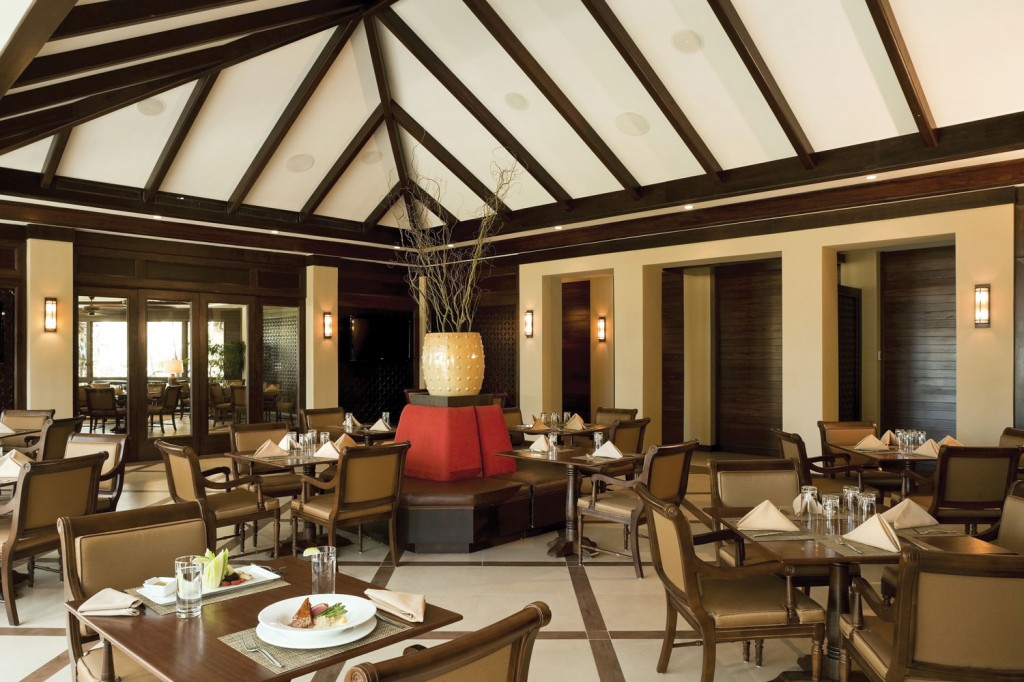 The flavors of Varela’s journey are apparent in her delicate, unfussy cooking that highlights the trials and triumphs of her life. “I like to cook simple dishes, but within its simplicity, I like to leave you wondering what’s in it by layering flavors, like confits, marinades or spice rubs, to create a surprise element,” she explains. Before coming to The St. Regis Bahia Beach Resort, Varela’s simple dishes graced the tables at exclusive hotels around the world. She served as executive chef at the Parker Meridien in Palm Springs, Sheraton Puerto Rico Hotel Casino in San Juan and the W Hotel San Diego.

Varela’s experience extends beyond the kitchen as well: Back in her native Puerto Rico, she returned to the classroom as a chef instructor at the International School of Tourism and Hotel Management at Universidad del Este. In 2002, she trained a team of 12 students to compete in the Future Chef Convention, where they won four silver and two bronze medals. The chef’s unique professional background continued as she took a position with the world’s largest casual dining company, Darden Restaurants, which owns Red Lobster, Olive Garden and Smokey Bones. Conducting research and development of new recipes as part of the opening team for Darden’s Bahama Breeze Restaurants Corporate Division, Varela created and implemented a management culinary training program and led the opening of four restaurants in Florida.

Varela continued as a consultant development chef for Darden, where she exercised her creativity to rework original recipes and developed new dishes for the Bahama Breeze restaurants before becoming a chef at the Miami location. During this time, she represented Bahama Breeze in the American Culinary Federation Culinary Competitions of 1997 and 1998, and won numerous corporate awards.

A Star at the St. Regis 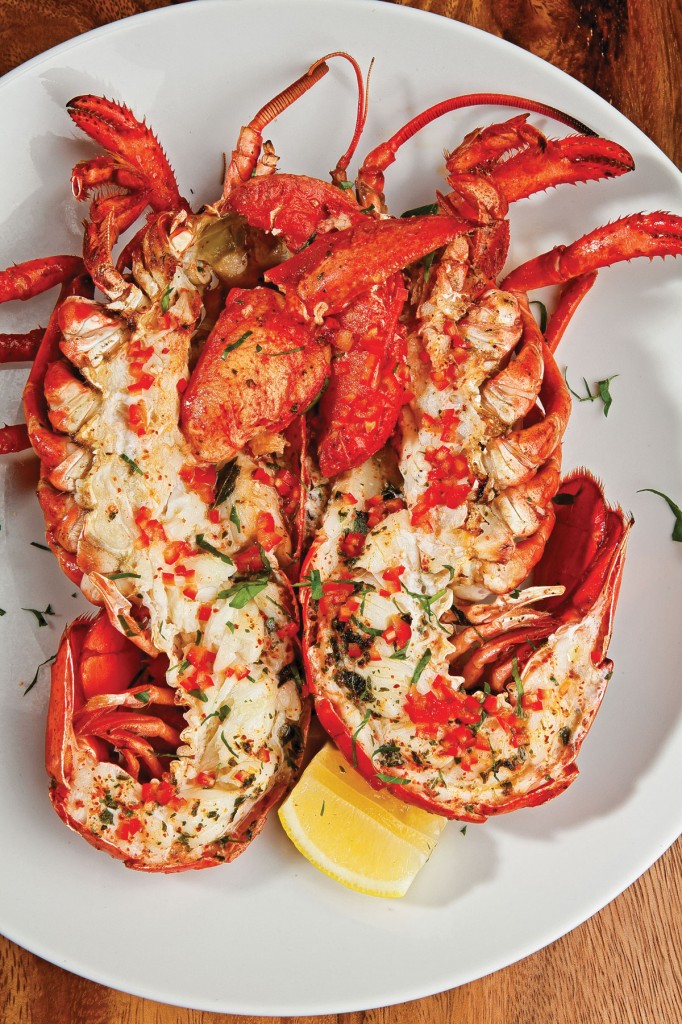 Joining The St. Regis Bahia Beach Resort as executive chef was a new challenge for Varela, but has proven to be one that offers new horizons and limitless opportunities.  “When I’m driving into work each day at the St. Regis amidst the El Yunque rainforest, I just feel so lucky to do what I do,” Varela says.  Varela heads up the resort’s culinary operations, overseing banquets, private dinners and all the restaurants on the property, including The St. Regis Bar, Molasses, Seagrapes and Fern. She even personally responds to guests’ dietary requests via email.  “Varela has a refined culinary concept using nature in her favor,” says Celine Vasse, outlets director at The St. Regis Bahia Beach Resort. “Since she loves the outdoors, we have created a garden for her secret ingredient touches.”

At Fern, chef Jean-Georges Vongerichten’s restaurant, the gourmet recipes are executed with a surgeon’s precision under 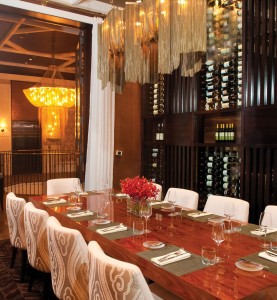 Varela’s watchful eye. Some of Fern’s signature entrees include the black pepper octopus with sweet onion and aji dulce, steamed shrimp salad with Champagne dressing and avocado pizza topped with jalapeno, cilantro and lime. While all The St. Regis Bahia Beach Resort restaurants have a Puerto Rican flair, for local specialties, a visit to Molasses is a must. Varela recommends the mofongo (mashed yucca), the grilled lobster and the whole red snapper.

On the room service menu, look for Varela’s crispy chicken confit. It is one of her signature dishes, marinated overnight in a Puerto Rican-style spice rub, then baked and served on a bed of greens, drizzled with pomegranate dressing.  Not only can Varela cook, but she uses her experience as a chef instructor to show guests how to do it. Varela offers private cooking classes for those staying at The St. Regis Bahia Beach Resort. A two- to three-hour session consists of learning a new dish from the executive chef and relishing in the labor of love with a sit-down meal, paired with wine.

Beyond the day-to-day duties at The St. Regis Bahia Beach Resort, Varela speaks of creating a family. Not her own per se, but a family among the kitchen staff, from the butler servers to the sous chefs.  Maybe it’s because she grew up with such a supportive family that inspires her to create loyalty and harmony in the work place—or maybe it’s just recognizing that the human spirit excels in such an environment. Whatever the reason, it is one of her primary goals to ensure the signature Starwood guest service at The St. Regis Bahia Beach Resort. “Being a chef has become so much more, so much better than just cooking behind the line,” Varela says. “It’s like combining many good deeds in one job. I really enjoy mentoring other  chefs and creating a team, like a family, in the kitchen.”

As she hurries out to examine the hydroponic lettuce growing in the resort’s greenhouse, one last question remains: What does it takes to succeed as a female chef?“Being cute doesn’t fit in the kitchen. If you try to act cute, you’re not going to be taken seriously,” Varela explains. “And most importantly, leave your personal life outside of the kitchen. Hard work, determination and tolerance are the keys to success.”

A Slice of life with Chef Rocio Varela

Favorite spice: “Besides salt and pepper, if I had only one spice to use for the rest of my life, it would have to be curry. Curry has dozens of spices in one and can be used so many different ways.”

Favorite place at The St. Regis Bahia Beach Resort: “The Astor Terrace is my favorite place on the resort; it’s just so peaceful and beautiful there.”

Favorite meal to cook IN YOUR OWN KITCHEN: “Even though chicken fricassee is most requested by my family, my leg of lamb recipe is my favorite to cook. I marinate it overnight in sherry or wine, thyme, bay leaf, garlic, tarragon, rosemary and—I shouldn’t be telling you this— but my secret ingredient is cinnamon. I sear the lamb first, then roast it in the oven until medium rare for an hour and a half, and serve it with tossed arugula and roasted potatoes.”

Biggest Kitchen Pet Peeve: “When a chef is messy, I get crazy! I can’t stand a dirty station. I use humor to get my point across, but everyone knows when I’m around to clean up.”