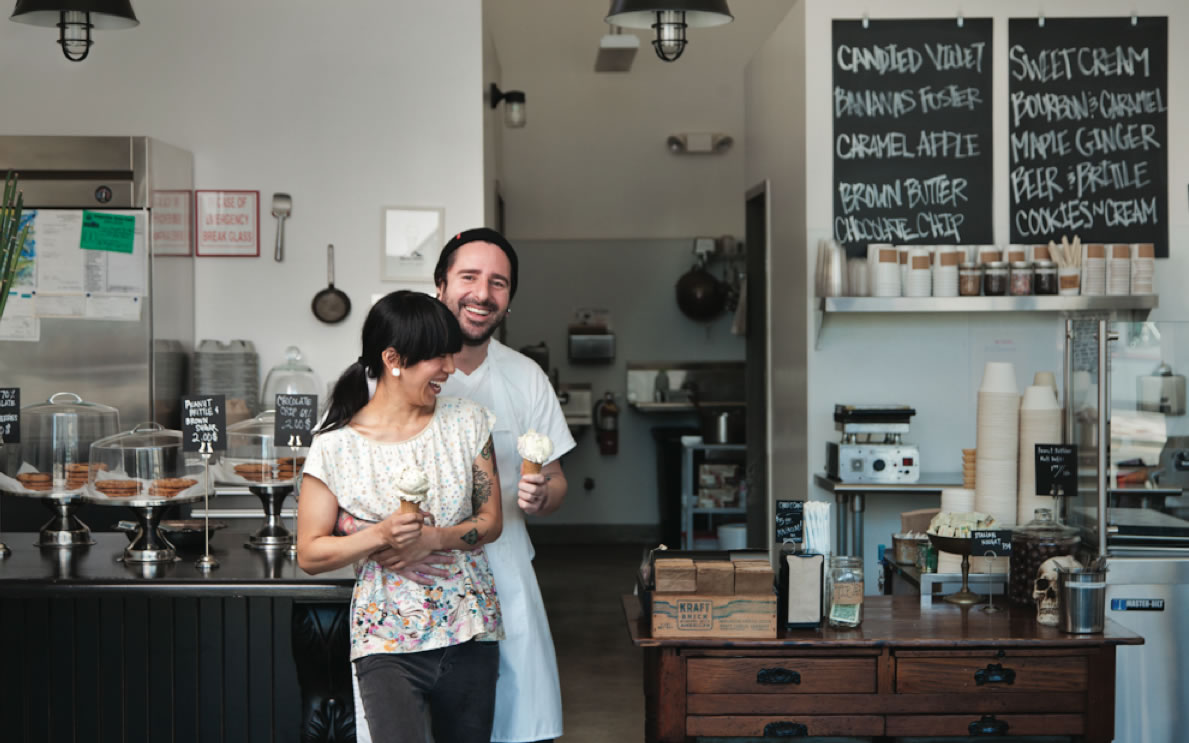 San Francisco’s scorching hot ice cream scene is the coolest in the country.

San Francisco in summertime is known as being “cool” compared to many other major U.S. cities. On average, temperatures exceed 75 degrees Fahrenheit only 28 days a year. So while a summery scorcher is rare, the city’s consistent weather means frosty treats, like ice cream, are a year-round indulgence.

And thank goodness for that. In the last couple of years, a handful of innovative chefs have lit up the scene with delicious flavors no one had even imagined possible. San Franciscans have always had a sweet spot for ice cream, but up until now, never a cult following. While vanilla, chocolate and strawberry are often in each of these shop’s rotations, what is making these spots famous are the irreverent and tasty flavor combinations. 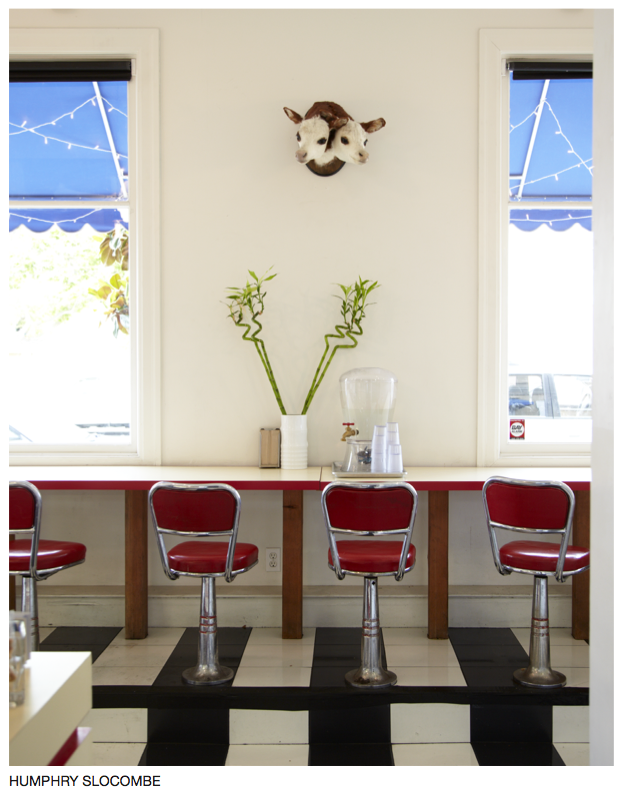 With flavors such as Boccalone Prosciutto, Foie Gras and Government Cheese, Humphry Slocombe has quickly earned a reputation as one of the more avant-garde ice cream shops in town. And even if the concept can at first seem a little highbrow, if not downright daunting, the crowds the shop draws is amazingly diverse. It’s not surprising to find soccer moms, grandmas and hipsters all in the same, winding line.

Owner Jake Godby, whose professional resume includes stints at some of the city’s most elite restaurants (Zuni, Boulevard and Coi among them), opened his speck of a shop in 2008. His list of flavors has since climbed into the hundreds, but only a fraction of those are available on any given day. It gives patrons the opportunity to taste new and exciting flavors on every visit, and it gives Godby a chance to keep creating without any kind of boundaries.

The shop’s Secret Breakfast is by far its most famous flavor: ice cream infused with Jim Beam bourbon and toasted cornflakes. One taste and it’s easy to see why. The heat of the bourbon, creaminess of the ice cream and the homey presence of cornflakes is an almost surreal experience. Godby recently published a book, “Humphry Slocombe Ice Cream Book,” where he actually reveals the secret to Secret Breakfast’s addiction-inducing characteristics, along with 40 other of its secret recipes.

Perhaps surprisingly enough, it is not Humphry Slocombe’s roster of eyebrow-raising flavors that has cultivated the ice cream shop’s devoted following, it’s their delicious taste. In fact, one would be hard- pressed to find a shop that can offer such a realistic representation of the ingredients the flavors tout. The Thai Chili Lime is an amazing marriage of fiery Thai chilies and soothing, tart lime. There’s no suggestion of these two ingredients in the mix— their presence is absolute.

So if you are going to try one of the more irreverent flavors, such as Fume, expect a frozen treat that is unabashedly smoky—think campfire smoky. But don’t worry, the staff is always ready with an army of spoons so that patrons can taste before they buy. If the Butter Beer is too weird, you can always opt for the much safer Mint Chip. That being said, if there ever was a time to take your mind and palate on a whirlwind adventure, this is the place. (2790 Harrison St.; 415-550- 6971; humphryslocombe.com)

More than just a way to end dinner, ice cream in San Francisco is a new source of innovation for chefs to create flavors that stretch the imagination. It’s become something that can be the main event rather than a sweet afterthought. And with more ice cream chefs hocking their wares at San Francisco’s most prestigious restaurants, it’s only a matter of time before what’s now seen as edgy could become be mainstream. Foie gras hot fudge sundae anyone? 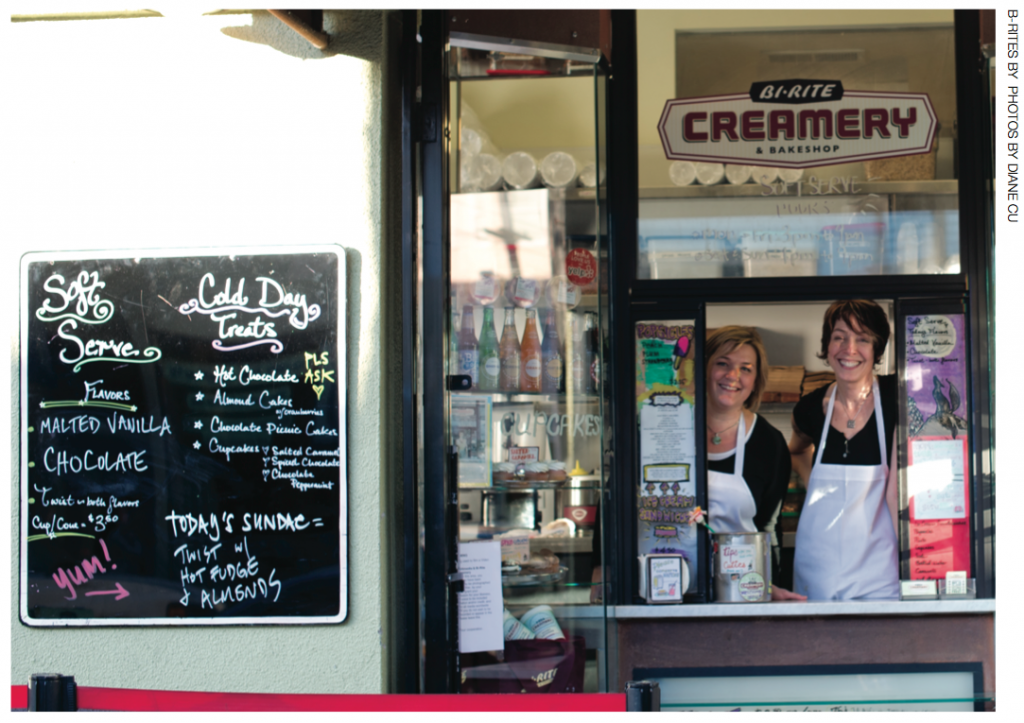 Even on the city’s more blustery days, the line of people waiting to indulge in one of the Bi-Rite Creamery’s gourmet scoops wraps around the block. It’s not unheard of to wait 45 minutes for a single scoop. Velvet ropes are even employed to keep the lines tamed and the sidewalk free. But unforgettable flavors such as luscious roasted banana, toasted coconut and a mind-blowing strawberry balsamic manage to make the waiting game worth it.

Pastry chefs Anne Walker and Kris Hoogerhyde opened Bi-Rite Creamery in 2006.The duo started baking together out of a rented kitchen, four years prior, for the shop’s parent store, the wildly popular Bi-Rite Market grocery store, located just a few steps away. It was the first ice cream shop in San Francisco to use organic dairy products, sourced from the famous Straus dairy farm located only 45 miles away in Petaluma. And with that, a frosty revolution was under way.

Although the flavors are innovative (Earl Grey, orange cardamom and chai-spiced milk chocolate, to name a few), the secret to Bi-Rite Creamery’s astounding success is most definitely due to how the ice creams actually taste like the flavors in the name. This is because Walker and Hoogerhyde don’t compromise on ingredients.

Ritual Coffee, a local purveyor located in the same neighborhood and known for its extra strong roasts, gives the creamery’s Coffee Toffee its caffeinated overtones. The lavender for Bi-Rite’s ethereal honey lavender ice cream is harvested in Sonoma, as is the honey (though sometimes it comes from rooftop beehives.) The juiciness found in the orange cardamom comes from the locally sourced oranges, juiced on site.

If there was a showstopper, however, it would have to be the sea salt caramel, a rich, deceptively simple concoction made only of sugar, cream, salt, milk and eggs, with surprisingly savory leanings. Another crowd favorite is Sam’s Sundae (affectionately named for Bi-Rite Market owner Sam Mogannam), which features scoops of deeply decadent chocolate ice cream topped with bergamot olive oil and Maldon sea salt.

Given the fact the owners are pastry chefs, skip the cone or cup and go for a scoop of vanilla sandwiched between scratch-baked chocolate chip cookies. There’s also roasted banana between lemon gingersnaps and toasted coconut between moist oatmeal raisin cookies. 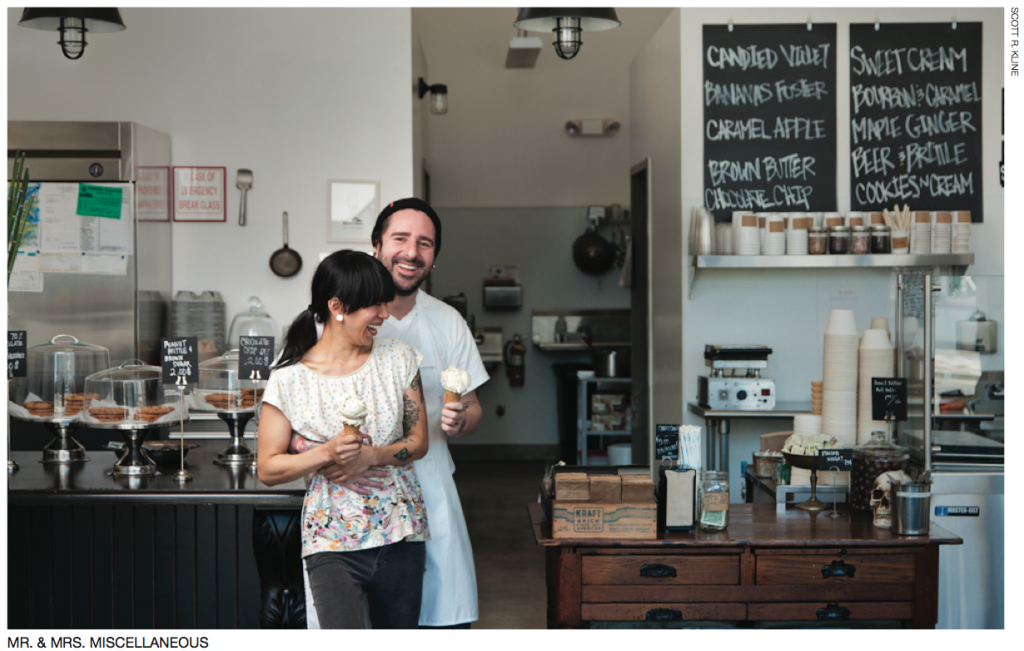 The menu for this charming shop, located in San Francisco’s newly christened hipster Dogpatch neighborhood, reads more like that of a cocktail lounge than an ice cream parlor—and that’s on purpose. Owners Annabelle Topacio and Ian Flores take their inspiration from cocktails more than anything else when making their outstanding assortment of ice creams and baked goods.

For instance, the deliciously boozy Old- Fashioned is a cream-based ice cream studded with cherries that have been soaked in Maker’s Mark bourbon for a month. The Pink Squirrel combines crème de cacao and crème de noyaux (an almond flavored liqueur made from apricot kernels), almost exactly mirroring the actual drink recipe. It’s a hit among the older bartenders who visit the shop, according to Topacio. One of the shop’s bestsellers is the Ballpark, a highly addictive ice cream infused with Anchor Porter beer, peanuts and chunks of chocolate-covered pretzels. Meanwhile, the shop also sells homemade almond brittle infused with Rasputin, a gnarly beer made by North Coast.

Mr. & Mrs. Miscellaneous also has an extensive non-alcoholic menu as well. Tea-infused ice creams, such as jasmine and green tea, are regularly featured on the menu. And old standards such as vanilla and chocolate chip are also for sale. As much as possible, all toppings and ingredients are made in-house. For instance, tres leches ice cream includes sweet milk and cake baked at the shop, and the decadent Black Forest features hunks of chocolate cake loaded with Kir-soaked cherries. For Easter, the couple created a carrot cake flavor, which was a popular request.

Flores is responsible for introducing the more experimental flavors to the shop, such as a bold orange-chipotle ice cream. One of Flores’ favorites is a corn and caramel flavor, the base of which is white or yellow corn that is then infused with bits of caramelized kernels. The effect is caramel corn. Possibly the most outrageous combination has included coconut milk, basil and a mix of other flavors that resulted in an ice cream not unlike tom kha gai, a popular Thai soup. (699 22nd St.; 415-970-0750)

When owner Juliet Pries opened her vintage soda fountain in Cole Valley, the goal was to create a truly authentic parlor—the kind that used to have more pharmaceutical qualities than anything else. The menu is actually culled from the popular favorites that dominated the menus of soda fountains of the 1920s and 1930s. That means lots of tinctures, phosphates, lactarts and egg creams—which are completely foreign to most visitors. Milkshakes are concocted the old- fashioned way: milk, creams, egg and flavorings, such as rye-based butterscotch syrup and blackstrap molasses. There are even panaceas: “sodas made with ‘healing’ or medicinal properties,” according to the menu.

Crushes, which are fresh fruit-based sodas, include a raspberry chocolate crush made with muddled raspberries and homemade chocolate syrup. A popular favorite is the Peche No. 3, a cherry and anise frappe made from pulverized ice, cherry syrup, anise tincture, spearmint and soda. One more way to enjoy summer in the city! (815 Cole St.; 415-742-4932; theicecreambarsf.com)