An elevated art form in the culinary world, sushi involves an incredible amount of skill and precision. The delicate dish of vinegar rice paired with seafood and vegetables—a staple in Japan—has made its way onto the tables of restaurants across the United States. Authentic sushi is simple, with just one or two ingredients that allow the flavors of the ocean to shine, but the American incarnation boasts specialty sauces and complex combinations. Although it strays from its traditional roots, the resulting Western interpretation is both approachable and creative.

Japanese seafood—including sushi as well as sashimi and hot plates—is in high demand in the coastal city of Miami. The city’s close proximity to the ocean invites travelers to tempt their palates at eateries promising fresh fish, both cooked and raw. Asian cuisine is being redefined here, with a number of imaginative chefs marrying tradition with Miami style. Sushi purists and adventurous epicureans alike will be pleased with the Japanese offerings at these six restaurants, which offer myriad tastes ranging from conventional to Latin fusion.

Chef-owner Kevin Cory says Naoe, which relocated to Courvoisier Centre in Brickell Key in 2012, concentrates on customization. A new menu is created each day, with the only consistent factor being the high-quality ingredients used in each dish.

“The menu changes as seasonal products change,” Cory says. “We also keep record of our guests’ menus to make changes and keep it familiar at the same time.”

The omakase experience puts dining decisions in the hands of the skilled chef. Just 16 people are served each night—two seatings of eight people at 6 and 9:30 p.m.—and reservations are required. Special requests are considered with submission several days in advance, and allergies to staple ingredients like eggs, shellfish, rice and gluten can’t be accommodated. But the policies, while strict, are put in place to ensure the gastronomic adventure is genuine and unencumbered. It allows the 41-year-old chef the freedom to create a bento box of raw and cooked dishes—past offerings have included items like miso soup and poached octopus heads—followed by several pieces of nigiri sushi that come together to create an unforgettable meal.

“Naoe is one of only two Japanese restaurants outside of Japan to achieve the Forbes Travel Guide Five-Star rating,” Cory explains. “[It’s] the highest honor in the hospitality industry, only achieved by consistently providing a truly unique and distinctive dining experience with superlative service and elegant decor. … Our style at Naoe is simple and from the heart.” (naoemiami.com) 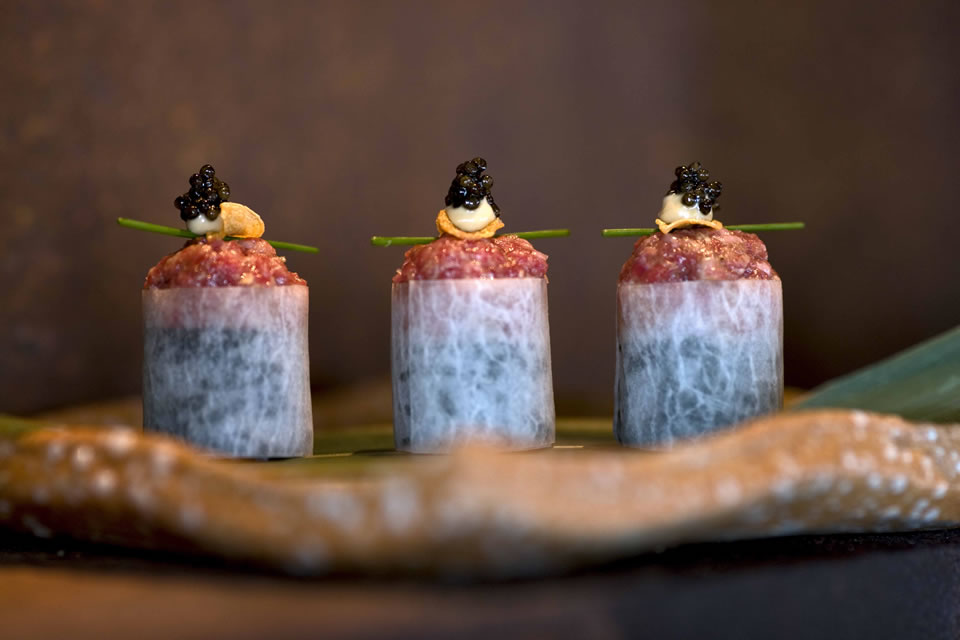 Located on the ground floor of Kimpton’s Epic Hotel is Zuma, a contemporary restaurant inspired by Japanese izakayas. Comparable in style to Spanish tapas, dishes are sharable bites to be enjoyed with a round of drinks and good conversation with dining companions. At Zuma, the plates are served continuously throughout each group’s visit rather than all at once to encourage communal sampling.

A signature hot dish makes seafood its star: the lobster no oven yaki is a succulent roasted lobster prepared with shizo-ponzu butter. Maki rolls—ideal for sharing—are customary at Zuma, with options that range from a California roll with Alaskan king crab, avocado and tobiko (flying fish roe) to pirikara maguro maki (a spicy tuna roll with green chili sauce and tobiko) and caterpillar maki (prawn tempura with freshwater eel and avocado). Those who like the heat might enjoy rolls like the pirikara hamachi, with spicy yellowtail, serrano pepper and wasabi mayonnaise.

During the lunchtime rush, Zuma offers a prix-fixe menu served in less than an hour, in addition to the full a la carte menu. The set lunches often include a choice of classic dishes such as the black cod marinated in saikyo miso or the chirashi don, which is sashimi prepared with avocado, cucumber, asparagus and salmon. (zumarestaurant.com)

At SushiSamba, a Sushi & Sake 101 class teaches diners to recreate the restaurant’s most enticing dishes at home. The two-hour demonstrations begin with a history lesson from a sake sommelier and end with students making and enjoying sushi rolls of their choice.

The classes are just one way SushiSamba distinguishes itself from other culinary establishments in Miami. David Sears, executive chef at the Coral Gables location, says it’s also the bright and artistic aesthetic that makes for a unique dining experience.

“The design of the restaurant is characteristic of the SushiSamba experience,” Sears says of the red and green earth-toned tables and chairs that enhance the eatery’s art gallery-style ambience.

Chef-owner Mario Cicilia of Sake Room combines traditional Japanese cuisine with bold Caribbean flavors, introducing a piquant approach to sushi. A popular item is the spicy crab roll, which provides a kick thanks to the radish sprouts and chili mayonnaise that accompany the chopped imitation crab—and it’s all punctuated by a dash of Sriracha sauce.

Modern seafood sensibilities are appeased with sushi selections like the bagel roll, which features salmon, scallions and cream cheese, and the Dr. Phillips roll, a mixture of crab, avocado and cream cheese with kanikama tempura. Both are a far departure from traditional sushi, but offer imaginative combinations reflective of the chef’s background. To eat like a local, however, try the Miami roll, which includes fried salmon and caviar with dabs of avocado and chili mayonnaise.

While filling up on these many innovative rolls is a surefire way to experience Sake Room, guests shouldn’t leave without trying the dessert. Creativity translates to sweet and savory options such as banana or apple tempura served with ice cream, as well as the fruit fondue, which comes with white chocolate and strawberry sauce. (sakeroom.com)

Nobu is part of a growing empire of Japanese restaurants owned by celebrity chef Nobu Matsuhisa. With a dozen eateries to-date in the U.S. as well as nearly 20 more locations spread across the world, the restaurants appeal to a wide palate. At Nobu Miami Beach, Oscar Noborikawa, executive sushi chef, enhances the global element by incorporating a Peruvian flair into Japanese seafood. This blending of two cultures, he says, stems from his own upbringing.

“I have a Japanese background, [and I was] born in Peru,” Noborikawa explains. “I can offer the best of both worlds. … Our fusion of Japanese cuisine with Peruvian influences allows us to differentiate ourselves as a breaking force in the industry.”

Beyond staples like the yellowtail sashimi with jalapeno, many guests enjoy premium sushi options like the sawara (Spanish mackerel) and the tuna and asparagus roll. A weekly chef’s menu also allows diners to sample a variety of rotating dishes. Noborikawa encourages customers to open their minds to new items; when necessary, however, alternative ingredients are available for substitution.

The wide variety at Nobu is enough to draw crowds to the eatery daily, but Noborikawa also credits the restaurant’s success to the company’s corporate chef. “Having chef Thomas Buckley … here in our location is a great asset,” Noborikawa says. “We are able to be more gastronomically driven and [are] allowed more room for creativity.” (noburestaurants.com) 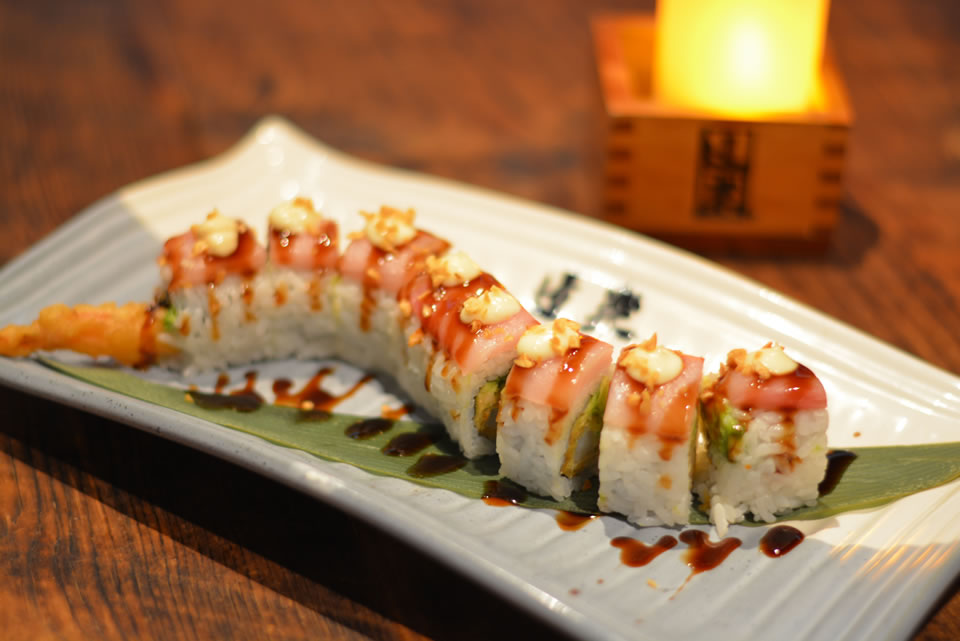 Kevin Aoki, Doraku’s founder and CEO, is the ideal person to run a Japanese restaurant in Miami. The son of Benihana founder Rocky Aoki has more than 20 years of experience in the restaurant industry; however, those looking for a Benihana clone will be surprised to discover a menu at Doraku that embraces a Latin influence mixed with pan-Asian flavors. This inspiration can be found in dishes such as Peruvian seafood ceviche (Hawaiian swordfish, crab, shrimp, octopus and ika (squid) with Japanese cucumbers, sweet onions and cilantro marinated in a spicy lemon yuzu sauce).

Doraku offers izakya dining, which means plates are brought to the tables at a steady pace to create a convivial ambience. To add to this aesthetic, Doraku has a variety of seating arrangements with space for parties of all sizes. For instance, the private Red Lantern Room seats 16 and is decorated with 25 lanterns, while a communal Happiness Table allows up to 14 guests. Smaller groups are also accommodated, particularly at the sushi bar, where diners enjoy views of antique masks from Japan and other parts of Asia. (dorakusushi.com)