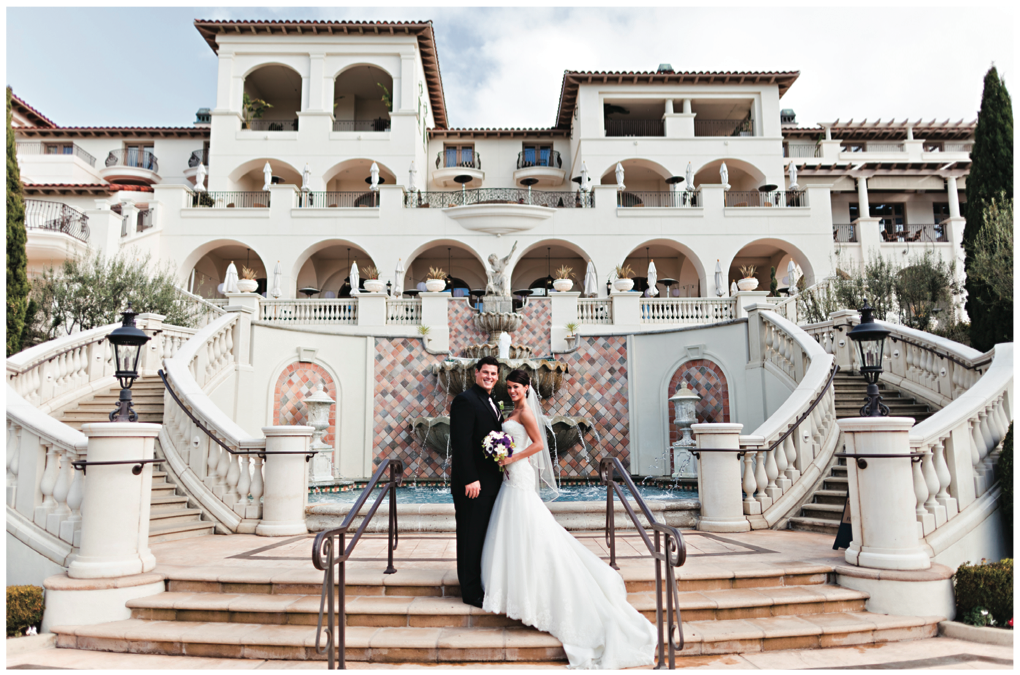 Meghan Paxton sits in the Castle Rock, Colo., home she shares with husband and three-time Super Bowl champion Lonie Paxton, preparing for the arrival of twins. One spectacular wall is filled with photos from the couple’s Feb. 26, 2011 wedding at The St. Regis Monarch Beach.

“People keep telling me that the wedding photos will soon be replaced with pictures of the babies,” Meghan says, formerly Meghan Vasconcellos, who met her husband when she was a line captain for the New England Patriots cheerleaders and he was a long snapper for the team. “Our wedding was such a perfect day; those pictures are never coming down!” 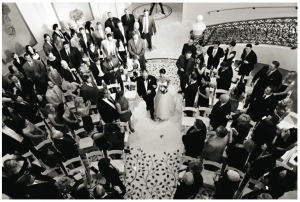 The day didn’t start off so perfectly. In fact, throughout the previous week, the couple nervously checked in with St. Regis catering sales manager Kelly Odell about options for bringing their nuptials inside should the weather dictate. Forecasters were predicting rain and temperatures in the low 50s for the Saturday wedding, which was meant to take place in the resort’s botanical garden, with the reception to follow in the open-air Club 19 restaurant and banquet hall.

“February is our riskiest month, weather-wise,” Odell says. “Meghan and Lonie lived out of state, but they were watching the weather reports closely.”

Still, everybody held out hope until the morning of the wedding that the sun would shine brightly on the Paxton-Vasconcellos ceremony, says the couple’s personal wedding planner, Paula Laskelle, owner of Champagne Taste Wedding Designer in Orange County. 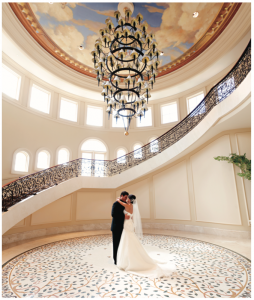 When Feb. 26 dawned overcast and chilly, Odell and Laskelle sprang into action to bring the outdoor ceremony in. Meghan did not want a ballroom wedding, and she did not get one. Because the resort was relatively quiet that winter day, Odell was able to secure the rotunda, with its spiraling, wrought iron-lined, white stone staircase and rose mural floor for the ceremony. She worked with the resort’s food and beverage administrator to shut down the Motif restaurant, which boasts similar ocean views as Club 19, but is completely indoors, for the reception.

“They ended up using two locations that we rarely get to use,” Odell says. “We never allow ceremonies there, but we were not busy that day, and there was nothing in the banquet room near the rotunda. They got to have this really unique wedding. Meghan got to come down that amazing stairwell. Everything would have to align again for someone to get this opportunity.”

St. Regis staff members’ efforts paid off: Other than needing to redirect some guests, nothing indicated the wedding hadn’t been planned just as it unfolded.

“We turned on a dime,” Laskelle says. “It was just so smooth. The hotel staff was on top of everything.” The simple décor planned for the gardens transferred seamlessly inside.

“The resort is so beautiful, I didn’t want to mess with it,” Meghan says. “I felt like I didn’t have to do much to the St. Regis.” 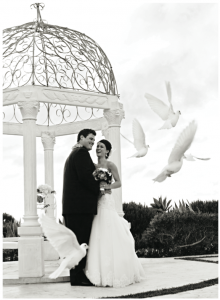 Guests caught their breath as the stunning bride, a former Sports Illustrated swimsuit model, descended the spiraling staircase of the rotunda in a traditional sleeveless white gown. Her five attendants preceded her down the stairs, embodying the simple elegance she was hoping for in eggplant-colored gowns with white and silver accessories.

“The rotunda was so personal,” Meghan says. “Everybody was really included. A friend said the ceremony was like one big group hug.”

After the ceremony, guests including Gisele Bundchen, Tom Brady and a top roster of NFL players, headed to Motif.

The reception raised the bar for such gatherings. Guests ate heartily at the Crystal Cove Buffet, an elaborate offering that included a seafood display of oysters, shrimp and crab claws on ice; six salads from simple Caesar to a rice noodle salad with spicy beef; a carving of roast prime rib; baked salmon on saffron risotto; grilled chicken breast in mushroom cream; and veal scaloppini.

“There were a lot of fully loaded plates, as I recall,” Odell comments.

The four-tier cream-colored wedding cake made by the hotel bakery was decorated with eggplant- hued ribbon and flowers. Guests could choose from vanilla with white chocolate mousse and fresh strawberries, and chocolate with whipped cream and assorted berries. Dessert options didn’t end there.

With every detail covered, Meghan was the rare bride who truly enjoyed her special day. “I actually got to eat, and the food was fabulous!” she says. 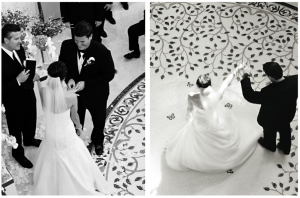 Another personal touch was a special offering at the bar: Meghan’s favorite mix of grape vodka, triple sec and Jaegermeister.

“It was a fun crowd with lots of dancing,” Odell says. “People looked like they were having a great time.”

The St. Regis Monarch Beach was a natural choice for the couple’s wedding. Lonie grew up in nearby Orange, Calif., and the two spend a good deal of time in Orange County. Meghan brought Lonie to the St. Regis for a few days to celebrate his 30th birthday and they enjoyed the experience so much they returned for his next two birthdays.

“It’s like our little private getaway,” Meghan explains. “It felt like the perfect place to have our wedding.” 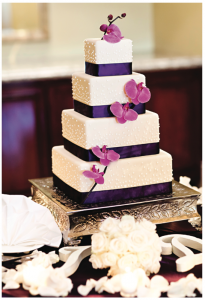 Already familiar with the resort and surrounding area, Lonie and Meghan invited wedding guests to arrive the Wednesday before the ceremony to enjoy time together. The groomsmen and friends spent a day golfing at the St. Regis while the girls went shopping in downtown Laguna Beach. They spent an afternoon barhopping on beach cruisers in Newport Beach, “mixing, mingling and having fun,” Meghan recalls.

“By Saturday, everyone was best friends,” she says.

The morning of the wedding, Meghan, her five attendants, close friends and family members basked in the luxuries and ocean views of the 1,800-square-foot Monarch Suite as they prepared for the ceremony.

“The suite was amazing!” Meghan says.

Months after the glow of the wedding was replaced with a glow of a different kind, Meghan’s voice still bubbles with joy as she talks about her wedding day.

“It truly was a fairytale,” she says. “I could not have had a better wedding. I wish I could do it all over again.” 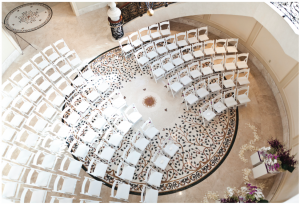 Some guests apparently wish for the same. Meghan recently received a note from a friend who requested that they have an anniversary party at the St. Regis each year.

While the resort provided the perfect gorgeous backdrop, the stars of the show were the bride and groom themselves. Their smiles were infectious, from the look of pure satisfaction on Lonie’s face as Meghan came down the rotunda stairwell toward him to the beam on Meghan’s face while declaring her vows to her soon-to-be husband.

Odell was thrilled to pull off a coup of sorts by getting the wedding into the rotunda, in no small part because of how sweet and easy to work with Lonie and Meghan were.

“They were just so in love,” she says.

Laskelle agrees: “I’ve been a wedding planner for 16 years. These are two very down-to-earth people, in spite of all the fame. Lonie was genuinely interested in the wedding planning and so obviously in love.”

Their love leaves an impression. Six months after the wedding, Lonie and Meghan returned to the St. Regis Monarch Beach for a getaway.

They were greeted at the door by a familiar face and an enthusiastic, “Hello, Mr. and Mrs. Paxton,” Meghan says. “I’ve stayed at many other resorts, and you just don’t get that St. Regis experience.” 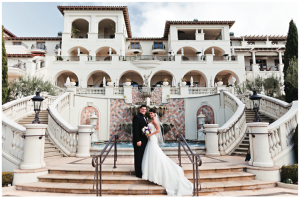