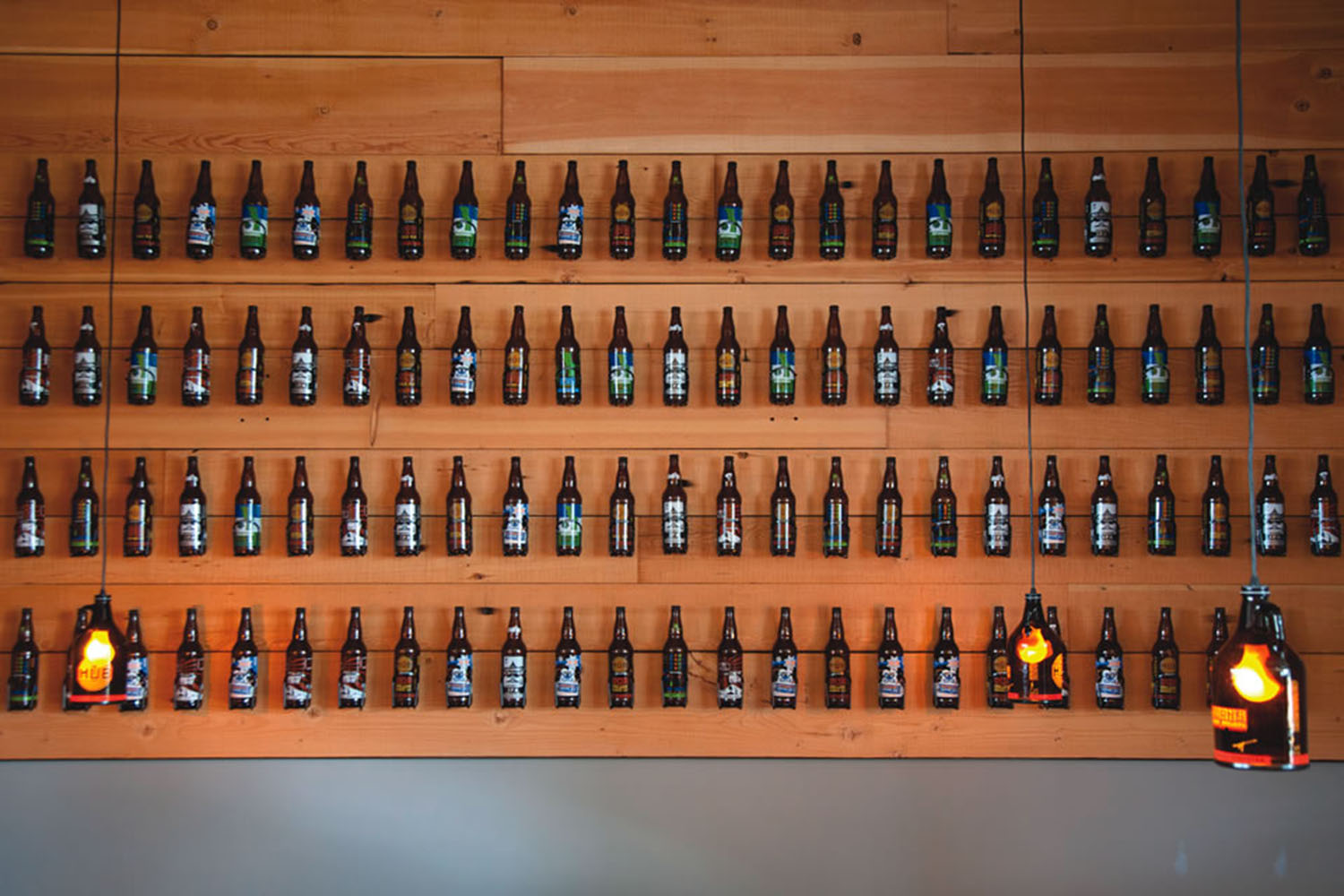 Four strangers at an Irish pub in Chicago’s Lincoln Park neighborhood have little in common. But, as a server arrives with a tray of 4-ounce tasting glasses brimming with a rich amber brew, beer becomes a shared interest that gets everyone talking. Recommendations are tossed back and forth—a local Chicagoan has heard of a small brewery in Southern California, and vice versa.

Beer has become a universal language, one spoken by academic 20-somethings from San Diego just as fluently as middle-aged, tattooed bikers from Indiana. A steadily growing consumer interest and new breweries opening with the blink of an eye prove that craft beer is here for the long haul. So, as mainstays perfect favorite recipes and neophytes get experimental, pack your bags for a hop-fueled road trip to discover some of the top microbrews and taprooms from East Coast to West.

ON THE WESTERN FRONT

Journey up the California coast—starting with San Diego County, the state’s mecca for microbrews—and end in the Pacific Northwest, where Portland, Ore., reigns as America’s largest craft market. The only problem you’ll encounter here is that there are too many breweries, and too little time. For those looking for just the quick hits, these four favorites provide great tastes along with behind-the-scenes tours.

West Coast natives may take this craft titan for granted, but its ingenuity and “big character” beers are not to be overlooked. Make an advance reservation for a 45-minute guided tour to touch and smell malted barley and hops, then peek at the 30-foot-tall fermenter tanks in the brew house. The celebration of craft beer continues with four 4-ounce tastings (included in the modest $3 fee, which also provides a take-home souvenir glass), and an opportunity to sample drafts like the always-popular Stone IPA (India pale ale) or a limited edition Enjoy By release. The adjacent Stone Brewing World Bistro & Gardens in Escondido provides an idyllic setting to end the day—enjoy farm-fresh comfort food inside before savoring a pint in the 1-acre beer garden. 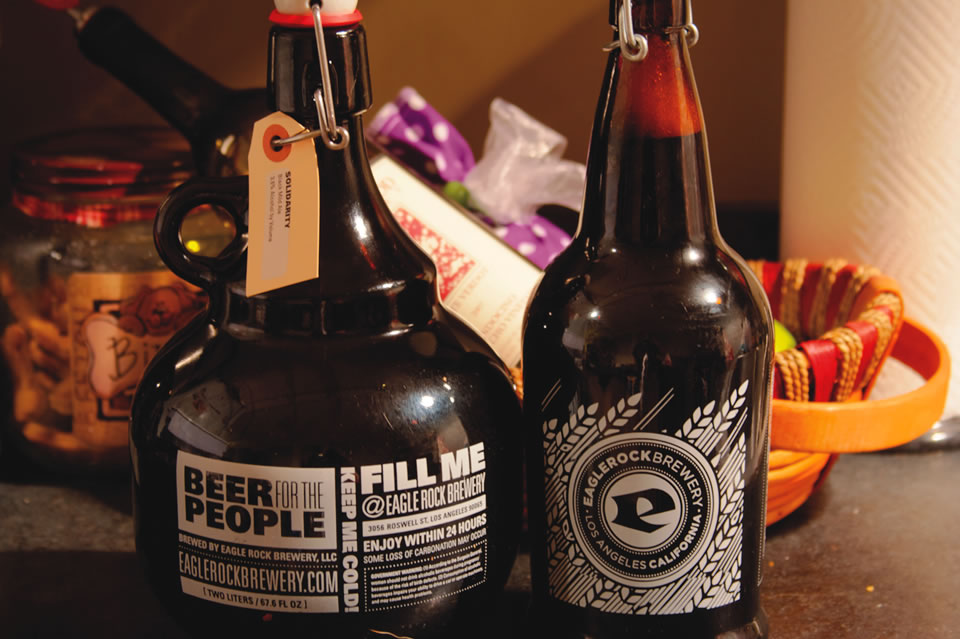 Meander your way up the coastline—possibly hitting Orange County hot spots like The Bruery in Placentia along the way—before arriving at Eagle Rock in northeast LA. The first to make a home in the city in decades, Eagle Rock offers free brew house tours on weekends as well as taproom tours Wednesday through Sunday; it also operates a pub around 10 minutes away that opened in late 2014. Try a small handful of year-round beers, including the Solidarity black mild ale with notes of coffee and smoke, plus award-winning seasonal selections. 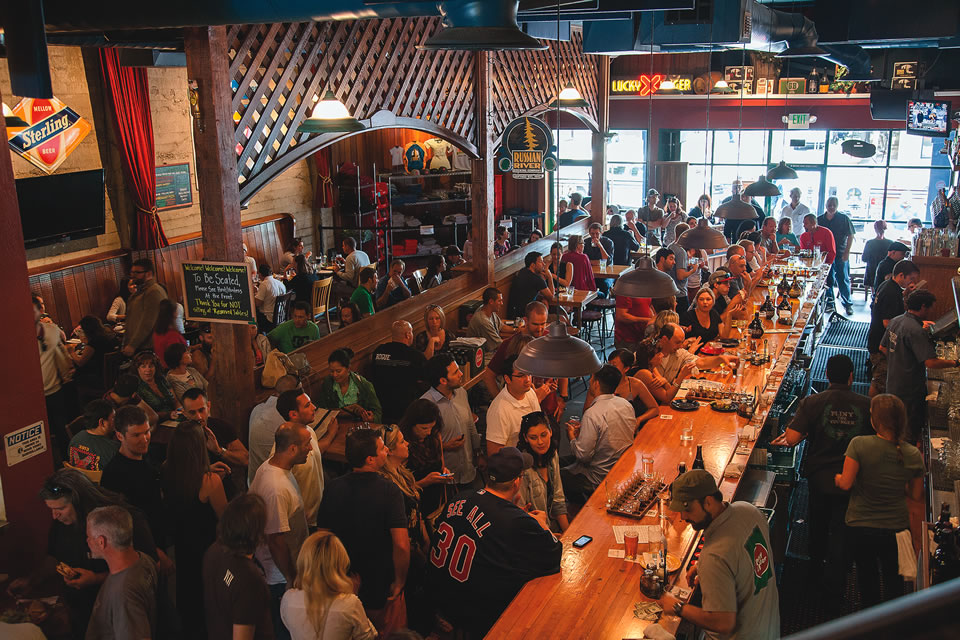 Creator of the once-a-year Pliny the Younger triple IPA, this Bay Area powerhouse has a range of aggressively hopped California ales, Belgian ales and barrel-aged varieties. The production brewery isn’t open to the public, but it’s worth a visit to the brew pub to try a selection of beers that are hard to find outside the region. The pub offers plenty of beer-inspired eats for those with an appetite; try a basket of Pliny bites, which incorporate Pliny the Elder into sliced pizza dough with white cheese and jalapenos. The recommended beverage is a 2-ounce pour of everything on tap, which could range from sour ales like the cabernet sauvignon barrel-aged Consecration to Damnation, a strong but smooth Belgian ale. Don’t forget to buy a case of the Elder for the road—distribution is highly limited.

A sustainable brewery, Hopworks uses organic malted barley, 88 percent of which is grown less than 300 miles away. An array of styles range from lagers to ales; a best-seller is the organic IPA, created with five hops that mingle with a solid malty flavor and strong overtones of pine and citrus. The seven-grain Survival Stout incorporates cold-press from another favorite Portland business—Stumptown Coffee—which lends hints of chocolate and a rich aroma. Hopworks’ 20-barrel facility produces a reported 12,500 barrels of beer per year, distributed only in Oregon, Washington, Idaho, Alaska, Hawaii, British Columbia and Alberta. Free Saturday afternoon tours conclude with two tastings; afterward, grab a bite (and a flight of up to 15 3-ounce samplers) in the family-friendly brew pub.

In the heartland of American beer, there’s a craft uprising that’s overtaken the likes of Budweiser, Miller and Pabst Blue Ribbon. Visit four modern-day masters—stretching from Wisconsin back up to Michigan—for an unforgettable taproom tasting. 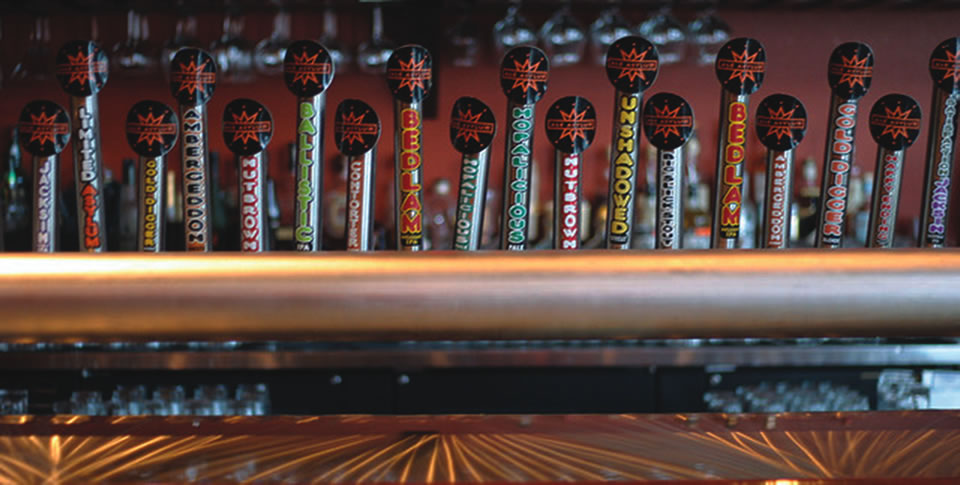 Ale Asylum is a popular pick in this small city that hosts a huge craft beer fest each summer; the brewery has a tasting room and six hourly tours held Sundays. The 30-minute group excursion costs only $5 and includes a pint of your choice along with a healthy sampling. Helping to draw crowds is the flagship Hopalicious, a bold American pale ale, as well as the fruity Bedlam Belgian IPA; like all of the year-round brews, both are available on tap and in six-packs only in Wisconsin and Illinois.

When Goose Island was sold to Anheuser-Busch in 2011, it left the city’s craft crown up for grabs. Enter Revolution Brewing, founded by a former Goose Island cellarman and brewer in February 2010. It produces approximately 50 different beer styles each year, including year-round ales like the Anti-Hero IPA—an assertive blend of four hops with a mild fruity sweetness to cut the bitter bite. Hopheads can make their way through the popular Hero series, which has American, black and imperial IPAs. Revolution operates a brew pub with a rotating tap list, but you can also take a complimentary tour Wednesday through Sunday of the Kedzie Avenue production brewery and taproom around 1.5 miles away. 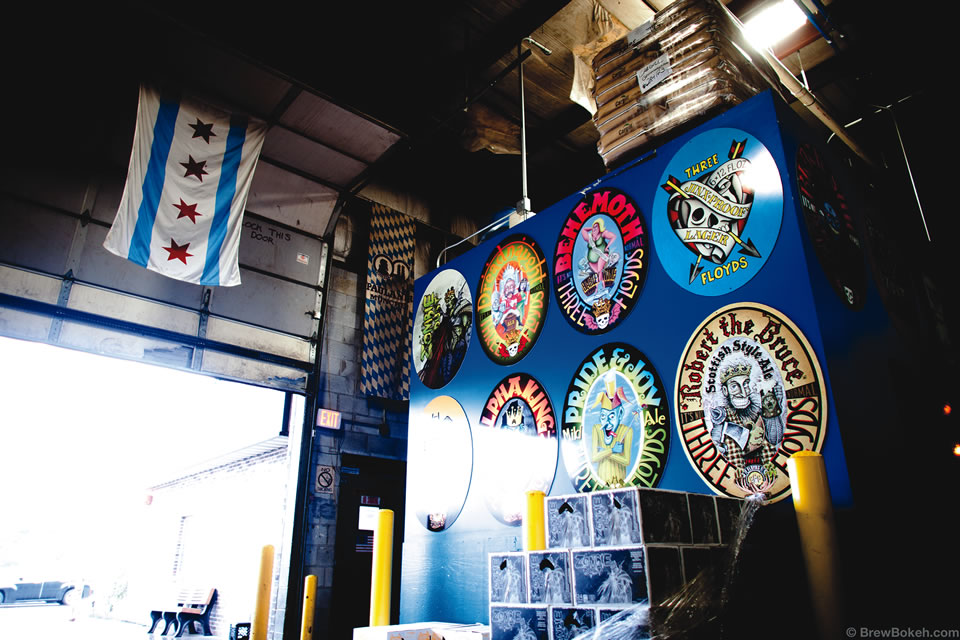 A menacing name doesn’t stop beer enthusiasts from gathering on Dark Lord day, the annual April celebration that serves as the only time of the year to sample Three Floyds’ storied Russian imperial stout. It’s just one gem in the brewery’s hop-happy treasure trove, however. Zombie Dust, an American pale ale, has an explosively piney flavor, while the flagship Alpha King offers a more balanced take on the style. Year-round, seasonal and pub-only brews can be enjoyed on tap, with tours offered Saturdays from 12:30 to 5:30 p.m. 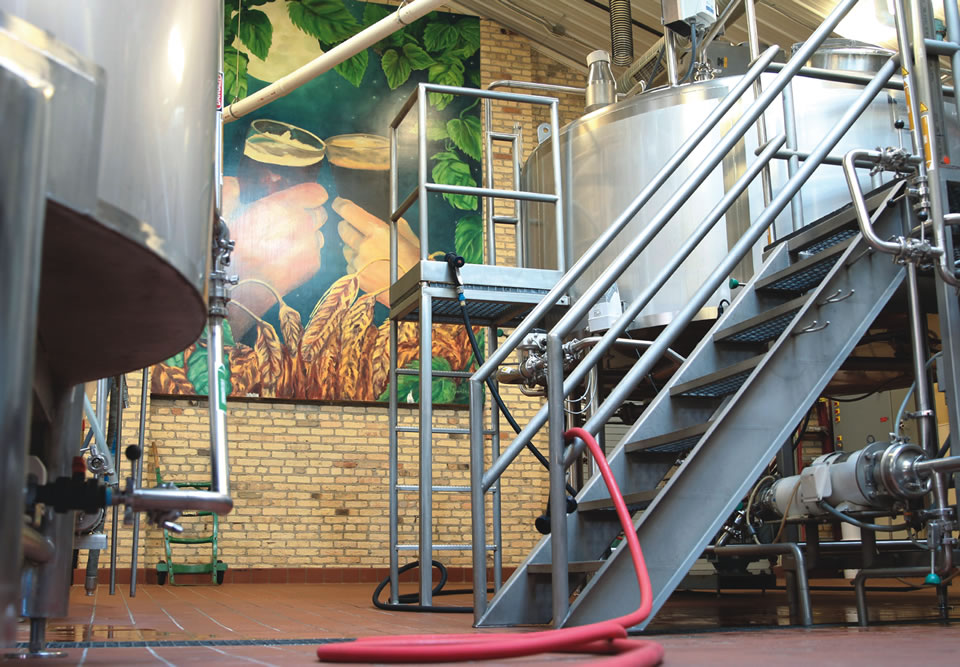 If three year-round, draft-only beers—Red’s Rye IPA, a nitro oatmeal stout and a nitro pale ale—aren’t reason enough to visit this Michigan brewery, come for the educational experience. Guided tours on Tuesdays and Saturdays can be enjoyed with or without tastings ($30 or $10, respectively). Meanwhile, a monthly Beer 101 class on every third Tuesday provides a $40 crash course for novices hoping to learn about the history, ingredients and brewing process, concluding with appetizers and a tasting. Enthusiasts with seasoned palates may opt for the $40 sensory evaluation class the second Tuesday of each month, which studies tasting techniques and what goes wrong with flavors in beer. Then, take a seat in the taproom for weekly live music and views of the brewing facilities.

When it’s not blanketed in snow, the Eastern Seaboard is a must-visit destination for discovering small-production breweries. Travel up the Atlantic coast this summer and hit four facilities known for refreshing sips and lively taproom experiences. 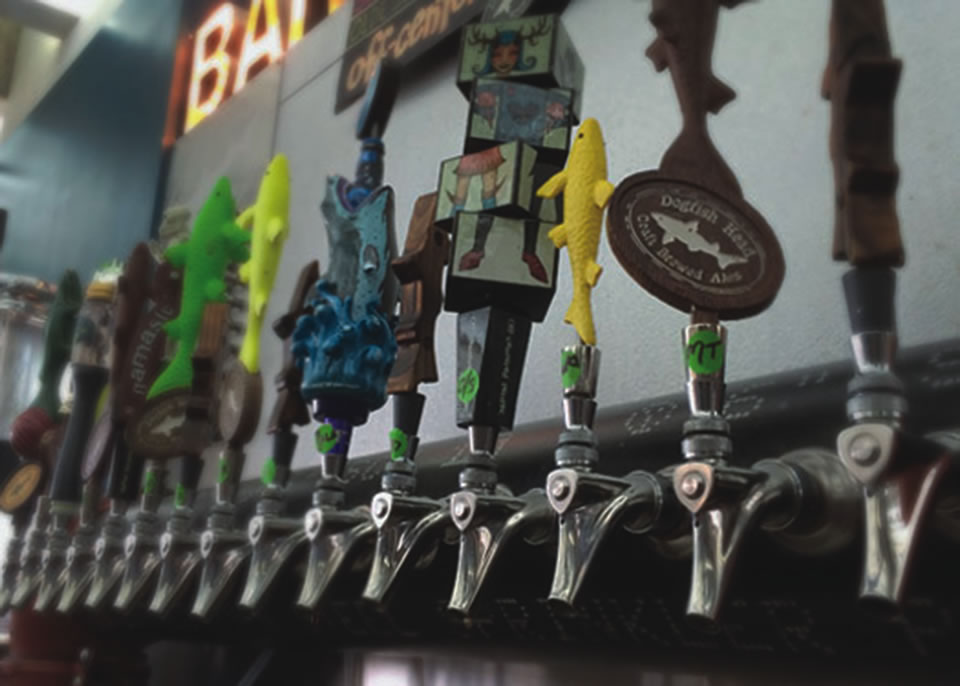 Dogfish Head is hailed cross-country for its specialty IPAs. The 90 Minute IPA, an American double that embraces an alcoholic bite, is enjoyed year-round. Summer visitors can sip its bigger, bolder brother, the 120 Minute IPA, which is released only twice a year (early spring and August through October). The warmer months also bring a neo-Berliner weisse, the Festina Pêche—fermented with an ale yeast that absorbs the natural peach sugars, it has a hint of the fruit to accompany the mouth-puckering tartness. Tours are offered Monday through Saturday at the Milton brewery; enjoy a free flight of four 3-ounce samples while you wait. Before you go, leave your mark on the tasting room—Dogfish Head welcomes visitor contributions to its “off-centered wall,” a collection of drawings, postcards, letters and other pieces that show how you march to the beat of your own drum.

Originally from Aspen, Colo., the award-winning Flying Dog now has a state-of-the-art facility nestled among Maryland’s wineries. The Raging Bitch Belgian-style IPA reigns supreme here—it’s one of the many regular brews on-tap that draws visitors from across the country. Monthly and limited releases keep things fresh and prove that the masters of this house have a focus on serious brews. Go behind the scenes with the experts for a $5 tour Wednesdays through Sundays—tickets are available on a first come, first served basis—or sample a selection in the taproom. 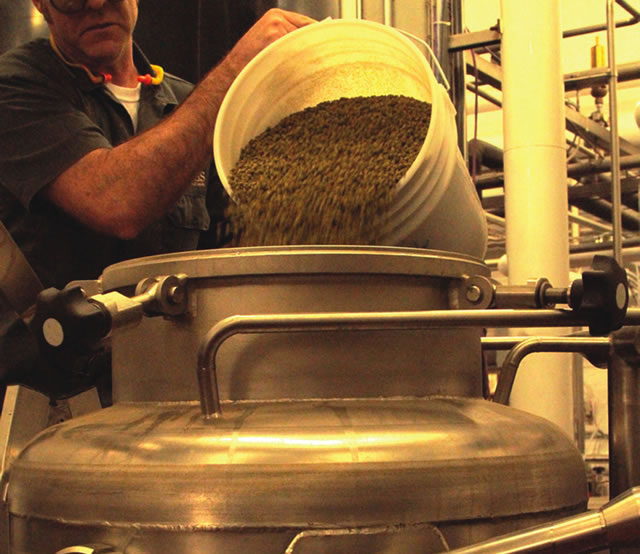 Helmed by two brothers, Tröegs offers six year-round beers, four seasonal varieties and two limited release styles, primarily available on the East Coast. Mainstays on tap include the Perpetual IPA, a smooth imperial style balanced with the aroma of hops and citrus, and the HopBack amber ale. Pay a visit to the brewery to sample these and more while taking a self-guided tour. Buy a glass of beer in the tasting room and wander at your leisure with the aid of helpful infographics and charts mounted on glass panes overlooking the facilities. Guided tours are also available for $5 and include a souvenir glass and three samples, plus the opportunity to try malted barley and a “green” beer from a fermentation tank while seeing the full production process. 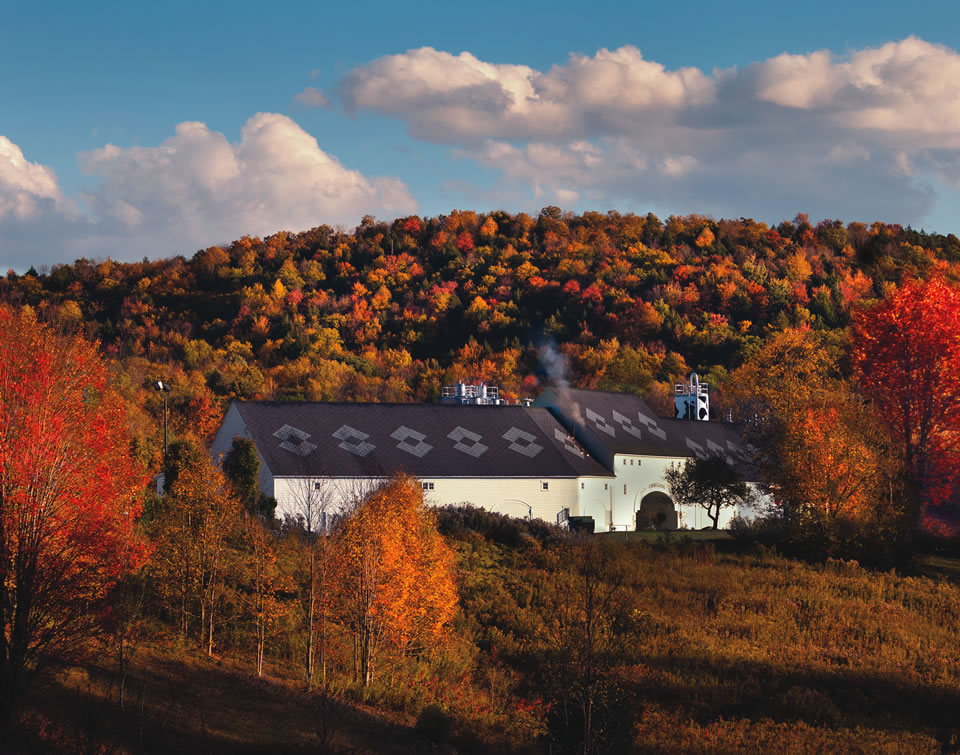 Late summer is an ideal time to visit this central New York brewery—Ommegang is throwing back to the 1990s for the annual Belgium Comes to Cooperstown fest. The themed event, held Aug. 7 and 8, introduces visitors to more than 300 rare Belgian ales from overseas and Belgian-style ales from North America. Tickets go on sale April 1 every year and sell out quickly—if you miss the festival, you can still take a short tour of the facility to learn the history of Ommegang and receive a brief overview of the facility. Tours are complimentary, but for $5 every half-hour, join in for a sampling of year-round beers and keep your tasting glass as a souvenir. Overnight guests can book a “bed and brew” package through the Inn at Cooperstown for a two-night stay, VIP guided tour and tasting, multicourse pairing meal, and transportation to and from the brewery. There are also concerts taking place throughout the summer, drawing big names such as Bonnie Raitt (Aug. 1).