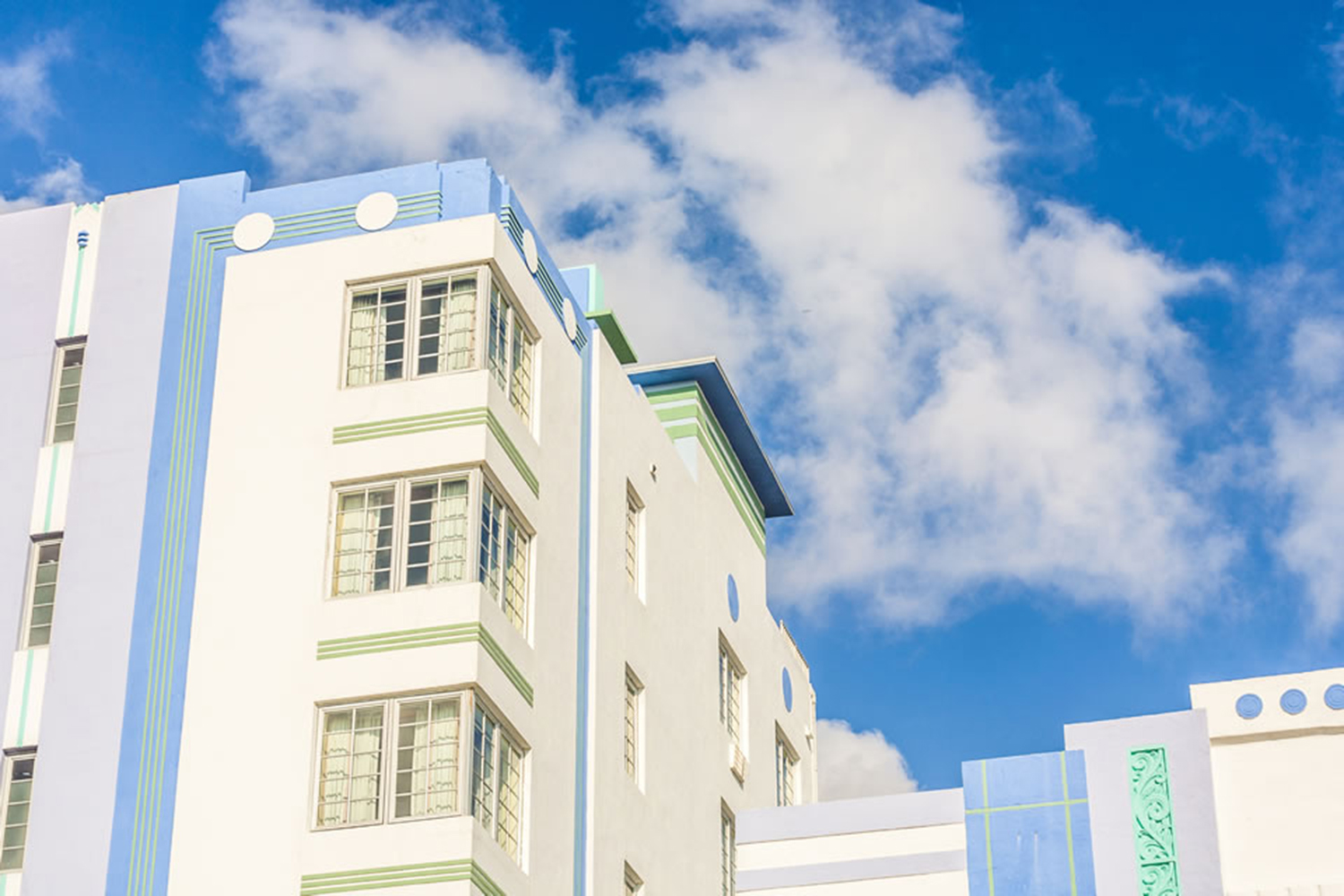 Simply put, Miami is a visually stunning locale. In addition to a vibrant public art scene and everlasting white sand beaches, it is shaped by more than 800 structures rich with history in an area known as the Art Deco District. The neighborhood, which is roughly bounded by the Atlantic Ocean on the east, Alton Road on the west, Dade Boulevard to the north and Sixth Street to the south, is comprised of buildings that stem from Miami’s rapid development in the heyday of its tourism boom during the late 1920s through the 1940s.

The art deco style took over the streets in the 1930s, as architects and other notable names constructed their buildings with an emphasis on symmetrical framework and geometric forms like chevrons, spheres and rectangles. Other hallmarks of the style that began popping up in Miami included neon-lit facades, nautical porthole windows and smooth concrete surfaces.

Today, the intricate details can still be found in the candy- and pastel-colored hotels, cafes, movie theaters and residences that dot Miami Beach. And thanks to preservation efforts from local and national organizations, these architectural gems will shine for generations to come. 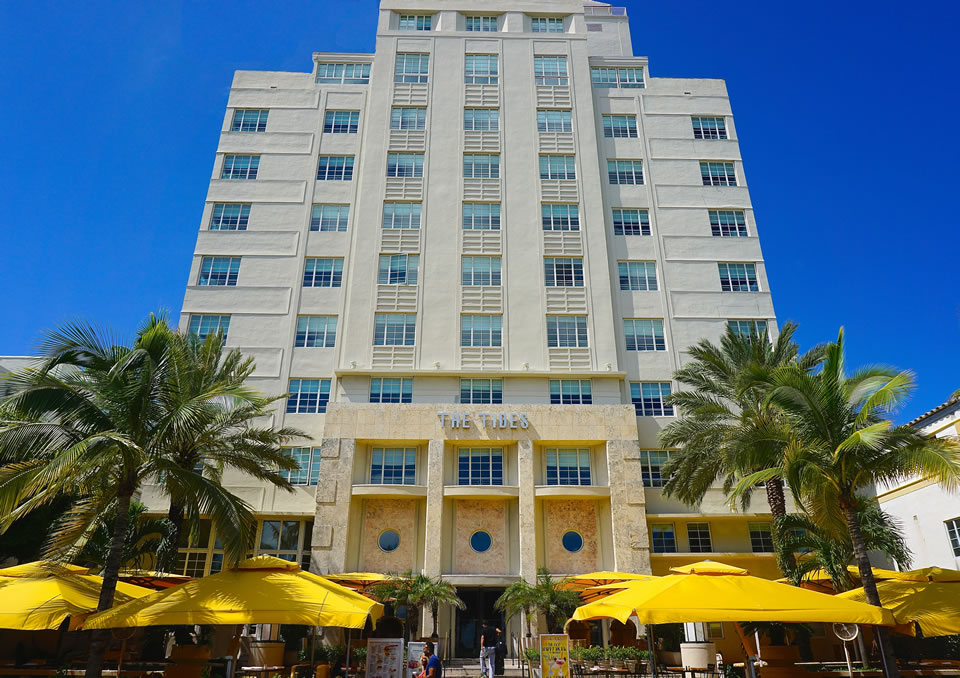 Located at 1220 Ocean Dr., The Tides South Beach was the tallest building in Miami when it was built in 1936. Its height wasn’t the only reason it captivated passersby. Art deco master L. Murray Dixon designed The Tides hotel to imitate the sleek lines of the automobile and airplane technologies that were taking over in the 1930s. The monolithic structure is a symmetrical block with a center strip that protrudes from the rectangular surface, accentuating its flat rooftops and sharp corners. At the ground level, The Tides’ porthole windows mark the entrance to a completely remodeled interior. The lobby features gold tufted couches, a metallic spiral chandelier and a pastel mural to evoke its original era. The glamour continues in the guest rooms with geometric furniture, patterned rugs and midcentury-inspired room dividers surrounded by sunburst wall decor. And even the outdoor pool area nods to art deco with chevron walls and a porthole mirror covering the cabanas.

Henry Hohauser was one of the principal architects responsible for Miami’s art deco design palette. He applied his own twist to the style by emphasizing windows and playing with the facades in order to echo the ocean. In 1939, he built a hotel on Collins Avenue that is now a 20,000-square-foot fashion emporium opened in 2009 by French founders Laure Hériard Dubreuil, Frederic Dechnik and Milan Vukmirovic. The Webster boasts three stories stocked with apparel ranging from luxury sportswear to couture outfits for men and women. The top level also provides gallery, office and event space for pop-up shops and fashion shows.

In order to preserve its original design, the staircases, ceilings and the lobby’s terrazzo floor were restored, and there are 1930s motifs throughout the space. Meanwhile, the exterior shines with neon lights on the edges of the building as well as in the marquee. Finally, the perfect symmetry of the windows and the ornate details that form a border in the center of the facade offer a prelude to the sophistication to be experienced while shopping inside.

At the intersection of 11th Street and Washington Avenue, there’s a parked trailer that has been in place since 1992. The portable structure is a Paramount dining car built in 1948, which originally served Wilkes-Barre, Penn., as a diner. Around 40 years later, it was dismantled and found its new home in Miami’s Art Deco District, where its gleaming stainless steel exterior and neon signage fit in perfectly with the surrounding buildings.

After a renovation to restore it to its original art deco style, today the 11th Street Diner is a 24-hour eatery, popularly frequented by late-night visitors. A specialty menu available from 11 p.m. to 6:30 a.m. offers sandwiches, burgers and, of course, breakfast dishes like corned beef hash and omelets. In 2008, the diner appeared on the Food Network’s “Diners, Drive-Ins and Dives,” as host Guy Fieri enjoyed a plate of the apple and raisin pork chops.

The entertainment industry has been an important part of the overall culture in South Beach since the 1930s. One of the most popular venues to watch a film was the Colony Theatre on the corner of Lenox Avenue and Lincoln Road. Built by architect R.A. Benjamin, the space opened in January 1935 as part of the expanding movie theater chain owned by Paramount Pictures.

In the mid-1970s, the movie palace turned into a mid-sized performance venue to accommodate more than just movies. As the years went by, the structure fell into disrepair until a renovation project was approved in 2002 and completed in 2006. Now a fully restored 415-seat venue, the theater’s lighted marquee and geometric flooring evoke art deco glamour. The $6.5 million project also included pristine terrazzo floors and a new entryway framed by bold lines in the awnings.

Located in the heart of South Beach, it is the perfect host to film festivals, a Broadway series, comedy acts and concerts annually. This spring, Florida Grand Ballet will present the world premiere of “Anna Karenina,” a production based on the novel by Russian author Leo Tolstoy that tells the tragic affair of a married woman who falls in love with another man, on April 10 at 8 p.m. 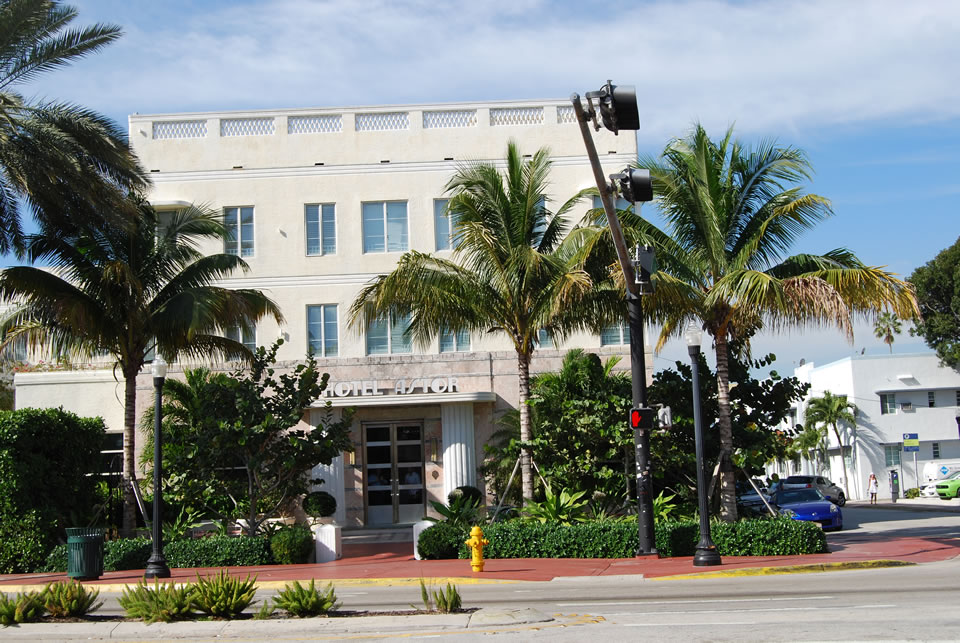 When taking a stroll along Washington Avenue, one of the many hotels that demands attention is the magnificent Hotel Astor, built in 1936. “The front facade has a lot of oolitic limestone, which is naturally occurring in Florida, so it was an inexpensive building material, but it’s been treated so it’s got a pinkish hue that looks like Italian marble,” explains Judith Frankel, director of programs and outreach at MDPL, of the interesting exterior.

A glowing sign that reads the hotel name complements the stainless steel door with eight square windows that offer a peak inside. Once indoors, the art deco splendor continues. The lobby has very era-specific details, including the original terrazzo floors and Vitrolite wall panels as well as furniture in pastel hues like mint and yellow.

The boutique hotel also mixes modern and retro at its latest dining venture called The Downstairs. The lounge offers a creative menu of cocktails and inventive fare. In the background, musicians perform during themed evenings. Be sure to attend on a Tuesday night when 1920s jazz and blues recalls the music of yesteryear.