The Remington Bar remains a timeless tradition for Houston residents, as well as the city’s visitors, with The St. Regis Houston’s renowned bartender serving up classic drinks with a Texas twist. 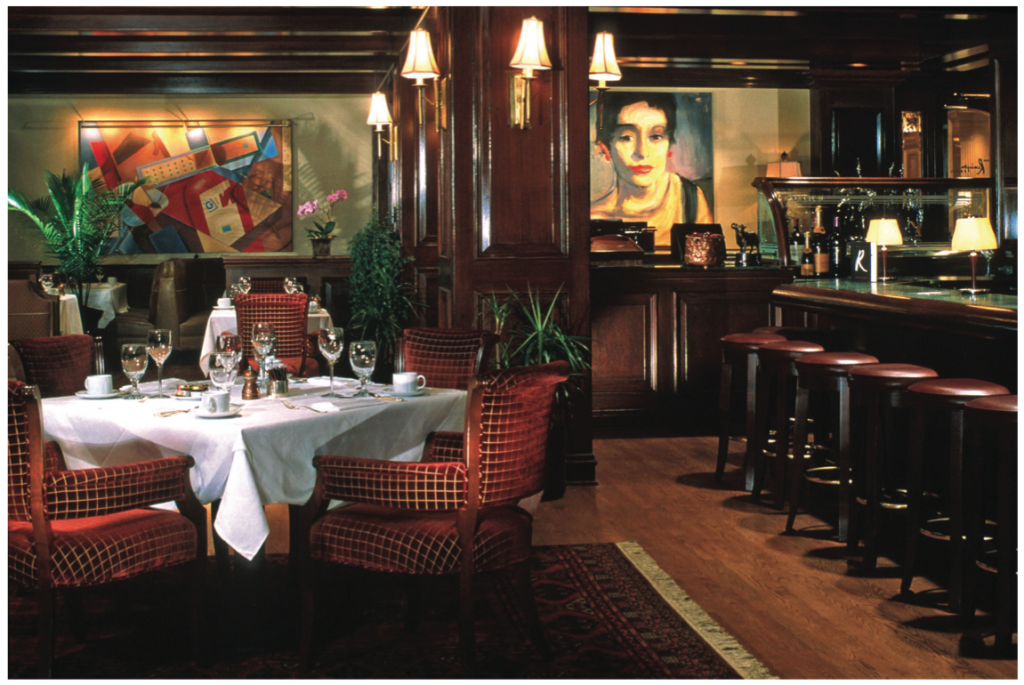 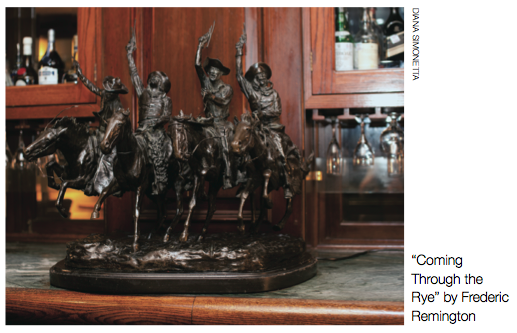 A true gem nestled in The St. Regis Houston, The Remington Bar offers a friendly sophistication with an ambience that suggests a certain timelessness. With its rich wood paneling, contemporary paintings and Southern motif left over from its Remington Hotel days, the venue provides ambiance and elegance to all its guests. During the week, The Remington Bar predominantly welcomes business clientele, but on the weekends the bar transforms into a hot spot for travelers and locals alike.

“Coming Through the Rye,” a massive, 800-pound bronze sculpture by Frederic Remington, remains behind the bar, its home since the Remington Hotel’s inception in 1982.

For over a decade, the band Commercial Art has entertained guests on Friday and Saturday nights with its eclectic mixture of pop, funk and Cuban music, drawing everyone onto the dance floor until the early morning hours.

It is the service, however, that truly sets The Remington Bar apart. A fixture behind the bar, beloved head bartender Harry Spitzer has entertained guests with his delectable cocktails and conversations since 1994.

Originally from Chicago, Spitzer moved to Houston in 1975 when his father accepted an engineering job in the city. He originally enrolled at the University of Houston to continue his studies in denistry, but Spitzer found his true calling as a bartender. Houlihan’s, a contemporary restaurant chain, had an opening for a part-time weekend bartender. Spitzer accepted the position, not knowing at the time that his weekend job would become a lifelong pursuit. 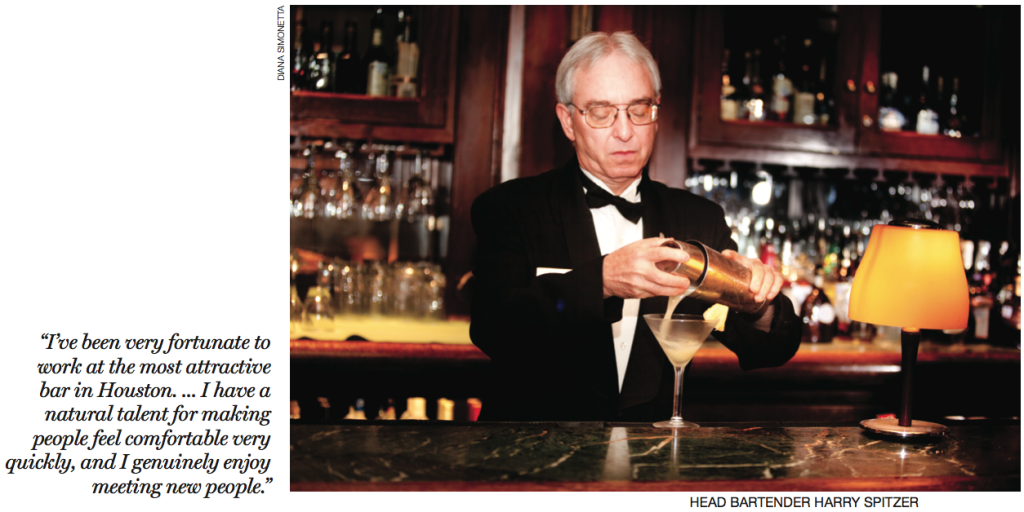 Within a few months, Spitzer began working full time for the restaurant as its premier bartender. He delighted patrons with his innate ability to connect with them on a personal level and awed them with his penchant for creating their favorite drinks. When the restaurant closed in 1994, some of his clientele suggested he contact the hotel, which immediately recognized his outstanding reputation and hired him. For 18 years, Spitzer has provided a bespoke experience to everyone who has entered The Remington Bar at The St. Regis Houston.

“I enjoy interacting with people I don’t know,” Spitzer says. “I’ve been very fortunate to work at the most attractive bar in Houston and I get excited every time I come into the hotel. I have a natural talent for making people feel comfortable very quickly, and I genuinely enjoy meeting new people.”

Spitzer’s expertise has earned him various accolades over the years. In 1997, he was awarded Employee of the Year and has been nominated three or four times more for his exceptional commitment to service. In 2000, Houston Press named his creation, “The Twister,” as Houston’s Best Martini. In 2007, Spitzer received a nomination from his peers for outstanding job service in food and beverage through the Hotel and Lodging Association of Greater Houston for Annual Excellence in the Hospitality Industry Awards. Most recently, in 2012, Nxtbook Media recognized Spitzer in its Virtuoso Best of the Best 2012 Guide to the World’s Best Hotel Experiences.

Despite his numerous honors, Spitzer remains humble. “I’ve always tried to maintain a sense of perspective,” he says. “I love the bar and I love the hotel. I’m very dedicated to both. My goal is to provide an environment of comfort to people from all walks of life. I don’t look at the awards or drinks I’ve created as a big deal. My main goal is to do a good job behind the bar and make it look flawless.”

And a flawless performance Spitzer delivers every time. Although a talented mixologist, Spitzer maintains that his true talent lies not in his verve for inventing new drinks, but in his interaction with the guests. “I want to make our guests feel as if they are drinking in their own living rooms,” Spitzer says. “Being a mixologist has never been my forte. To me, being a bartender in a five- diamond hotel is more important. Whether the guest is the CEO of a Fortune 500 company or a schoolteacher, I’m most proud of the friendships I’ve had with hotel guests. People can come back year after year and know I’m behind the bar.” 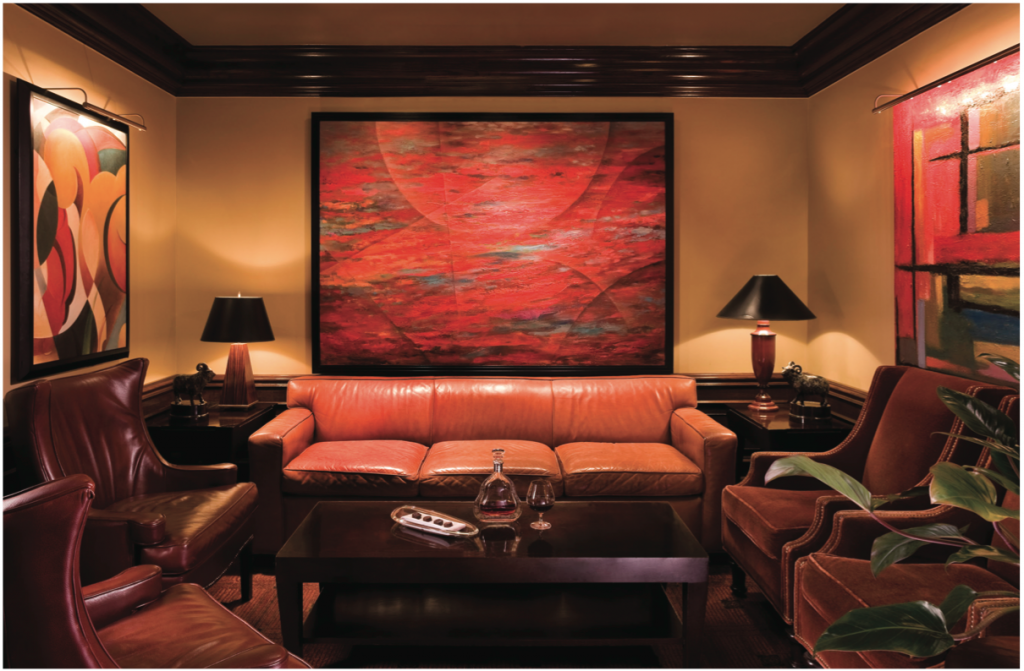 Because Spitzer contends that his main focus remains on his guests, even his art as a mixologist includes communal involvement. “When creating a new drink, you have to interface between reality and fantasy,” Spitzer says. “I start with random thoughts, and slowly a new drink evolves. It’s always an ongoing process.”

In 2007, each St. Regis hotel and resort was tasked with creating its own version of the signature cocktail of the St. Regis: the bloody mary, created by The St. Regis New York bartender Fernand Petiot in 1934. Spitzer’s creation, Harry’s Texas Bloody Mary, lends a spicy Tex-Mex flavor to the established tradition. With Patrón Silver tequila, jalapeño peppers and Cajun seasoning, Spitzer introduces guests to his fiery interpretation of the classic cocktail.

Spitzer says that it took him 10 years to perfect the Harry’s Texas Bloody Mary mix. By talking to guests and people around the world, he was able to identify the key components needed to perfect his recipe and make it remarkable. “When you get to a certain level of bartending,” Spitzer says, “less is more. I love making traditional drinks enjoyed by all generations. People enjoy my simple take on tradition.”

Although Spitzer doesn’t consider himself a mixologist, he frequently produces new additions to The Remington Bar’s menu. Another increasingly popular drink, The White Rose, entails mixing one- third Godiva White Chocolate Liqueur with two- thirds Tequila Rose, a strawberry cream liqueur. Spitzer’s reputation as a pioneer in the industry brings him praise and rave reviews. In March 2012, Spitzer was asked to fashion a cocktail to introduce the fifth season of “Mad Men,” AMC’s award-winning television drama set in the early 1960s about one of New York’s most prestigious ad agencies. For his role, Spitzer introduced his take on The Old Fashioned: Man About Town. Spitzer’s cocktail involves muddling oranges and maraschino cherries with sugar, adding a dash of bitters and substituting vodka for bourbon.

In the spirit of tradition, The Remington Bar serves top-shelf liquor and wine by the glass, half bottle and bottle. Some of the finest offerings include cognac such as Louis XIII by Rémy Martin, Grand Marnier Centenaire and Grand Marnier Cent Cinquantenaire and a full complement of Rémy Martin XO cognacs; single-malt scotch such as Glenlivet XXV and Macallan 25; and whiskey such as Johnnie Walker Blue Label. 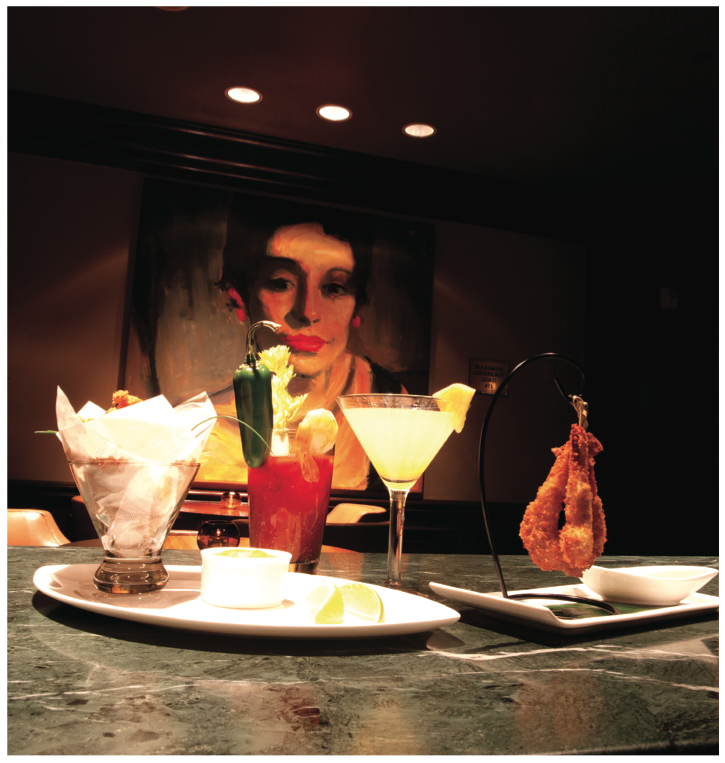 With vast applause bestowed on Spitzer over the years, it’s hard to believe he remains exceptionally modest. Spitzer embodies the St. Regis creed: He holds dear everyone who enters The Remington Bar and wants nothing more than to offer an incredible, unique experience for every person he meets.

“My job to me is to be behind the bar, focused on who’s at the bar,” Spitzer says. “I am a representative of the finest hotel in Houston.”

Regardless of whether a guest enjoys afternoon tea in the Tea Lounge or a nightcap in The Remington Bar, it is the personalized encounters with hotel staff that resonates. Just as the tradition of afternoon tea continues with each new generation within a family, celebrating birthdays, anniversaries and other milestones at The Remington Bar serves as a right of passage with families as well.

“People consider me a part of their extended family,” Spitzer says. “People like the idea of being noticed—of being remembered—and I have an innate ability to do that. I remember faces, names and drinks. We have guests who bring their children here on their 21st birthdays. Now

“While The Remington Bar welcomes guests from all walks of life, including locals to Houston, many of our guests are business travelers,” Spitzer says. “People that travel have a lot of stress in their lives. They want a confident bartender that gives them what they want. While some venues create unique cocktails, the St. Regis is based on tradition.”

It’s Spitzer’s love for The Remington Bar and passion for The St. Regis Houston that drives his professionalism. It’s often said that bartenders are like therapists, thus bartenders must possess certain qualities to succeed. Spitzer says it’s important to be a renaissance man, be patient around people, have an innate ability to bartend and an interest in expanding clientele.

“The hours are long and you work until 2 or 3 o’clock in the morning,” he adds. “You have to be passionate about your job and the guests. … I can’t imagine doing anything else.” 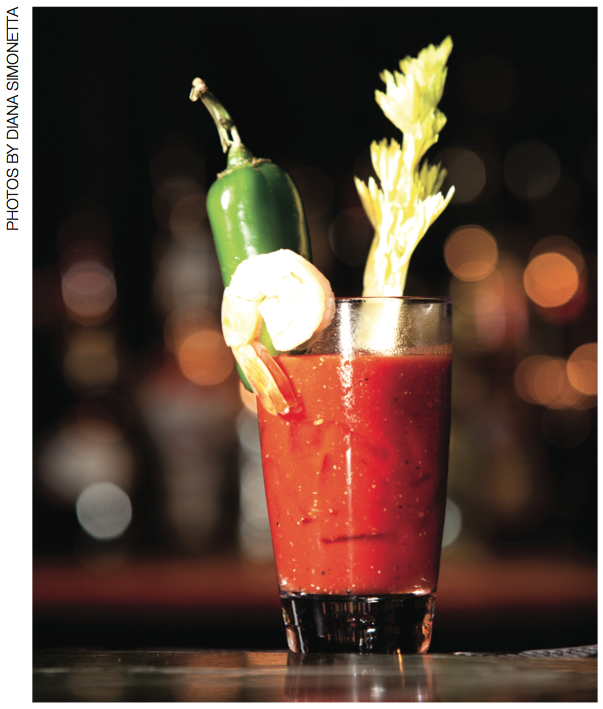 The Twister appeals to all palates. Created over the course of a weekend, its simple but smooth tropical taste provides the perfect balance to any social gathering. Combine 1.5 ounces of Ketel One Citron vodka, a small splash of sour mix and a long splash of pineapple juice in an ice-filled shaker. Shake vigorously and pour into a frozen martini glass.